Yves here. This study is useful because it tests and confirms some widespread intuitions: that more aggressive Covid containment measures reduce contagion levels, and that the degree of connection between high infection areas (which skew Republican) increases infection among them and also generates net spread to lower infection states.

Balancing the trade-off between strict public health measures and economic activity has been the key concern for governments since the Covid-19 outbreak.  While strict measures impose high economic costs, they may play an important role in containing the spread of the virus, and consequently in preventing a more prolonged and costly reduction in economic activity (Furman 2020, Odendahl and Springford 2020). In the case of the US, the federal government showed a lax response to the pandemic, focusing on the economic impact rather than the rapidly increasing cases of Covid-19 and the death toll.  The resulting public debate politicised the federal and state-level public health policies and led to the formation of demarcation lines across the party lines in a year of presidential elections.

In a new paper (Akovali and Yilmaz 2020), we study the substantial differences in state-level responses leading to a wide variation in the new Covid-19 case trajectories across the country. Our work adds to the recent literature by demonstrating the close association between government policy and community mobility responses to the pandemic and the trajectories of new Covid-19 cases as well as their connectedness/spillovers across the US.

In a next step, we use panel regression analysis and find that the strict public health policy implementation by state governments was critical for containing the virus. Panel regression results also reveal that the changes in community mobility patterns played a crucial role in the containment of Covid-19 cases. States with Democratic governors (blue bars) overwhelmingly followed more stringent (above the national average) policies to contain the virus. In contrast, the majority of the states with Republican governors (red bars) followed less stringent (below the average) policies (Figure 2).

Even though the community’s use of public spaces can be influenced by strict public policy measures, this also depends on the local community’s awareness of the risks involved. Therefore, it is worth focusing on the changes in the state-level community mobility patterns in response to the pandemic.  The average mobility indices for the two groups of states in Figure 4 (panel a) depicts a picture similar to the one for the policy stringency index in Figure 2.   Communities in states with Democratic governors decreased their use of public spaces more than communities in states with Republican governors. This difference persisted until the end of the sample on 23 October.

Within and Between Connectedness Dynamics across Democratic and Republican States

The absence of leadership from the federal government resulted in relatively high rates of Covid-19 cases in many states. Moreover, the substantial variation in public health policy measures across states fostered the transmission of Covid-19. In a time-series context, a connectedness analysis (Diebold and Yilmaz 2014) is a useful tool to estimate the transmissions when structural models are not readily available. The connectedness of case growth provides further empirical evidence on the dissociation between the pandemic’s course in states along the party lines. 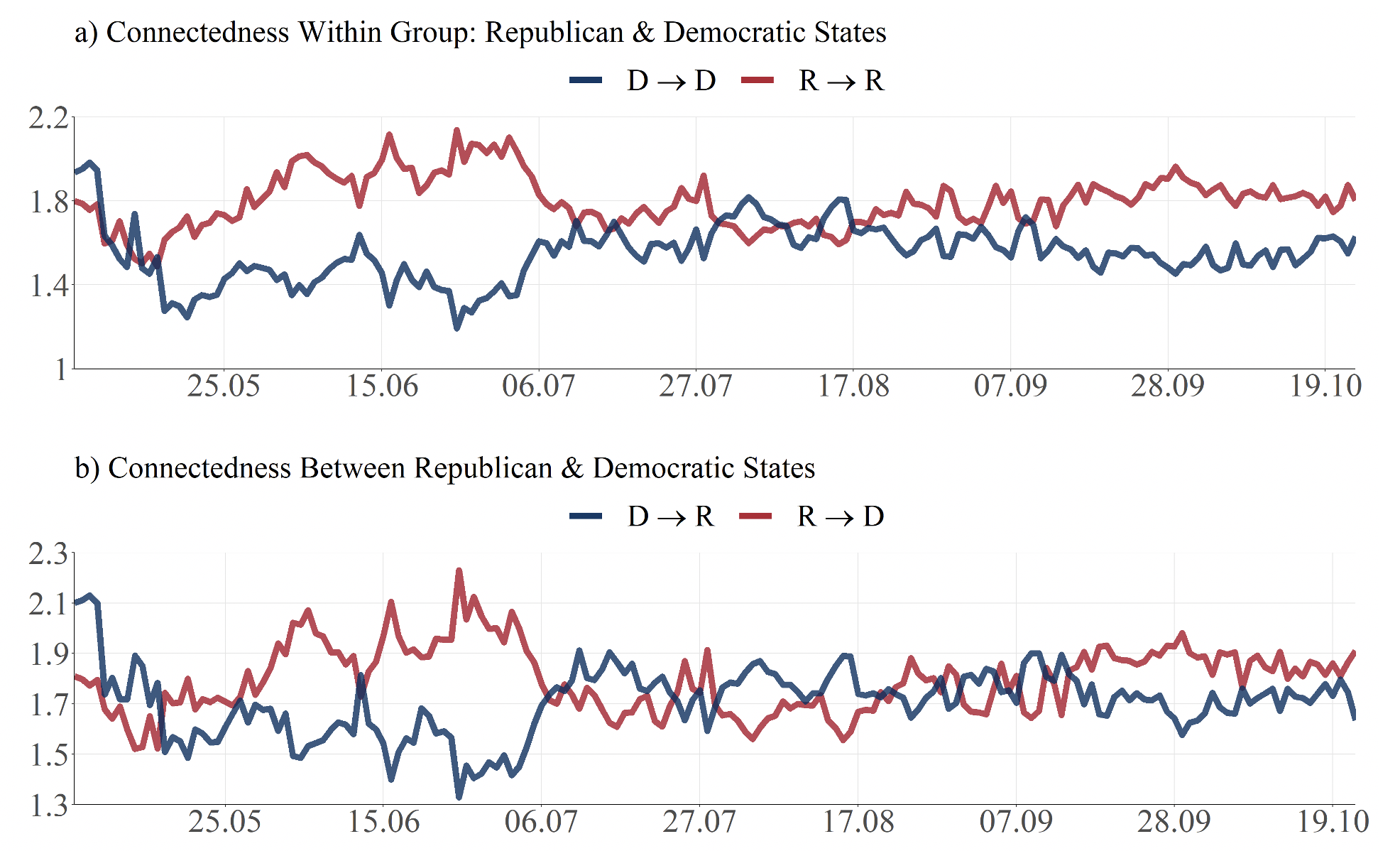 We show that politicised responses to the coronavirus pandemic contributed to the spread of the virus across US states. We further find that strong government and community responses were effective in reducing the number of Covid-19 infections and lower the connectedness of Covid-19 cases across states. Finally, we conclude that unless the federal government starts implementing stringent public health policies at the national level and coordinating state-level policies, controlling both Covid-19 cases and their connectedness across states will remain challenging.