Yves here. Similar to the way Covid dislocations are hitting the poor the hardest and benefitting the wealthy, Brexit is also projected to increase inequality. Welcome to disaster capitalism.

On 31 January 2020 the UK formally left the EU after over 40 years of membership. On 31 December, the UK’s transition period will come to an end and the UK and EU will establish a new trading relationship with greater trade frictions. At the time of writing, the terms of this relationship remain unclear. However, since the EU is by far the UK’s largest trading partner, the implications for the UK economy are likely to be profound. This column discusses potential consequences for the labour market – and earnings inequality – in the UK.

Brexit will fundamentally reshape the UK’s relationship with the EU – it’s most important trading partner. In 2019, the EU accounted for 43% of the UK’s exports and 51% of its imports (House of Commons Library 2020). When the transition period for the UK’s post-Brexit trading relationship with the EU comes to an end on 31 December 2020, EU-UK trade will be impacted by customs checks, regulatory differences, and potentially new tariffs on some goods. These increased trade costs will affect many economic outcomes, including aggregate GDP (Dhingra et al. 2016), prices (Clarke et al. 2017), aggregate employment in different countries (Vandenbussche et al. 2017), foreign direct investment (Breinlich et al. 2019) and employment in specific industries (Head and Mayer 2017).

In a recent paper (Griffith et al. 2020) we consider the likely impact of these changes on relative earnings. We use detailed individual- and household-level data to document how the potential effects of these new trade barriers are likely to differ across individual workers and households. We focus on the relative impacts, setting aside Brexit’s other impacts on productivity, investment and immigration.

Which Workers Are Most Exposed to New Trade Barriers?

Individual workers could in principle be affected in a number of ways. Most obviously, increased trade barriers will increase the costs of importing inputs from the EU and exporting output to the EU in the industries they currently work in. Industries can be affected directly (by trade barriers applying to their own sales and purchases) and indirectly (through trade barriers affect their suppliers and customers). We calculate the likely change in trade costs for different industries under a ‘no-deal’ Brexit in which the UK leaves the EU without a formal trading agreement so that WTO rules apply. These are shown for different industries in Figure 1. 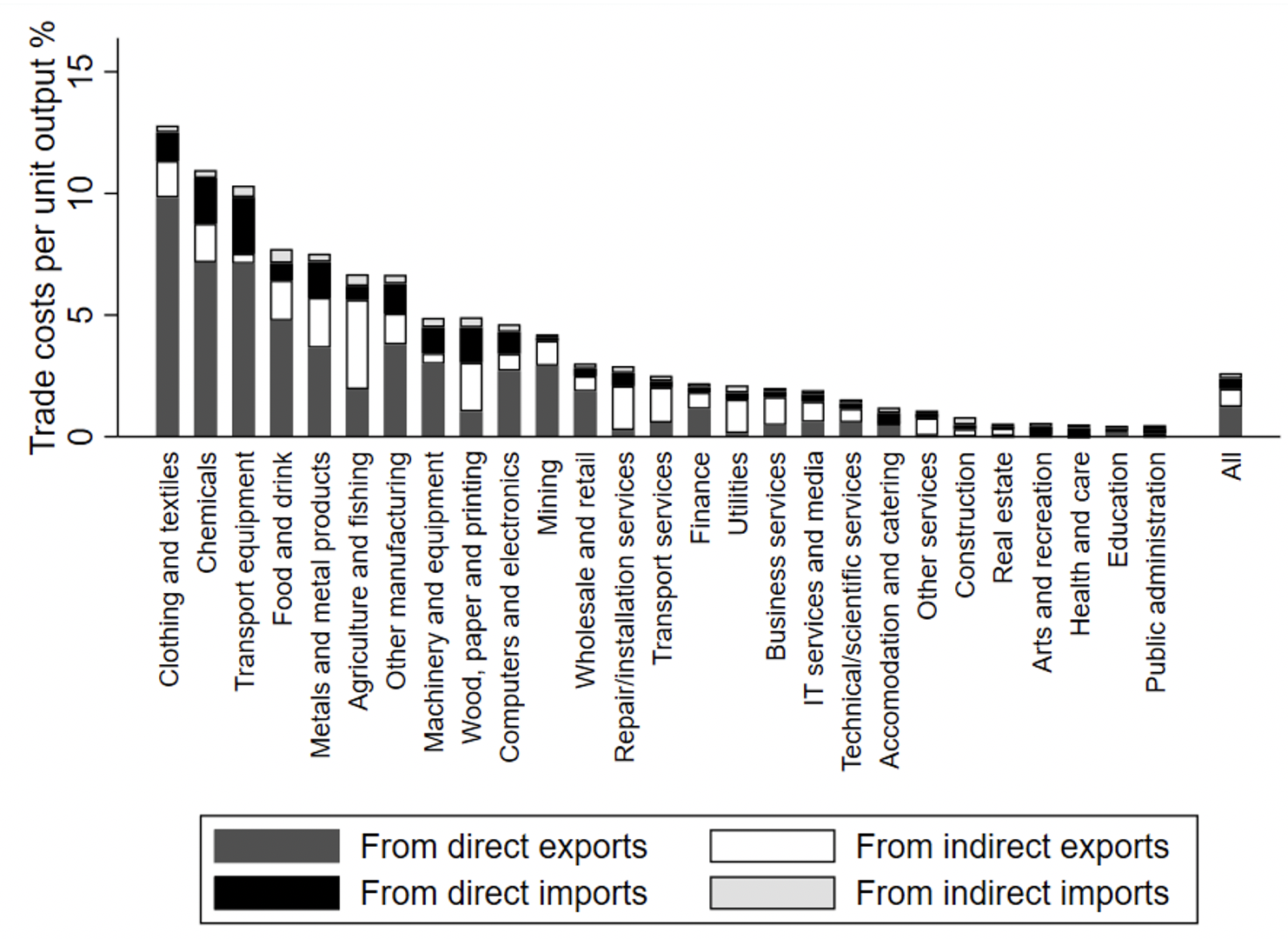 Note: See Griffith et al. (2020) for assumptions on tariff and non-tariff barriers and other details.

The trade costs shown in Figure 1 give a measure of workers exposure to new trade barriers based on current employment and trade patterns (we call this ‘ex-ante exposure’). It suggests that UK workers in goods industries that include clothing, chemicals and transport equipment are most exposed to new trade barriers with the EU. However, the ultimate exposure will also depend on a number of other factors, including both the responses of firms and consumers in the UK and abroad to shifts in relative wages and prices, and the outside options of workers in the labour market (such as whether there are similar jobs in their local area).

To understand the potential importance of the responses of workers and firms in mediating the impacts of new trade barriers, we construct a ‘response-inclusive’ measure of the exposure of workers. This is exposure predicted by a simple model of labour demand for workers in different occupations that takes account of some aspects of the structure of the local labour markets. We assume that workers are mobile across industries but immobile (at least in the short run) across occupations and regions. We calculate this measure on the basis of various assumptions on the likely scale of demand responses taken from the literature. Since many of these are uncertain, we also examine the sensitivity of our results to different assumptions.

Our response-inclusive measure suggest that the largest impacts are amongst blue-collar workers (machine operatives and those in skilled trades). This is because these workers are much more likely to be employed in tradeable manufacturing industries that export a lot to the EU. These workers also tend to have fewer outside options in their local labour markets, as other industries that employ workers in their occupations tend to also be exposed to new trade barriers. These workers are disproportionately likely to be male, located in the upper middle of the earnings distribution and not to have a university degree.

To illustrate the impact of how new trade barriers from a no-deal Brexit might affect earnings inequality, Figure 2 plots the distribution of workers’ exposure across the earnings distribution. Both measures suggest that workers in the middle of the earnings distribution have the highest exposure, since this is where blue-collar manufacturing workers tend to be located. Ex-ante exposure is also high for some workers at the top of the earning distribution – these workers are also relatively likely to be employed in highly exposed industries. However, they appear less exposed when we account for worker and firm responses (as reflected in their lower response-inclusive exposure). This is because higher-earning white collar workers (such as managers) tend to have good outside options in less-exposed sectors. This is consistent with evidence from previous trade shocks; higher-earning workers tend to fare better following increases in import competition for example – partly because they are more able to shift into less affected industries (Autor et al. 2014). 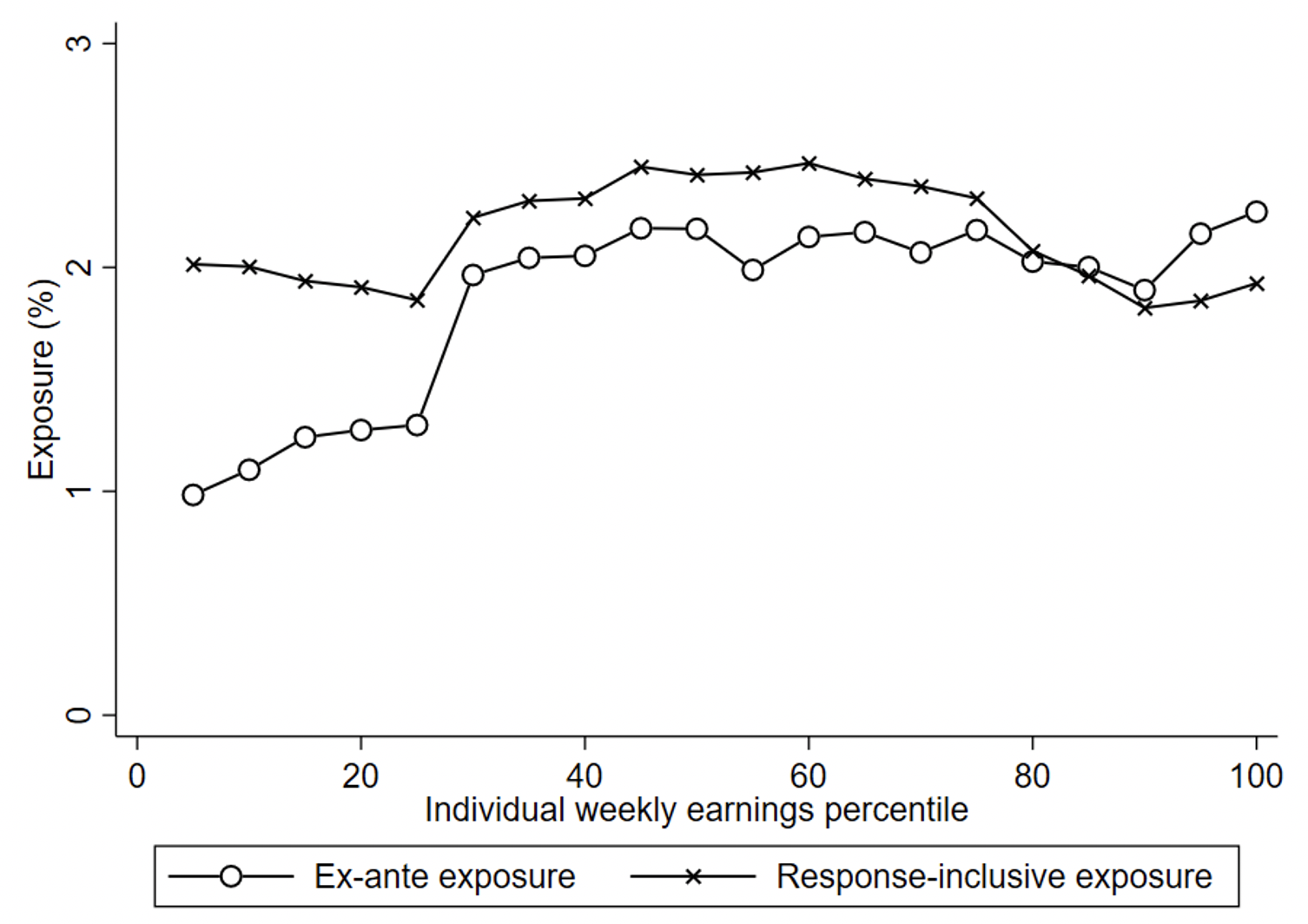 Source: Authors’ calculations from 2016 Annual Survey of Hours and Earnings and 2016 Business Structure Database.
Notes: Ex-ante exposure is defined as the sum of new tariff and non-tariff barriers that would apply to exports to the EU and imports of intermediate inputs from the EU under a `WTO rules’ Brexit (as a percentage of UK value-added) in each worker’s main industry of employment. Response-inclusive exposure is the output of the model outlined in Griffith et al. (2020). It varies by workers’ region and across nine occupation groups. We smooth by plotting average exposure within five percentile bands.

Figure 2 tells us about the potential implications of new trade barriers for inequality among individuals. However, welfare impacts will also depend on the exposure of other members of a worker’s household. The measures of individual exposure will understate the likely impact of increased trade costs on their welfare if live with a worker who is also employed in a highly exposed occupation, but overstate it if other members of the household are less impacted and hence provide them with insurance (Blundell et al. 2016).

Figure 3 shows household exposure (using our response-inclusive measure) to new trade barriers alongside individual exposure across the earnings distribution. We calculate household exposure as an earnings-weighted average of workers’ own exposure and their partners’ (for those who have one). As we already saw in Figure 2, workers at the bottom of the earnings distribution (typically female) tend to be less exposed to new trade barriers as individuals. However, since these workers are more likely to be partnered with more exposed (and typically male) blue-collar workers, they are also quite likely to be in more exposed households.

Thus, while low-earning workers may not themselves be exposed to the increase in trade barriers associated with Brexit, they may be indirectly affected through impacts on their partners and thus on household income. This is particularly important for understanding the pattern of exposure by gender; accounting for partners’ exposure tends to mitigate overall exposure for men, but to exacerbate it for women. 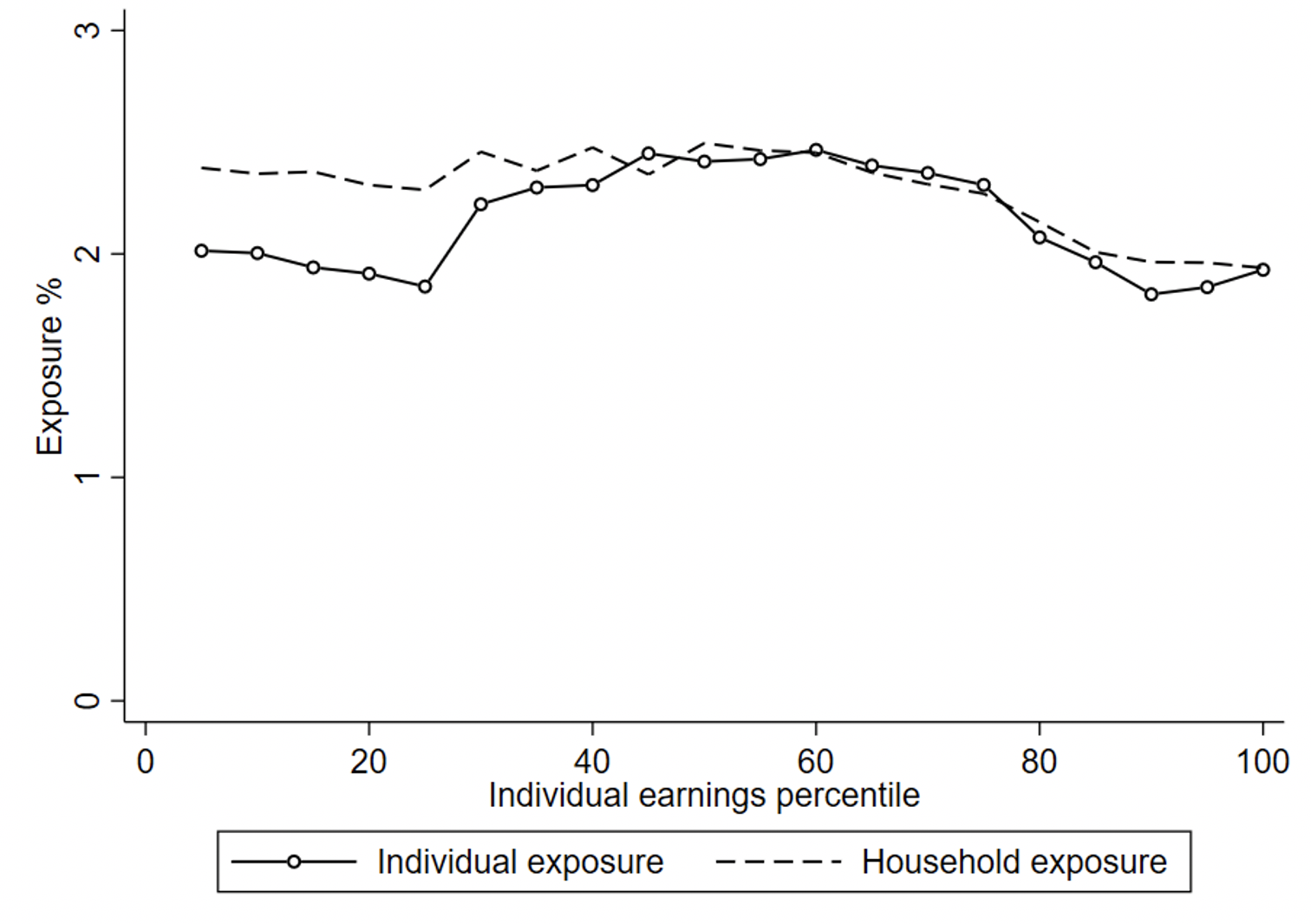 Source: Authors’ calculations using 2016 Annual Survey of Hours and Earnings, 2017 Quarterly Labour Force Survey and 2016 Business Structure Database.
Notes: Figure shows exposure predicted by our model across percentiles of the individual earnings distribution. We smooth by plotting average exposure within five percentile bands. Exposure varies by workers’ TTWA and across nine occupation groups. We merge exposure into the 2016 Annual Survey of Hours and Earnings to obtain estimated impacts over the earnings distribution of individual workers. We merge these into the 2017 Quarterly Labour Force Survey on the basis of workers’ current occupation and their current Government Office Region rather than TTWA (a level of geographic detail which is not available in public versions of the QLFS) to obtain household exposure. Household exposure is calculated using predicted exposure for household heads and their partners (if they have one) weighted by their shares in total household earnings (reflecting differences in hours worked). To be included in the sample, households must have at least one member in work.

Blue collar workers in the middle of the earnings distribution are most exposed to new post-Brexit trade barriers. This is partly because these workers are in jobs where there are not so many alternative less-exposed jobs in their local labour market. Overcoming frictions to these workers shifting across industries, regions and occupations will therefore be key to managing the impacts of Brexit. A second implication of our analysis is that workers lower down the earnings distribution are themselves less likely to be exposed to new trade barriers, but they are more likely to live in households where their partner is exposed, so that assistance for displaced workers should account for household as well as individual circumstances.