Yves here. As Wolf describes, the data is the latest jobs figure were sobering and didn’t reflect the current Covid spike, which was just getting steam as of the reporting date.

Needless to say, things will get worse before they get better. And an awful lot of hope is being pinned on the vaccines taming Covid quickly.

Everyone seems to be baking the highly anticipated potential future vaccines into the economic cake, but what has been happening for weeks is a spike in Covid cases across the US that has already triggered economic restrictions, including various versions of stay-at-home orders in Los Angeles County, San Francisco, and some other Bay Area counties, with restaurants closed for outdoor dining, strict capacity restrictions in retail stores, and many other restrictions. These moves are ahead of the State of California’s new framework for dealing with the spiking infections.

Other states and cities have similar programs, either on the front burner or on the back burner. The Covid spike has already crimped economic activity and jobs over the past few weeks and is going to do more severely going forward.

So the data we got today largely missed the labor market consequences of the spike in Covid cases. Those consequence are coming in the next employment reports, starting with the report for December.

Despite the cut-off dates having kept much of the Covid-impacted jobs data out of the results, the data have actually deteriorated in several aspects, including the number of people with jobs as reported by households, the employment-population rate, and the labor force.

The headline number of 245,000 jobs created came from surveys of establishments (companies, governments, nonprofits, educational institutions, etc.). That survey doesn’t track gig workers. It depicted a lousy recovery. But lousy as it was, it was the more benign part.

The survey of households, on the other hand, tracks people who are working full or part time, including gig workers. And households reported that the number of people with jobs ticked down to 149.7 million. This wasn’t a slowdown in growth, but an actual decline of 74,000 working people – the first month-to-month decline since April.

The chart shows both results, from establishments (green) and from households (red) – the biggest part of the difference being gig workers. It’s obvious that even by November 12, before the real impact of the Covid surge, this was no good, in terms of catching up with population growth, or in terms of anything else: 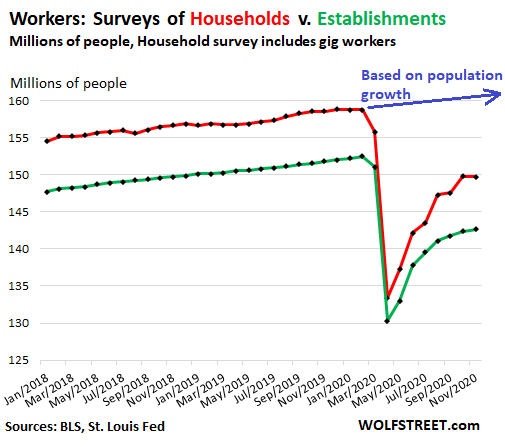 The employment-population ratio, which tracks the number of employed workers against the working-age population (16 years or older) also dipped in November, to 57.3%, a level first seen since in 1972: 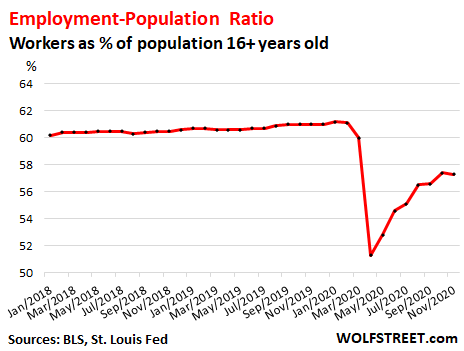 Over the long term, the employment-population ratio tracks the progress of globalization – of corporate America outsourcing labor to cheap countries – not only manufacturing and all the economic support that comes with it, but also all kinds of intellectual property work, such as coding and automotive design, and all kinds of other service work, from call centers to basic lawyering. This movement took on momentum in the late 1990s.

Since then, after each crisis, companies offshored more work, and the employment-population ratio recovered from the plunge, but not to its previous level, before the next crisis hit and the plunge started all over again, from lower highs to lower lows: 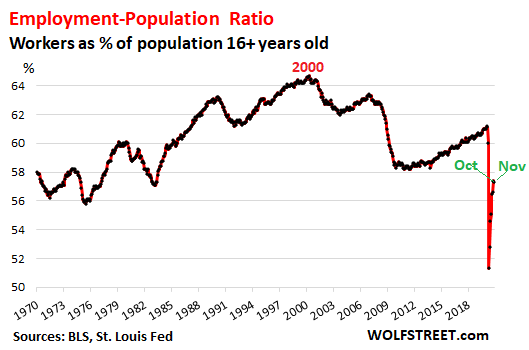 The labor force is composed of people who answer questions in the household surveys that indicate they are either working or are looking for a job, as defined by the BLS. People who want a job but haven’t looked for a job in the specified period are knocked out of the labor force.

During the early months of the Pandemic, the laid-off workers were still on earth, but they didn’t look for a job because it was hopeless. Then the labor force recovered through August, and stalled. In November – household surveys through November 14 – the labor force ticked down again, falling below where it had been in August: 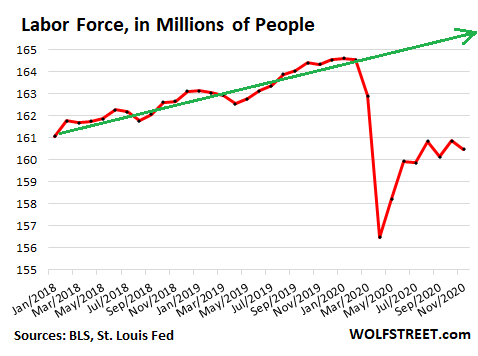 So this employment data, as dreary as it is, attempted to capture the labor market conditions the way they were through November 14.  In the three weeks since then, conditions have worsened, and they’re in the process of worsening further with the renewed restrictions now rippling across the country, and December is going to be rougher on the employment front.

Office occupancy plunged by the most in Dallas. In San Francisco, where it had already been rock-bottom, it dipped into the single digits. Read… The State of the American Office: Suddenly Emptying Out Again Under the Second Wave