Open oceans are vital for the transport of a large share of world trade. But they are also frequently at the centre of geopolitical tensions between nation states. This column estimates the economic costs of impeded shipping access in South East Asia. The results of the study suggest that restrictions to shipping due to military sanctions could have large negative effects on economic welfare for countries all over the world, including oil exporters such as the United Arab Emirates and Saudi Arabia.

Among other economic and environmental benefits, oceans are vital for the transport of an overwhelming share of world trade. The long-held principle of the ‘freedom of the seas’ is crucial for safe and frictionless international movement of maritime cargo. At present, the United Nations Convention on the Law of the Seas (UNCLOS) is the international legal framework around the freedom of the seas, establishing guidelines for resource extraction, trade, and sovereignty over the oceans (UNCLOS 1982). Importantly, the UNCLOS gives nations territorial claims on waters up to 12 nautical miles offshore but allows transit passage (or ‘innocent passage’) for both military and civilian ships through territorial waters and the high seas beyond.1

In recent years, however, numerous geopolitical tensions and threats by state actors seem to potentially impede freedom of movement through international waters. The Strait of Hormuz – through which 20% of global oil supply flows – witnessed multiple attacks on oil tankers amid the escalating confrontation between Iran and the US in 2019. In South East Asia, several nations have disputes over island chains in the South China Sea. The efforts of China to transform offshore reefs and shoals into artificial islands and build naval bases, as well as the ‘Freedom of Navigation Operations’ by the US and British navies, have further heightened uncertainty in the region.2 These tensions were reflected by a stand-off between Chinese and Vietnamese navy ships over geological surveys in disputed waters in July 2019.

This column investigates the impact of a potential long-run disruption of navigation through the South East Asian sea lanes on trade and welfare. Antecedent work on the re-routing of maritime trade falls into two lines. The first uses the opening and closure of major canals as quasi-natural experiments to causally estimate the effect of trade on incomes (Feyrer 2009, Maurer and Rauch 2019). The second line uses these events to estimate distance elasticities of trade and to quantify equilibrium trade and welfare effects (Hugot and Dajud 2016, 2017). In recent research, we simulate the potential closure of key maritime waterways in the South China Sea to predict the impact on trade and welfare (Cosar and Thomas 2020). To our knowledge, we are the first to apply quantitative trade analysis to counterfactual scenarios involving the South China Sea.

We simulate a complete shutdown of maritime shipping through the South China Sea and all the east-west passages in the Indonesian archipelago, causing shipping between the Pacific and Indian oceans to re-route to south of Australia. We do so by estimating the shortest actual and counterfactual maritime trade routes between existing ports and the associated sea distances using ‘Geographic Information System’ software. Using the increased distances in a workhorse model of international trade, we calculate the trade and welfare effects of moving from the initial to the counterfactual state. We also correlate military spending (as a proportion of GDP) with the simulated welfare losses to measure if countries might be responding to the perceived risk and cost of a possible conflict.

Figure 1 shows the ports and the region that we focus on in our counterfactual exercise. We calculate the shortest sea routes between all pairs of ports. In the counterfactual scenario, we ‘close’ the circle on the right panel to navigation. This ‘closed’ zone captures a scenario in which a large swath of the South China Sea – the waterways connecting the Pacific and Indian oceans – is inaccessible due to conflict or other military action. In particular, we do not allow trade through the passages along the northern coast of Australia. The bottom panel of Figure 1 provides an example of how the closure impacts the sea routes between two sets of ports. The dashed lines are the maritime routes between the ports of Los Angeles and Visakhapatnam. The solid lines connect London and Nagasaki. The bottom left panel displays unconstrained shortest sea routes in the baseline, whereas the bottom right panel displays the counterfactual routes. In our counterfactual scenario, almost all of the trade that normally travels through the Malacca Strait or the South China Sea instead passes south of Australia, substantially increasing the distance (and thus the trade costs) between affected countries.3 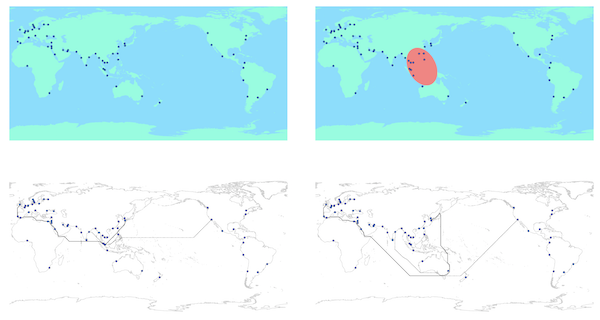 As shown by Arkolakis et al. (2012), welfare losses due to higher trade costs in a set of workhorse models of trade can be calculated from a sufficient statistic: the change in the expenditure share of a country on its domestic goods. This sufficient statistic holds under the same assumptions that make these models admit a structural gravity equation describing bilateral trade flows. Changes in trade costs – in our case induced by increased port-to-port distances or the shutdown of a country’s maritime access ¬– lead to changes in countries’ expenditure shares on purchases from all countries, including themselves. Given the elasticity of trade with respect to trade costs, initial income levels, and initial trade shares, welfare changes for each country can then be calculated from the change in trade costs implied by the changes in distances.

It should be noted that the global heterogeneous increase in trade costs could, in principle, result in welfare gains for some countries. For instance, countries with limited trade ties to the impacted region could have potential market share gains in third markets due to higher costs of shipping between the impacted region and these third markets. Remarkably, every single country in our data (except Ireland) sees a welfare loss in the baseline simulation. This result is driven by the fact that the countries that lost maritime trade ties are substantial contributors to global trade, and because a vast amount of trade passes through the South East Asian waterways specifically because alternative routes are significantly longer.

As expected, the nine countries with their ports located within the blocked region incur the largest losses.4 For the baseline simulation, Taiwan experiences a predicted real income loss of 34%. The effects on Japan and Korea are between 2-3%. Two countries outside the East and South East Asia regions also incur sizeable welfare costs. We predict the United Arab Emirates and Saudi Arabia to contract by 5% and 3%, respectively. Being important exporters of oil to the region, the cessation of trade has a large impact on these countries.

Given the high welfare losses associated with a closure of the South East Asian seaways, it is conceivable that countries standing to lose most from a potential conflict in the region would spend more heavily on defense and security. To check this, we use the SIPRI Military Expenditure Database and calculate the 2001-2018 average military expenditures of the countries in the impacted region as a percentage of GDP. We test whether a higher predicted welfare loss due to an interruption of maritime trade is associated with a higher military expenditure in an effort to deter such a scenario.

Figure 2 presents the added variable plot of the relationship between military expenditures and simulated welfare losses corresponding to a preferred specification.5 The relationship is robust to excluding each observation at a time (with the exception that the coefficient of interest is imprecisely estimated when Singapore is excluded from the dataset). Evidently, higher predicted GDP reductions are associated with higher military expenditures, and more so for countries that are closer to the Malacca Strait, the epicentre of a potential conflict. 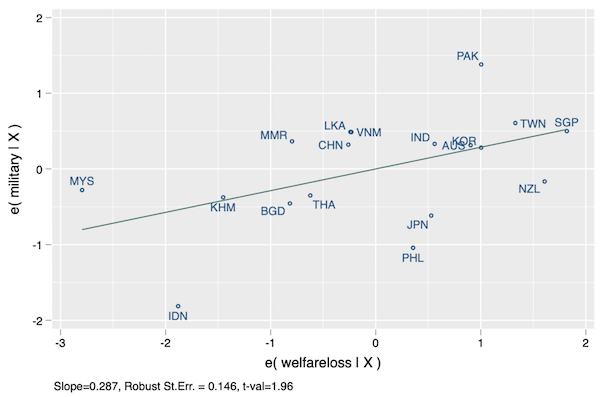 Given the sample size and the nature of the exercise, we do not claim to demonstrate a causal relationship. There are multiple considerations that must be factored into military spending decisions, such as perceived threats and alliances. However, the relationship is intriguing considering how unrelated these data may seem at first.

Our results illustrate the importance of maritime trade through the South East Asian seas, and the strong economic incentives behind political and military movements. Geopolitical events that increase insecurity in critical maritime regions could have substantial welfare effects. We provide evidence consistent with the idea that these perceived threats could set in motion a rapid arms race for the countries involved.

References and notes available at the original.