Yves here. Oops. Covid is killing auto sales. Concerns about the direction of the economy, fewer car rentals due to a big decline in  business and personal travel and reduced commuting might have something to do with that.

Oddly, one of my friends in the auto supply business who has Mercedes and Toyota among her customers said after a very scary spring of close to zilch sales, that things had gotten back to pretty close to the old normal. However, two or three months of severely depressed revenues is consistent with the picture Wolf paints below.

During the infamous year 2020, with all its distortions and shifts, automakers delivered 14.46 million new vehicles in the US, retail and fleet combined, down 15.4% from 2019, the largest year-over-year percentage decline since 2008 (-18%). Topping off years of declines, 2020 took auto sales back to levels first seen in the 1970s.

Every recession has left a deep scar on auto sales. But over the past 20 years, it has taken many years to get back to the prior highs, only to then watch sales plunging again. The last high was in 2016, which had barely eked past the prior high of 2000, in this terribly cyclical business of long-term stagnation interrupted by deep plunges: 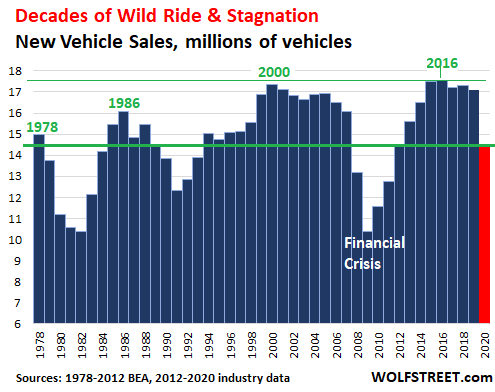 In their press releases, they highlighted a cherry-picked record here or there. But long-term sales trends, no way. Investors have a short memory, or no memory – that’s what automakers are counting on. And the media doesn’t report long-term sales trends either, so I will. Because there are some doozies in the batch, and because the Pandemic didn’t start the trends but just accelerated them.

General Motors, the largest automaker in US sales, reported that its deliveries in the US in the year 2020 fell by 12% to 2.55 million units. It was the fifth year in a row of declines. The Pandemic just accelerated the process. Since 2015, its vehicle sales have dropped by 17.4%: 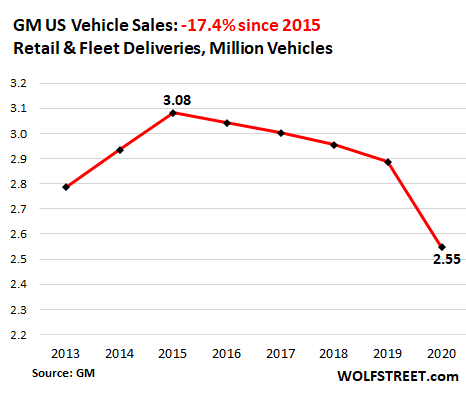 Toyota, which re-became the second largest automaker in the US last year, reported that its total sales in the US fell by 11.9% in 2020 to 2.11 million vehicles, thereby bypassing Ford, after having surrendered the second position to Ford in 2019. The two have been nip and tuck for years. For Toyota, it was also the fifth year in a row of declines. Since 2015, Toyota’s sales have dropped 15.5%: 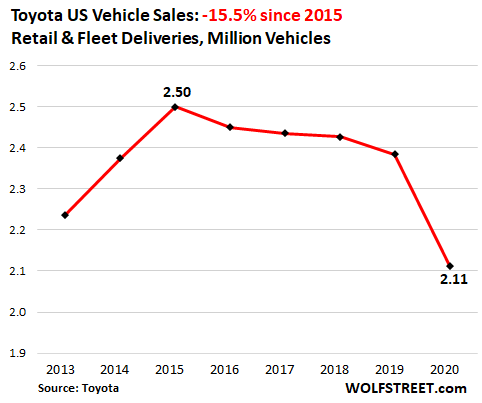 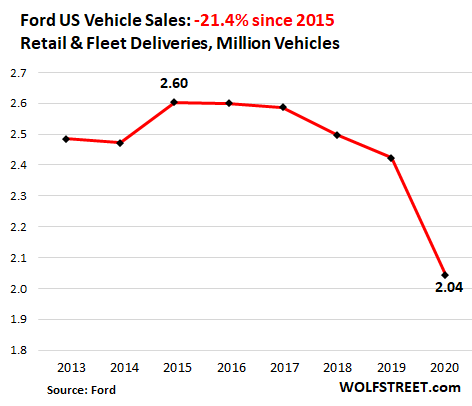 Fiat Chrysler Automobiles, the fourth largest automaker, reportedthat its US sales fell 17.4% in 2020 to 1.82 million vehicles. Since 2015, its sales have dropped 19.6%. But it’s the only automaker among the seven giants here whose sales in 2020 were higher than in 2013, if only by a hair, and if only because 2013 was still so crummy for FCA: 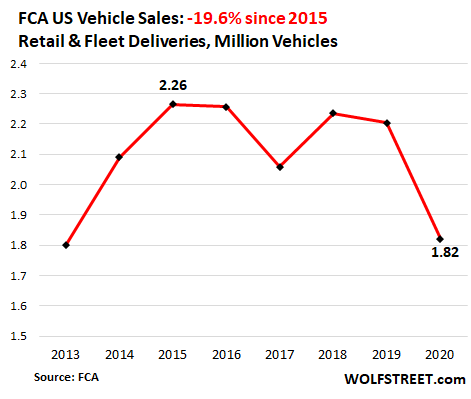 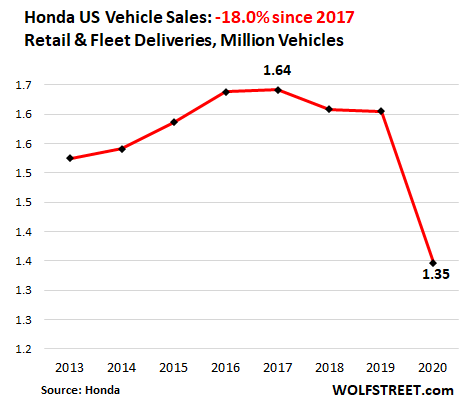 Hyundai and Kia – they report separately though they’re joined through their ownership structure – sold 1.21 million vehicles combined in 2020, down 7.4% from 2019. This makes the company the sixth largest automaker in the US, with Nissan’s sales having collapsed over the past three years, and fallen through the floor. Hyundai-Kia sales are down 15.1% since 2016: 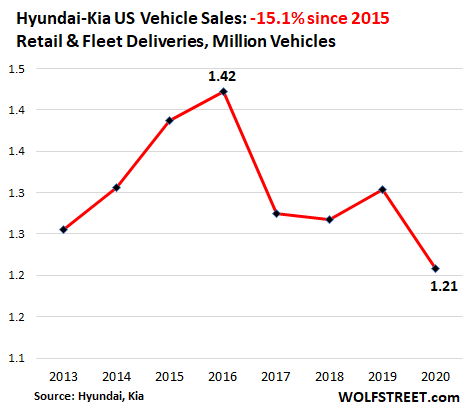 Nissan, which dropped to seventh place this year, reported that its sales are in a death spiral – well, it didn’t phrase it that way, but that’s what the numbers said. 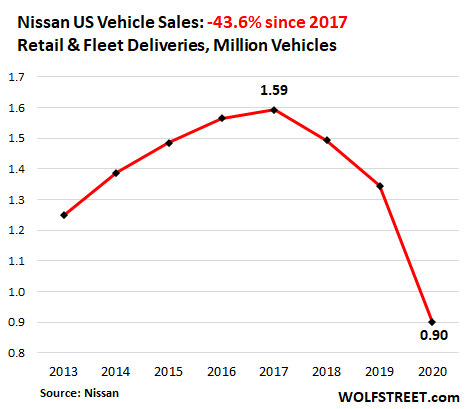 Given the state of this industry in the US and other developed countries – decades of stagnation interrupted by deep plunges in vehicle sales – automakers have two choices to increase their revenues in dollars: Raise prices or sell upscale vehicles. And they’re doing both. According to J.D. Power, the “average transaction price,” a standard industry metric to track precisely these moves, jumped by 9% year-over-year in December to a record of $38,077.

They’re raising prices and they’re all going upscale as their salvation. And thereby they’re excluding a big part of the population from buying a new vehicle, which is in part responsible for, you guessed it, decades of stagnation interrupted by deep plunges.

The remaining automakers in the US are much smaller. All German automakers combined are outsold by Hyundai-Kia. Tesla only reports global sales including China and Europe, not US sales, but its US sales are minuscule compared to the giants.

Tesla’s global market shares in 2020 was 0.7%. But its market capitalization is higher than the combined total of Toyota, Volkswagen, Daimler, GM, BMW, Honda, Ford, and Fiat-Chrysler as the zoo has gone nuts. Read… Tesla Finally Almost Hit 500,000 Deliveries, Two Years Behind its Promise, for a Global Market Share of… 0.7%