Yves here. I have to confess to enjoying articles that show that history matters, that where we have wound up is very much path dependent. There’s a tendency to view ancient civilizations as influencing art and culture, but not much other parts of modern life.

The enduring impact of ancient colonialism can still be felt in the economic geography of the Mediterranean region. This column combines historical data on ancient colonies with current data on economic outcomes to show that areas once colonised by the Phoenicians, Greeks, and Etruscans have higher population densities and enhanced economic activity to this day – effects due more to the colonisation episode than to geographic attributes. The impact of ancient colonialism can thus be traced back more than two millennia, to the origin of the Mediterranean urban system.

Large Mediterranean cities – including Bologna, Istanbul, Malaga, Marseille, Nice, and Varna – were founded by Phoenicians, Greeks, and Etruscans in an early example of colonialism from ancient times (c. 11th to 6th centuries BCE). Given that these cities are today vibrant hubs of economic activity, the link to their colonial origins raises interesting questions. Can this anecdotal evidence be generalised? Is the economic importance of these cities due to their ancient colonial foundation or to advantageous geographic features? More generally, did ancient colonialism have an impact on the distribution of population and economic activity along the Mediterranean? And if this is the case, how did it happen?

These questions are related to several topics that have attracted attention during the last two decades from economists looking to explore the relative importance of geographical characteristics vis-à-vis historical events on the spatial distribution and economic activity of the population (Redding et al. 2011, Nunn and Puga 2012, Allen and Donaldson 2020); the persistence and dynamics of urban networks (Michaels and Rauch 2013 and 2018, Barjamovic et al. 2019); and the economic impact of colonialism (Acemoglu and Robinson 2017a and 2017b, Michalopoulos and Papaioannou 2015). While there is a large and growing literature on the ‘long shadow’ of modern European colonialism on economic development (discussed recently in Roessler et al. 2020), evidence regarding the legacy of ancient colonialism remains scarce.

Analysing the Impact of Ancient Colonialism

In a recent study (Chronopoulos et al. 2020), we combine historical sources with modern day data on night light emission and population to investigate the impact of ancient colonisation on economic activity and population density in the Mediterranean region. Phoenician, Greek, and Etruscan societies were urban-centred, sophisticated economies with a higher standard of living and more inclusive institutions than most of their Mediterranean neighbours. It is thus plausible to hypothesise that colonies established by these civilisations had a positive long-term effect on population density and economic activity. However, testing such assertions poses significant challenges given that these colonies were founded in the remote past and their effects may have vanished.

Figure 1 Map of ancient colonies in the Mediterranean area 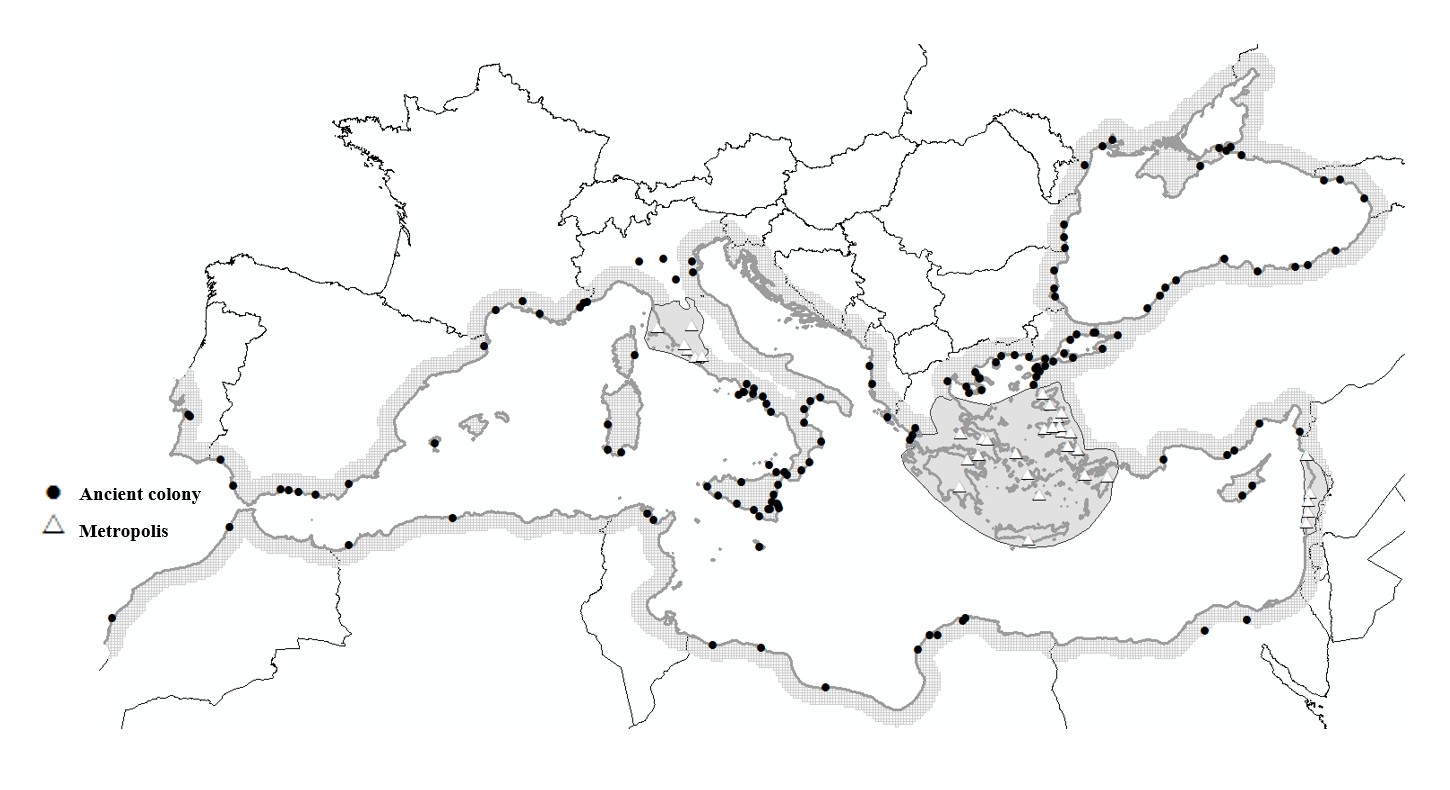 A key question is whether this relationship is driven by man-made consequences of colonisation or by geographic advantages specific to colonised areas. The latter would imply that places with ancient colonies would have evolved similarly even if they had not been colonised. To rule out the possibility that the results reflect locational advantages, our analysis controls for a large array of potential confounders (in addition to using matched samples) to ensure that we compare similar areas.

Explaining the Effect of Ancient Colonies

We forward two complementary mechanisms driving the impact of ancient colonialism on modern-day economic activity and population density. These comprise the transmission of institutions and culture from the metropolis to the colonies, and the persistence of urban settlements once they are established. We test for the importance of both mechanisms by comparing ancient colonies with settlements of other cultures from the same era. If urban persistence were the only relevant mechanism, we should not observe differences between ancient colonies and other settlements. However, we do observe a number of differences, including the finding that ancient colonies had more urban-related features (in ancient times spanning 330 BCE to 300 CE) and stronger commercial orientation (they were closer to ancient trading routes measured in c. 150–200 CE) than similarly aged settlements. Moreover, ancient colonies also exhibit higher levels of economic activity (light density) today than settlements from the same era. This evidence indicates that the legacy left by ancient colonialism is not only the consequence of founding a settlement, but a ‘special’ legacy with traces of an urban style and culture.

Figure 2  Ancient colonies and the evolution of the urban system 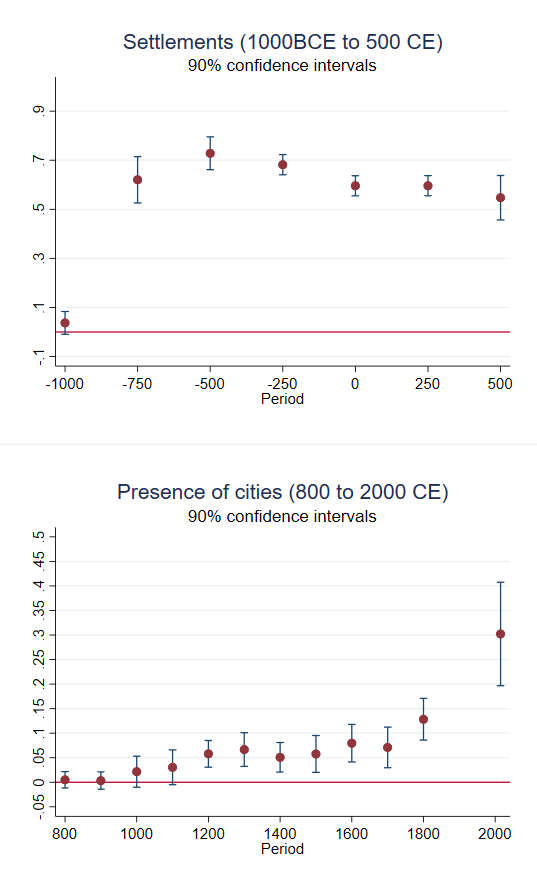 Note: the graphs represent the effect of having an ancient colony in the grid cell on the presence of settlements (top) and cities (bottom).

Our findings suggest that a particular man-made intervention, via the founding of a colony in a foreign land, can have a large and persistent effect, which reinforces the idea that historical shocks play a significant role in the structure of regional and local economies. By geographically spreading urban settlements and advanced civilisations, ancient colonialism had a positive impact on population density and economic activity in the Mediterranean. The Greeks, Phoenicians, and Etruscans not only influenced modern Western culture in general, but also left an economic legacy at the local level.