We’ve discussed crapification off and on over the years. Readers lament how clothes have gone downhill. Even at the high end, fabrics, finishing and tailoring are shoddier. You are luck if that major appliance will last five years. Cars chock full of telematics look to be intended for a seven year life. Copper pans are lighter. Tools have gone downhill.

While crapified goods force you either to live with something that breaks early, forcing you to live with it, make a costly/inconvenient repair, or buy a replacement, crapfied services are an ongoing tax on your time and a stressor on already frayed nerves. I work in the same room as my mother so as to keep an eye on her and the aides (I have gotten very good at tuning out crime shows). She’s even noticed how much time I spend daily rectifying screw-ups. It used to be perhaps a half hour a week. It’s now averaging over 20 minutes a day.

Readers were well acquainted with the old normal annoyances, like getting routed to call centers in India where the prejudice against the heavy accents was warranted, since they seemed able to manage only the most basic scripts. Or all sorts of phone systems having even more elaborate prompts in order to keep you away from a live human being.

But there’s been a big ratchet down with Covid. And it seems to go well beyond organizations having trouble managing a significantly remote workforce. There also looks to be significant and deliberate cuts in service, as in using Covid as a cover to cut costs, whether the business is suffering or not. Remember that some companies, like health insurers, are making out like bandits.

Let me give you a few examples that would not have happened in the old normal.

MRI train wreck. Last January, I got an MRI from American Health Imaging. I paid at the time of service, got a disk with the image and necessary software on it, and was told I could get a statement with the information I needed to submit for my insurer for reimbursement in two weeks.1 I called for the statement later that month and got it in the mail a few days later.

In December, I got a new MRI from American Health Imaging, although a different location. The front desk staff was difficult. The MRI disk I received didn’t have all the files. I didn’t want to go back to the facility, both because the trip would take time and I didn’t want to deal with the same people again. So I called the office in Atlanta. Despite leaving multiple voicemails and sending e-mails to the recommended “conceirge@” address, no one got back to me. I finally reached a person who promised to send me a disk. Disk never arrived. I called again and finally got a person who got a supervisor involved to send a disk via UPS so it could be tracked. So when I finally got someone who took ownership of the problem, the disk matter was resolved, but it was like pulling teeth to get to that point.

And it’s now over 6 weeks and I still don’t have the right statement. In December, I did reach a live human who did send me a statement first thing the next morning, by e-mail. But it wasn’t the right format! It was not the same as the one I’d gotten before, and importantly, was missing information that I was pretty sure Cigna would want to see. I’ve called multiple times, have not been able to get a representative on the phone, and my detailed voicemails and e-mails might as well have gone in a black hole.

Delivery hell. I ordered some product from a New Jersey company, Image Beauty, for a friend in Manhattan. The recipient lives on a numbered street with a building number and apartment number. That means there ought to be no difficulty in them receiving the package, right?

Think again. I stupidly didn’t sent the tracking information to my friend. Friend asks me a month after I placed the order, in early November (as in well before the Christmas rush).

I pulled up the tracking information, which was not from the delivery service but a template on their site. It implausibly showed a delivery date before the date they show the package as leaving their warehouse.

I called to make a stink. First they tried saying the package must have been delivered. I told them the building has a live-in super and there had been no thefts or other reports of missing deliveries. Then they say a lot of USPS packages to Manhattan have gone missing. They told me to wait a few days, as if that will make a difference for a box that has been out in the wild so long. I called again and they issued a refund.

Foolishly, because one item I wanted to get for my friend was difficult to find, I placed an order again in mid December. This time I sent the tracking information to him. By last week, he was ansty about not having received it. It had a UPS tracking number.

He called UPS. They claimed they had given it to USPS because it didn’t have an apartment number on it. Mind you, the e-mailed confirmation I received most assuredly showed one.

He then went in person to his USPS office. They said they had sent it back to UPS. He was then steamed up and went to the UPS office where USPS said it ought to be. UPS said they had no idea where it was but they were nevertheless confident it would be returned to the shipper and he should try to get a refund. 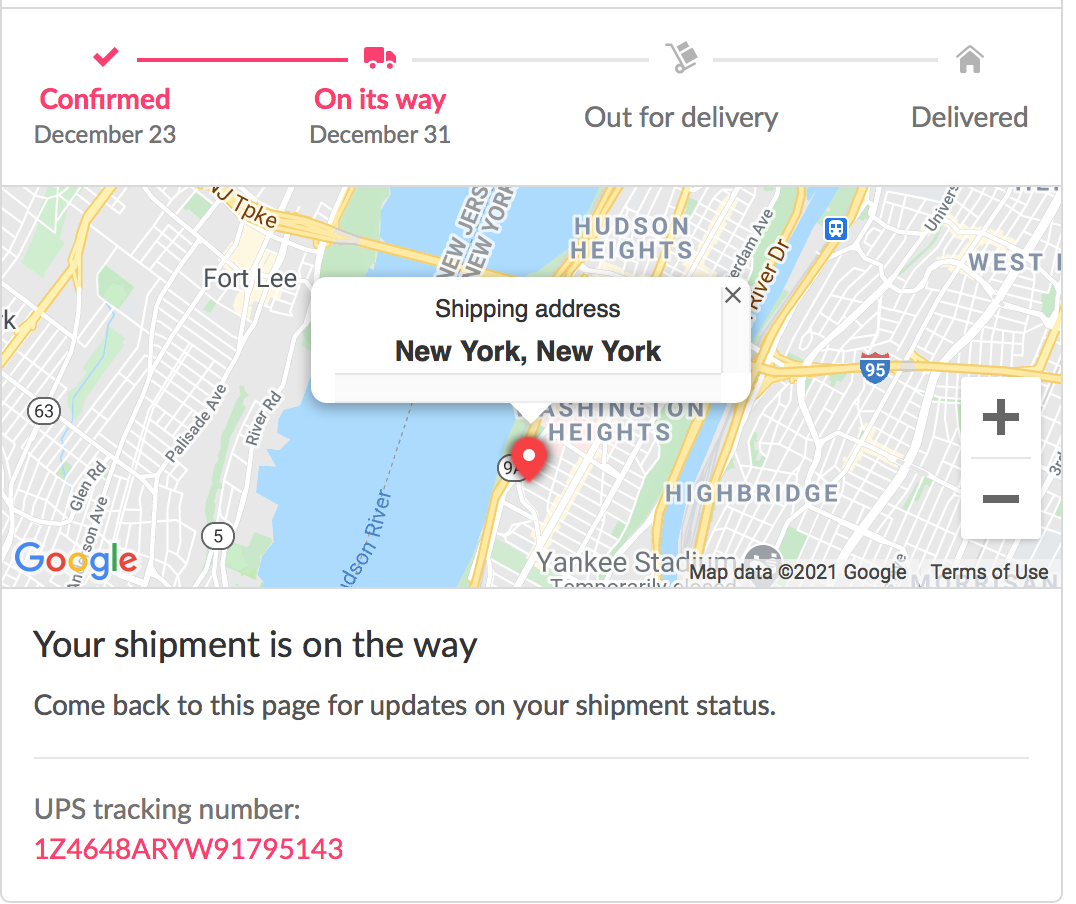 When UPS, per what they told my friend, shows the package as having been dumped on USPS and still missing:

My friend said he spent four hours unsuccessfully trying to run down the delivery, between time on hold, time going to USPS and UPS and standing in lines (long at USPS even in January).

Breakdown in phone protocol. My mother’s home insurer kept calling her but not saying what it was about in their voicemails. Then they sent a note saying they were going to cancel her policy. Even when I called back during the day I kept getting routed to voicemail and despite leaving substantive messages, kept getting non-substantive voicemails. It turns out they wanted proof she’d repaired her roof (she’d put in a claim). Why not say that in all those voicemails?

Similarly, I have been trying to see a couple of new doctors about the problem that led me to get an MRI. You’d never imagine doctors were having trouble with business given the lackadasical responses I’ve had. For one, in a local, extremely well regarded sports institute, it took four calls to get someone even though the voicemail system gave the strong impression new patient calls would be returned. I did have a very good conversation, with the nurse/assistant taking my e-mail address so she could e-mail me and I could send her the MRI report and Dropbox links to the films (I had the films from January and the written report said the December MRI was not much different, so I figured he could have an initial look while waiting for the December disk to arrive).

No e-mail arrived. I had to call two more times to get that e-mail.

I sent the Dropbox link and the MRI reports over a week ago. I haven’t heard a thing.

Similarly, there’s another doctor with a promising technique but it would take some travel to see her. Even with a referral, and the staff understanding I’d like her to look at the MRI to see if she thinks she can treat me (I would travel only to get treated, not to be assessed), it’s taken far too many calls, even with happy accident of one call being mistakenly routed to the person who handles images, rather than the “out of town coordinator,” to get to someone who would take the images and then too many false starts (they claimed to be unable to receive Dropbox images, then unable to open them…I don’t see why they will have any better results with the disk. And yes, another MD has read these films, so the current set of files is good).

I could go on but you get the point. I fell like I now have a ball and chain around my ankle, of business, personal, and maternal administrativa that is impeding me in getting on with the things I really need to be doing, like taking care of my work and my health. And I don’t see this getting better any time soon, if ever. And even worse is I know those are high class problems compared to what many people are up against.

1 I pay for pretty much everything medical this way because the rate for “cash” payment is at least as good as my insurer’s best negotiated rate, plus my privacy rights are stronger.