Yves here. While this analysis targets a very important question, the impact of cheap money on racial inequality, its analysis on the balance sheet side looks more robust than on the income side. The post looks at how monetary stimulus disproportionately reduces black employment gains, and then multiples the jobs increase by the average income for black households.

It seems highly probable that that approach overstates income gains since the financial crisis. First, the jobs created have been overwhelmingly low income McJobs, as in low wage and thus likely to be lower than average household incomes. Second, the post crisis job market has also featured a high level of “involuntary part-time employment” as in people who want a full time job unable to find one or even make two part time jobs add up to full time jobs. It seems reasonable to assume that people of color would be more afflicted by those developments and hence “employment recovery” might not be as rewarding as it looks on the surface.

But even with that quibble, this piece confirms what many already know: that monetary stimulus is more effective at goosing asset prices than the real economy, and the existing well off (as in overwhelmingly white top 10% and the finer strata of the richer rich) gain more than ordinary folks, who have higher relative minority membership.

The gap between the income and wealth of black and white households in the US is large and persistent. According to the 2019 Survey of Consumer Finances (SCF), the median wealth of a white household is almost nine times higher than that of a black household. The income gap is smaller (1.7 times) but still large.  Moreover, these gaps are as large as they were 50 years ago (Kuhn et al. 2020).  Concern about racial inequality has increased recently with evidence that the COVID-19 pandemic is having a disproportionate effect on the black community (Bertocchi and Dimico 2020). These stark facts have attracted the attention of economists (e.g. Mayhew and Wills 2020, Chetty et al. 2018) and policymakers. For instance, Raphael Bostic, president of the Federal Reserve Bank of Atlanta, recently stated that the Federal Reserve “can play an important role in helping to reduce racial inequities and bring about a more inclusive economy”.1

Yet at the same time, monetary policy has portfolio effects through its impact on asset prices. Asset price changes should affect the wealth distribution if portfolios differ systematically between black and white households, as is the case (Figure 1). Only a third of black households hold equity and less than half own a home. As a result, monetary policy that increases asset prices potentially has different effects on the portfolios of black and white households.

Much of the existing literature on the distributional consequences of monetary policy focuses on the income distribution, while the wealth distribution has largely been ignored because it was previously assumed that policy effects on asset prices were temporary. However, recent work suggests that these effects are persistent (Bernanke and Kuttner 2005, Paul 2020, Bernanke 2020, Cieslak and Vissing-Jorgensen 2020). The relative magnitudes of earnings and portfolio effects on the racial wealth and income gaps have not been explored in the literature.

To estimate the effects of a policy shock on asset prices, interest rates, and the unemployment gap, we use instrumental variables local projections following Stock and Watson (2018) and Jorda et al. (2020). Several exogenous policy shock measures are taken from the literature, including our benchmark series from Romer and Romer (2004) as updated by Coibon et al (2017).

Figure 2 shows the effects of the monetary policy shock (a 100 basis point reduction in the federal funds rate) over a five-year period.  Similar results are found with other shock measures. There is a substantial asset price boosting effect of surprise monetary easing, in combination with a reduction in the black–white unemployment gap. If white households profit disproportionately from such asset price increases, then it is possible that the portfolio effects of monetary easing go in the opposite direction of the income effects.

Based on our estimates of the asset price effects and the observed portfolio allocation, we derive the estimated effects of the monetary policy shock on wealth, which are shown in Figure 3. An unanticipated monetary policy accommodation leads to asset price changes that benefit white households to a much larger extent than black households because average white wealth is much larger, and a larger fraction is held in equities. The largest effects are after three years, reaching about $25,000 for white households and about one-fifth as much for black households. The biggest effect comes from the large and persistent effect on equity prices, while the house price effect diminishes over time. Bond effects are small because bond holdings are only a small fraction of total wealth for both black and white households. 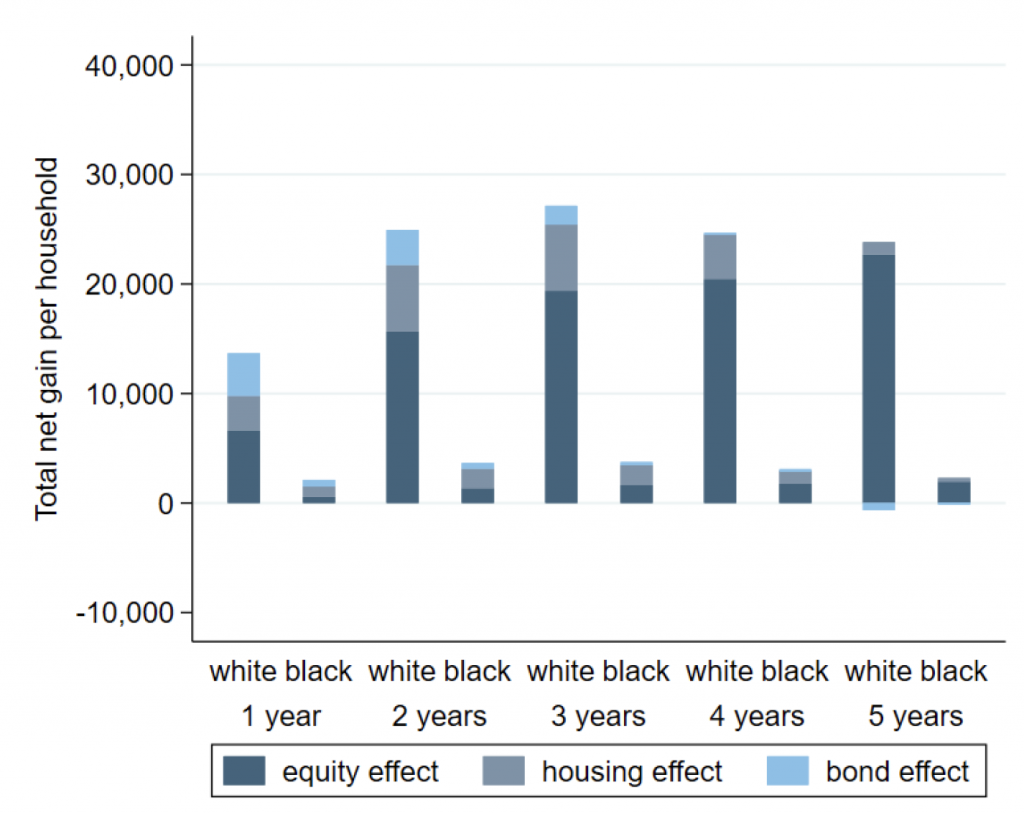 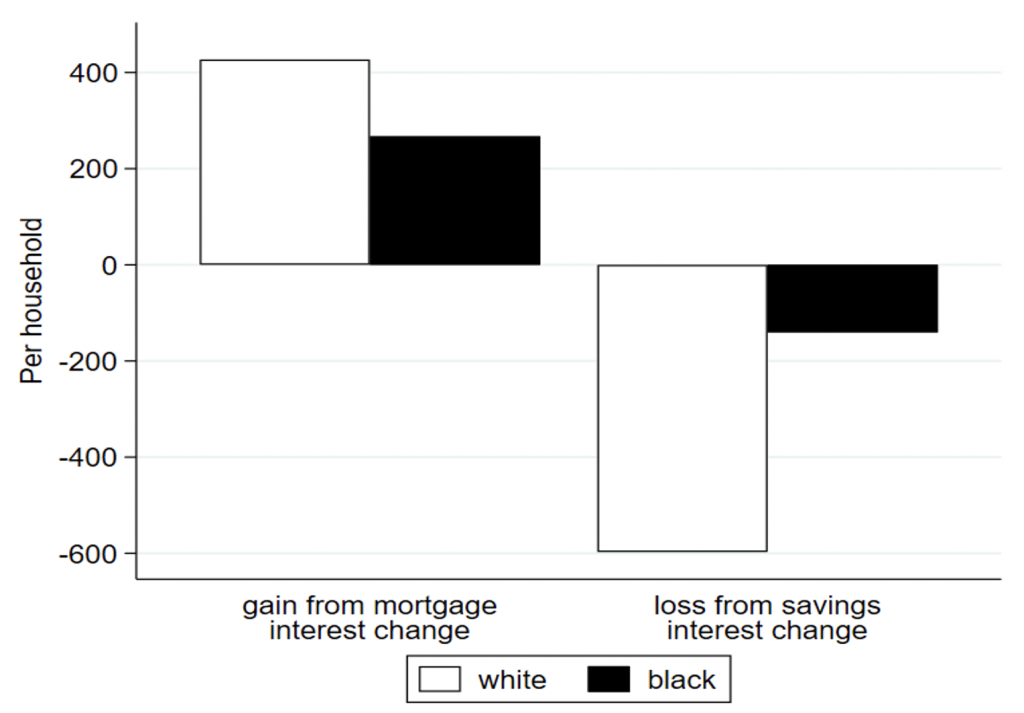 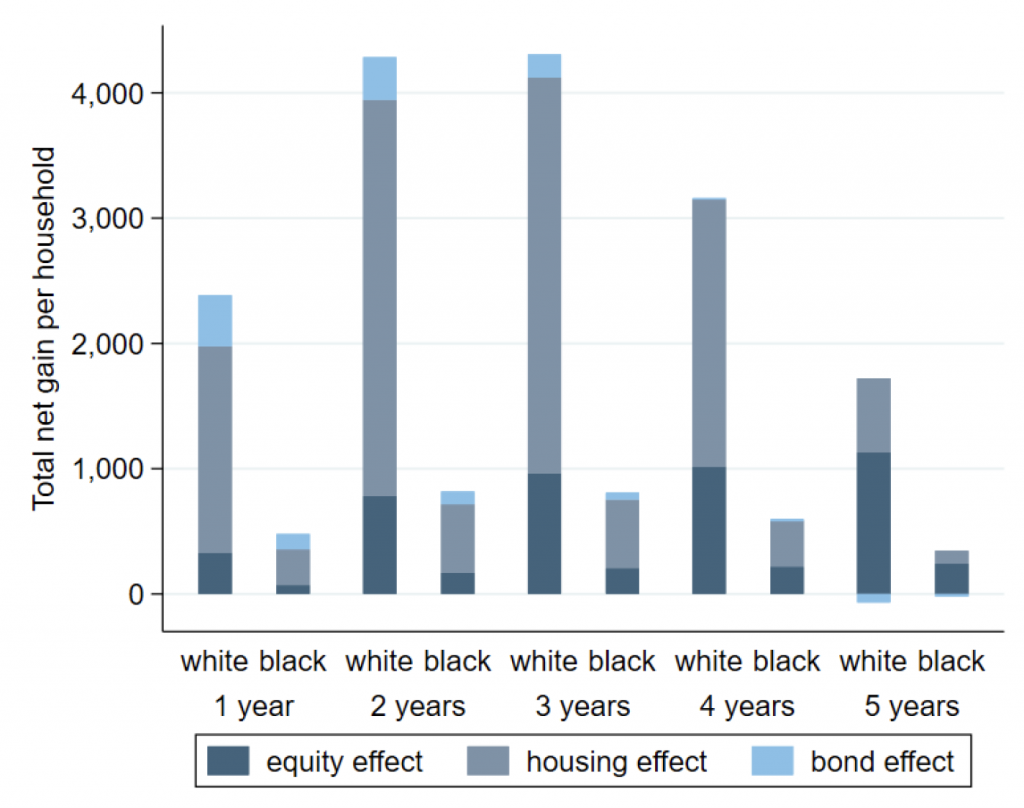 The average gap between black and white unemployment rates has historically been about six percentage points. Our estimates show that the gap is reduced by a 100-bps monetary policy shock, with a peak effect after 3 years of -0.34 percentage points. We use earnings data from the 2019 SCF and some conservative assumptions to estimate the impact of the reduction in the unemployment gap on the earnings gap. Specifically, we assume that each black household head who finds employment receives the average earnings of employed black households. The additional income gains of the average black relative to white household is computed by multiplying the estimated impact of the monetary policy shock on the unemployment gap with the average earnings gain. The result is less than $100 per household, or just 0.19% of annual total income for all black households.

Monetary policy shocks that change asset prices have differential effects on the wealth of black and white households. White households gain more because they have more financial wealth and hold portfolios that are more concentrated in interest-rate-sensitive assets such as equities. At the same time, monetary policy shocks reduce the gap between black and white unemployment rates and bring larger earnings gains for black households. Bringing the two together, however, leads to one stark finding: the reduction in the earnings gap pales in comparison to the effects on the wealth gap. Our analysis therefore does not bode well for the suggestion that a more accommodative monetary policy helps alleviate racial inequalities. Clearly, this does not mean that achieving racial equity should not be an important objective of economic policy, but the tools available to central banks might not be the right ones.