Yves here. In fairness to this short article, one thing it establishes, whether it intended to or not, is that it’s not easy to divine what the best balance between working at home versus working at the office might be for many enterprises. As a lowly consumer and small business person, it’s clear that there’s tremendous variation among companies as to how well they are making having a far-flung employees “work” for clients.

And despite the authors’ pointed neutrality, a large-ish survey of CEOs in the Wall Street Journal a few months back found that nearly all were negative on working from home and were looking forward to having their staff in a traditional office setting. Another lapse is the article acknowledges that employees with families (particularly kids not in school) can find it very difficult to be productive when working from home.

Containing Covid-19 has required more people to work from home, accelerating the trend towards telecommuting. This column uses a general equilibrium model to analyse the long-term effects of this trend, and finds that it may prove to be a mixed blessing. Working from home saves time that would be spent commuting but deprives firms of the benefits from information and knowledge spillovers. Firms use less office space, but workers require more space at home. Overall, GDP will likely be maximised when working from home occurs one or two days per week.

Since the 1980s, firms have experienced new organisations of labour in which the flexibility of ‘where the work can be done’ is a major feature (Spreitzer et al. 2017, Mas and Pallais 2020). The trend in ‘telecommuting’ – also known as ‘working from home’ (WFH), and defined as work tasks performed from home or satellite offices one or several days per week – has accelerated during the Covid-19 pandemic. While less than 5% of the US labour force regularly worked from home in 2019, and 5.1% in the EU in 2018, these numbers have jumped since March 2019: Telecommuting has finally arrived on a grand scale. One may thus wonder whether it is here to stay and, if so, what economic impact it might have.

Whether telecommuting will remain when the pandemic is over depends on the long-run benefits it provides to firms and workers, as well as whether firms will hang on to the infrastructure and costly tools for remote work. Understanding how telecommuting on a large scale may change wage structure and GDP requires a model that allows us to analyse the effects of remote work on productivity and wages, the number of firms, commuting patterns, and the demands for goods, services, and housing/office space.

In a recent paper (Behrens et al. 2021), we analyse the wider economic impacts of large-scale telecommuting. Is it the boon advertised by its proponents, or the bane suggested by its opponents? According to its proponents, telecommuting cuts commuting time and costs, reduces traffic congestion and the emission of greenhouse gases, contributes to a better work-life balance for workers, and allows firms to save money on office space in large cities where rents have skyrocketed. Telecommuting’s opponents, on the other hand, stress the fact that workers’ isolation may have negative effects on their productivity due to interference between work and family responsibilities and the lack of contact with co-workers (Rockmann and Pratt 2015). There is no clear consensus on important questions such as whether telecommuting makes workers more productive.1 Consequently, there is even less consensus on broader questions such as the wider economic effects that telecommuting may bring about.

Our model encapsulates the key ingredients and trade-offs that we believe are important to better understand the broad effects of an increase in telecommuting on both GDP (efficiency) and the wage structure (equity).

First, telecommuting obviates the need to travel physically from home to the workplace. This form of commuting is very time consuming (in 2014, an estimated 139 million US workers spent a collective 3.4 million years commuting; see Ingraham 2016), accounts for a significant share of workers’ expenses, and is reported to be one of the most unpleasant activities in an individual’s daily life. Reducing commutes frees up resources and is likely to increase total hours worked. On the other hand, and equally important, productivity benefits that arise through face-to-face interactions in the workplace and in dense central cities will likely be foregone in the decentralisation of work. The existence of these agglomeration economies – productivity increases with the density of economic activity – is empirically well documented and is due, in part, to knowledge and information spillovers through face-to-face contacts among skilled workers that are very localised within firms and central cities (Liu et al. 2018, Rosenthal and Strange 2020). These agglomeration effects that drive central-city productivity will be negatively affected if the number of skilled workers in business districts shrinks significantly. Since telecommuters do not benefit from those various effects, the existence of agglomeration economies should hold back telework. The first key tradeoff of the model is therefore the saving of commuting costs versus the foregone agglomeration economies.

Second, the effects of increasing WFH will percolate through changes in the production and consumption of buildings: More WFH reduces firms’ demands for office space but increases workers’ demands for living space since additional room is required to work from home (in the long run, most people won’t want to work in their bedrooms). In other words, wired workers need more space at home, which affects location choices and the residential construction sector. Concurrently, firms’ space requirements are strongly reduced, which also affects location choices and the office construction sector. As a result, the markets for land and buildings must occupy centre stage in research that aims to assess the global effects of telework on cities. Since real-estate and land markets are likely to adjust more slowly to economic changes than goods and labour markets, it is important to investigate both the short-run effects of telecommuting (when office and land markets have not yet adjusted) and the long-run effects (when the adjustments have taken place).

Third, how will telecommuting affect the distribution of income in the economy? There is a consensus in the literature that telecommuting characterizes predominantly college-educated workers and has a negative impact on individuals with low education or vocational training. It is thus likely to have substantial distributional impacts. College-educated workers and those in managerial and professional occupations are more likely to work at home and can do a significantly higher share of their work tasks from home. The highly skilled also suffer less productivity loss from remote working (Dingel and Neiman 2020), which should exacerbate income inequality.

We develop a general equilibrium model where three primary production factors (skilled workers, unskilled workers, and land) and three sectors (construction, intermediate inputs, and final consumption) interact to shape the economy. We study how different intensities of telecommuting affect the whole economy, paying particular attention to: (i) the reduction of commuting to the workplace in cities; (ii) changes in productivity brought about by the concentration of employment within offices and city centres; and (iii) the shifts in demand for larger residences and less office space, which triggers changes that percolate through housing and land markets.

Figure 1 GDP as a function of the WFH share, two different simulations. 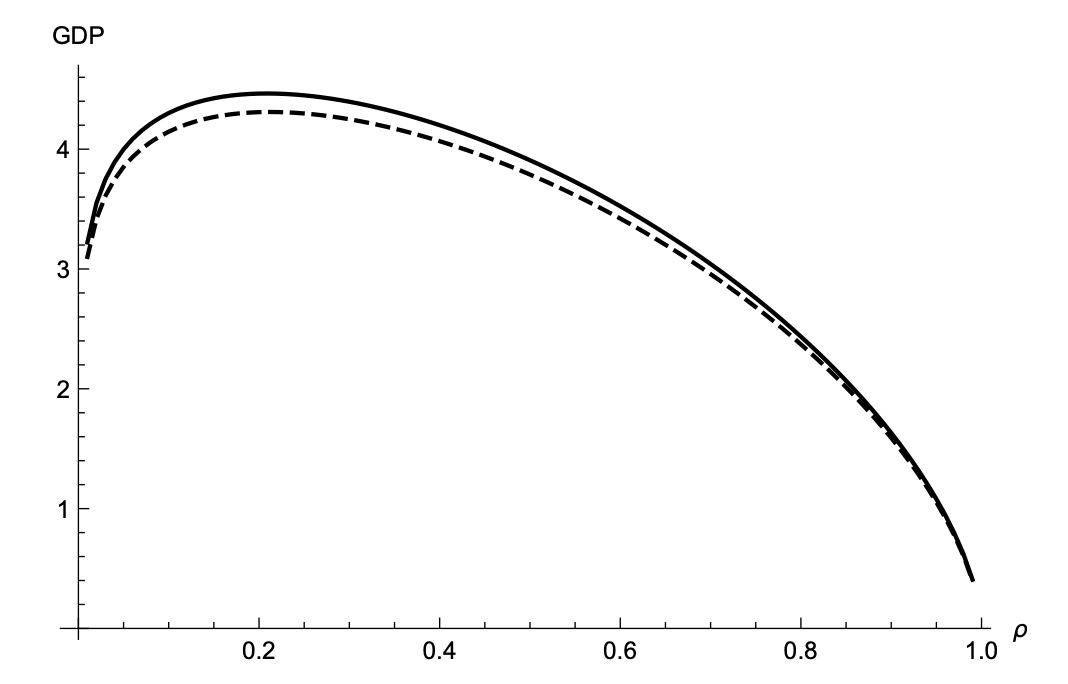 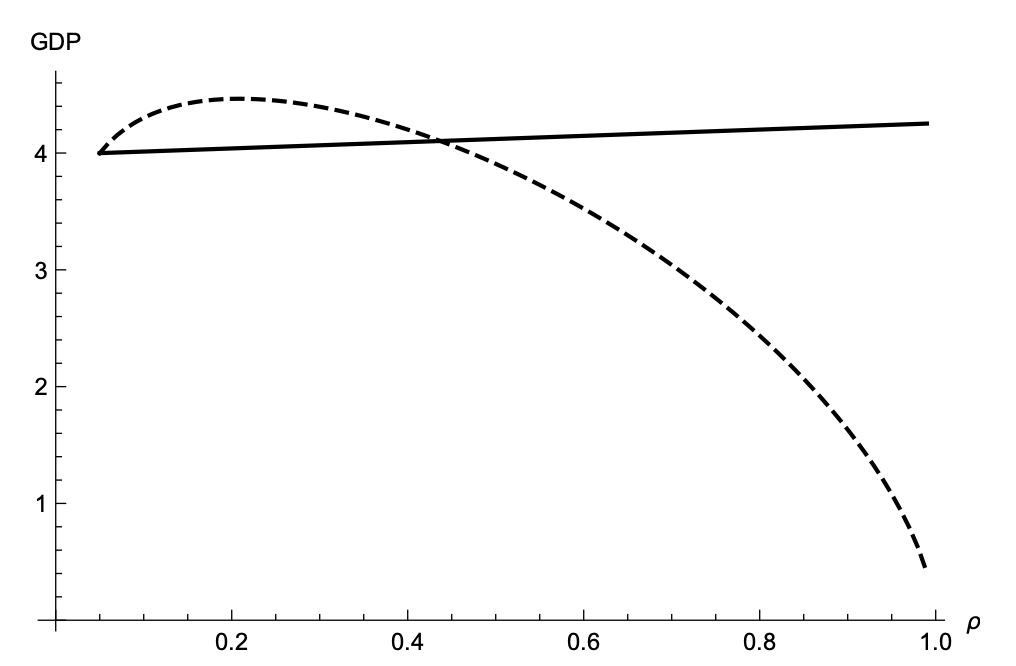 First, we find that the long-run effects of telecommuting are all described by bell-shaped curves: Telecommuting first increases skilled and unskilled workers’ productivity and GDP up to some threshold. Beyond that level, a higher share of home-workers reduces the strength of the knowledge and information spillovers which, therefore, do not produce desirable effects. Too much WFH may thus be detrimental to long-run innovation and growth due to limitations of information and communication technologies as well as foregone agglomeration economies in the form of face-to-face contact and knowledge spillovers.2 Figure 1 illustrates this point via some back-of-the-envelope computations using consensus parameter values. The WFH share that maximizes GDP varies between 20% and 40% in our simulations – one or two working days per 5-day week. This is broadly in line with recommendations made in human resource management (Gajendran and Harrison 2007).

To conclude, we find that more WFH is a mixed blessing. The relationship between telecommuting and productivity or GDP is an inverted U-shape, whereas telecommuting raises income inequality. Hence, WFH at a large scale is likely to be too much of a good thing.