Yves here. The headline is hyperventilating, since “humanity” does not equal “the entire world” but the piece does substantiate the claim that Brazil’s refusal to do much of anything about Covid is a train wreck that puts other countries at risk.

By DemocraciaAbierta, the global platform that publishes voices from Latin America and beyond in Spanish, Portuguese and English, connecting them to the global debate of openDemocracy. Twitter: @demoAbierta. Originally published at openDemocracy

The world is nearing the light at the end of the pandemic tunnel thanks to the effectiveness of mobility restriction, social distancing, usage of masks and the start of massive vaccination campaigns. However, there is a black hole on the planet, and its name is Brazil.

To add on top of the catastrophic denialism of President Jair Bolsonaro in the face of the virus, comes the variant that emerged in the state of Amazonas in northern Brazil, which has put the country – and the world – at risk. This development also provides lessons about COVID-19 and the crucial importance of taking epidemics seriously.

Known as P.1, the variant of the coronavirus that causes COVID-19 is not only more contagious, but preliminary studies suggest that it is also capable of infecting people who have already recovered from other versions of the virus.

The variant is believed to have emerged amid the chaos in Manaus, the most affected city, in terms of proportion, in the country with the world’s second highest COVID-19 death toll. And it is not all a coincidence.

Brazil is experiencing its most deadly period since it registered its first case in February last year. On 9 March, the country reported 1,954 deaths in 24 hours, the worst figure since the pandemic began. The situation in hospitals is cataclysmic, with ICU bed occupancy in 17 cities already at 100%.

Bolsonaro’s administration is largely responsible for all of this chaos, which has killed 270,000 Brazilians. As Robert Muggah of the Igarapé Institute has argued, his denialism in the face of the severity of the disease and inability to curb the outbreak, along with his anti-vaccine crusade, goes beyond creating a national tragedy – it has produced a global threat.

A Breeding Ground for New Variants

Political scientists are not only blaming Bolsonaro’s incompetence and resistance to handling the pandemic for Brazil’s current crisis. In an interview with The Guardian, neuroscientist Miguel Nicolelis from Duke University argues that the international community must intervene to put pressure on the Brazilian government for its inability to act.

Nicolelis explained that the situation in Brazil has created the perfect storm for variants. The virus has been given free reign to reproduce at levels that drive up the possibility of mutations thanks to its president denying its existence and questioning the usage of masks – even on one of the country’s highest mortality days. 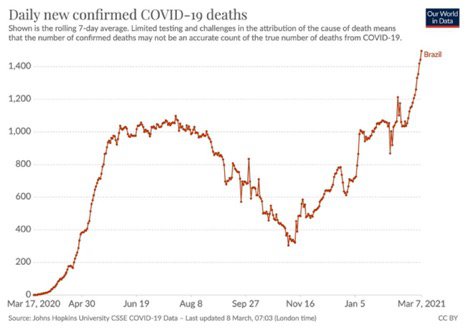 “If the virus is allowed to proliferate as it is now, it opens the door to the appearance of new mutations and the emergence of even more lethal variants,” Nicolelis said.

“What is the point of controlling the pandemic in Europe or the United States if Brazil continues to be a breeding ground for this virus? Brazil is an open-air laboratory for the virus to proliferate and end up creating more lethal mutations. This is about the world. It is global.”

Another aggravating situation in Brazil is the slowness of vaccination campaigns. Figures from this week show that the country has vaccinated just over 8 million people, equivalent to 4% of the population. According to specialists, at this rate it would take Brazil four years to reach collective immunity. 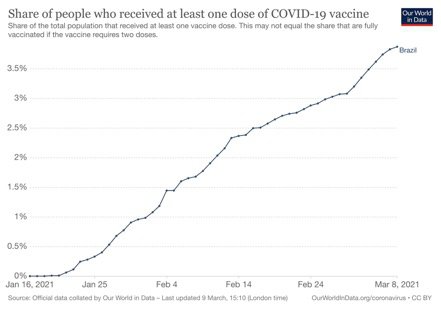 At a recent meeting, the Pan-American Health Organization (PAHO) criticised the slow pace of the vaccination campaigns throughout Latin America, warning about the risks of more resistant variants emerging.

This occurs, among other reasons, because contact between people who have received the vaccine encourages the emergence of “super-potent” mutations capable of evading the action of the immuniser, according to researchers from Imperial College London and the University of Leicester. For this reason, the researchers say it is imperative to combine vaccination plans with shutdowns and other measures to contain the virus.

In Brazil, this slowness is compounded by variants such as the E484k mutation that evades antibodies and high levels of contagion due to the lack of preventive measures. Since January, several countries have closed their borders to Brazil to prevent the arrival of dangerous variants.

From the start of the pandemic, Bolsonaro insisted that his country could not stop due to a “little cold”, claiming that the economic consequences would be worse. However, he clearly miscalculated the true cost.

“The root of our problem, what affected us the most this year, was the mismanagement of the vaccination,”said Ronaldo Patah, a market strategists at UBS Wealth Management. “If the government had closed deals back there, the Ibovespa would have been near the peak, at 125,000 points, and not at 112,000 points.”

Last year, the Brazilian government rejected a proposal from the pharmaceutical company Pfizer to supply 70 million doses of vaccines. The health ministry claimed that it had taken this decision to avoid falling into a “marketing” scheme involving the vaccine producers.

Patah said that if the government had purchased the doses back in September last year, Brazil could currently be vaccinating at a rate similar to that of the United States.

Although Bolsonaro cannot be held responsible for the entire complex process of virus mutation and the development of a pandemic unprecedented in modern history, it is more than evident that his government could have contained the worsening situation through the implementation of simple measures that proved to be effective in many countries.

However, his ultra-conservative idea that the economic consequences of restrictive measures would be worse than the deaths of citizens revealed his absolute disregard for the popular classes, as well as strong structural racism.

The conviction, so far ratified by the polls, that whatever is done the majority will continue to vote for him, makes Bolsonaro feel supported in his lethal policy.

But neither the country nor the world can wait for the next election to see a change in the Brazilian government’s attitude. Only coordinated international pressure can ensure that dangerous new variants are curbed and thousands of lives are saved, not only in Brazil, but worldwide.