Yves here. I’m in the mood for a silly post, but a collection of stuck ship memes is now yesterday’s news. So how about Godzilla (and Kong)?

First, we have used Godzilla as a reference point, by sometimes describing brawls between big uglies as Godzilla v. Mothra. But second, I’m fond of Godzilla. Even though Ray Harryhausen is only Godzilla-adjacent (he got a lifetime Oscar award for doing special effects in the days when special effects were no good), I have a soft spot for all dinosaur-like monsters by virtue of my brother, the first published author in our family, having written The Dinosaur Films of Ray Harryhausen, a classic for B-movie fans. He was invited to speak at sci-fi and horror film conferences after his book came out. Third, Godzilla is cute. He made for a very nice lighter I had to buy when it showed up at my local newspaper stand (not only did flame shoot out his mouth but his eyes lit up). Fourth, most people underestimate the size of the fanbase for these, um, classics. What TV show can you name that has been on the air for over 50 years? In the US, we have the cable channel MeTV (Me = “Memorable Entertainment”) currently featuring Svengoolie, which has run weekly since 1970 (initially just on Chicago local TV), featuring sci-fi and horror classics. This is simply brilliant. The show costs almost nothing to produce, clearly has a loyal followers, and the current Svengoolie has been in the role since 1979!

And if this movie Godzilla gets to spit fire (or as the post indicates “atomic breath”) like my little lighter of many years past, that look like it tips the balance. Yes, that lighter did go to my brother, as much as I wanted to keep it. 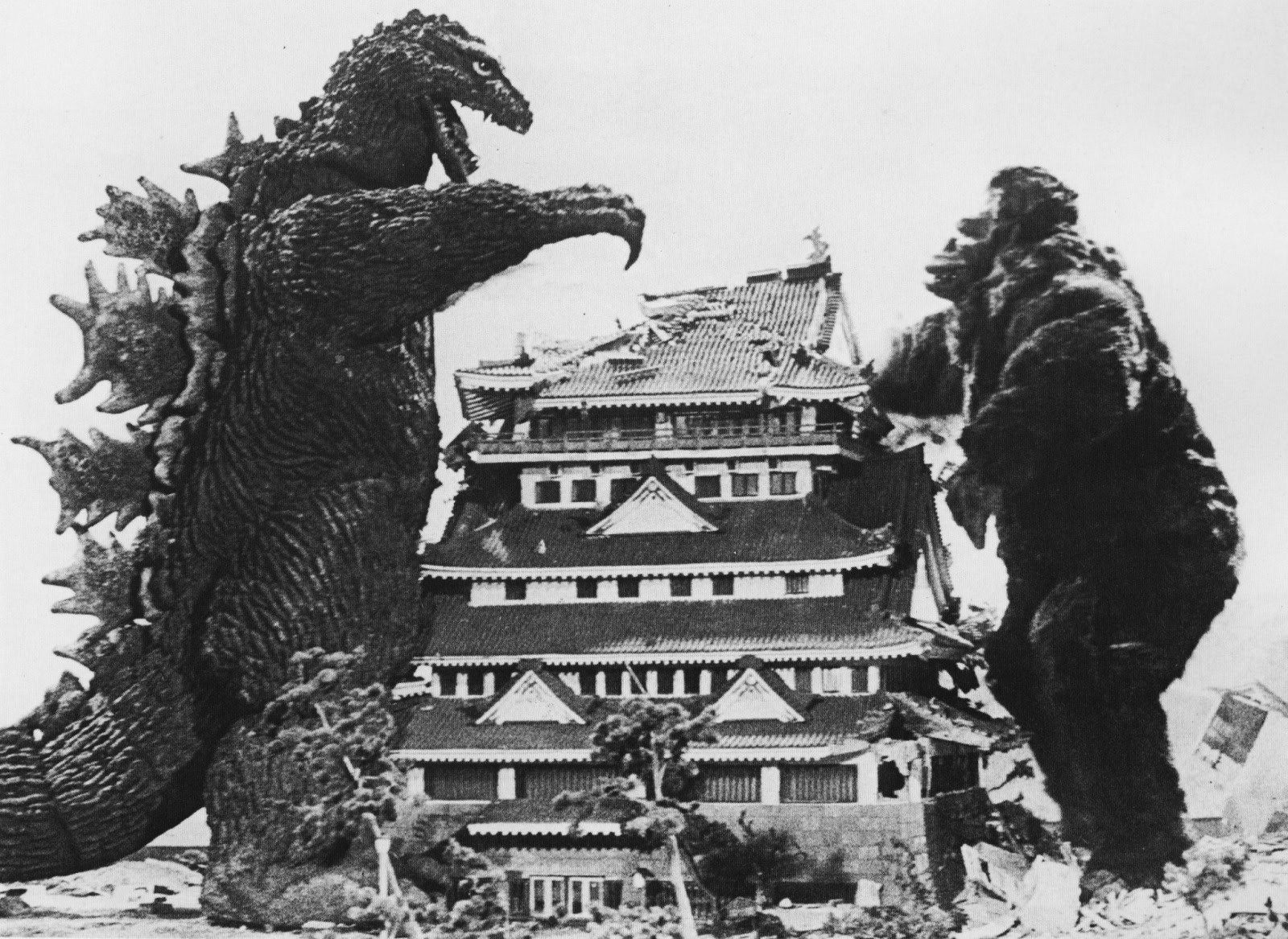 The 2021 film “Godzilla vs. Kong” pits the two most iconic movie monsters of all time against each other. And fans are now picking sides.

Even the most fantastical creatures have some basis in scientific reality, so the natural world is a good place to look to better understand movie monsters. I study functional morphology – how skeletal and tissue traits allow animals to move – and evolution in extinct animals. I am also a huge fan of monster movies. Ultimately, this is a fight between a giant reptile and a giant primate, and there are relative biological advantages and disadvantages that each would have. The research I do on morphology and biomechanics can tell us a lot about this battle and might help you decide – #TeamGodzilla or #TeamKong?

First it’s important to acknowledge that both Kong and Godzilla are definitely far beyond the realms of biological possibility. This is due to sheer size and the laws of physics. Their hearts couldn’t pump blood to their heads, they would have temperature regulation problems and it would take too long for nerve signals from the brain to reach distant parts of the body – to name just a few issues.

However, let’s assume that somehow Godzilla and Kong are able to overcome these size limitations – perhaps because of their radiation exposure they have distinctive mutations and characteristics. Based on how they look on the big screen, let’s explore the observable differences that might prove useful in a fight.

Kong: The Best of Ape and Man

At first glance, Kong is a colossal primate – but he’s not simply a giant gorilla. 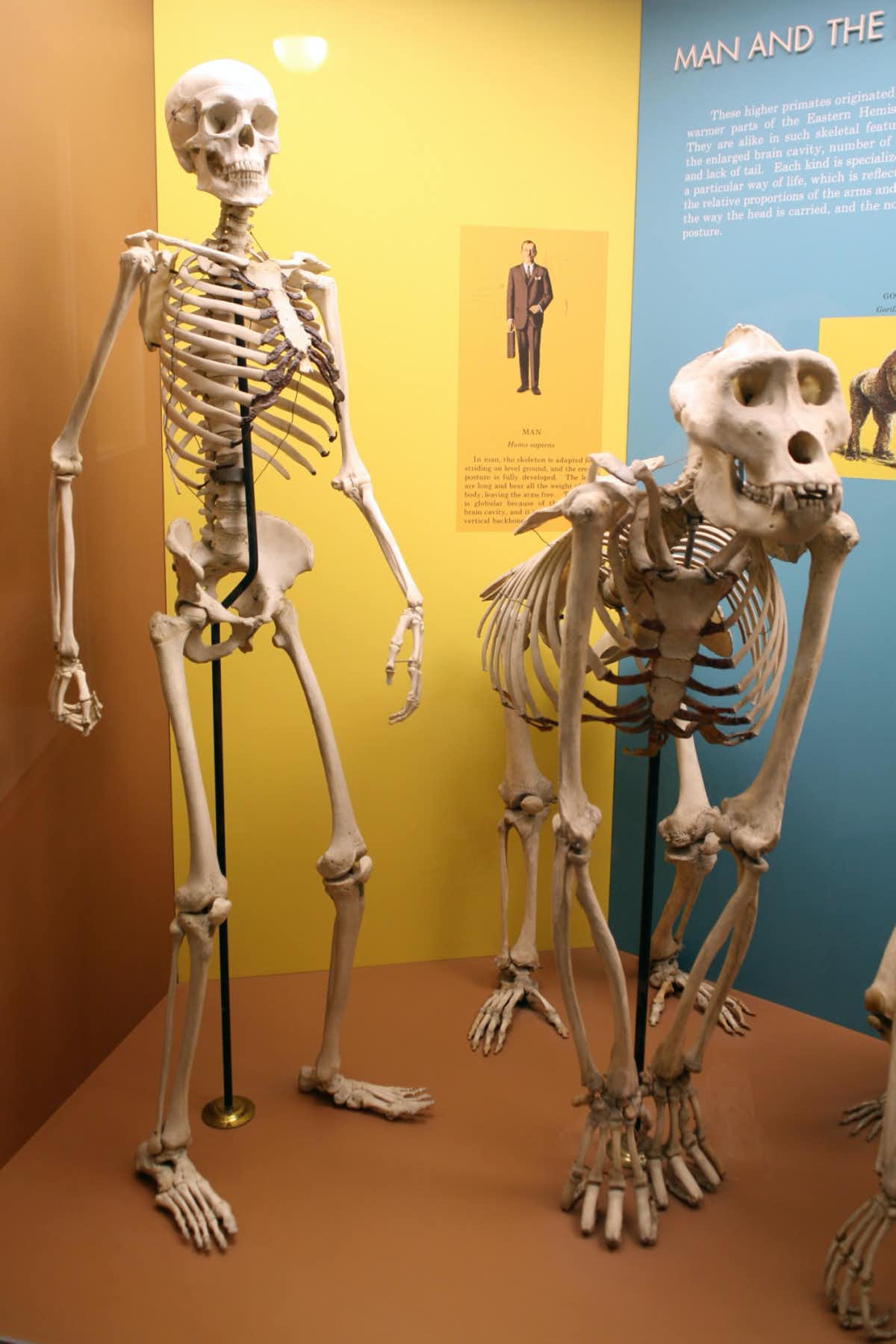 One of the most striking things about Kong is his upright, bipedal stance – he mostly walks on two legs, unlike any other living nonhuman apes. This ability could suggest close evolutionary relationship to the only living upright ape, humans – or his upright stance could be the result of convergent evolution. Either way, like us, Kong has thick muscular legs geared toward walking and running, and large free arms with grasping hands, enabling him to use tools.

Humanity’s bipedal, upright posture is unique in the animal kingdom and provides a slew of biomechanical abilities that Kong might share. For example, human torsos are highly flexible and particularly good at rotation. This feature – in addition to our loose shoulder girdle – makes humans the best throwers in the animal kingdom. Throwing is helpful in a fight, and Kong could probably throw with the best of them.

Kong is also, of course, massive. He absolutely dwarfs the largest known primate, an extinct orangutan relative called Gigantopithecus that was a bit bigger than modern gorillas.

Kong does have many gorillalike attributes as well, including long muscular arms, a short snout with large canine teeth, and a tall sagittal crest – a ridge of bone on his head that would be the anchor point for some exceptionally strong jaw muscles.

Strong, agile, comfortable on land and with the unparalleled ability to use tools and throw, Kong would be a brutal force in a fight. 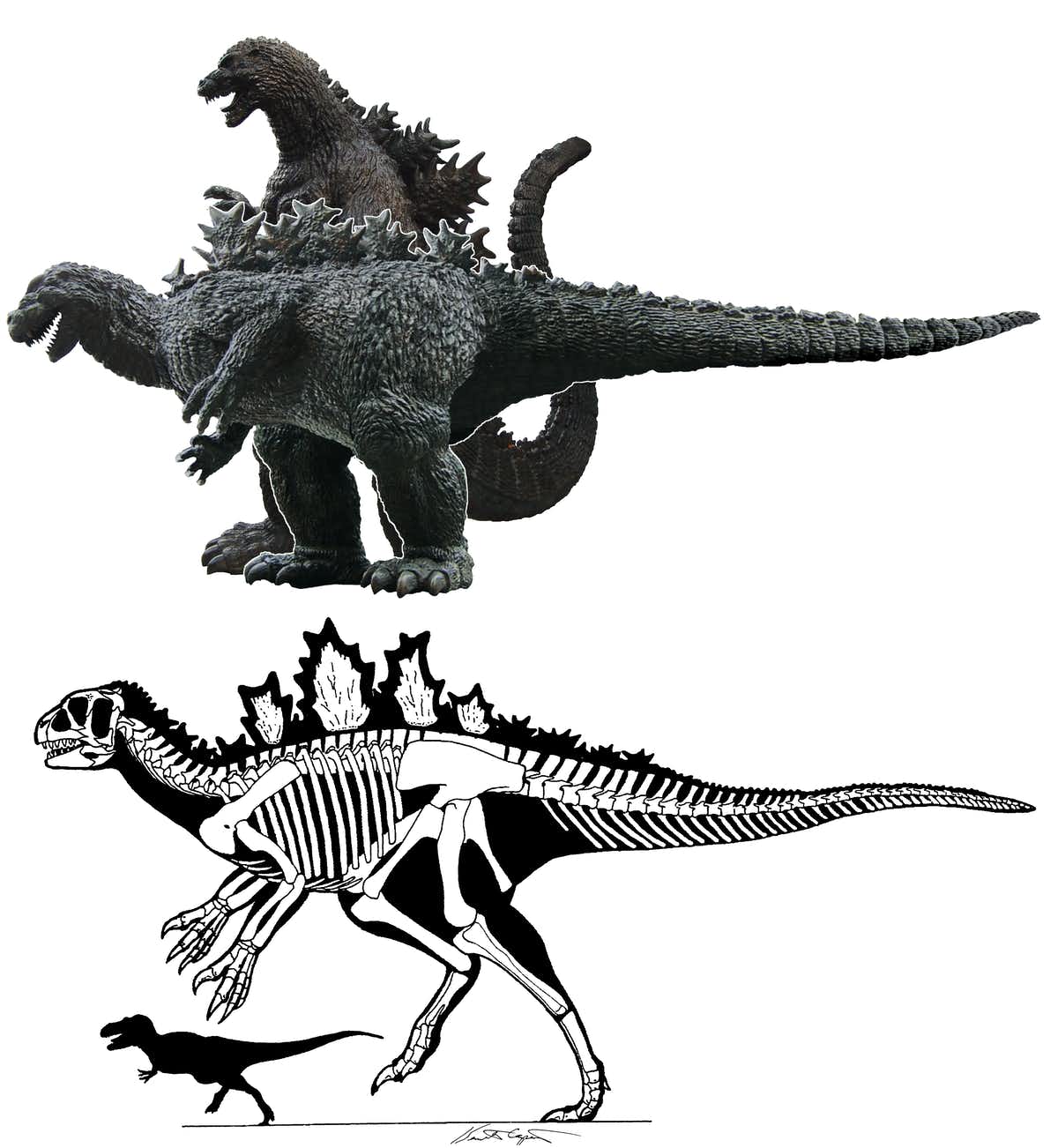 Godzilla: An Aquatic Lizard to be Reckoned With

Godzilla appears to be a giant, semiaquatic reptile. Like Kong, Godzilla has the traits of a few different species.

Recent Godzilla movies show him decently mobile on land, but seemingly much more comfortable in the water despite his lack of overt aquatic features. Interestingly, Godzilla is depicted with gills on his neck – a trait that land vertebrates lost after they emerged from the sea about 370 million years ago. Given Godzilla’s terrestrial features, it’s likely that his species has land-dwelling reptile ancestors and reevolved a mostly aquatic lifestyle – kind of like sea turtles or sea snakes, which can actually absorb oxygen through their skin in water. Godzilla may have uniquely reevolved gills.

Godzilla’s tail is what really separates him from Kong. It is massive, and anchored and moved by huge muscles attached to his legs, hips and lower back. Dinosaurs like Tyrannosaurus rexstood horizontally and used their tails for balance and to help them walk and run. Godzilla, in contrast, stands vertically and keeps his tail low to the ground, probably for a different type of balance. This vertical posture is unique for a two-legged reptile and more resembles a standing kangaroo. Godzilla stands on two muscular, pillarlike legs similar to those of a sauropod dinosaur. These would provide stability and help support his gargantuan mass but would also bolster the strength of his tail.

In addition to his powerful tail, Godzilla carries three rows of sharp spikes going down his back, thick scaly skin, a relatively small head full of carnivorous teeth and free arms with grasping hands, all built onto a muscular body. Taken together, Godzilla is a terrifying and intimidating adversary. 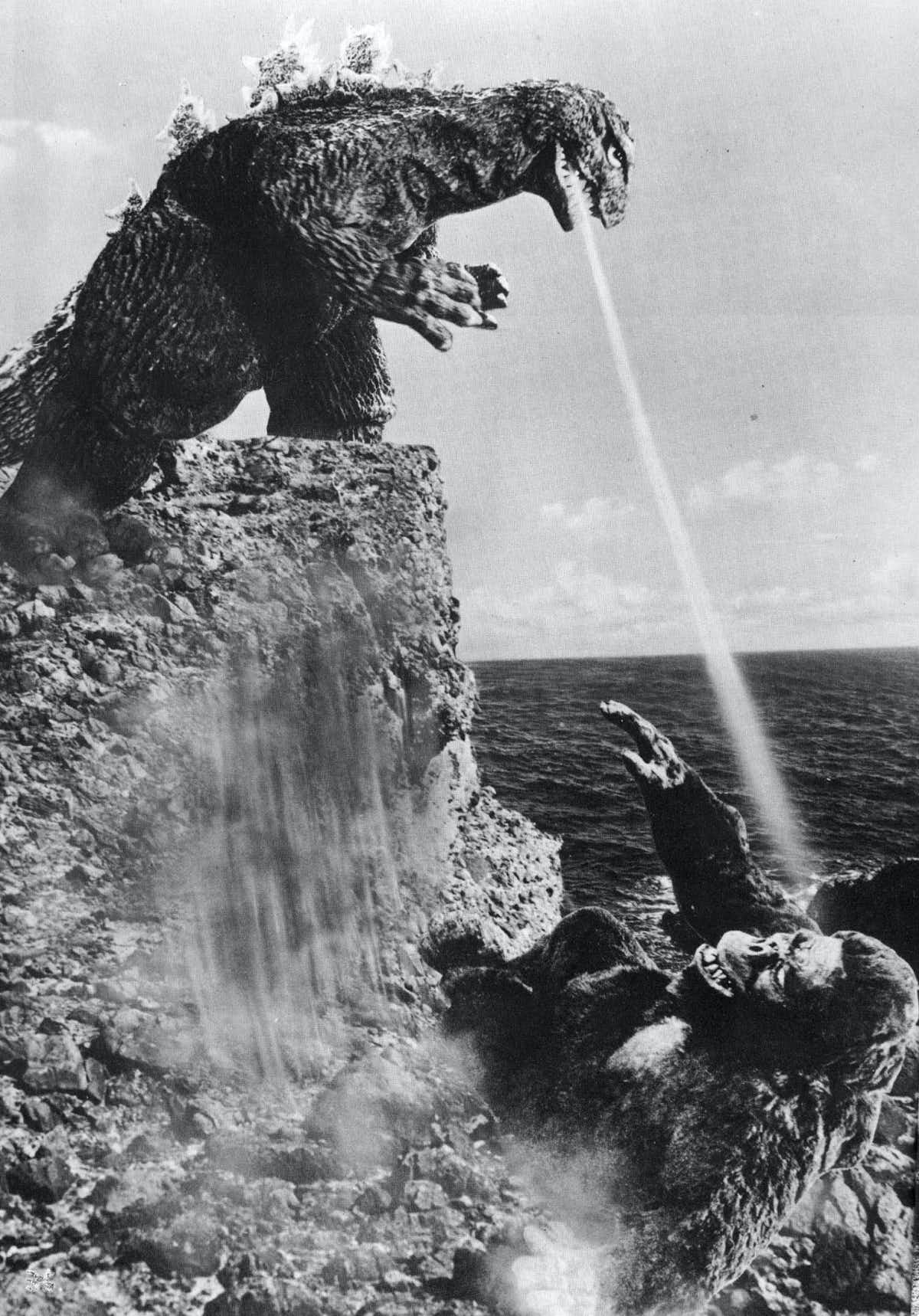 So now that we’ve looked a little closer at how Godzilla and Kong are built, let’s imagine who might emerge victorious in battle.

Though Kong is a little bit smaller than Godzilla, both are more or less comparably massive in size and neither has a clear advantage here. So what about their fighting abilities?

Godzilla would likely favor his robust tail for both offense and defense – much like modern-day large lizards that use their strong tails as whips. Scale up that strength to Godzilla’s size, and that tail becomes a lethal weapon – which he has used before.

However, Kong is more comfortable on land, faster and more agile, can use his strong legs to jump, and possesses much stronger arms than Godzilla – Kong probably packs a walloping punch. And as an ape, Kong would also likely use tools to some degree and might even capitalize on his throwing ability.

Both would have a gnarly bite, with Kong likely getting a slight advantage. However, Godzilla’s bite is by no means weak, and all of his teeth are flesh-piercing, similar to crocodile and monitor lizard teeth.

On defense, Godzilla has the edge, with thick scaly skin and sharp spikes. He might even act like a porcupine, turning his back to a rapidly approaching threat. However, Kong’s superior agility on land should be able to offer him some protection as well.

I will admit I am #TeamGodzilla, but it’s very close. I may give a slight edge to Kong in broad terrestrial battle ability, but Godzilla’s general mass, defense and tail would be hard to overpower. And lest we forget, the tipping point for Godzilla is that he has atomic breath! Until researchers find evidence of a dinosaur or animal with something like that, though, I will have to reserve my scientific judgment.

Regardless of who emerges victorious, this battle will be one for the ages, and I am excited as both a scientist and monster movie fan.