Yves here. Normally we relegate sexual and “right to choose” matters to Links or Water Cooler, since they are a bit wide of our normal finance/political economy focus. But since we’ve been covering health care and scientific legitimacy more, both as a result of Covid as well as America’s out of control medical-industrial complex, this story seemed germane as ideologically-driven promotion of dangerous quackery. I find it hard to fathom how doctors involved in this “abortion reversal” scam live with themselves, although I may have become desensitized to rampant profit-driven abuses, ranging from spinal fusion surgery to rampant overprescription of steroids.

What is distressing about this anti-abortion malpractice is that some US state require doctors to “inform” patients about this snake-oil option, and that its big booster, Heartbeat International, has devised ways to violate medical laws in many countries by not only touting this bad practice but also steering young women to illegal prescription providers.

These people deserve to burn in a private hell.

By Claire Provost, global investigations editor at openDemocracy, focused on our project Tracking the Backlash against women’s and LGBTIQ rights. Find her on Twitter: @claireprovost. Originally published at openDemocracy

Doctors in at least a dozen countries, supported by US Christian Right activists, are providing women with a “dangerous” and controversial treatment that claims to “reverse” medical abortions, openDemocracy can reveal today.

Women’s health and rights activists have called for urgent investigation by authorities into these findings – which were described as “horrific” especially during the pandemic when it’s critical for people to trust healthcare providers.

openDemocracy undercover reporters on four continents contacted a hotline run by US Christian Right activists and were connected to doctors willing to prescribe so-called ‘abortion pill reversal’ by phone or email. Where hotline operators could not make connections to local doctors, they emailed reporters dosage instructions.

European and British parliamentarians called these activities “completely unacceptable” and “deeply worrying” and said they must be “shut down”.

So-called ‘abortion pill reversal’ (APR) treatment was invented by an anti-abortion doctor in California. The only trial into the ‘treatment’ was halted in 2019 after some participants were sent to hospital with severe haemorrhaging. The trial’s lead researcher said “It wasn’t safe for me to expose women to this treatment.”

No medical authorities in the countries in this investigation have approved or recommended this ‘treatment’, which involves taking high doses of progesterone, a hormone, following the first of two pills used for a medical (or medication) abortion.

Progesterone in itself is not a dangerous drug but there are concerns, including some from health authorities, about using it in this ‘treatment’. A UK Royal College of Obstetricians and Gynaecologists spokesperson referred openDemocracy to the US study which it said showed that APR is “associated with a high risk of serious bleeding and consequently dangerous for women, as well as ineffective.”

In the US – where some conservative state governments have passed laws requiring that doctors inform women about this ‘treatment’ – the American College of Obstetricians and Gynecologists has called these laws “based on unproven, unethical research” and “dangerous to women’s health”.

Medical (as opposed to surgical) abortions, have become increasingly common in some countries during COVID-19. Some governments have changed rules to make it easier for women to access these abortions via online appointments.

‘Abortion pill reversal’ proponents oppose such changes, suggesting that treatment provided online is risky, even though they provide theirs in a similar way.

In the UK, the doctor that the US-run hotline connected our reporter to responded to questions about possible health risks from ‘abortion pill reversal’ treatment, saying: “At the end of the day, you live in the UK, you’ve got a hospital there and if you were worried about the bleeding, you’d go get help.”

In South Africa, a doctor told our reporter to go to any pharmacy, get them to call him from there, and that he’d give the necessary prescription over the phone.

In Uruguay, a doctor told our reporter there is “no reason for fear” and that “there are studies” proving that this ‘treatment’ works, though it is not “standard practice”.

In Mexico, a doctor who described himself as an “APR volunteer” emailed our reporter a handwritten prescription including his medical licence number.

Each of our undercover reporters contacted the 24-hour ‘abortion pill reversal’ hotline – run by the US Christian right group Heartbeat International – either by telephone or by using the online chat function on the hotline’s website.

Each reporter was emailed a copy of the same ‘consent form’ – produced by Heartbeat – stating that they understand APR is an “off-label use of progesterone” and should “seek emergency medical care immediately” if they are in pain. 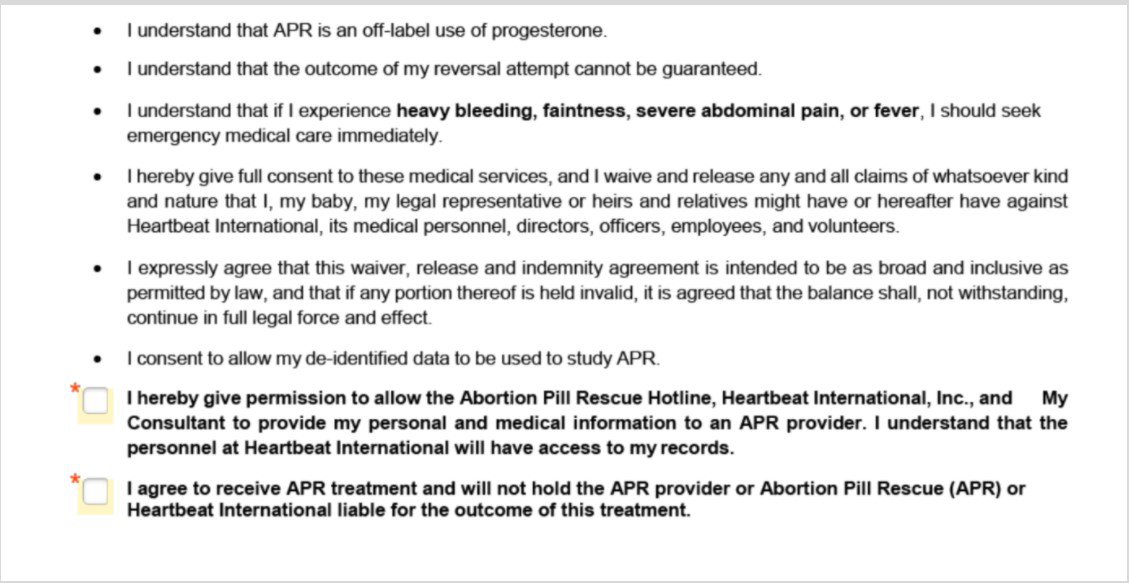 Screenshot of consent form sent to our undercover reporters.

Mina Barling, director of external relations at the International Planned Parenthood Federation (IPPF), said openDemocracy’s findings are “another terrifying example of just how well funded and how radicalised this anti-woman movement is”.

Elizabeth Nash from the Guttmacher Institute, a US reproductive health research group, said it is “incredibly distressing that this kind of misinformation is being exported around the world”, apparently under the radar of medical authorities.

Pamela Merritt, executive director of US Medical Students for Choice, called the ‘treatment’ a “direct violation of the oath that every physician takes”, referring to pledges to do no harm and uphold ethical standards.

It is unclear how many women have tried these treatments globally. In some countries, APR appears more established, while in others it seems to be just getting started, with doctors more recently involved.

In August 2020, Heartbeat International claimed that 60 women in the UK had requested these treatments since the start of the year (about seven months).

Last year in Canada an anti-abortion group advertising the number for Heartbeat’s hotline on Twitter claimed that 105 women had started the ‘treatment’ after calling.

“You are the first client I personally have worked with in Germany, but we have assisted many women all over Europe,” a US-based nurse told an openDemocracy undercover reporter who contacted the hotline from that country.

That nurse then emailed our reporter instructions and dosage information for a prescription to take to a local hospital or pharmacy to get the medication.

The Heartbeat International group that runs the hotline also has a large global network of affiliated anti-abortion ‘crisis pregnancy centres’ – which openDemocracy revealed last year use misinformation in their efforts to discourage women from ending their pregnancies under any circumstances.

Melissa Upreti, special rapporteur for the UN working group against discrimination against women and girls, said openDemocracy’s findings about the spread of ‘abortion pill reversal’ globally “are concerning as they indicate that women’s lives are being put in jeopardy by misinformation and harmful practices.” 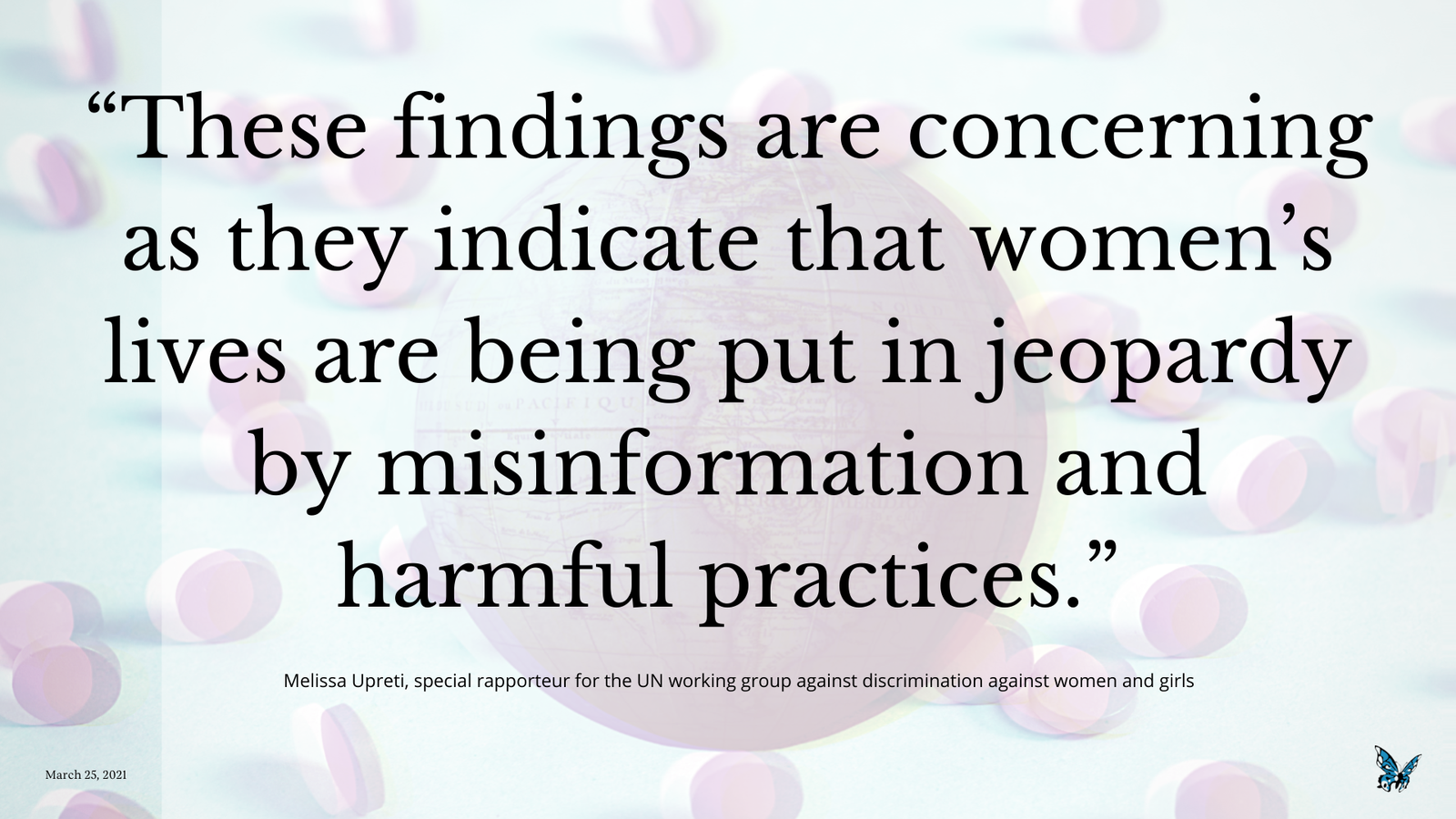 “When we provide a treatment off-label, it is only with evidence to show a benefit and no harm. Otherwise, the treatment is considered experimentation,” Mitchell D Creinin, the lead researcher on the cancelled US study, told openDemocracy.

The Heartbeat-produced consent form given to our undercover reporters, Creinin said, “is a joke because this treatment should only be provided under a study protocol to see if it is safe for everyone […] and effective.”

In response to questions from openDemocracy, Heartbeat International said APR is “a cutting-edge application of a time-tested, FDA-approved treatment used for decades to prevent miscarriage, preterm birth, and support ongoing pregnancy.”

The group suggested that Creinin is biased towards abortion access and claimed his study “actually showed that the abortion pill carries major health risks.”

“More than 2,000 women have successfully stopped an abortion and saved their children through the life-saving intervention of APR,” it claimed.