Yves here. Climate change damage is looking so likely that investors are finally having a think about how to price that in. And since bond investors are risk averse and at least some look out a bit on the investment horizon, the bigger impact may be felt there first. Bear in mind that ratings agencies are laggards on downgrades; they tend to validate concerns Mr. Market has already registered.

I’m not all that keen about AI-based approaches (and focusing on sovereign bond ratings without understanding fiat currency issuers), but any stab at this issue is bound to provoke more modeling and study.

And I’m not sure about thinking of bond ratings and 2100. Potable water supplies become scarce by 2050, if not sooner. Drought and resource wars have the potential to redraw a lot of national boundaries even if we steer clear of collapse or near collapse scenarios. The Jackpot, sadly, is coming.

Enthusiasm for ‘greening the financial system’ is welcome, but does the explosion of ‘green’ finance indicators reflect the science? This column reports research that uses artificial intelligence to construct the world’s first ‘climate smart’ sovereign credit rating. The results warn of climate-driven downgrades as early as 2030.

Climate change is “the biggest market failure the world has seen” (Stern 2008), with wide-ranging implications for stability – financial, economic, political, social and environmental. As estimates of the economic consequences of climate change continue to grow, financial markets and business leaders face increasing pressure to factor climate risks into decision-making.

Climate change will hit markets from all directions. In boardrooms and at AGMs, what were once token whispers of eco-marketing have become serious discussions of extreme weather events, reputational risks, activist movements (from shareholders and consumers), regulatory and transition risks, asset stranding and environmental litigation. In response, investors and regulators are calling for climate risk disclosures and a clear demonstration that portfolios and business models are consistent with the Paris Climate Agreement. Central bankers,1 finance ministers,2 the IMF3 and UN4 are in on the action (e.g. Brunnermeier and Landau 2020).

All this enthusiasm for ‘greening the financial system’ is welcome, but a fundamental challenge remains: financial decision-makers lack the necessary information (e.g. Edmans 2021). It is not enough to know that climate change is bad. Markets need credible, digestible information on how climate change translates into material risks. Instead, an explosion of environmental, social and governance (ESG) ratings and voluntary, ad hoc, unregulated corporate climate disclosures has created a confusing world of unfamiliar, incomparable, and conflicting metrics.

A chief concern is the lack of scientific foundations in risk disclosures (e.g. Fiedler et al 2021). It is easy to see why. Climate models operate at global scales and project impacts over decades and centuries. Financial models do not. How should a high-frequency trading algorithm (think nanosecond resolution) adjust to the possibility that climate may reduce global output in 2100 by 10%? How should corporate climate disclosure address issues largely beyond their control, such as the carbon intensity of the national electricity grid, or the direction of government flood strategies?

Most disclosures present companies as if they are independent of their physical (geographical) and macroeconomic surroundings. But this ignores crucial context. Climate change does not just affect firms individually, it affects countries and economies systemically. No corporate climate risk assessment is complete without also considering the effect of climate on sovereigns. Without scientific credibility, economic evidence and decision-ready metrics, the field of green finance is open to charges of greenwash.5 Getting it wrong will be costly.

This is what motivated us to bridge the gap between climate science and real-world financial indicators (Klusak et al 2021). Rather than constructing a new metric, we focused on one that is eminently familiar to financial decision-makers: the sovereign credit rating.6 By linking climate science with economic models and real-world best practice in sovereign ratings, we simulate the effect of climate change on sovereign credit ratings for 108 countries under three different warming scenarios (see Figure 1).

We were guided by a single overarching principle: to remain as close as possible to climate science, economics and real-world practice in the field of sovereign credit ratings. To the best of our knowledge, we are the first to simulate the effect of future climate change on sovereign credit ratings. Our approach means we can evaluate the effect of climate on ratings under various climate-economic scenarios and can provide initial estimates of the effects of climate-induced sovereign downgrades on the cost of public and corporate debt around the world.

Figure 1 Bridging the gap between climate science and financial indicators

To this end, we develop a random forest machine learning model to predict sovereign credit ratings and training it on ratings issued by S&P (one of the largest credit ratings agencies) from 2015 to 2020. Next, we combine climate economic models and S&P’s own natural disaster risk assessments to develop a set of climate-adjusted data describing various warming scenarios. We feed these climate-adjusted macroeconomic data into our ratings prediction model to simulate the effect of climate change on sovereign ratings. Finally, we calculate the additional cost of corporate and sovereign capital due to climate-induced sovereign downgrades (Figure 1, purple).

We focus on sovereign ratings because they are decision-ready. This is distinct from ESG ratings, which, even if backed by credible science, still require investors to determine how they relate to material risk. In contrast, sovereign ratings are already used in a range of financial decision-making contexts (for example, under Basel II rules, ratings directly affect the capital requirements of banks and insurance companies). They cover over US$66 trillion in sovereign debt, acting as ‘gatekeepers’ to global financial markets. Sovereign downgrades increase the cost of both public and corporate debt, influencing overall economic performance and significantly affecting fiscal sustainability.

We document three key empirical findings. In contrast to much of the climate-economics literature, we find material impacts of climate change as early as 2030. Under RCP 8.5 (a high emissions scenario that closely traces recent historical emissions), we find that 63 sovereigns suffer climate-induced sovereign downgrades of approximately 1.02 notches by 2030, rising to 80 sovereigns facing an average downgrade of 2.48 notches by 2100 (on a 20-notch scale).

Figure 2 depicts the magnitude and geographical distribution of sovereign ratings changes predicted by our model by 2100 under RCP 8.5, showing that the most affected nations include Chile, China, Slovakia, Malaysia, Mexico, India, Peru and Canada all exceeding 5 notch downgrades. More importantly, our results show that virtually all countries, whether rich or poor, hot or cold, will suffer downgrades if the current trajectory of carbon emissions is maintained. 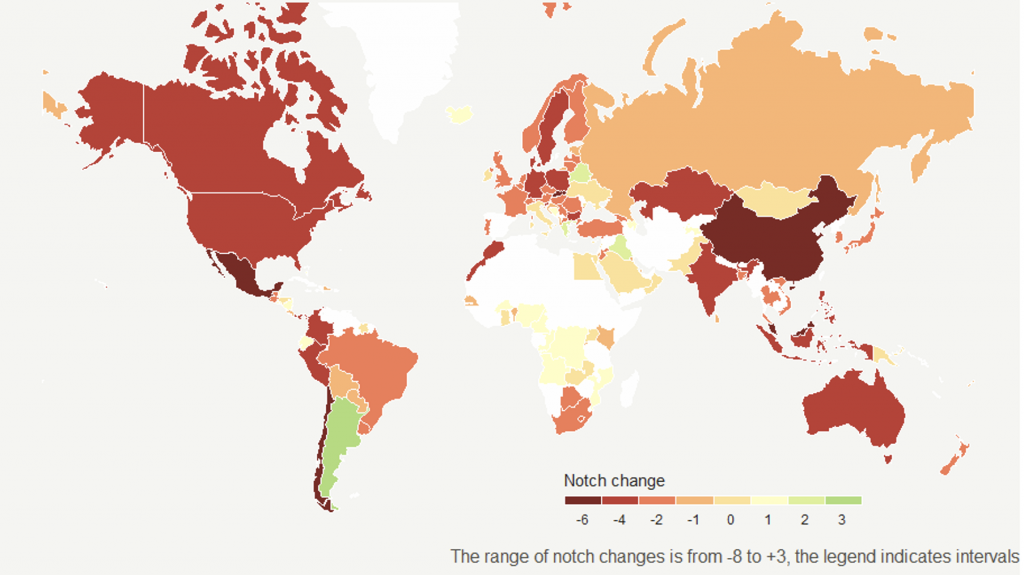 Second, our data strongly suggest that stringent climate policy consistent with the Paris Climate Agreement will result in minimal impacts of climate on ratings – with an average downgrade of just 0.65 notches by 2100. Figure 3 shows that the most affected countries are Chile and China with climate-induced sovereign downgrades of 2.56 and 2.05 notches, respectively. 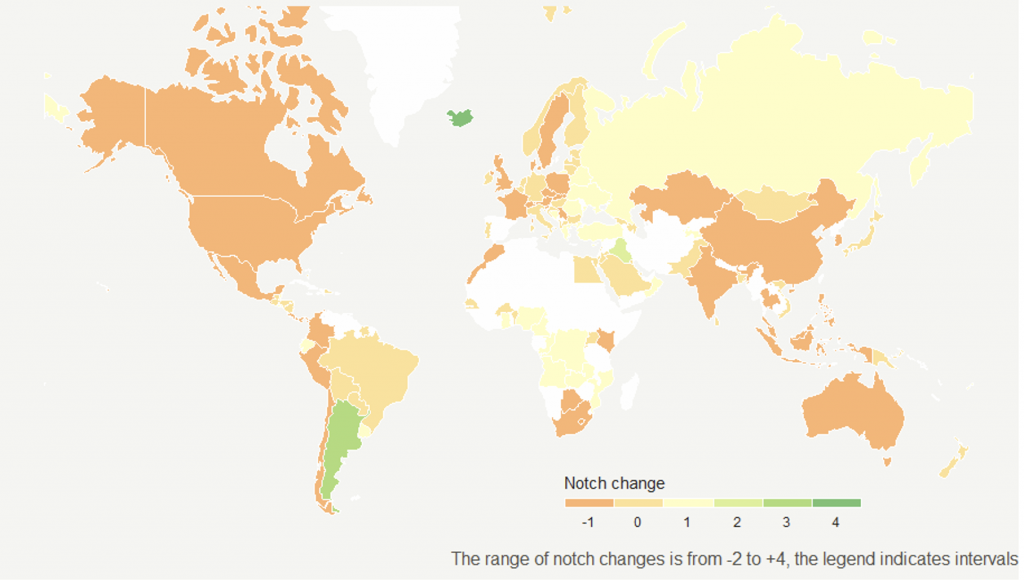 There are caveats. Due to a lack of scientifically credible quantitative estimates of how climate change will impact social and political factors, these are excluded from our model (Oswald and Stern 2019). Thus, our findings should be considered as conservative.

Moreover, our results should be understood as scenario-based simulations rather than predictions. High emissions scenarios (e.g. RCP8.5) closely track recent observed trajectories and remain useful over near- to midterm timescales (Schwalm et al 2020). But the pace of renewables deployment and climate policy (e.g. regulations banning sales of new petrol and diesel vehicles) offer hope that future trajectories may fall closer to low emissions scenarios such as RCP 2.6 (Hausfather and Peters 2020). We do not comment on the relative probabilities of any given warming scenario playing out in practice.

Despite these caveats, our results are qualitatively similar when changing the time series of ratings used to train the prediction model, restricting the sample to investment grade sovereigns, and varying assumptions about the degree of temperature volatility within the baseline climate-economic model.

The key take-home messages are that it is possible to ‘do climate finance’ without compromising on scientific credibility, economic rigour or decision-readiness. Existing climate science and economics can support credible, decision-ready green finance indicators. This research is of interest to investors, sovereigns and credit ratings agencies alike. Governments issue ever-longer dated bonds, of which life insurance companies and pension funds are eager buyers, thus enabling them to match their own long-term liabilities. Therefore, investors should consider the long-term creditworthiness of sovereign issuers.

Currently there is no reliable yardstick for assessing sovereign creditworthiness beyond the current decade and this research fills this gap. Data on adaptation and resilience will be increasingly important. National statistical offices could play a decisive role, using the recently adopted UN System of Environmental Economic Accounts – Ecosystem Accounts (SEEA-EA)7 as a framework for tracing environmental investments and expenditure.

Our study offers a first methodological approach to extend the long-term rating to an ultra-long-term reality. Based on the methodology applied here, future research could focus on developing ultra-long ratings not only for sovereigns but also for other issuers including corporates.