Yves here. While the level of stock market leverage, in the form of margin borrowing, isn’t quite at the level of the eve of the financial crisis, it’s still getting to warning signal levels. Recall that the financial crisis was not even remotely a stock market crisis; it was a derivatives crisis. Even though the unwinding of the housing bubble by itself would have hit the economy hard, almost certainly worse than the nasty (but short) recession of the early 1990s, it was derivatives that produced leverage on top of the housing market borrowing, above all on the weakest subprime debt, and the implosion produced the conflagration of September 2008, after three acute phase where the officialdom only papered over the symptom.

In other words, the stock market leverage that Wolf chronicles below isn’t sufficient in scale or type to cause a financial crisis. But it is symptomatic of far too much liquidity washing through the financial system. Experts talked about the “wall of liquidity” in the year before the crisis entered its first acute phase, in July 2007. I’ve not yet heard of the sort of leverage on leverage that set up the last blowup occurring now, but that doesn’t mean that it isn’t starting to happen.

In the current craze that encompasses everything from sneakers and NFTs to stocks, where valuations don’t matter because of widespread certainty that valuations will be even greater in a few days, and where folks are chasing lottery-type returns, supported by the Fed’s interest rate repression and $3 trillion in asset purchases, and by the government’s trillions of dollars of handouts and bailouts – well, in this perfect world, there is a fly in the ointment: Vast amounts of leverage, including stock market leverage.

In February, margin debt jumped by another $15 billion to $813 billion, according to FINRA. Over the past four months, margin debt has soared by $154 billion, a historic surge to historic highs. Compared to February last year, margin debt has skyrocketed by $269 billion, or by nearly 50%, for another WTF sign that the zoo has gone nuts: 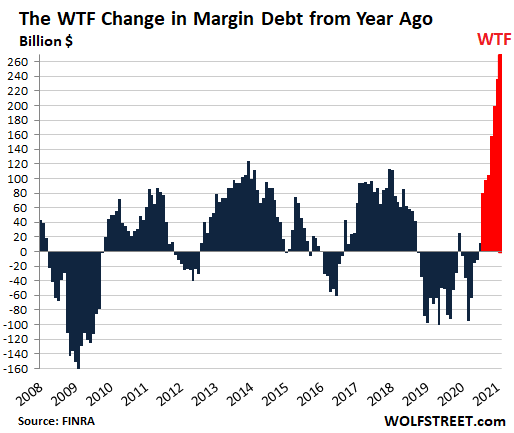 But margin debt is not cheap, especially smaller amounts. For example, Fidelity charges 8.325% on margin balances of less than $25,000 – in an environment where banks, money market accounts, and Treasury bills pay near 0%. Margin debt gets cheaper for larger balances, an encouragement to borrow more. For margin debt of $1 million or more, the interest rate at Fidelity drops to 4.0%

“Whether you need extra money for a short-term financing need or buying more securities, a margin loan may help you get the money you need,” Fidelity says on its website. In other words, take out a margin loan to buy a car or much needed bitcoin or NFTs.

And it’s risky leverage for the borrower. It seems like risk-free leverage when stocks go up, but when your stocks do the unheard-of and tank below a certain level, your broker will ask you to put more cash into your account or sell stocks into the tanking market, whereby you then join the legions of forced sellers.

In the past, a big surge in margin balances tended to precede history-making stock market declines: 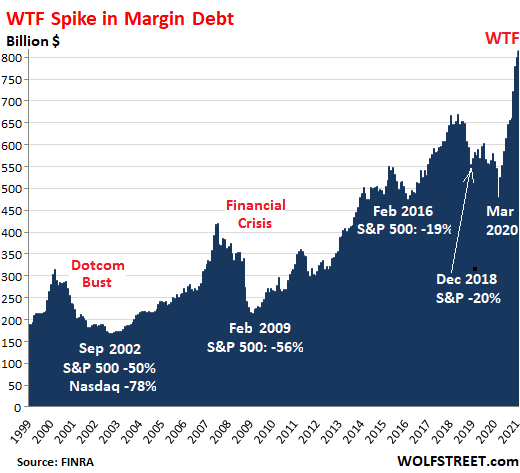 Over the two-decade period of the chart, the long-term changes in the dollar amounts are less important since the purchasing power of the dollar with regards to stocks has dropped.

Leverage is the great accelerator of stock prices, on the way up, and on the way down. Purchasing stocks with borrowed money creates buying pressure, and prices rise, and rising prices increase the margin balances a portfolio can support, and this encourages more stock-buying on margin.

Then at some magic point, margin debt has been reduced enough, and its contribution to the selling pressure fades.

The historic surge in margin balances in recent months is another indicator of how hyper-speculative and blindly courageous the mega-bubble has become. All kinds of new theories are being proffered why fundamentals and valuations are meaningless, and why prices of all assets will shoot to the moon, no matter what.

These theories smacked into the bloodletting in Treasury bonds and high-grade corporate bonds with longer maturities, as long-term yields have been marching higher for months, which I discuss in my podcast…. THE WOLF STREET REPORT: Market Manias Galore, But Long-Term Interest Rates Smell a Rat