Yves here. This reason this post matters is that financial market prognosticators are now obsessed with the idea that inflation is about to take off, due to the idea that there is lots of pent-up demand and that the stimulus accordingly will be Too Much. The economese way of saying that it that Americans have excess savings.

The countervailing evidence is considerable slack in the job market, business bankruptcies finally starting to accelerate as many concerns can’t hold on any longer, and nearly 10% of American at risk of losing their housing.

Yes, there has been an increase in food prices. That to a significant degree has been due to processing and distribution constraints thanks to Covid, such as meat packing plants being short staffed. Absent wild cards like weird weather hitting farms, some of that should abate. Similarly, some manufacturers may have dialed down their production overmuch, so what looks to them like pent up demand is more like a backlog due to them taking too capacity offline and being overly cautious in restoring it. In other words, these look like supply stories more than demand stories.

How the US economy will emerge from the COVID-19 pandemic hinges in part on what will happen to the large amount of ‘excess savings’ that US households have accumulated since last March. This column argues that, in fact, these savings are not that excessive when considered against the backdrop of the unprecedented government interventions adopted over the past year in support of households, and that they are unlikely to generate a surge in demand post-pandemic.

How will the US economy emerge from the ongoing COVID-19 pandemic? Will it struggle to return to pre-pandemic levels of employment and activity, or will it come roaring back as soon as vaccinations are widespread and Americans feel comfortable travelling and eating out? Part of the answer to these questions hinges on what will happen to the large amount of ‘excess savings’ that US households have accumulated since last March. According to most estimates, these savings are around $1.6 trillion (e.g. Blanchard 2021). Some economists have expressed the concern that, if a considerable fraction of these accumulated funds is spent as soon as the economy reopens, the ensuing rush of demand might be destabilising.1 In this column we argue that, in fact, these savings are not that excessive when considered against the backdrop of the unprecedented government interventions adopted over the past year in support of households, and that they are unlikely to generate a surge in demand post-pandemic.

Calculating ‘excess savings’ is simple: they are the cumulative amount by which personal saving during the pandemic exceeded a counterfactual path without COVID-19. As shown in blue in Figure 1, personal saving has been elevated since last March. The red line represents one plausible counterfactual scenario, in which the saving rate out of disposable income is constant at its pre-pandemic level (7.3%), while disposable personal income grows at its average rate over the previous twenty years (3.5%). ‘Excess savings’ are the area between the two lines. According to this calculation, they amount to $1.6 trillion. Different plausible assumptions on the counterfactual evolution of personal saving in the absence of the pandemic lead to relatively small differences in this headline number. 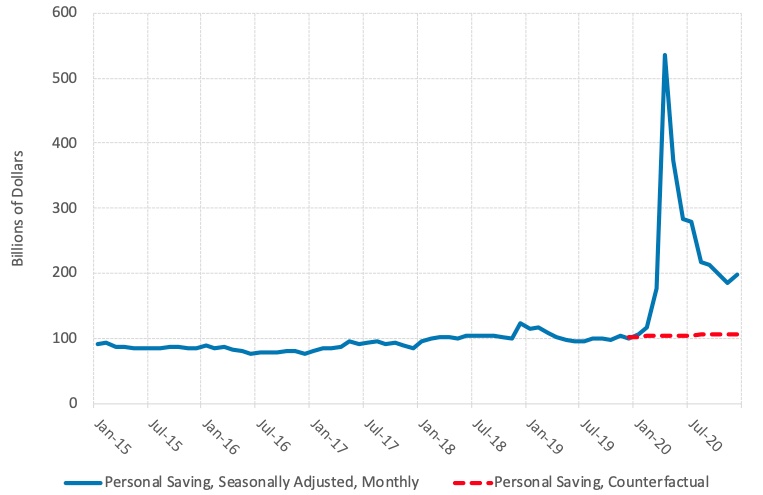 Where do these ‘excess savings’ come from? Three contributing factors are clear. First, many Americans have thankfully kept their jobs and their incomes over the past year. However, they have not spent nearly as much as they would have otherwise, because they are not dining out or going on vacation due to the pandemic. Increased purchases of furniture, electronics, and other goods have compensated only in part for this reduced spending on services. As a result, overall consumption has fallen for many households, even if their income is more or less intact. Second, starting with the emergency response approved in early March and the subsequent CARES Act, the government has stepped in to replace some of the lost income, especially for the workers in the sectors hardest hit by the pandemic. Some of this income support was spent to keep food on the table and a roof over the heads of many families, but not all of it was. Third, it is possible that households decided to save more than usual as a precautionary measure, given the great uncertainty about their jobs and the overall health of the economy going forward.

Regardless of the precise reasons, there is no doubt that households saved more in the last year than they would have in a world without the pandemic. But is there anything ‘excessive’ about the savings that they have thus accumulated? Are these moneys significantly different from the $120 trillion in net worth that US households already own, in a way that might lead them to be spent faster than other components of wealth? There are at least three reasons to think that the answer to this question is no.

Excess savings are the accounting counterpart of ‘extra’ government debt. According to national accounting, the flow of private (i.e. household + business) saving must be channelled to one of three uses: it can finance investment, be lent abroad, or to the government. Over the past year, the US government spent roughly $2 trillion to fight the COVID-19 recession, most of it financed with debt. The $1.6 trillion in ‘excess savings’ is the accounting counterpart of this increase in government borrowing.

As it is often the case with accounting, this observation has limited economic implications. It does not reveal why households accumulated the ‘excess savings’, nor whether they will spend them once the economy fully reopens. But it helps us to consider them under a different light – not as ‘extra’ resources ready to be spent, but as the flip side of the extraordinary fiscal effort to fight the COVID-19 pandemic.

Excess savings are mostly held by… savers. One reason why most economists do not associate the exceptional increase in government debt over the past year with an imminent explosion in aggregate demand – even though they might worry about it for a host of other reasons – is the idea that government debt is money that citizens owe to themselves. As such, it does not represent ‘net wealth’ that is ready to be spent. In economics jargon, this idea is known as Ricardian equivalence. According to this proposition, public transfers financed with government debt do not affect consumption because households save them to pay for the increase in taxes that will eventually be necessary to repay that debt. If Ricardian equivalence held, the marginal propensity to consume out of debt-financed transfers would be zero, and the resulting savings would never be spent.

Ricardian equivalence is the kind of theoretical benchmark that economists love, but it clearly does not hold in practice. In fact, many US families did spend a significant share of the cheques and other income support that they received during the pandemic. According to available estimates, this share is between 25% and 40% on average (Armantier et al. 2020, Baker et al. 2020, Coibion et al. 2020). The rest was used to pay down debt (also about one-third) or otherwise saved. It is hard to know exactly who holds these savings, but it seems reasonable to assume that they are individuals and families with a bit of a buffer in their budgets, whose consumption decisions are therefore less sensitive to their immediate economic circumstances. This is presumably what allowed them to save part of the support they received. According to economic theory, these savers are more likely to be Ricardian, and hence to continue holding on to these savings (Bilbiie et al. 2013). Of course, their economic circumstances might change in the future and they might find themselves needing to spend those accumulated resources, but the end of the pandemic in itself is unlikely to turn them from savers into immediate spenders. If anything, fewer households should face financial hardship as aggregate conditions improve.

Excess savings are unlikely to unleash pent-up demand for services. One caveat to the previous reasoning is that some of the ‘excess savings’ might be due to a dearth of spending opportunities in the sectors of the economy most affected by the virus, such as travel and entertainment. If this is true, some of that lost spending could materialise once those sectors fully reopen. How large is this ‘pent-up’ demand for services likely to be? On the one hand, there is little doubt that many will enjoy a few extra restaurant meals and perhaps splurge on a nicer vacation after such a long period without them. On the other hand, there is a limit to how many extra restaurant meals and vacations people will be able to enjoy. To have a sense of how much of this pent-up demand might be activated by the ‘excess savings’ accumulated during the pandemic, recall that available estimates of the propensity to consume out of the CARES Act transfers are between 25% and 40%. This means that the average household spent between 25 and 40 cents out of each dollar received in direct payments. As it turns out, these estimates are broadly in line with those based on previous transfers of this kind, such as the Economic Stimulus Payments of 2008 (e.g. Parker et al. 2013, Lewis et al. 2021). Therefore, the pandemic does not seem to have substantially limited households’ ability to spend the support that they received.

The bottom line from these three sets of considerations is that, although large by historical standards, the savings accumulated by US households during the pandemic do not appear to be ‘excessive’ when set against the extraordinary need of many American families and the unprecedented government intervention to support them. It is certainly possible that some of these savings will pay for extra travel and entertainment once the COVID-19 nightmare is behind us, but our conclusion is that the resulting boost to expenditures will be limited. This conclusion does not rule out a strong economic recovery from the virus shock. It only implies that spending out of accumulated savings won’t be one of its major drivers.