Yves here. Even though I did not agree with a lot of what the Fed did during and after the crisis (at a minimum, institutions that needed Fed assistance, like Citi, or did nasty stuff, like Citi and everyone else, should have had their boards replaced and execs in the units that did Bad Shit forced out), I did understand their reasoning. Like Wolf, I’m at a loss now.

The Fed has shut down or put on ice nearly the entire alphabet soup of bailout programs designed to prop up the markets during their tantrum a year ago, including the Special Purpose Vehicles (SPVs) that bought corporate bonds, corporate bond ETFs, commercial mortgage-backed securities, asset-backed securities, municipal bonds, etc. Its repos faded into nothing last summer. And foreign central bank dollar swaps have nearly zeroed out.

But for the week, total assets on the Fed’s weekly balance sheet through Wednesday, March 31, fell by $31 billion from the record level in the prior week, to $7.69 trillion. Over the past 13 months of this miracle money-printing show, the Fed has added $3.5 trillion in assets to its balance sheet: 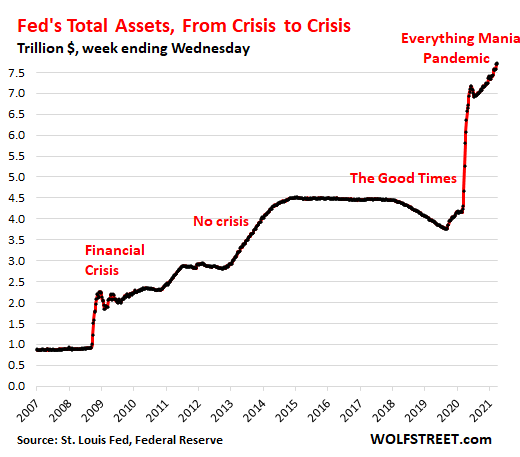 One of the purposes of QE is to force down long-term interest rates and long-term mortgage rates. But long-term Treasury yields started rising last summer. The 10-year Treasury has more than tripled since then and closed today at 1.72%. Mortgage rates started rising in early January. Bond prices fall as yields rise, and the crybabies on Wall Street want the Fed to do something about those rising long-term yields and the bloodbath they have created in the prices of long-term Treasury securities and high-grade corporate bonds.

But instead, the Fed has said in monotonous uniformity that rising long-term yields despite $120 billion of QE a month are a welcome sign of rising inflation expectations and a growing economy: 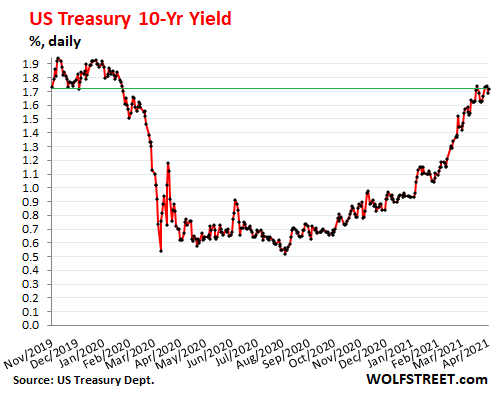 To put that $30 billion dip this week into perspective, here is the detailed view of the Fed’s total assets since early 2020: 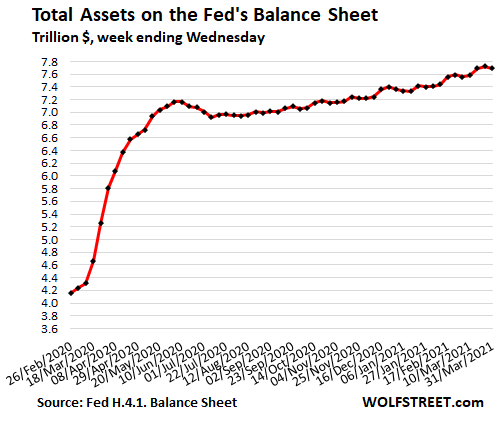 After the initial blast a year ago, the Fed has continued to add around $80 billion a month in Treasury securities to its balance sheet, bringing the 13-month total addition to $2.47 trillion, which more than doubled its Treasury holdings over the period to $4.94 trillion: 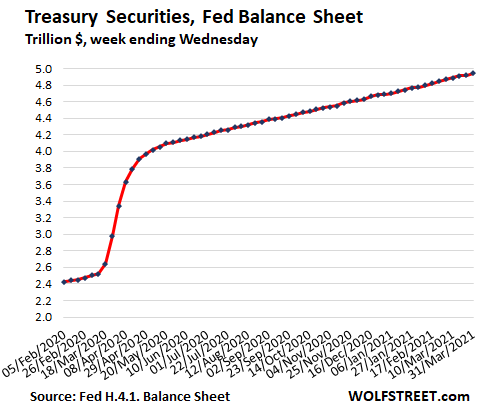 MBS Zigzag Higher, but for the Week Drop by $50 Billion to $2.18 Trillion
Holders of mortgage-backed securities receive pass-through principal payments as the underlying mortgages are paid down or are paid off. The Fed buys MBS in the “To Be Announced” (TBA) market to replace the pass-through principal payments and to increase its balance. But trades in the TBA market take months to settle, and timing differences create the zig-zags.

The pace of the increase of the balance has steepened a little this year as pass-through principal payments slowed down due to the slowdown in mortgage refis caused by rising mortgage rates. 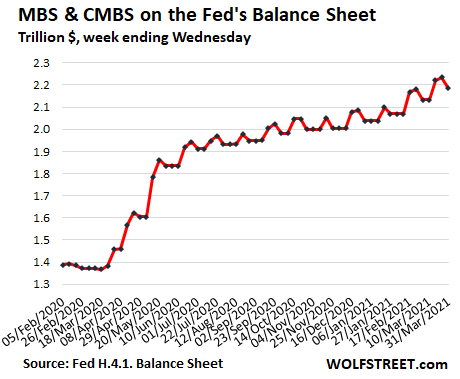 CMBS Bailout Program Is Shut Down

This $2.18 trillion of MBS include the Fed’s purchases of commercial mortgage-backed securities, a program it announced during the crisis. It was going to be a huge program, according to media hoopla. But in effect, it purchased only $10 billion of CMBS, mostly during April and May last year. This program is now shut down, and the Fed has ceased buying CMBS as of last week. Principal payments that the Fed receives will reduce the balance going forward.

The Fed continues to offer repos, but after it had raised the bid rate last June, making its repos unattractive, there have been no takers. The remaining repos matured and were unwound last summer: 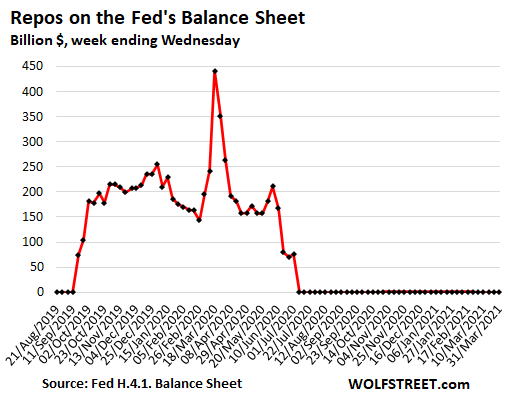 Central-Bank Liquidity-Swaps Are Phased Out

The Fed offered dollars to 14 other central banks in exchange for their currency. Nearly all these “central bank liquidity swaps” matured and were unwound. Just $2.5 billion remain, split between the ECB, the Swiss National Bank, and the Bank of Mexico – down from $450 billion during the peak: 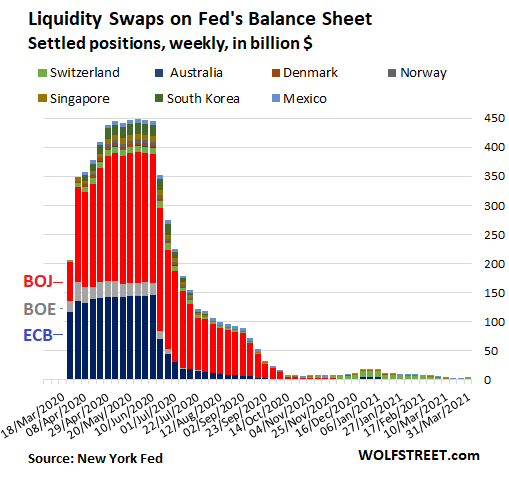 All SPVs Except PPP Facility on Ice, at $144 Billion

The Fed created these Special Purpose Vehicles (SPVs) as legal entities that can buy assets that the Fed is not allowed to buy otherwise, such as corporate bonds, junk bonds, bond ETFs including junk bond ETFs, auto-loan backed securities, municipal bonds, corporate paper, etc. The Fed lent to the SPVs, and the Treasury Department provided equity funding that would take the first loss.

These SPVs are now on ice and have expired with exception of the PPP liquidity facility (red), which the Fed extended for another three months through June. It buys PPP loans from banks and is the only SPV that is growing. All others are either frozen or declining: 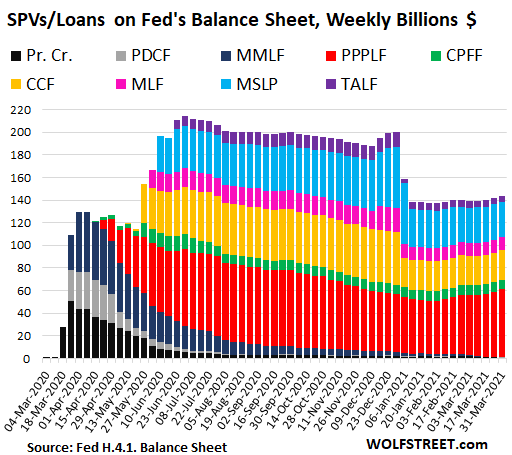