Yves here. While this paper pursues a very important question about norms, I have strong doubts about its conclusions, which is basically that there are clear tipping points and they are durable. For instance, abortion rights are far from settled in the US. The women’s liberation movement made the huge tactical error of not getting abortion rights enshrined in legislation, and instead relied on the Supreme Court to hold their win. Richard Nixon made sure that abortion rights meant less than they seemed to by refusing to fund the procedure. And despite the belief that women can get an abortion, that right is increasingly empty as MDs are not learning how to do abortions in med school, Six states have only one clinic, and in 2014, 90% of US counties had no clinic. Moreover, many conservative state make abortions a two-day process by requiring women to hear lectures about how they are killing a fetus and watching videos and then waiting 24 hours after that to have the abortion. How many low or even middling income women can afford to take two days off from work, even before allowing for possible long driving times?

And how about other areas where opposition to the status quo hasn’t led to “norm change,” like gun control and overpriced crappy health care?

Some social norms – the informal rules governing which actions should be rewarded or sanctioned in a particular society – exist for so long that they seem permanent. And yet, historical data document significant instances of sudden social change, such as widespread support for gay rights. This column presents evidence from a large-scale lab experiment designed to predict the tipping point at which such change occurs. The model suggests that effective policy interventions can raise the likelihood of reaching the tipping threshold, thereby promoting a beneficial change in social norms.

Social norms – informal rules about what actions should be rewarded or sanctioned – are ubiquitous in human societies. Some social norms have been around for so long that it is difficult to imagine life without them. And yet, these norms are sometimes replaced in favour of new rules that better reflect the preferences of the members of a society. Two prominent examples involve the abandonment of norms against homosexuality, and norms supporting gender discrimination in the workplace. As can be seen in Figure 1, social change can sometimes be rapid and nearly impossible to anticipate.

Figure 1 This is how fast the US changes its mind

For norm change to occur, there needs to be a social wave of individuals that moves against the status quo; for instance, against the ban on same-sex marriage and for the normalisation of being gay. If the group that mobilizes is large and visible, the social cost for embracing a new behaviour decreases and eventually reverses. A social tipping point occurs (e.g. Schelling 1978, Bicchieri 2016, Centola et al. 2018). An illustration of such a process is the rapidly increasing number of people in 2013 who signalled their support for same-sex marriage using red equal signs, and later rainbow flags, on their social-media profiles.

Figure 2 As the US Supreme Court took up arguments in key marriage rights cases in 2013, the red equal sign released by the Human Rights Campaign replaced more than 15 million profile pictures on social media platforms in support of same-sex marriage 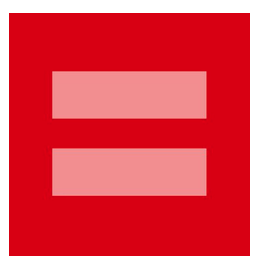 Historical data clearly documents instances of sudden social change (e.g. Kuran 1991, Jones 2009, Amato et al. 2018). These data, however, do not permit us to identify models that can predict social tipping. This is problematic, as it is difficult to know if social norms accurately reflect societal attitudes at any given point in time, or whether there is a hysteresis which could call for an intervention to stimulate change. Recently, researchers started using experiments in controlled laboratories to study the process of social change (e.g., Centola et al. 2017, Smerdon et al. 2019, Bicchieri et al. 2020). In a new study (Andreon, Nikiforakis and Siegenthaler 2021), we present evidence from a large-scale lab experiment designed to test and empirically validate a widely used theoretical class of model for social tipping: threshold models.

Threshold models assume that an individual’s willingness to deviate from a social norm depends on the proportion of others in the society that previously deviated from it. A society reaches a ‘tipping threshold’ when the proportion of people deviating from the norm becomes large enough that even individuals who are risk averse, conformist, or have pessimistic expectations about the prospects of change have an incentive to follow suit (e.g. Granovetter 1978, Schelling 1978, Efferson et al. 2020).

Intuitively, the size of the tipping threshold measures the entrenchment of an established norm. The higher the threshold, the more difficult it becomes for a society to abandon a norm. This relation, however, had not been tested, nor is there evidence to identify at what threshold a social norm can persist even at the detriment of most of a society’s members.

Using numerical simulations, we show that in such a model there is a critical tipping threshold of 35% of the population, for plausible distributions of risk/conformity preferences and expectations. That is, when the benefits and costs of norm change are such that the tipping threshold falls below the critical threshold of 35%, then the probability of norm abandonment is predicted to be close to 100%, because enough individuals are willing to persist in leading change. In environments where incentives are such that the tipping threshold exceeds 35%, however, the probability of social tipping quickly drops to 0%, because the critical mass for triggering change is unlikely to accrue.

In Andreoni et al. (2021), we use a threshold model to predict social tipping in 54 experimental societies, each consisting of 20 individuals, and test different policy interventions that could promote norm change. The individuals interact over multiple periods in a social-tipping game with the following incentives:

That is, in the first round everyone prefers alternative A (equilibrium A), but preferences change over time until after a certain point, when nearly all members of a society would prefer change to alternative B (equilibrium B). The process by which preferences change is public knowledge, thus ruling out incorrect beliefs about others’ preferences as a reason for detrimental norm persistence (e.g. Granovetter 1978, Smerdon et al. 2019). Despite this, reaching a tipping point can be difficult given the pressure to conform and the history of adherence to the old norm, which affects individual expectations.

The data from the experiment demonstrates that societies can easily get caught in conformity traps. In particular, the baseline condition TT-43 implements a tipping threshold of 43% for which the model predicts no social tipping. The first panel in Figure 3 depicts behaviour for this condition in the six societies that participated in TT-43. The increasing solid line shows that the proportion of individuals who would prefer to abandon the old norm increased over time (the dashed curve shows the expected proportion). However, the green line with circled markers shows that the proportion of individuals who choose to abandon the norm never exceeded 20%. Hence, societies never reached the tipping threshold (given by the horizontal line at 43%), and norm abandonment did not occur. 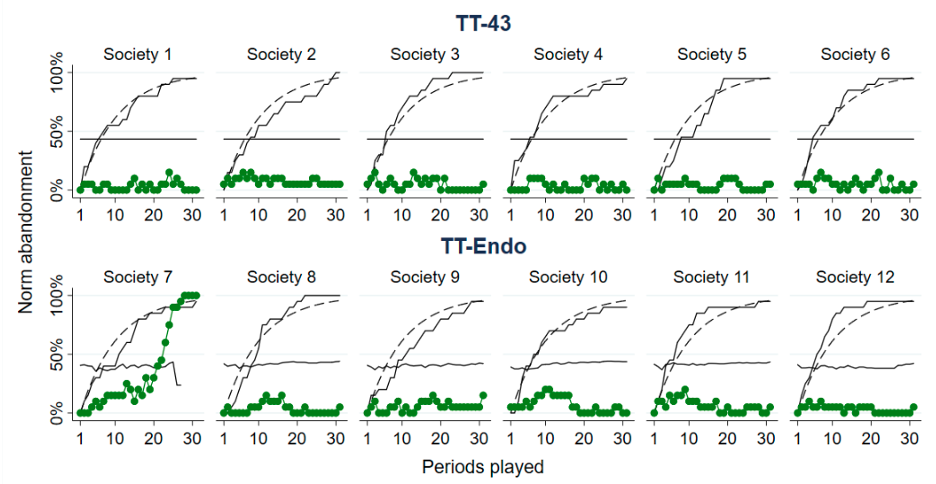 Notes: Norm abandonment is shown as the line with circled markers. The dashed concave curve indicates the theoretically expected fraction of subjects preferring to abandon the norm; the solid increasing line the corresponding realised fraction.

The second panel in Figure 3 shows behaviour in condition TT-Endo, which is identical to TT-43except that subjects could set the tipping threshold themselves by choosing how much others are penalised when failing to conform to the norm. In this condition, we did not impose strong incentives for coordination. Choosing a low penalty would correspond to a high tolerance for norm digressions. Strikingly, subjects set the tipping threshold too high for tipping to occur and five out of six societies failed to achieve a norm change. The reason is threefold:

How to Escape the Conformity Trap

We also explored the efficacy of interventions that could affect expectations about change. In condition ‘public awareness’, we highlighted that all members of a society would prefer change by providing precise information about the predominant preferences in any given period. In ‘poll’, individuals could express their preferred social alternative via a poll that took place when a clear majority preferred abandoning the old norm. The lower two panels in Figure 4 show that, despite a high tipping threshold of 43%, these interventions led to change in ten out of twelve societies. Social tipping can therefore critically depend on a common understanding of and perspective on the benefits from change. For example, choosing marriage equality as the angle for gay rights helped to create more sympathy for gay people, and generated enough momentum in a sufficiently broad demographic to bring about the normalisation of being gay. 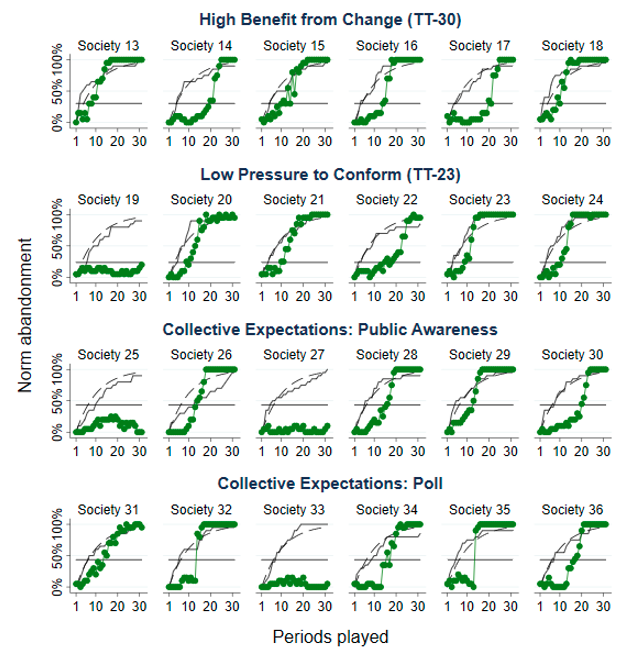 Our research shows that when social change requires mass coordination, there can be a disjunction between what society really wants (e.g. granting marriage equality) and the outcome (e.g. great social costs for supporting gay rights). The change in social and institutional arrangements will not occur if only relatively few people mobilize. This may happen if people worry about the social costs due to their mobilization – which we show can be high even if a large majority would be in favour of change – or believe that the protests are unlikely to garner broad support.

Social learning is often not enough to promote change. Choices can mask true preferences. Indeed, in one condition, we show that increasing the speed of social feedback (e.g. through new technologies) can prevent rather than promote change.

Two factors consistently helped hasten beneficial change in our study. The first is a common understanding of the benefits from change, which can result from events that attract public attention, opinion polls that aggregate information, or by finding an angle on an issue that appeals to a broad demographic (e.g. marriage equality has proven to be fertile ground for the acceptance of gay rights). The second factor is perseverance. Social tipping in our setting critically depended on a group of leaders who persisted in moving against the established equilibrium, even at great personal cost.