Yves here. This post “unambiguously” demonstrates that lax monetary policy, also known as ZIRP or negative real interest rates, boosts inequality by increasing the total share of income going to top cohorts. While we’ve seen plenty of corroborating data, like how much richer our billionaire lords and masters have become under Covid, it’s important to see this finding proven out in Denmark, when European stock markets haven’t been as bubbly as ours.

Who gains – and by how much ­– when central banks soften their monetary policy regime is a key policy question. This column discusses new evidence on the distributional effects of monetary policy based on detailed administrative household-level data. The authors show that the gains from lower policy rates exhibit a steep income gradient, with the increases in income, wealth, and consumption modest at the bottom of the income distribution and highest at the top.

Monetary policy is an important tool for stabilising the economy. This was especially evident during and after the 2008-2009 global crisis (Cui and Sterk 2018), with some market commentators even arguing that monetary policy has become ‘the only game in town’ (El-Erian 2016). In the context of the current Covid-19 crisis, central banks have again played an important role (e.g. European Parliament 2021).

While monetary policy is generally designed to affect economic aggregates, the distribution of gains and losses matters for several reasons. First, it shapes the effect on aggregate demand because households differ systematically with respect to the marginal propensity to consume (Kaplan et al. 2018). Second, the revived interest in income inequality (Milanovic 2016) and wealth inequality (Saez and Zucman 2014) have sparked an important debate about how monetary policy affects these phenomena. This question has also attracted significant attention from policymakers, with some arguing that softer monetary policy reduces inequality because it primarily helps lower-skilled workers find jobs (Draghi 2016). But others have emphasised that the well-to-do also benefit through increasing asset prices, meaning the net effect on inequality is ambiguous (Bernanke 2015).

In a recent study, we analyse the distributional effects of monetary policy on income, wealth and consumption (Andersen et al. 2020). Our main data source is individual-level tax records for the entire population of Denmark, with detailed information about income and balance sheets for the period 1987-2014. This equates to more than 70 million individual-year observations. In the tax records, we observe all major components of households’ disposable income (e.g. salaries, dividends, and interest expenses) as well as the main balance sheet components (e.g. housing, stocks and debt). We combine the tax records with other administrative data sources, most importantly an auto register with information on car purchases – an important component of durable consumption.

The goal of the study is to estimate how a decrease in the policy rate affects households at each position of the income distribution. A key empirical challenge is that the Danish policy rate may be endogenous to local economic conditions. We address this challenge by exploiting the long-standing commitment of the Danish monetary authorities to exchange rate stability (which implies that Denmark has effectively imported its monetary policy stance from Frankfurt for 35 years). When the ECB changes its leading interest rate, the Danish Central bank typically changes its rate on the same day to restore the interest rate differential that is consistent with a fixed exchange rate. This introduces a source of exogenous variation in the Danish policy rate that we exploit for identification. Concretely, we use changes in the ECB policy rate as an instrument for changes in the Danish policy rate, while controlling exhaustively for the macroeconomic environment, for cross-border spillovers, and for secular trends in inequality. 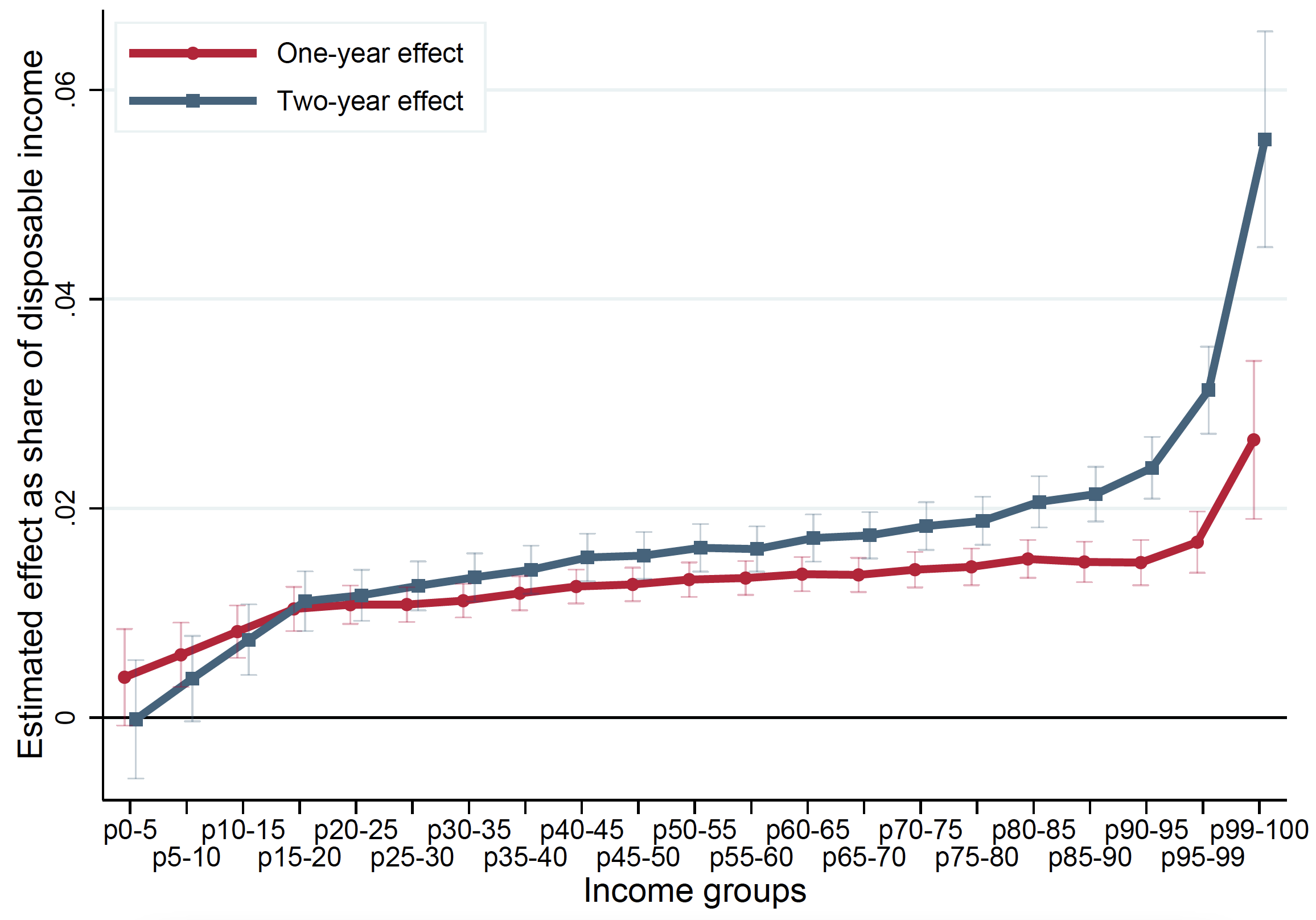 We identify the key economic channels underlying this result by considering each component of disposable income separately. Consistent with theory and the perception of policymakers (e.g. Draghi 2016), softer monetary policy has the largest effect on salary income at relatively low income levels, reflecting a sizeable increase in employment for this group. But most other components of disposable income (e.g. gains in the form of higher business income, higher stock market income, and lower interest expenses) contribute to a positive income gradient. 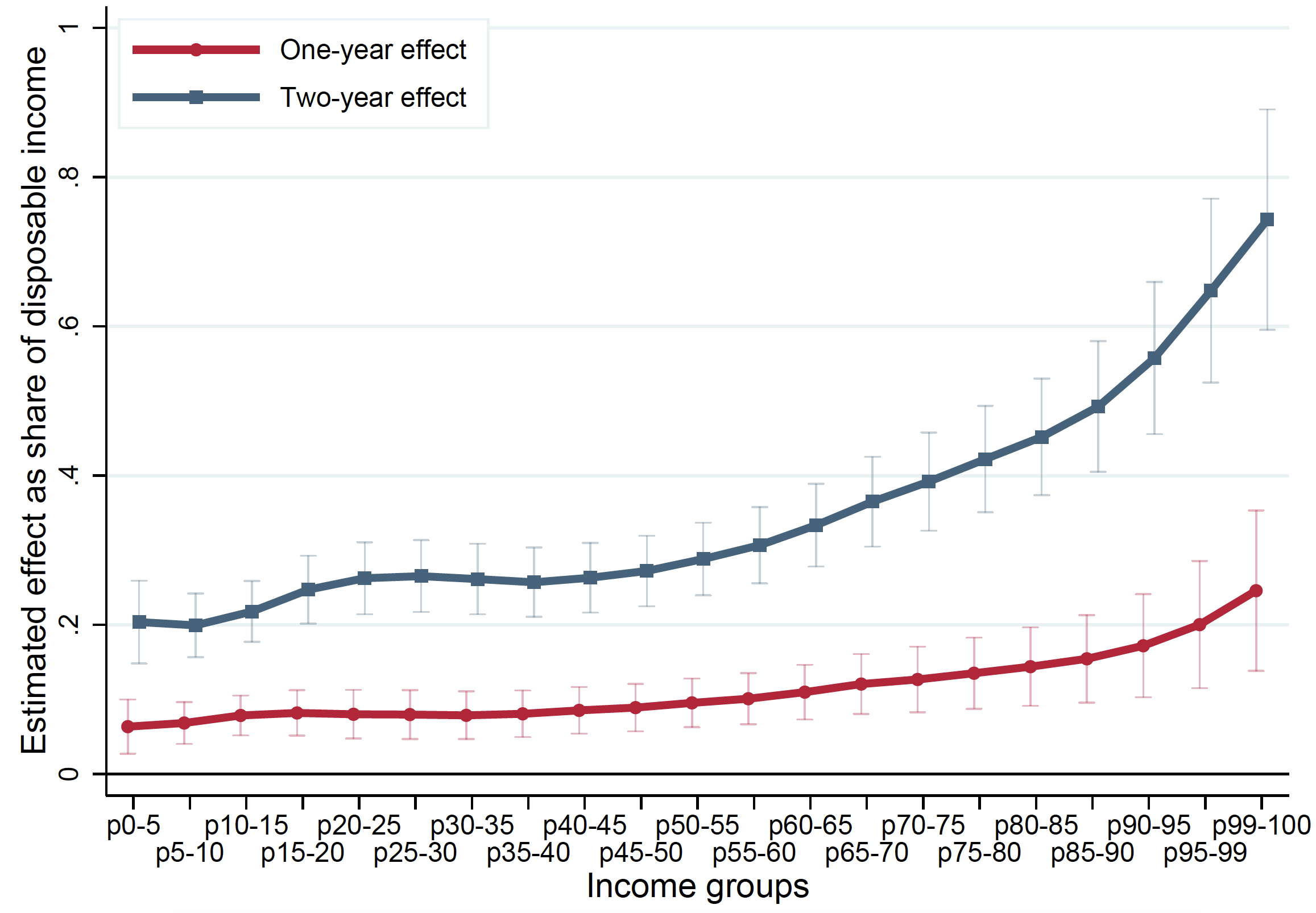 Theoretically, debt matters directly for exposure to several channels of monetary policy and may further shape consumption responses to the extent that it represents a financial constraint. We show empirically that household debt plays an important role in the transmission of monetary policy. Within income groups, we show that the estimated effects of monetary policy tend to increase monotonically with ex ante leverage. Within groups with similar leverage, the income gradient is generally weaker than in the full sample. Nevertheless, significant heterogeneity remains even after accounting for leverage. Notably, the top-1% stands out with larger gains from softer monetary policy than any other income group at each level of leverage.

Finally, to relate our findings to the broader body of existing research on inequality (e.g. Piketty 2014), we undertake a simulation exercise that summarises the distributional implications of our estimates. The results suggest that softer monetary policy unambiguously increases income inequality by raising the income shares at the top of the income distribution and lowering them at the bottom. As shown in Figure 3, accounting for direct as well as indirect channels, reducing the policy rate by one percentage point raises the share of aggregate disposable income for the top-1% by around 3.5% over a two-year horizon and lowers it by almost 2% for the bottom income group. 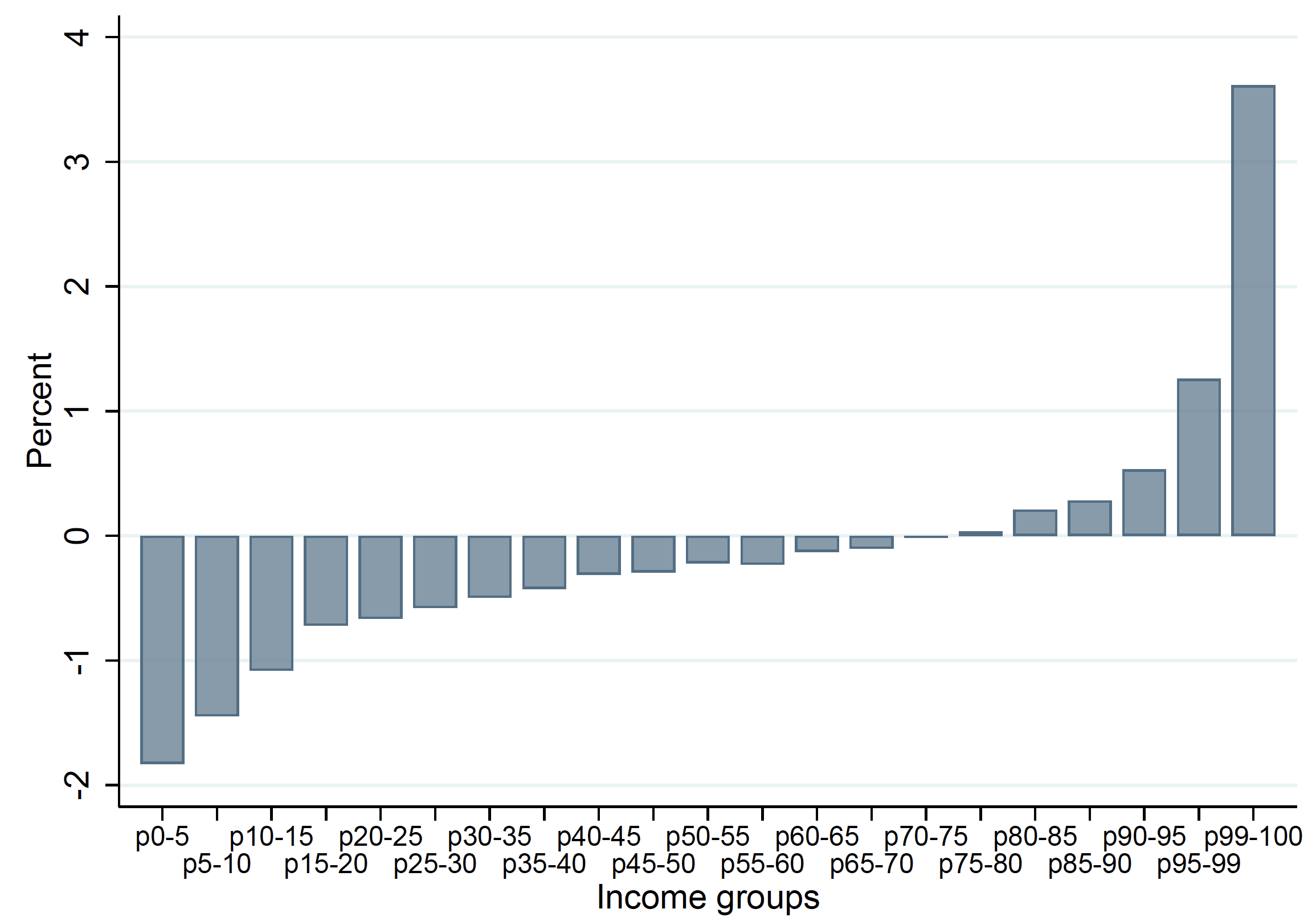