While the effectiveness of central bank’s verbal communication is well documented, little is known about the effectiveness of communication via non-verbal channels. This column discusses vocal features of Federal Open Market Committee communication and examines the impacts on financial markets. The results suggest that tone of voice can contain distinct information not captured in the texts of press conferences. A positive voice tone can lead to higher share prices and decreases in volatility, highlighting the importance of voice control for central bank communication.

In a famous analysis, Mehrabian (1971) posited a 7-55-38 rule of communication: words convey 7% of a message, body language (gestures, facial expressions, etc.) accounts for 55%, and tone delivers 38%. While the debate on exact percentages for each channel is far from settled, it is clear that effective communication has to rely on more than just the text. Central banks have been increasingly relying on communication-based tools (e.g. forward guidance) to manage the public’s expectations, but do central bankers utilise communication to its full potential?

It has been widely documented that the content and text sentiment of statements, minutes, and transcripts can move financial markets (e.g. Hansen and McMahon 2016, Hansen et al. 2018). However, little is known about the effects of central bankers’ non-verbal communication. In a recent study (Gorodnichenko et al. 2021), we develop a novel deep learning model to quantify tone (vocal emotions) embedded in the answers given by Federal Reserve (Fed) chairs during Federal Open Market Committee (FOMC) press conferences over the period 2011 to June 2019. In other words, we move beyond text analysis and study how policy messages are voiced. We then examine whether emotions in voice tone can move financial markets.

Building on recent research on voice recognition and speech emotion, we develop a neural network algorithm to classify the emotions embedded in the answers during FOMC press conferences. Specifically, we split a given press conference into audio segments corresponding to each question raised during the event and the response of the speaker. The split audios are then run through a machine learning procedure which is trained to recognise emotions from voice variations. Each answer is rated in terms of three emotions: positive (happy or pleasantly surprised emotions), negative (sad or angry emotions), and neutral. For a given press conference, the aggregate voice tone is then measured as the ratio of the difference between the positive answers and the negative answers to the total number of positive and negative answers.

We also employ a dictionary-based approach similar to Neuhierl and Weber (2019) to classify the text of statements and press conference transcripts into hawkish versus dovish sentiment. The sentiment of texts during the terms of Bernanke and Yellen appeared to be more dovish than Powell’s, which likely reflects that policy rate increases dominated during Powell’s period in our sample. The within-speaker variation in the text sentiment is broadly similar across the Fed chairs. Additionally, the variation in text sentiment during Q&A sessions is larger than the variation in the text sentiment for statements and remarks, which is likely a result of the less scripted nature of Q&A sessions relative to other communication types.

Although one might think that text and voice should be highly congruent, we find that the relationship between these two channels of communication is more nuanced. Specifically, the positive messages conveyed in the voice tone are associated with more dovish texts, but this relationship is fairly weak. In fact, it is not uncommon to observe dovish texts and negative tonality. Similarly, there is only a weak correlation between the variation in tone and actual policy shocks identified as in Swanson (2020): a shock to the policy rate (FFR shock), a forward guidance (FG) shock, or an asset purchase (AP) shock. However, there is a stronger correlation between voice tone and the stage of the policy cycle measured by the shadow rate (Wu and Xia 2016). In short, the tone of Q&A responses may generate variation in policy communication that is unrelated to the Fed’s actions and verbal communication. 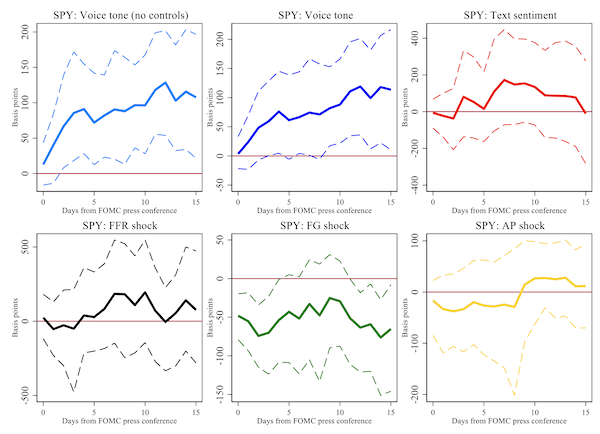 Further examination suggests that a positive voice tone tends to decrease current and anticipated volatility (Figure 2), which is consistent with the notion that central banks can shape uncertainty about future economic conditions (Hansen et al. 2019). A more positive tone also leads to a reduction in investors’ expectation about interest rate risk. 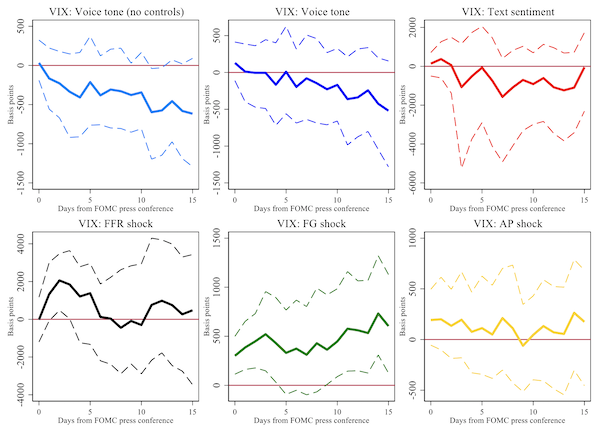 In contrast to the strong responses of the stock market, bond market tends to take few vocal cues from the Fed chairs (Figure 3). This finding is consistent with Cieslak and Pang (2020) or Ehrmann and Talmi (2020), who document that bond market reaction to Fed communications is weak. By examining the response of the spread between nominal and inflation-indexed government bonds, we find that a more positive voice tone leads to lower expected inflation after five to ten days. One may conjecture that positive tone plays a signalling role: a happy tone of the Fed chair indicates satisfaction with future inflation dynamics. Why Does Voice Tone Matter?

Overall, our findings show that just as the actions of the Fed move financial markets so too does the vocal aspect of FOMC press conferences. One potential explanation is that due to asymmetric information between the public and the central bank, market participants tend to look for more information through the aspects which are not explicitly ‘scripted’ such as the voice tone or body language of the Fed chair. These non-verbal elements of communication can signal the Fed’s perspective on current/future economic outlook and/or the course of future monetary policy. In fact, it is not uncommon that investors and media watch/listen to the FOMC press conference, analyse the chair’s voice, and attempt to interpret what it (i.e. the voice tone/emotion) means. In other words, the press and financial market investors appear to pay attention to the non-verbal communication.

Although future work should dig deeper into understanding nuances of using voice to communicate policy, our results clearly have important policy implications. How messages are said appears to be potentially as important as what is in the messages. This does not make the job of central bankers easier and possibly adds another qualification (voice control) to the job requirement. However, this could be a prerequisite for anybody interested in using a public arena for policy communication. Indeed, to paraphrase Ronald Reagan, how can a Fed chair not be an actor?