Yves here. One, or in this case, even two robins do not make a spring. But they are indicators. We had warned that the “work at home” trend was not likely to be as durable as many who’d bought homes well away from their former offices would like to think. As we indicated, most CEOs felt that there was a significant productivity loss in having their staffs dispersed. Whatever gains there might be from fewer distractions were offset by many types of collaboration being more difficult, particularly meetings of more than a very few people, as well as the loss of serendipitous casual information-sharing. And what looks like gossip often has an upside, in that learning about personalities and potential or actual scandals helps workers navigate internal bureaucracies.

Admittedly, financial service firms, due to their high volume of transactions, generally benefit from close collaboration, so it makes sense that big banks would be early to bring workers back to the office (assuming Covid stays at current perceived-to-be-tolerable levels).

However, another factor that I believe many former office denizens are underestimating is the face times arms race. Unless an employee is in a role where there really is not much managerial need for regular interaction with the higher ups (like a programmer or a book editor), or a sales role where the rep has strong client relationships and can lay credit to revenue generation, once companies start having employees back a few days in the office, the pressure to put in more face time for competitive reasons will rise. There’s a substantial body of evidence that supports that idea that managers that the higher-ups see more of are more likely to get promotions and plum assignments. Zoom relationships are more shallow than the in-person kind.

JP Morgan CEO Jamie Dimon, in his typical uncensored manner, scotched the notion that his company is a democracy:

“October, it will look just like it did before,” he said. “And everyone is going to be happy with it. You know people don’t like commuting, but so what.”

He added, “I’m about to cancel all my Zoom meetings. I’m done with it.”

And even though I actually didn’t much like working in the Wall Street area, seeing the iconic Fraunces Tavern is nostalgic.

By Greg David. Originally published at THE CITY on May 5, 2021

Two of the city’s most important financial institutions have told their workers to plan to be back in the office soon — raising hopes of the biggest landlords and smallest businesses that New York’s economic recovery will finally pick up speed.

Following Gov. Andrew Cuomo’s surprise announcement Monday that he will lift most restrictions on businesses later this month, Goldman Sachs on Tuesday told employees that it expects them back at its Battery Park headquarters by mid-June. That tosses a potential lifeline to downtown businesses that have seen their cash flow wither since March 2020.

Few are as relieved as Kelley Mondesiré, an acupuncturist, whose business imploded from 90 patients a week to zero during the shutdown to as few as five.

“Goldman’s decision is great because not only it will help me build up my clientele but all the small businesses,” she said. “We need people to come back into the area with some life and some money.”

At the same time, J.P. Morgan Chase CEO Jamie Dimon, who in an April letter to shareholders speculated that the firm would need less space in the future because of remote work, seemed to change his mind: He told a Wall Street Journal conference Tuesday he expects his workforce to come flooding back to the office in September.

“October, it will look just like it did before,” he said. “And everyone is going to be happy with it. You know people don’t like commuting, but so what.”

He added, “I’m about to cancel all my Zoom meetings. I’m done with it.”

The big bank decisions are also a boost to Mayor Bill de Blasio, who recently ordered 80,000 city workers back to their offices — and who seemed to prompt the governor’s move by unexpectedly declaring last week that New York City would be completely open by July 1.

The mayor also based his latest budget plan on a sharp pickup in employment, projecting the city would regain 400,000 jobs in the last nine months of the year, resulting in a total increase of 500,000 positions for 2021.

His optimism is in sharp contrast with that of the Independent Budget Office, which in February estimated gain for the year at 152,000 jobs.

“This is exactly what the mayor has been saying: By bringing our workforce back safely and responsibly, and by vaccinating millions of New Yorkers, the city is sending a signal that the comeback is well underway,” said Mitch Schwartz, a de Blasio spokesperson. “It’s great to see the private sector embrace that vision and we’re confident more and more businesses will do the same.”

The governor’s moves to fully open the economy continued Wednesday when he announced that the Mets and Yankees can go to 100% occupancy in stadium sections filled with vaccinated fans, and that Broadway would return on Sept. 14, also at 100% capacity.

Goldman has long been the preeminent firm among traditional Wall Street businesses of investment banking and underwriting. J.P. Morgan is the largest bank in the United States by far with almost $1 trillion in assets more than its closest rival, and is a key player in most Wall Street businesses.

Their announcements trumpet that the biggest and most prestigious firms don’t think that hybrid work with employees in the office only two days a week won’t work. The decisions seem likely to influence other companies.

The Goldman headquarters housed some 7,000 workers before the pandemic, a few of whom have already begun returning to the office. CEO David Solomon, in an email to Goldman employees Tuesday, explained why he wanted everyone back, using a theme likely to be the focus of the pro-office executives in the weeks to come.

“We know from experience that our culture of collaboration, innovation and apprenticeship thrives when our people come together, and we look forward to having more of our colleagues back in the office so that they can experience that once again on a regular basis,” he said.

‘Wind at Our Back’

The city’s biggest landlords immediately seized on the announcement and its rationale.

“The message that Jamie Dimon and David Solomon are sending strongly to the rest of the world is that the city has to come back to work,” said Bill Rudin, co-chairman of Rudin Management Co, which owns 16 offices buildings in the city. “ And we [landlords] are ready.”

Rudin is trying to lease almost 2 million square feet office space at three buildings it has recently redeveloped at 3 Times Square, 90 Pine Street downtown and Dock 72 in Brooklyn. He said business has picked up in recent months, with three-quarters of available space drawing interest.

“We have the wind at our back,” he said hopefully.

Eddie Travers, owner of the Financial District’s well-known Fraunces Tavern and another restaurant in the area, could certainly use an increase in foot traffic.

Last week marked the first time since last March that he saw people in suits come into the restaurant after work on Thursday, which was once the go-to night for colleagues to meet at a bar. 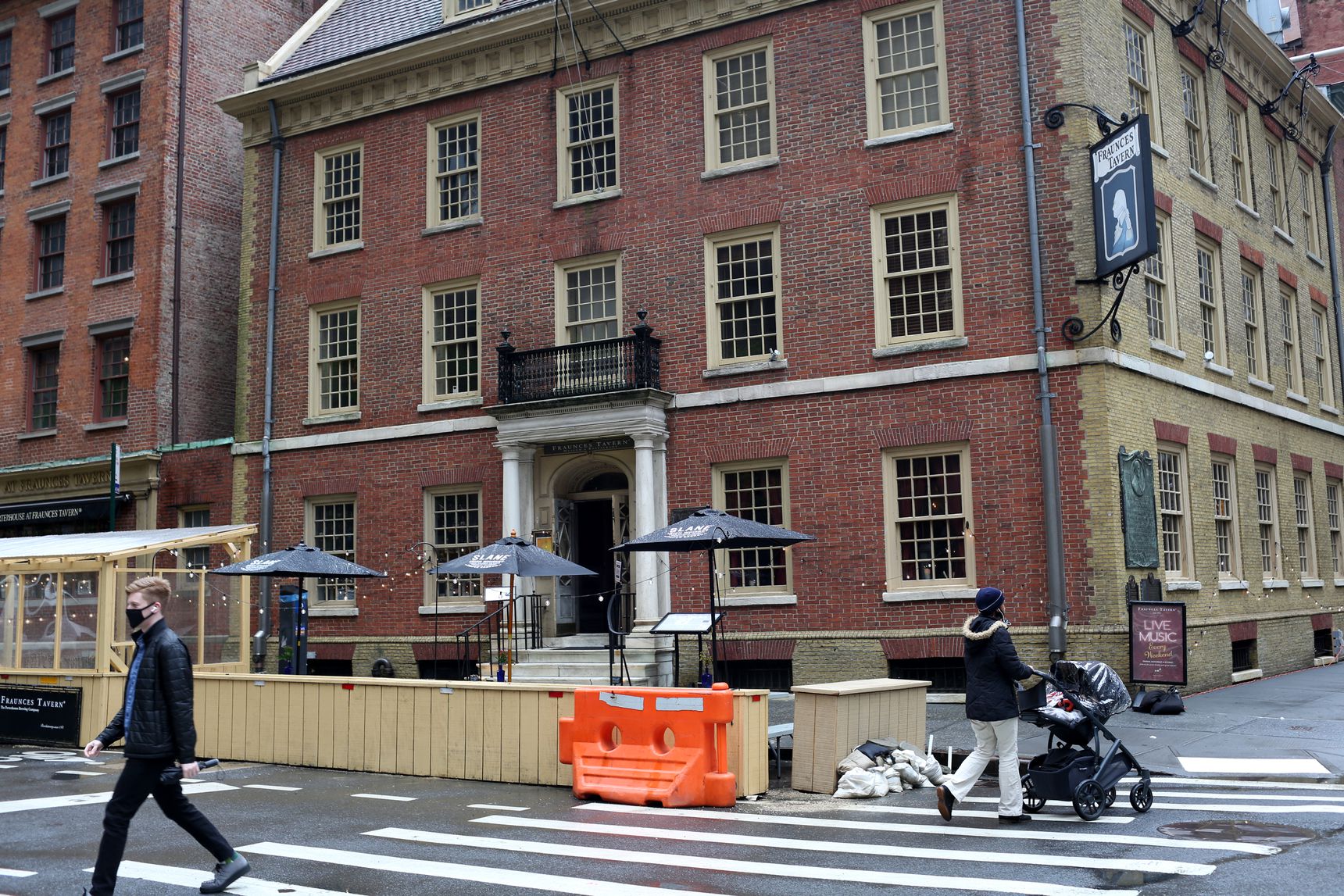 Fraunces Tavern on Pearl Street in the Financial District. May 5, 2021. Yana Paskova/THE CITY

But increasing bar capacity to 75% next week won’t help him because he doesn’t have customers to fill the space during the week with offices still mostly empty.

He and his wife work seven days a week now, and their staff is half the 100 people he employed before the pandemic shutdown.

But Travers said the return of Goldman could be the start of a revival.

“In the past, we have had a lot of their staff hanging out,” he said. “It will be a big help.”

A Boost in the Bronx

The same is true for Mondesiré, the acupuncturist, who is a preferred provider to Goldman and gets referrals when its workers are in need of traditional Chinese medicine.

Her business also has depended on the financial service employees at Barclays and Deutsche Bank for all 13 years it has been downtown.

Also hoping for a return to the office is Liz Neumark, owner of the catering company Great Performances, which just opened a new headquarters and kitchen in the South Bronx that she built out at a cost of $7 million during the pandemic shutdown.

She qualified for tax benefits under the city’s REAP program for firms moving to the other boroughs from Manhattan and she received a $1 million Empire State Development grant while committing to increasing her workforce to 181 people in the coming years.

Prospects for this year are better because she has booked more than twice as many weddings as usual. And corporate inquiries have begun to pick up as well.

During the pandemic she survived by producing some 2.5 million meals for the city under its various programs to feed New Yorkers.