Yves here. While I appreciate Tom Neuburger’s critique, I don’t think it goes far enough. On my list of climate bullshitters are Green New Deal promoters. They are selling a vision of not merely a pain free transition to a much lower carbon-used economy, but one with unicorns and rainbows in terms of economic groaf and jobs, via building new infrastructure….which has to be done with the current carbon-using infrastructure and limited and sometimes environmentally nasty inputs, like rare earths and lithium. The only hope we have of non-catastrophic outcomes is radical conservation, and just about no one in a position of influence is willing to say that. After all, we live in a society where some regard mask-wearing as an unbearable hardship.

“How to spot carbon greenwash? A good rule of thumb is whether the proposal actually cuts emissions, by a significant amount, and soon.”
—Damian Carrington

As Damian Carrington points out in a recent Guardian piece, we live in a time when the “impacts of the climate emergency are now so obvious, only the truly deluded still deny them.”

And he’s right. Almost no one today — at least among the civilian population, those not engaged in politics professionally — really doubts that climate change is happening.

Yet we still all go about our merry social way as though the problem will fix itself (it won’t); or the next generation will deal with any real crisis (they won’t get the chance, since it will hit this generation first); or the election of Joe Biden means the nation is back on track for curbing emissions (it isn’t, not with anything close to the speed required).

And that’s the problem: the speed required. 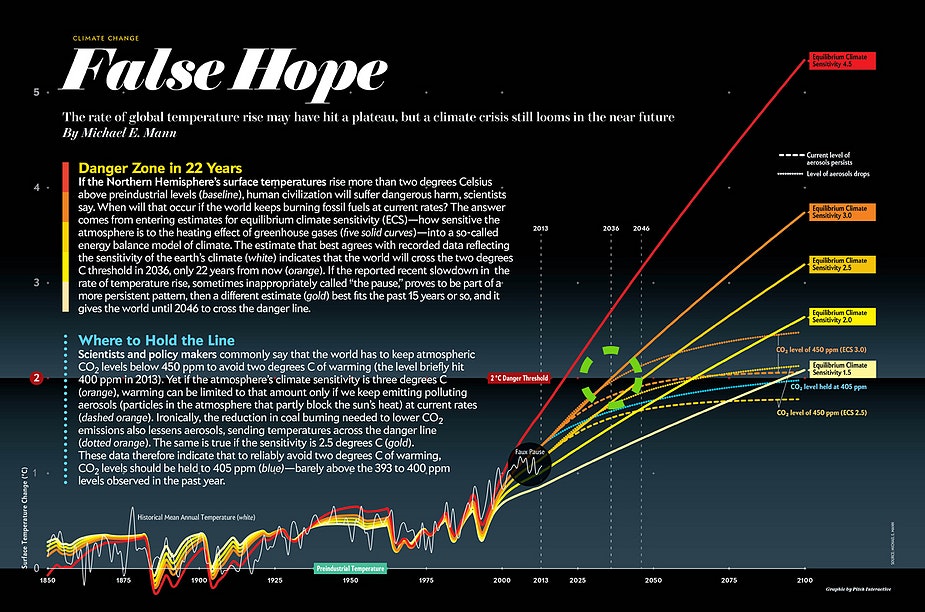 If a giant meteor were barreling toward the earth and the best scientific minds said it would hit for sure, ending almost all life on the planet, would we start working now to end the threat, even if it were predicted for decades in the future? Or would most of us go back to television and our (economically miserable) lives and say, “Cool. Tell me again when it matters”?

Frankly, and I say this with all the love I can muster for our easily deluded species, if the meteor were predicted to hit in, say, 2060 — for all practical purposes, hit the next generation — I’d bet on the delay; I’d bet that next year’s Super Bowl mattered more.

But what if the meteor were predicted to hit this generation, hit less than 15 years from now? Then I’d bet actual serious work would start immediately, and everyone would be engaged.

Our Rulers and Their Wants

But the climate crisis is not a meteor. Altering a meteor’s deadly course through space is not an existential threat to our ruling class and its self-dealing, self-enriching economic system. Only its impact poses such a threat.

The climate crisis, however, threatens to end our economic system not only if it’s ignored. It threatens to end our system if it’s addressed. And no one, not Joe Biden, not any ruler of any major nation in the world, not banks, corporations, fossil fuel companies, hedge funds, or the whole of the investor class, wants that.

And yet each of these entities — governments, corporations, the finance system, the whole of the investor class — will be SOL the day that death ship reaches the harbor of a panicked and pants-soiled public’s active awareness.

The day the public truly figures out the mess we’re in is the day the world changes forever, never to go back. And on that day, everyone on the planet, rich and poor alike, will ask a single question: Where can I go that’s safe?

The answer for most will be: Nowhere; nowhere at all. And yet that day is further out than the day when we must force capitalism to be transformed so we can solve the problem it cannot. That day, the day of needed transformation, if we truly take the crisis seriously, is today. Thus the bullshit, all to serve delay, all to keep our capitalist rulers rich and in their chairs.

It’s really that simple. By praising profit-first, or empowering those who worship that gold calf, we doom ourselves to die before our time — among the young, only the lucky will see natural deaths.

It’s in this light, as Carrington suggests, that we must judge climate policies and those who propose them. We’re past the day of mainstream denialism. We’re almost past the day when the climate isn’t mentioned at all in official circles; soon you hear about it regularly even on CNN and MSNBC.

Which means we’ve reached the day when climate pretenders — in Carrington’s words, climate bullshitters — start to take the center stage, all to keep the current deadly system alive and well, up to the furthest minute it can be sustained.

So far that’s all we’ve seen since Biden was elected, this climate bullshit, an endless flow of “here’s how much we care,” followed by an endless refusal to act in ways that matter.

In Biden’s case, that means refusing support for any deed that threatens fossil fuel profit, such as shutting down drilling on federal lands forever, or cutting off for good all subsidies to oil and gas operations and their investors.

Here’s Carrington on how the rest of our ruling class is offering to save us. Let’s start with governments:

Let’s start at the top, with the world’s governments, which have been setting out more targets than an archery competition. The global leader is the UK, which recently pledged a world-beating emissions cut of 78% by 2035. Targets are a necessary first step, but need action to be met and the instant, universal response: “Show me the policies!”

The problem is some actual UK policies are pushing emissions up, not down: massive road building, a scrapped home energy efficiency programme and slashed electric car incentives, new oil and gas exploration, a failure to halt airport expansions and block a new coalmine (instead, the government belatedly ordered a public inquiry).

But it is not just Boris Johnson’s government that says one thing while doing another. All are talking tough on climate, but China is building one large coal-fired power station a week, Japan remains one of the biggest financiers of overseas coal plants and Norway is developing giant new oil and gas fields.

Canada’s premier Justin Trudeau says climate change is an “existential threat”, yet the country’s emissions have actually increased since the 2015 Paris deal, thanks to its tar sands exploitation. Oh, and many nations still subsidise fossil fuels, which is like buying more cigarettes when you’re trying to quit smoking.

The world’s forests are suffering because of the same doublespeak. Indonesia, the Democratic Republic of the Congo, Peru and Colombia all pledged in 2014 to end deforestation by 2030. Yet in official carbon-cutting pledges submitted to the UN since then, none have confirmed that commitment.

Corporations aren’t faring any better, especially the fossil fuel companies: “Many are still exploring for new reserves, when we already have more than can ever be safely burned.” The list of their other obfuscations is long, including investing billions in highly expensive “hydrogen fuel” technology in a vain attempt to salvage stranded fossil fuel assets.

The banks and financial system?

Next up, big banks – their financing of fossil fuels was bigger in 2020 than in 2016 or 2017, after the Paris climate deal. Top of the pile is JPMorgan Chase, despite it launching a “Paris-aligned financing strategy” and “aiming to finance and facilitate” $1tn in green initiatives by 2030.

Barclays and BNP Paribas both became founding members of the UN-backed Net-Zero Banking Alliance last month, yet both are in the top 10 financiers of fossil fuels since 2015. Over at BlackRock, the world’s biggest investor and a company that says climate change is a “global threat”, its “Carbon Transition Readiness” fund includes Chevron, ExxonMobil and other fossil fuel giants.

Get ready for more of this, and prepare to reject it all. If a policy proposal delays effective action — either because it makes the problem worse, or because it’s picked to subvert a much more effective action — those proposing it want you and yours to suffer tomorrow so they and theirs can add to their wealth today.

That’s truly a psychopathic trade, but one we’re used to. Time to not be used to it?