Yves here. It’s too soon to see if this cover story memorializing the deaths of Palestinian children is a turning point. But it at least signals a change in sentiment in Israel, and perhaps also a recognition that supposed victories are Pyrrhic, since Israel’s support abroad is evaporating. 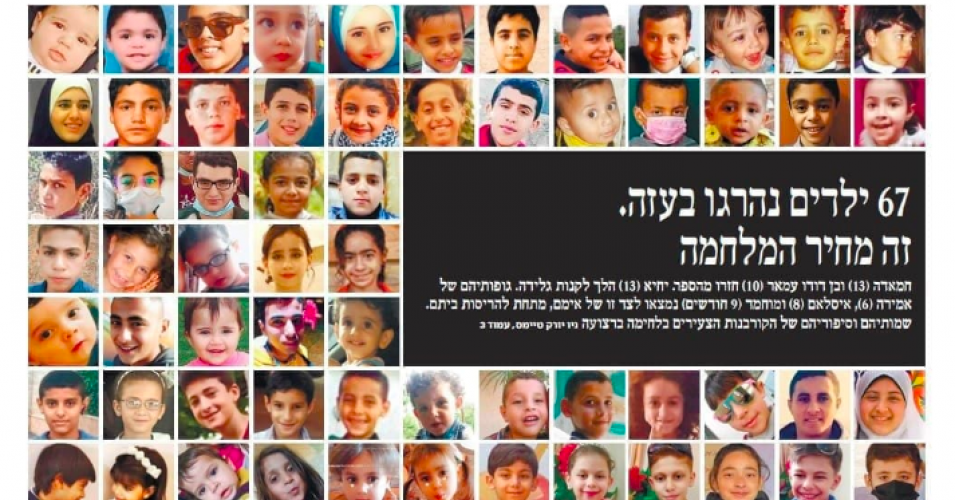 The Israeli newspaper Haaretz published the photos of 67 children who were killed in Gaza in the recent 11-day bombardment campaign by the Israel Defense Forces. (Photo: Haaretz)

“This is the price of war,” the headline read.

The article came a day after the New York Times published its own extensive account of the youngest victims of Israel’s most recent 11-day offensive, in which the IDF frequently targeted residential areas of Gaza, known as the world’s largest open-air prison.

“This is unprecedented,” Fishman tweeted.

While Haaretz leans to the center-left editorially, Israeli’s mainstream media has traditionally not covered the Palestinian casualties of the IDF’s military campaigns and the Israeli government’s violent policies, said journalist Khaled Diab.

As Diab tweeted, previous attempts by organizations in Israel to publicize the human cost of the IDF’s assaults have been repressed.

During the 2014 war, human rights group @btselem tried to counter the wilful silence in the Israeli media about the victims of Israeli airstrikes. It paid for a radio spot naming the dead children. The Israel Broadcasting Authority banned it.#Gaza https://t.co/eSCDXJ92YF

Others on social media took note of the unprecedented cover story.

Wow. Front page of the Israeli newspaper Haaretz features the faces of the all the Palestinian children killed in Gaza.

The headline reads: “67 kids were killed in Gaza. This is the price of war.” https://t.co/JMcvm3tg8x

In a publishing first, Haaretz, read by the israelis, prints the 67 name and faces of the Palestinian children, slaughtered by israelis | #Gaza pic.twitter.com/InmmAWdrKv

Thank you @Haaretz for publishing the faces of these 67 beautiful children.

Like the Israeli kids killed, they were victims of the endless bloodletting of a conflict & an occupation that will only end with Palestinian freedom and self-determination. https://t.co/s3W6TyBjVM

“Conversations around Israel/Palestine are changing in Jewish communities across the globe,” tweeted rabbi and author Abby Stein. “It’s about time.”

As Jewish Currents editor-in-chief Arielle Angell wrote last week in The Guardian, since Israel’s 2014 50-day assault on Gaza, which killed more than 2,100 Palestinians, rights advocates have “seen the growth of a small but committed Jewish anti-occupation movement [and] the last week and a half have brought an even larger circle of the community to a place of reckoning.”

We’ve seen Jewish politicians, celebrities, rabbinical students and others speak up loudly for Palestine. We’ve seen a powerful display of solidarity from Jewish Google employees, asking their company to sever ties with the IDF. At Jewish Currents, the leftwing magazine where I am now editor-in-chief, we asked for questions from readers struggling to understand the recent violence. We’ve been deluged. These questions taken in aggregate paint a striking portrait of a community at a turning point.

In Israel the Haaretz front page appeared to touch a nerve, garnering at least one outraged response from Oded Revivi, head of the Efrat Regional Council in an Israeli settlement in the West Bank, who said Haaretz‘s article was evidence that “people pity the wrong mothers.”

On social media, Mairav Zonszein of the International Crisis Group said rather than the “price of war,” the Haaretz front page specifically shows the price of “Israel’s “continued military rule, dispossession, discrimination, and violence.”