Yves here. Identifying the various mechanisms by which the rich pass their advantages to their offspring is an important line of inquiry. However, perhaps because it is hard to parse out for analytical purposes, one advantage of growing up in a wealthy household is acquiring class markers. For the British, it’s the posh accents (particularly the ones acquired at public schools) as well as learning skills that are typically expensive to acquire, like riding horses and skiing, or in the US, sailing (the exceptions for people of modest means are living in communities where those are routine activities, so for skiing, living in a mountainous areas, or in a place like New Zealand, where many middle class families sail). In America, another class marker that few members of the PMC seem to have mastered is the easy affability and beautiful manners of those who come from East Coast old money families.

The children of rich families tend to go to better quality schools, have higher cognitive skills, and complete more years of schooling. This column exploits unique data from the National Child Development study to determine these early childhood factors go on to have long-run impacts on an individual’s lifetime earnings, perpetuating a cycle of wealth. These results suggest that policies that equalise investments, such as improving school quality, could promote income mobility.

Rich parents have rich children. Why is that the case?

The children of rich families tend to differ from their poorer peers in multiple ways. They have fewer siblings and more educated parents. Their parents spend more time with them and send them to better quality schools. Their cognitive skills are higher, and they complete more years of schooling. All of these channels have been found to affect an individual’s earnings (Blanden et al. 2007, Keane and Wolpin 2001, Cunha and Heckman 2008, Daruich and Kozlowski 2020). However, in order to design policies to improve intergenerational mobility, we need to understand how these channels interact with each other in generating correlations in lifetime income across generations.

Take the example of school quality. Attending a high-quality school may have direct long-run effects on an individual’s lifetime earnings by creating a more valuable professional network, for example. However, attending a higher quality school can also have indirect effects on lifetime earnings through improved cognitive skills and/or the student staying in education for longer. Each of these channels are more likely to benefit the kids of richer parents, who tend to have access to better schools. In a new paper (Bolt et al. 2021a), we use mediation analysis to quantify the different channels through which parental income can impact an individual’s lifetime income. We find that intergenerational earnings persistence is mainly explained by differences in investments received during childhood, which in turn drive differences in cognition, years spent in education, and ultimately lifetime earnings.

We exploit unique data from the National Child Development Study (NCDS), which initially surveyed families of the entire population of children born in one particular week in 1958 and has followed them up until today.  The NCDS contains rich information on: family income and circumstances during childhood, indicators of quality time that parents spent with the children, proxies for the quality of schools that they attended, measures of cognitive skills, as well as final educational outcomes and earnings throughout the lifecycle.

Table 1 describes only a subset of the variables we use.  We combine these variables using a factor analytic approach to predict latent time investments, school quality and cognition, similar to Heckman et al. (2013).  The factor analytic approach allows us to use all measures available to us by treating them as noisy measures of school quality, parental time, and cognition. 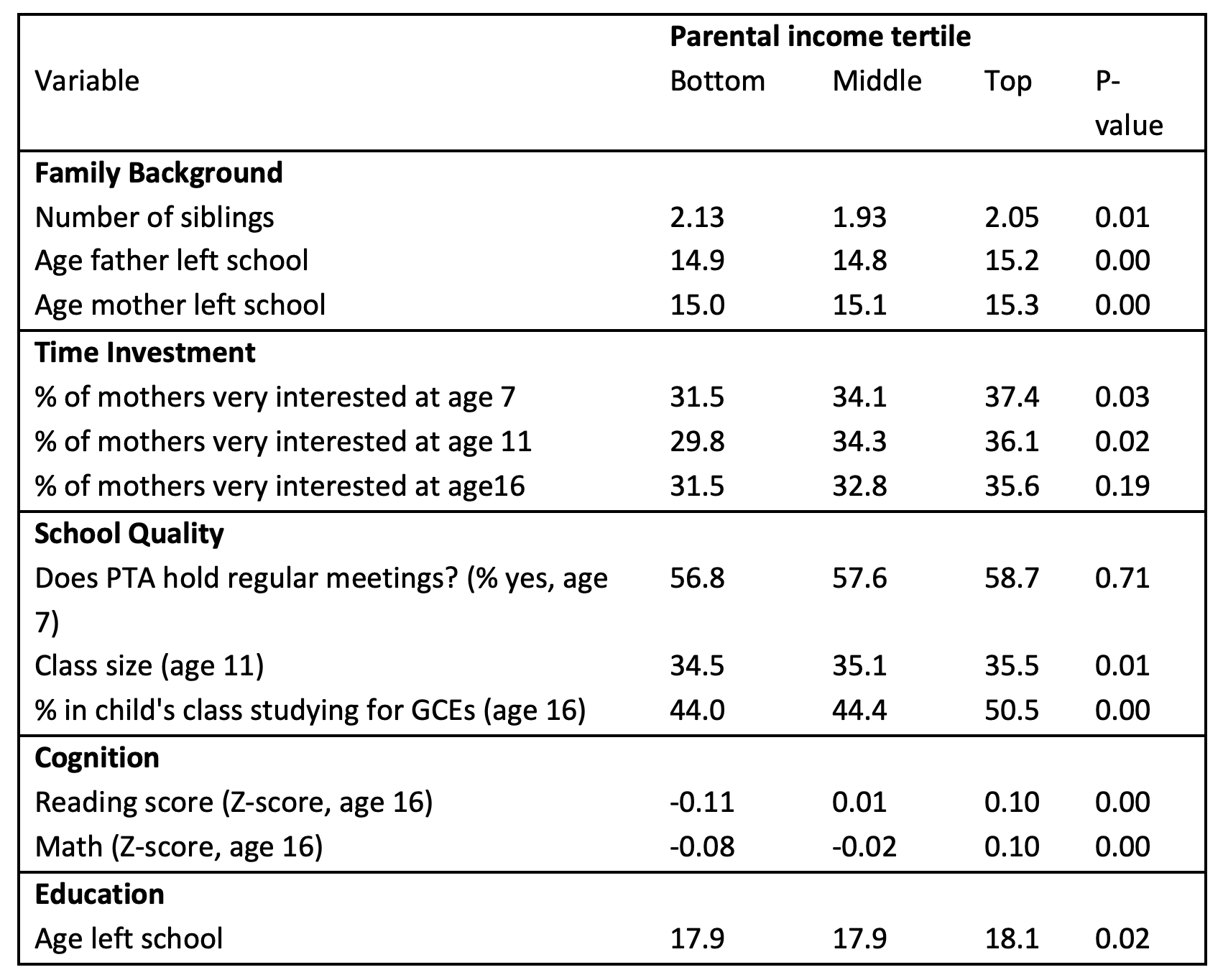 Note: The final column reports P-values from the F-tests testing the null hypothesis of equality of means across parental income tertiles. The time investment measures are teacher-reported measures asked when the children are 7, 11, and 16. Teachers can evaluate parents as very interested, a little interested, not interested at all. We report the fraction of mothers and fathers who are very interested.

We find the intergenerational elasticity of earnings, or IGE (which is a measure of the relationship between parental and child lifetime income), to be 0.32 for men and 0.24 for women. The first part of Figures 1 and 2 shows the fractions of this relationship explained by differences in family environment, time investments, school quality, cognition at 16, and completed years of schooling when we only allow for direct effects of each variable on lifetime income. These variables explain over half of the IGE –– 54% and 62% for men and women, respectively (the remainder is explained by factors beyond the ones we consider, such as better job networks).

Figures 1 and 2 summarise the main for results for men and women respectively. 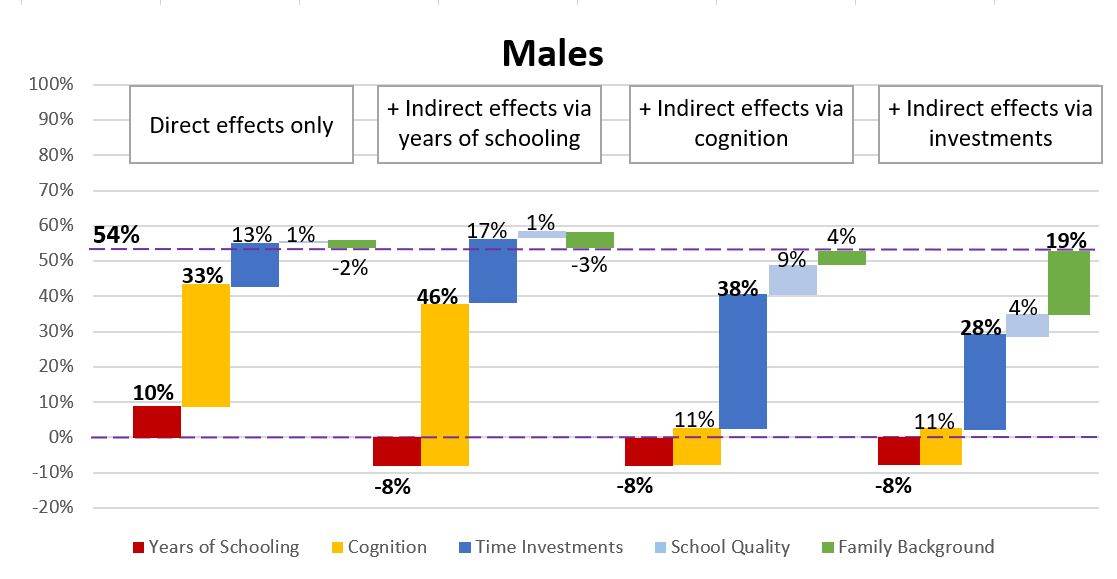 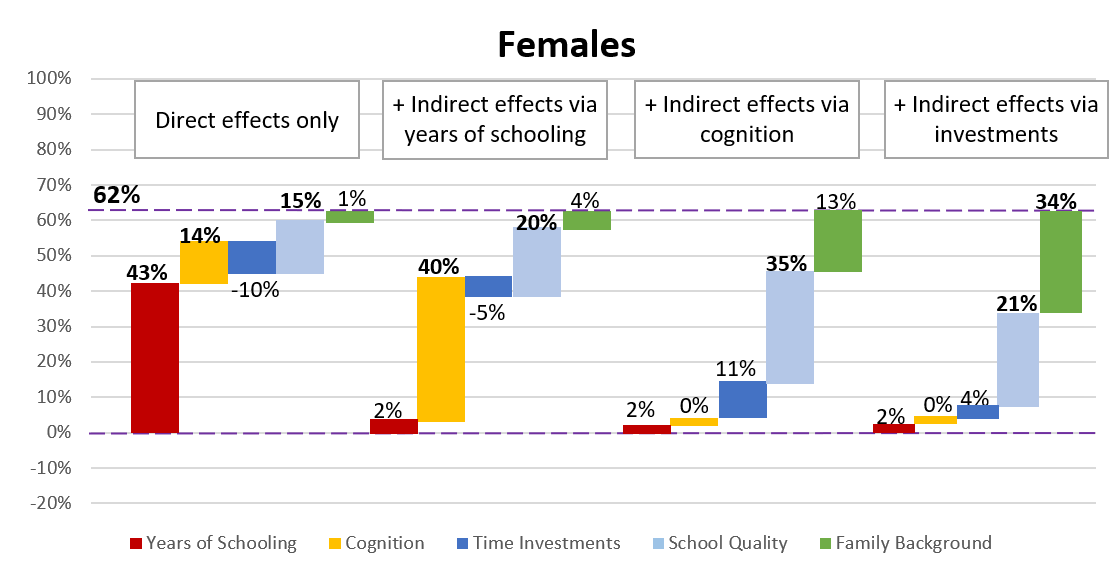 In the second panels of Figures 1 and 2, we allow for indirect effects via years of schooling. For example, for cognition, we now additionally account for its effect on lifetime income via its effect on years of schooling. Doing so, we find that the fraction of the IGE that was previously explained by differences in years of schooling can actually be explained by differences in cognition, instead. This suggests that it is not parental income per se, but the higher cognitive levels of children of high-income parents that encourages higher educational attainment.

The next level of our analysis, illustrated in the third panel of each figure, addresses the sources of cognitive skills.  We allow for parental time investments, school quality, and family background to affect the IGE not just directly and via years of schooling, but also via cognition. We then find that the fraction of the IGE that comes from the cognition gradient can largely be explained by differences in time and school quality investments received during childhood. This is consistent with previous literature that has found significant effects of parental investments on cognitive development (Attanasio et al. 2016).

Lastly, we let family background – which comprises mother’s and father’s education, and number of siblings – have an indirect effect by affecting investments. Once we do so, family background explains 19% (34%) of the IGE for men (women). This contrasts with the zero effect of family background that we find in our baseline analysis. In other words, family background matters, but only because it affects investments, which then affect cognition and years of schooling. This result is consistent with Carneiro et al. (2007) and Akresh et al. (2019), who find that increases in parental education lead to more favourable child outcomes. However, we also find that even if we control for family background, the remaining parental income gradient of investments explains 28% of the IGE. This suggests that higher parental income directly leads to higher investments in children, and not only runs through family background, a point developed in greater detail in Bolt et al. (2021b). This supports Bastian and Lochner’s (2021) conjecture that the increase in financial resources from programmes such as the Earned Income Tax Credit are what drives improvements in child outcomes.

Thus, we conclude that the main driver of intergenerational earnings persistence are differences in investments received during childhood which subsequently leads to improved cognition and more years spent in education.  Many of these investments, such as school quality, are the subject of public policy debate.  Our results suggest that policies that equalise these investments could improve income mobility.