Patient readers, today’s Water Cooler will be a mere template, since I must hasten to finish a post on the Delta variant. Talk amongst yourselves! –lambert

It is said that birds descended from dinosaurs. But it’s hard to imagine dinosaurs singing. I wonder when they learned, and why?

I feel I’m engaging in a macabre form of tape-watching. I’ve been thinking of new charts to monitor to alert us to the next outbreak, assuming there is one, but for now, the data from the South means I’ll stick to the status quo. 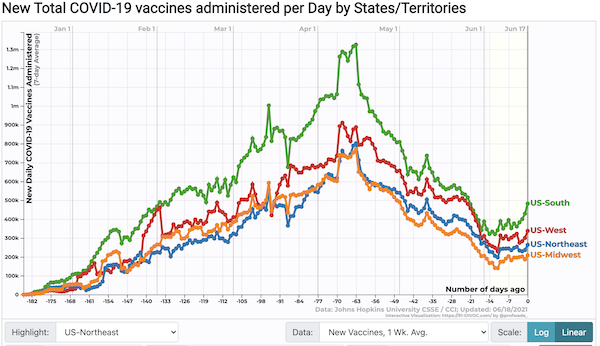 Up and down, up and down, with a rising trendline, and an uptick in the South. 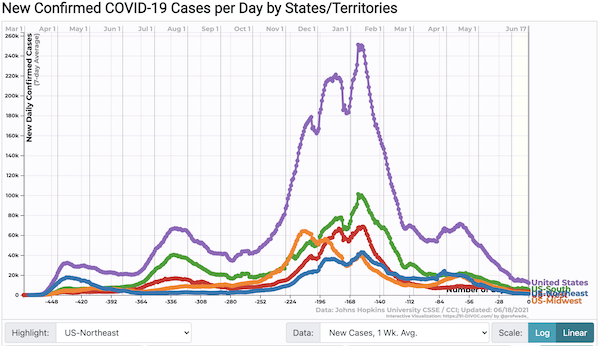 Good news from Montréal, a thread:

1) Montreal on Thursday reached another turning point in the #COVID19 crisis, but this time one in which all indicators were pointing dramatically toward the #pandemic coming under full control. In this thread, I will report on these heartening developments.

Here are the case counts for the last four weeks in the South (as defined by the US Census: Alabama, Arkansas, Delaware, Florida, Georgia, Kentucky, Louisiana, Maryland, Mississippi, North Carolina, Oklahoma, South Carolina, Tennessee, Texas, Virginia, West Virginia, and the District of Columbia): 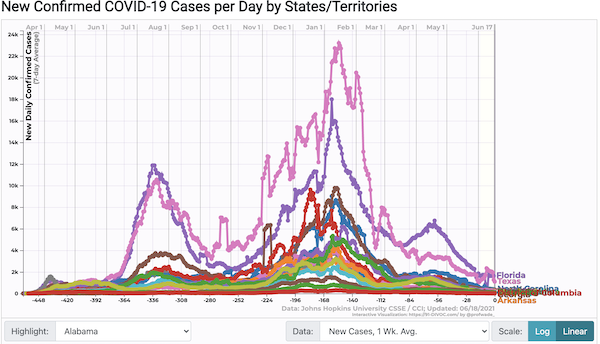 Texas seems to be fizzling out, but Florida, capital of Latin America, is not. Deaths (Our World in Data): It looks to me like al the regions have had three peaks, although of different heights and at different times. Except Southeast Asia, which has had two. I hate the idea that India could suffer even more, but….

Readers, feel free to contact me at lambert [UNDERSCORE] strether [DOT] corrente [AT] yahoo [DOT] com, with (a) links, and even better (b) sources I should curate regularly, (c) how to send me a check if you are allergic to PayPal, and (d) to find out how to send me images of plants. Vegetables are fine! Fungi and coral are deemed to be honorary plants! If you want your handle to appear as a credit, please place it at the start of your mail in parentheses: (thus). Otherwise, I will anonymize by using your initials. See the previous Water Cooler (with plant) here. Today’s plant (SC): An update on a long-standing project that is — finally (I think) — yielding desired results.

Background: 3-4 years ago I purchased seed from an Etsy seller that was represented to be Purple Milkweed, a very desirable (but rather rare and expensive, in spite of being endemic in US) and beautiful species of Milkweed. A ‘tell’ that the seeds were not the advertised species should have been the photo at the Etsy listing, which I recognized from an out-of-stock seed seller with his own website. The Etsy seller did not photograph his own blossoms, but lifted someone else’s photo. That was a bad sign.

I did not heed the back-of-mind worry about this, and ordered the seeds. I got two seedlings to survive to maturity but they did not blossom the first year. The second year, they did blossom, but not purple. The plant is Common Milkweed, another endemic inUS species, and a good one to have. It’s a vigorous plant and if you like Milkweed it will not disappoint as it spreads vigorously both by seed and by underground running.

I will leave my colony in place as it will draw the Monarchs to lay eggs on it and perhaps spare seedlings of the more desirable Purple, which are so small that they would be destroyed by the caterpillars.

In late 2019, I purchased seeds from a better seller (Prairie Moon Nursery), but botched the cold treatment and in 2020 I got 7 seedlings out of 160 seeds. Then I put organic fertilizer in the seedling pots, and this drew the interest of the local squirrel population, which promptly dug the seedlings out of their pots in search of the delicious-smelling fertilizer. This was happening to all my starts and I invested in humane capture traps and removed the offending pests. Squirrels appear to have a significant lack of self-control when enticed with peanut butter. I always put a lot in the traps so that they would have something to occupy themselves with while awaiting transport into exile. Interestingly, there are no squirrels in my garden this year, but the corvids are noisy. I wonder, uneasily, if they are gossiping about me. It is said that it is very unwise to offend a corvid; they remember and word gets around.

The attached photos are of the sole Purple (at least, I HOPE it’s Purple) survivor of this multiyear saga. It’s a disappointingly small plant (the black pot in the first 2 photos is 5″ square, which gives a sense of how small these “green shoots” are), but I will baby it and then push it and hope to actually SEE PURPLE BLOSSOMS by the end of Summer.

I cold-treated another batch of commercial Purple Milkweed seeds this Winter and got much better results — 30+% germination this year versus 9% last year. The trick appears to be setting up the germination trays in late Autumn and leaving them outside all winter. This works best if the trays have drainage holes as otherwise the trays may fill in rainfall and the seeds may wash out. The dismal 9% rate in 2020 was for seeds cold-treated in a refrigerator. Outdoor is working much better and I am still getting new seedlings, perhaps “intentional” stragglers that serve as a safety measure in case a late frost kills the main population that germinated on schedule.

If I get actual purple blossoms this year, I will send some triumphant photos. This plant gets quite big in subsequent years and I hope tohave a mass planting, which should be an appealing sight.

If you hate PayPal, you can email me at lambert [UNDERSCORE] strether [DOT] corrente [AT] yahoo [DOT] com, and I will give you directions on how to send a check. Thank you!2:00PM Water Cooler 6/8/2021