I also want to clarify a point that might be missed. Ivermectin is approved by the FDA. It does not need an additional FDA seal of good housekeeping for what is called “off label” use, as in a doctor prescribing it for some other application beyond which it was originally approved. A classic example of off label use is Botox to partly paralyze muscles for vanity cosmetic reasons. If you look at the approved uses of Botox, you’ll see this isn’t on the list.

There is also a fresh and more definitive Ivermectin study than the one Neuburger cites that comes out in favor of its use in the American Journal of Therapeutics, titled Ivermectin for Prevention and Treatment of COVID-19 Infection: A Systematic Review, Meta-analysis, and Trial Sequential Analysis to Inform Clinical Guidelines. As Lambert put it:

First rate authors and methodology, second rank journal, studies themselves pass muster but are not great. However, there are a ton of them. (Studies done or driven by doctors tend to be underpowered because they lack institutional muscle, unlike full-bore RCTs).

Ivermectin is cheap and exists. Undeveloped vaccines, with governments desperate to finance and promote them, are money in the bank for years. 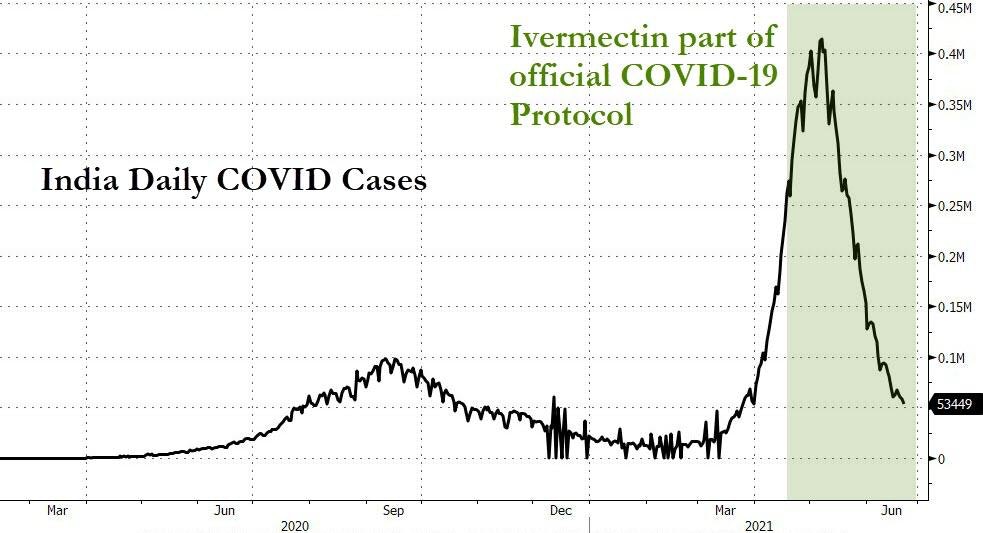 One of the challenges of the pandemic period is the degree to which science has become intertwined with politics. Arguments about the efficacy of mask use or ventilators, or the viability of repurposed drugs like hydroxychloroquine or ivermectin, or even the pandemic’s origins, were quashed from the jump in the American commercial press, which committed itself to a regime of simplified insta-takes made opposite to Donald Trump’s comments.”
—Matt Taibbi, Why Has “Ivermectin” Become a Dirty Word?

Matt Taibbi, in a free post at his Substack site, has started to look at a subject dear to my heart, the fact that the admonition to “follow the science” has become its opposite, an admonition instead to not follow the science if the path you tread makes you look insufficiently anti-Trump to your liberal peers and their gatekeepers.

Taibbi’s kick-off point is the controversy (or “controversy”) over the use of the drug ivermectin to prevent Covid-19 infection:

On December 8, 2020, when most of America was consumed with what The Guardian called Donald Trump’s “desperate, mendacious, frenzied and sometimes farcical” attempt to remain president, the Senate’s Homeland Security and Governmental Affairs Committee held a hearing on the “Medical Response to Covid-19.” One of the witnesses, a pulmonologist named Dr. Pierre Kory, insisted he had great news.

“We have a solution to this crisis,” he said unequivocally. “There is a drug that is proving to have a miraculous impact.”

Kory was referring to an FDA-approved medicine called ivermectin. A genuine wonder drug in other realms, ivermectin has all but eliminated parasitic diseases like river blindness and elephantiasis, helping discoverer Satoshi Ōmura win the Nobel Prize in 2015. As far as its uses in the pandemic went, however, research was still scant. Could it really be a magic Covid-19 bullet?

Kory had been trying to make such a case, but complained to the Senate that public efforts had been stifled, because “every time we mention ivermectin, we get put in Facebook jail.” A Catch-22 seemed to be ensnaring science. With the world desperate for news about an unprecedented disaster, Silicon Valley had essentially decided to disallow discussion of a potential solution — disallow calls for more research and more study — because not enough research and study had been done. Once, people weren’t allowed to take drugs before they got FDA approval. Now, they can’t talk about them. [emphasis added]

These are the liberal gatekeepers I’m referring to, the media who push, shape or ignore certain stories, and the Silicon Valley giants who ban their discussion, all to serve the anti-Trumpian cause.

Where’s the science in that?

What We Could Have Done

There are many ways we could have approached the Covid-19 crisis. One would would have been mitigation through eradication, just as we did with the SARS crisis. Recall that “we” (the world’s collective leaders) decided to handle that crisis without a vaccine but with a program of containment and elimination. SARS turned out to be less virulent, and the program worked.

As one scientifically knowledgeable person with “membership of several elite scientific institutions,” put it (quoted here), “The question … is when exactly was it decided to not contain it [Covid-19]. If you remember, some information came out about early and mid-February 2020 closed Senate meetings, after which senators were selling their shares in hotels and airlines, i.e. what was going to happen in late March was known at that time. But it was not in fact too late to contain it in early February, it could have been done with test-trace-isolate. … After all SARS-1 was contained even though it reached hundreds of cases in Canada and the US. … [T]his all becomes even more gruesome when one realizes that the decision of the US to allow it to become endemic meant the same decision was imposed on most of the rest of the world, as the US controls it. … But once it became clear the US will not eliminate and the EU will not eliminate, [other] countries had no choice, although they could have at least held out for vaccines instead of letting it rip.”

Another path would have been mitigation through prevention and treatment — to find medicines that prevented deaths by preventing infection, or treat infection with promising existing medicines and thus eliminate most hospital stays and contagion. The current Covid vaccines haven’t been shown to prevent infection, only symptoms of infection, and that’s by design. All this could have been done while vaccines were in development.

With real and effective non-vaccine options, the need for an immediate vaccine would have been greatly attenuated. If successful, we would have ended up with the same vaccines in the end — or better ones, ones designed to prevent infection — and also seen far fewer deaths and long-term health disabilities.

Covid and the Economy

Not only that, but economic consequences would have also been far milder. We’re in an economic crisis that, grave as it is, we haven’t yet begun to feel. The next big downturn could well be coming. Consider the following discussion on Krystal Ball and Saagar Enjeti’s new show Breaking Points with Washington Post economics reporter Jeff Steiner:

Unemployment is stubbornly high for a variety of reasons — one of which is a game of low wage-chicken fought between a workforce that’s not interested in returning to crappy jobs, and greedy employers not interested in paying more for work they used to get essentially for free.

(I saw this war first-hand in Las Vegas last week. At a resort hotel owned by the MGM Grand corporation, one of the two employment giants on the Strip, wages for their house-cleaning people were kept so low that the corporation couldn’t to hire enough people to guarantee daily room-cleaning service. Many rooms went uncleaned until final checkout. That was a wage-squeeze choice, and simple greed.)

At the same time, according to Stein, there’s zero appetite among DC elites for another round of non-corporate economic support. As a result, most of us will be stuck come September, when previous federal support to humans — as opposed to corporate clients of giant lobbying firms — comes to a permanent end.

What will people do when federal benefits run out? Will they simply submit to the “new normal” and go about their lives? Or will the appetite for rebellion in the country increase again? If it does, Joe Biden’s ramped-up national security state has an answer for that, and it’s not a pretty one.

None of this — none — would have happened if non-vaccine prevention and treatment options had been pursued in addition to then-non-existent vaccines. Yet again, “we” (the world’s collective leaders) chose not to do that.

The claims made on behalf of ivermectin as a prevention are considerable(pdf). But are they worth considering? Not in the Age of Trump, it seems, which is with us still. Even today, the follow-the-science crowd isn’t interested, despite the fact that ivermectin is already FDA-approved and thus has a considerable advantage over much more expensive (and, coincidentally perhaps, more profitable) options.

For example, consider this Indian research report, “Prophylactic role of ivermectin in SARS-CoV-2 infection among healthcare workers,” posted for comment in February of this year. It’s apolitical and therefore it attempts to follow the science. From the abstract:

Preventing HCWs [health care workers] from getting infected is a priority to maintain healthcare services. The therapeutic and preventive role of ivermectin in COVID-19 is being investigated. Based on promising results of in vitro studies of oral ivermectin, this study was conducted with the aim to demonstrate the prophylactic role of oral ivermectin in preventing SARS-CoV-2 infection among HCWs at All India Institute of Medical Sciences (AIIMS), Bhubaneswar.

Its conclusion: “Two-doses of oral ivermectin (300 μg/kg given 72 hours apart) as chemoprophylaxis among HCWs reduces the risk of COVID-19 infection by 83% in the following month. Safe, effective, and low-cost chemoprophylaxis have relevance in the containment of pandemic alongside vaccine.”

In plain language, 83% of Covid infection was prevented in the group that took two doses of ivermectin in the previous month. Read the study for the full details. Many similar results have been recorded — but the public has been trained by its media to fear any non-vaccine-only solution.

Why? Perhaps, a cynical person might say, because governments and liberal media are inclined to serve the greed of the pharmaceutical industry. Ivermectin is cheap and exists. Undeveloped vaccines, especially when governments are desperate to finance and promote them, are money in the bank for years.

Or perhaps because liberal opinion-makers are afraid of appearing, to their peers and corporate funders, to be insufficiently anti-Trump. Resistance Fever — the desire to get rid of Trump at any and all cost — drove almost the whole of non-right wing reporting and thinking during the last four years and a half. It’s driving that thinking still.

Or much more simply, perhaps all of our leaders have gone mad and decided, in an act of world-historical hubris, to use the crisis to enhance their power and place regardless of what happens to, well, everyone else on the planet.

It wouldn’t be the first time our rulers have placed their welfare above ours. And given the almost inevitable climate catastrophe, it won’t be the last.