Lambert here: This is a quietly devastating piece from Helmer. I have been not unimpressed with sentences from Biden on foreign policy. For example, “This is not about trust. This is about self-interest and verification” is quite a refreshing contrast to the blowhard messianism of Responsibility to Protect. But Helmer shows that at the paragraph level, Biden…. Well, Biden has problems. And I don’t think we’re dealing with anything like an equivalent to Eisenhower’s “Don’t worry Jim, if that question comes up, I’ll just confuse them.”

President Joseph Biden spent 33 minutes speaking at his press confernce to a group of US reporters pre-selected, coached,  and programmed by name, organisation and text of question. This operation made it impossible to allow Russian reporters to attend.

Biden’s speech to his press was longer than he managed by himself in the restricted-format session with President Vladimir Putin and their two foreign ministers and interpreters, which began the summit on Wednesday, and lasted 108 minutes. The 33-minute performance was also longer than Biden managed at the expanded format of the talks, which included press spokesmen, national security advisers, deputy foreign ministry officials and the two state ambassadors. That session lasted 91 minutes.

He added nothing, nor did he subtract anything from the G7 communiqué of three days ago, in which he accused Russia of “destabilising behaviour and malign activities, including its interference in other countries’ democratic systems, and to fulfil its international human rights obligations and commitments. In particular, we call on Russia to urgently investigate and credibly explain the use of a chemical weapon on its soil, to end its systematic crackdown on independent civil society and media, and to identify, disrupt, and hold to account those within its borders who conduct ransomware attacks, abuse virtual currency to launder ransoms, and other cybercrimes.”

Biden, together with the American journalists appearing at the two presidential pressers, also repeated the accusations of the NATO communiqué of two days ago.

Biden’s 33-minute performance demonstrated the clinical motor and cognitive symptoms which remain state secrets in Washington. They are now better understood in Moscow than by US experts on the 25th Amendment.

In the few impromptu remarks Biden recorded there were flashes of hostility. About China’s President Xi Jinping, he said:  “Let’s get something straight. We know each other well. We are not old friends. It’s just pure business”. Asked what he would do if Alexei Navalny dies, Biden said: “That’s not a satisfying answer: ‘Biden said he’d invade Russia.’  You know, it is not — you know.  By the way, that was a joke.  That’s not true. But my generic point is, it is — it is more complicated than that.”

“I’m not confident he’ll change his behaviour,” Biden rounded on a reporter challenging his capacity to deter Putin, as he tried to leave the press room. “Where the hell — what do you do all the time?  When did I say I was confident?  I said —  I said — what I said was — let’s get it straight.  I said: What will change their behavior is if the rest of world reacts to them and it diminishes their standing in the world.  I’m not confident of anything; I’m just stating a fact.”

When Putin was asked by a Russian reporter if he has “any new illusions as a result of this meeting?”, he replied: “ I didn’t even have the old ones, and you’re talking about the new ones. Where did you get the idea about illusions? There are no illusions and there can be no illusions.”

Follow Putin’s question-and-answer session, then click to watch Biden’s press conference. The official transcript of Biden’s remarks issued by the White House has been edited and parts of Biden’s speech erased. 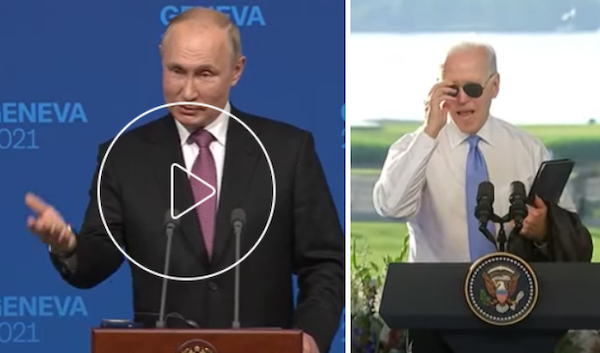 Source, left: http://kremlin.ru/ – this is the Russian original; English translation has not yet been completed by the Kremlin. Right, https://www.whitehouse.gov/ — the White House does not publish foreign language translations.

According to Biden, “the reason [the talks] didn’t go longer is when the last time two heads of state spent over two hours in direct conversation across the table going into excruciating detail? You may know of time; I don’t. I can’t think of one. So we didn’t need, as we got through and as we brought in the larger group, our defence, our intelligence, our foreign – well, my foreign minister, foreign minister, my Secretary of State was with me the whole time, our ambassador, et cetera, brought everybody in, we had covered so much, and so there was a summary done by him and by me of what we covered. Laberov [Lavrov is the spelling in the White House text] and Blinken talked about what we had covered. We raised things which required more amplification… And — and so it was — it was — kind of, after two hours there, we looked at each other like, ‘Okay, what next?’”

Compare what the two presidents said and how they said it: 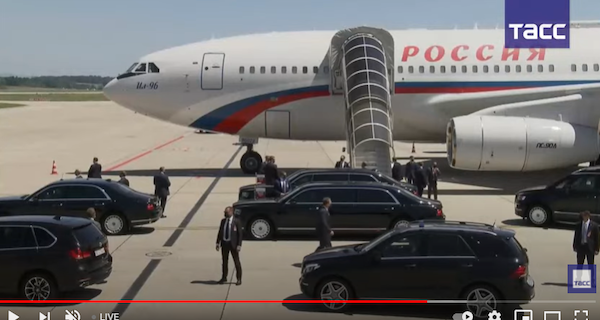 The Russian security guard at President Putin’s aircraft on the Geneva airport tarmac, awaiting his descent from the gangway. The Geneva press reported that Putin had requested no ceremonial welcome by Geneva canton or federal Swiss officials, implying the Russian president was snubbing the Swiss. In fact, this was a security issue: no Swiss personnel were allowed inside the perimeter formed by the Russian guards and vehicles. Source: https://www.youtube.com/ Putin met the Swiss federal president later in the day indoors, when the combined Swiss and Russian security was optimum. Putin then gave President Guy Parmelin more time and attention than President Biden had given him. 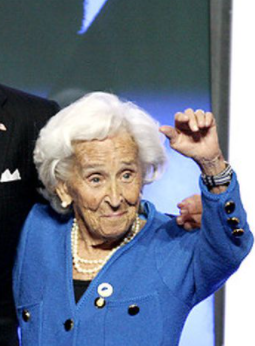