COVID-19 and the policies enacted to tackle virus transmission have led to a wave of unemployment in Europe and the US. This column uses data from Austria to examine the impact of downsizing by a firm on the health of people who remain at the firm. It finds a significant increase in drug prescriptions and hospitalisations following mass layoffs, driven primarily by mental and cardiovascular conditions. The authors argue that stress due to fear of job loss, rather than increased workloads, is the more likely explanation.

Downsizing is a frequently used tool to stabilise firms in distress. Recently, COVID-19 and the policies enacted to tackle virus transmission have led to a wave of unemployment in Europe and the US (e.g. Baek et al. 2020). This is particularly concerning in times of a pandemic because an increase in unemployment can exacerbate problems in the already strained health sector. The health effects of job loss and labour market shocks have been widely documented in the literature (e.g. Kuhn et al. 2009, Adda and Fawaz 2021). In a recent study (Ahammer et al. 2020), we show that downsizing also affects the health of workers who remain in the firm. These effects can occur when staff reductions lead to psychological stress in the workforce. This can be the case, in particular, if the remaining workers fear for their own jobs or are pushed into new tasks and responsibilities.

To investigate the health effects of downsizing, we look at workers who remained in firms that underwent mass layoffs between 1998 and 2014 in Upper Austria. Since surviving a mass layoff is not random, we construct a control group of workers from other firms who themselves survive a mass layoff, but at a later point in time. These workers should have similar unobservable characteristics compared to our ‘treatment’ group and differ only in the timing of the mass layoff they are exposed to.

Our central results, based on dynamic difference-in-differences estimates, suggest a significant increase in drug prescriptions and hospitalisations following mass layoffs among workers who remain with the firm. These results are shown in Figure 1. In each graph, the dots indicate the estimated effect of mass layoff in a certain quarter, relative to the base quarter (the quarter of the mass layoff). The blue area is the 95% confidence interval and the dashed line is the 90% confidence interval of the estimate. These effects are persistent and, in fact, become stronger over time. This is not surprising, given that stress arguably takes some time to take its full toll on the body. As recent medical studies have shown, even minor stressful events can lead to serious health problems that linger for ten years or longer (e.g., Korkeila et al. 2010). 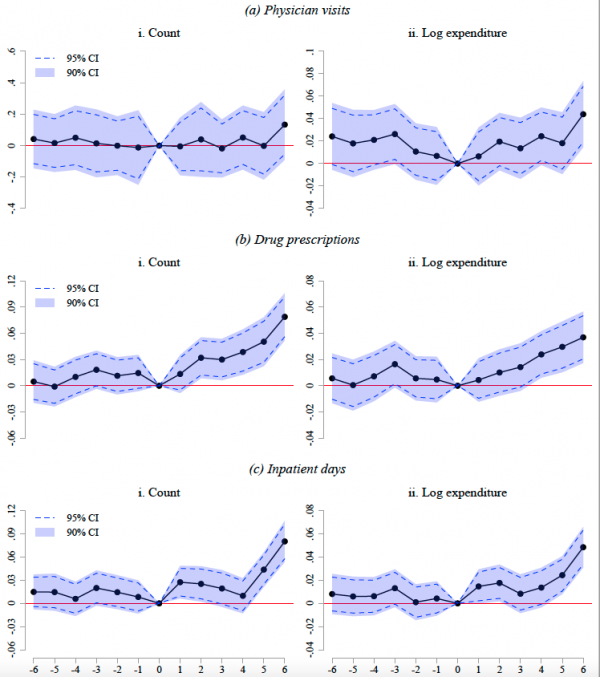 Notes: These graphs show dynamic difference-in-differences estimates for the effect of a mass layoff on health outcomes of workers who remain with the firm, each over a period of 6 quarters before to 6 quarters after the mass layoff. The 95% confidence interval is indicated by the blue area, the 90% confidence interval is shown as a dashed line. In all regressions, we control for worker age and tenure.

These effects appear to be driven primarily by mental and cardiovascular conditions, both of which have been linked to work stress in the occupational health literature. For example, workers are 20% more likely to seek psychotherapy following mass layoffs. Prescriptions for antidepressants, however, increase later and to a lesser extent, which is also true for musculoskeletal conditions. For cardiovascular drugs such as beta blockers or anti-cholesterol drugs we see an immediate increase, but not for strokes or heart attacks. In general, it seems that workers with pre-existing conditions tend to be more affected by downsizing. We find no evidence for effects on alcohol or drug abuse.

Fear Of Own Job Loss Or Higher Workload?

How can these health effects be explained? Are workers afraid of losing their own jobs? Or does stress arise because downsizing leads to restructuring and thus to a greater workload? We consider the latter to be less likely, because our estimated health effects are somewhat stronger for smaller layoffs. When fewer workers are laid off, it is less likely that a systematic redistribution of work tasks will follow. Furthermore, mass layoffs have little effect on wages of the remaining workers in our sample. If they were given more responsibilities following mass layoffs, we would expect salary jumps sooner or later, but this is not consistent with our results.

Stress due to fear of job loss, on the other hand, is the more likely explanation. This is supported by the fact that more vulnerable workers, such as older low-wage workers, are more affected. Furthermore, the health effect occurs only in communities with above-average unemployment rates and is larger for workers whose spouses earn below-average wages. These groups of people each face the greatest costs of potential unemployment and therefore will also tend to be more fearful of job loss.

Downsizing thus affects the health of workers who remain at the firm. Such externalities impose significant costs on the firm itself, as sick leaves increase substantially after mass layoffs. Evidence for such spillovers has been scarce in the literature. This has important implications for policy and management. If health effects are not offset by compensating wage increases, a specific layoff tax along the lines of Blanchard and Tirole (2008) could be useful. Such a tax would internalise the external effects of (mass) layoffs, such as costs for unemployment benefits. Likewise, measures such as targeted health counselling or prevention can be helpful in dampening health effects on workers remaining in the company.