Yves here. The US is actively pre-positioning the blame cannons in case Delta becomes a problem in the US. Officials and the press have been hammering on the risk posed by areas with low Covid vaccination rates, and then marshaling data that seems to support that…due to profoundly incomplete reporting. All Covid positive tests of the unvaccinated are reported as Covid cases. But Covid positive cases of the vaccinated? They are not reported to the CDC unless the patient is hospitalized.

One MD correspondent, in a relatively low vaccination rate state, told us that one week in late June, he had Covid positive findings in >10 patients running over 2:1 for vaccinated to unvaccinated. While none of the vaccinated were sick enough to be admitted to a hospital, nearly all were sick:

Multiple COVID positive patients in my practice the past few days. Most of them with mild URI symptoms – cough and congestion – and just not feeling well. No one profoundly ill – nowhere near needing to be admitted. I have told them all to stay home. The HD [hospital director] told at least one of the vaccinated that they had no obligation to quarantine – the unvaccinated were told to stay home for 10 days. I was again chided for even sending the vaccinated to be tested.

If people are sick enough to cough, intuitively you’d think their viral load might be high enough for them to transmit Covid too. But the CDC is choosing to fly blind, in a great disservice to the American public.

This is near latest data on new Covid cases, comparing the UK and Europe, and using data from the FT: 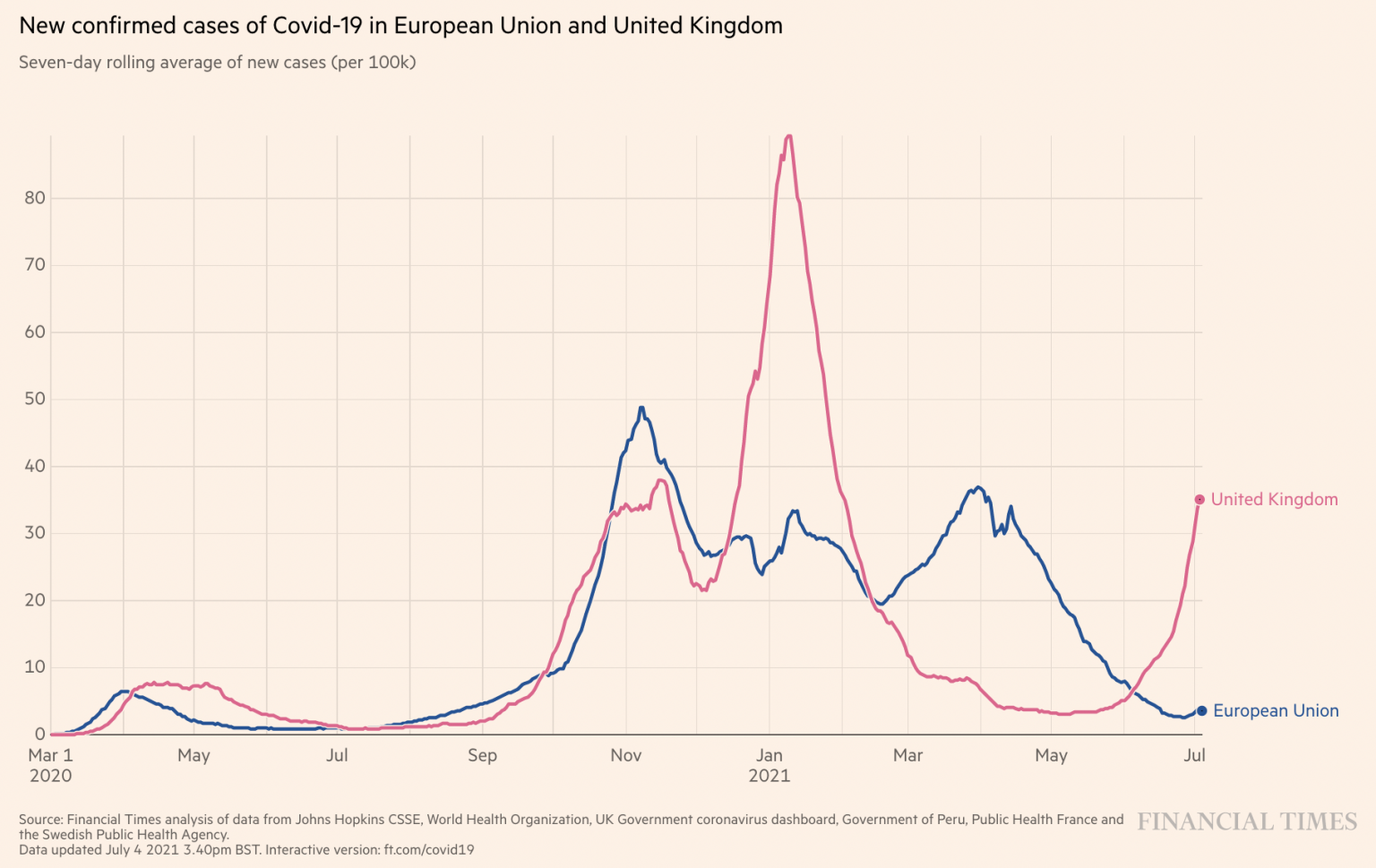 The UK is aberrational: remember the EU is five times the size of the UK in population terms.

Throw in the USA, Australia and India for further comparison  and the UK experience is even more peculiar: 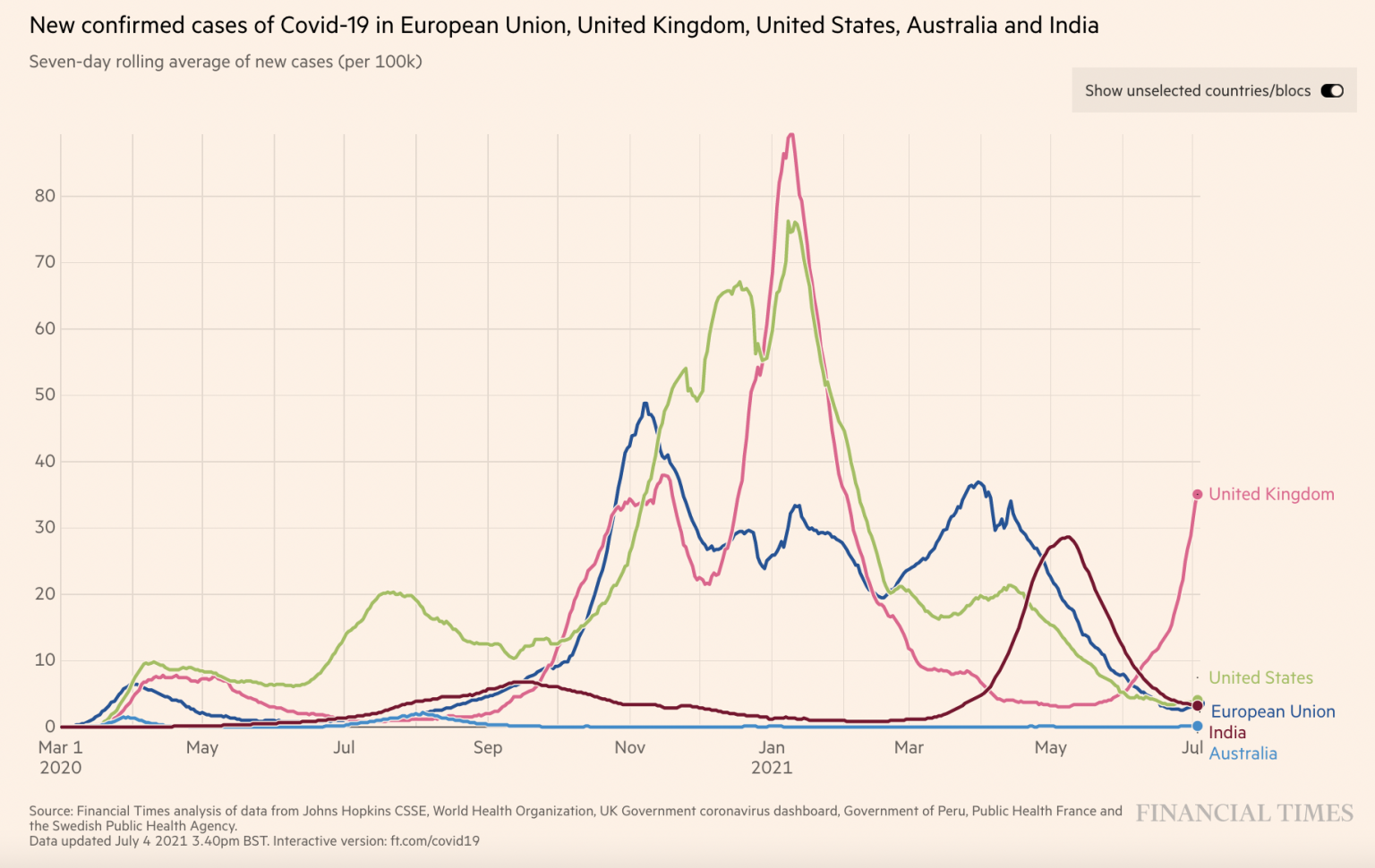 Nothing about the UK experience of the delta variant of Cvid can be considered normal.

I accept that it is also true that hospitalisation rates are lower than at the beginning of this year, and so too are death rates (thankfully). But there is no evidence that this does not mean that there is substantial harm from this illness, still. People are seriously ill with it, and significant numbers suffer long Covid effects.

Despite this very obvious fact the UK is choosing to be the outlier in its response to Covid now. We are going to abandon all public health precautions, even though the growth in case rates suggests that  there may be 70,000 cases a day by July 19. In effect, the UK is choosing to be the Delta variant incubator for the world. And, given that it is still the case that only 50% of the UK population is vaccinated (and many who are now likely need a booster, which is so far unavailable) the likelihood that we are also becoming a new variant incubator is very high indeed.

I may of course be wrong, but this shift in the balance of power does not seem to be by chance to me. I think the toppling of Hancock was planned, albeit he did not help himself. Hancock had seen enough of the NHS to known Sunak and Javid are wrong: he had to go as a result.

And in whose interests are Sunak and Javid working? It’s certainly not that of the people of the UK: we are the guinea pigs who must get ill in their experiment.

It’s also certainly not in the interests of the UK economy as a whole. Removing all economic support for the economy at the time when another wave of Covid is being deliberately unleashed on it does not make sense: business stress will very obviously increase as a result. This is not a sound economic plan.

So who gains? As far as I can see two interests gain. One is the ideologue: finally, Ayn Rand will have her day. That is what Javid, most especially, wants. We must suffer the consequences of life without state support. That is Javid’s plan. Life in the raw is to be unleashed on us. He believes it for our own good that we must suffer.

And pharmaceutical companies gain. They are already guaranteed billions and maybe trillions in profit from Covid as a result of vaccine manufacture. The US and EU have refused to open up vaccines for all, for free: market interests have already come first. And now it seems that the aim is to make sure that new variants can develop. This will perpetuate demand for vaccines as any possibility of controlling and effectively containing Covid is abandoned. This then will create a demand for updated vaccines when an elimination strategy would remove this source of profit for the pharmaceutical companies.

So, we are to suffer the raw harshness of market-based logic so that some in that market, with rights reinforced by the state, can profit unduly. I find it very hard to offer any other explanation for what is about to happen in the UK.

What I hope is that the rest of the world realises this. I hope they call it out. I sincerely hope that they isolate us, as would be the only rational reaction, starting with a block on UK attendance at the Olympics, I would suggest. And then they might have a hope of being protected from our insanity. But it would only be a small hope. We are literally threatening the well-being of the world right now. And that is unforgivable.