Yves here. While this post addresses one of the questions often raised about energy sources meant to replace carbon-generators like oil, I wonder what our readership will make of it. First, and over my pay grade, are the assumptions about wind turbine longevity and disposition costs. A reader recently claimed that in his ‘hood, about 1/3 of the wind turbines were dead, and he claimed they could not be repaired.

A second issue is that my impression is that possibly high lifecycle costs, in carbon terms, is not one of the top reservations about wind turbine technology. A biggie is that they are an erratic power source. However, that defect does add to total carbon costs, in that wind turbines presuppose batteries or other means of energy storage, at least for some (most?) of the output. There are some low tech energy storage approaches like geothermal wells, but again, my impression is relatively few houses and commercial buildings incorporate them.

A third issue is that wind turbines use rare earths, which while not actually so rare, are nasty to mine and China dominates their extraction.

And finally, environmentalists worry about habitat damage, particularly harm to birds and bats.

Wind turbines are an absolute joke. Has anyone actually figured out the amount of carbon emissions emitted for the entire process from initial construction of the components and land development (construction machinery emissions)? — Mike M.

Thank you for this apparent attempt at a “gotcha” question, as it gives me the opportunity to reply with a resounding yes! People have studied, in detail, the amount of carbon pollution emitted during the life of a wind turbine.

In fact, this type of analysis constitutes an entire branch of research known as “life cycle assessment,” with its own handbooks, internationally agreed-upon standards, specialized software, and peer-reviewed journals.

To conduct a life cycle assessment of a wind turbine, or any other product, researchers begin by diagramming each stage of its existence, from manufacturing through end-of-life disposal. Next, they inventory the energy and raw materials consumed at each stage, such as the steel, fiberglass, and plastic needed during a wind turbine’s manufacturing, the diesel burned by ships and trucks in transporting turbine parts from factory to construction site, and the energy used during construction, operation, maintenance, and eventual deconstruction and recycling or disposal.

With this information in hand, researchers calculate the carbon pollution produced during a wind turbine’s life cycle — in other words, its carbon footprint.

Search online for the keywords “life cycle assessment” and “wind turbine” and you’ll retrieve dozens of published papers on this topic. Here’s a non-comprehensive chart of such papers from the past five years:

The carbon footprint of wind turbines 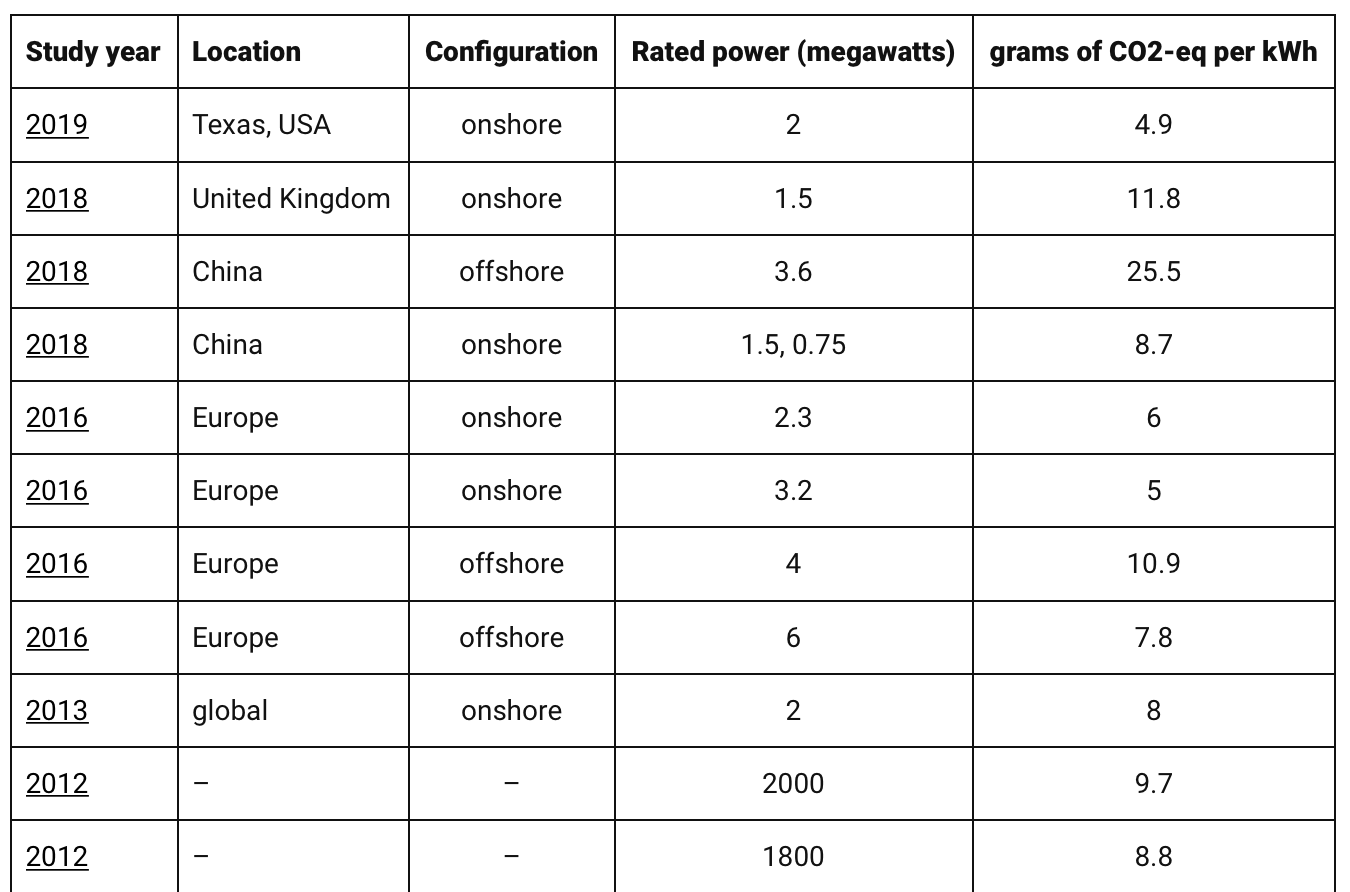 This chart shows how much carbon dioxide, per kilowatt-hour of electricity generated, can be attributed to a wind turbine during its life from cradle to grave. If you’re wondering about those awkward-sounding “grams of carbon dioxide-equivalent,” or “CO2-eq,” that’s simply a unit that includes both carbon dioxide and other heat-trapping greenhouse gases, such as methane.

You can see that the results vary by country, size of turbine, and onshore versus offshore configuration, but all fall within a range of about five to 26 grams of CO2-equivalent per kilowatt-hour.

To put those numbers in context, consider the two major fossil-fuel sources of electricity in the United States: natural gas and coal. Power plants that burn natural gas are responsible for 437 to 758 grams of CO2-equivalent per kilowatt-hour — far more than even the most carbon-intensive wind turbine listed above. Coal-fired power plants fare even more poorly in comparison to wind, with estimates ranging from 675 to 1,689 grams of CO2 per kilowatt-hour, depending on the exact technology in question.

There’s another crucial difference between fossil fuels and wind turbines. A coal or natural gas plant burns fuel — and releases carbon dioxide — every moment that it runs. By contrast, most of the carbon pollution generated during a wind turbine’s life occurs during manufacturing. Once it’s up and spinning, the turbine generates close to zero pollution.

What’s more, wind turbines often displace older, dirtier sources that supply power to the electricity grid. For example, after a new wind farm connects to the grid, the grid operator may be able to meet electricity demand without firing up a decades-old, highly polluting coal plant. The result? A cleaner, more climate-friendly electricity grid.

In fact, it’s possible to calculate a carbon “payback” time for a wind turbine: the length of time it takes a turbine to produce enough clean electricity to make up for the carbon pollution generated during manufacture. One study put that payback time at seven months — not bad considering the typical 20- to 25-year lifespan of a wind turbine. Bottom line: Wind turbines are far from a joke. For the climate, they’re a deal too good to pass up.