Yves here. As readers may have worked out, even at my days at McKinsey, I was a big fan of qualitative analysis. One big reason is that once you get outside transaction data (X sold at Y price on Z date), most quantitative data is “squishy” because it depends on the conditions under which it was collected, but those who handle that kind of information tend to forget its limitations. This is an even bigger in business than in economics. As we explained in our 2006 Conference Board article, Management’s Great Addiction:

Corporate America is ob-sessed with numbers. Analyst meetings focus on earn-ings expectations, revenue growth, and margins rather than business fundamentals. PowerPoint presentations look naked if they lack charts and graphs to buttress their three-point message. Lofty corporate mission statements are often trumped by pressure to “hit the targets.” Job applicants are advised to stress tangible achievements and, above all, to quantify them. And the ultimate sign of a trend past its sell-by date: a January 2006 Business Weekcover story, “Math Will Rock Your World.”

This love affair with figures increasingly looks like an addiction. Numbers serve to analyze, justify, and communicate. But they are, fundamentally, abstractions. When numbers begin to assume a reality of their own, independent of the reality they are meant to represent, it’s time for a reality check. Some are already frustrated with the trend: In a recent McKinsey survey of more than a thousand public-company directors, most said they wanted to hear less about financial results and more about things not so readily quantified, such as strategy, risks, leadership development, organizational issues, and markets.

Metrics presuppose that situations are orderly, predictable, and rational. When that tenet collides with situations that are chaotic, non-linear, and subject to the force of personalities, that faith—the belief in the sanctity of numbers—often trumps seemingly irrefutable facts. At that point, the addiction begins to have real-world consequences.

In an important Nassim Nicholas Taleb paper I came across much later, The Fourth Quadrant, he identifies describes phenomena that are unsuited to statistical analysis. I was lucky enough to see him speak about it in 2009. From my writeup:

…his “fourth quadrant” construct. He sets up a 2 by 2 matrix. On one axis is phenomena that are normally distributed versus ones that have fat tails or unknown tails or unknown characteristics. On the other axis is the simple versus payoff from events. Simple payoffs are yes/no (dead or alive, for instance). “How much” payoffs are complex.

Models fail in the quadrant where you have fat or unknown tails and complex payoffs. A lot of phenomena fall there, such as epidemics, environmental problems, general risk management, insurance, natural catastrophes. And there are phenomena in that quadrant that have very complex payoffs, like payoffs from innovation, errors in analysis of deviation, derivative payoffs.

When Queen Elizabeth II asked economists why none of them had seen the Great Recession coming, they presented her with a number of reasons but forgot to mention the main one: they hadn’t paid attention to ‘red lights’ that had been flashing in the qualitative survey data from consumers and producers that predicted the downturn. Chief among these was the fear of unemployment which, as this column shows, predicts upticks in unemployment 12 months ahead.

Predicting economic downturns and rising unemployment is notoriously difficult.  Economists usually characterise recessions as random shocks which, by construction, cannot be predicted.  This is a mistake.

Several economists such as Nouriel Roubini did in fact spot the recession coming but were ignored.1 The recession started in the US housing market in 2006 and spread, just as the Great Depression did (Blanchflower 2008).  Early warning signs of the impending Great Recession were apparent in business and consumer surveys and purchasing manager indices (PMIs) with similar stories from around the globe, but only a very few policymakers were willing to take them at face value that they signaled an imminent recession.

The early literature on the causes of unemployment emphasised the role of labour market institutions in either causing or exacerbating the conditions leading to recession (Blanchard and Wolfers 2000, Nickell 1997, Layard and Nickell 1986, Bean 1994, Nickell et al. 2005). These were predominantly time-series country-level studies with a small number of country-year observations.  They were heavily criticised for their lack of robustness to the inclusion of country and time fixed effects (ILO 1995, Howell et al. 2007, Heckman 2007, Freeman 2007). With few countries and annual or quarterly data, these studies suffered from over-parameterisation.  They also relied on macro-aggregate data that are quasi-fixed – such as labour market institutions – and broad indicators of economic conditions which had a poor track record in being able to estimate economic outcomes.  Countries that had the biggest increases in unemployment in the Great Recession had housing market bubbles (the UK, the US, Spain, and Ireland), big financial sectors (the UK and the US), and were open to foreign trade (Sweden). Of note is that countries with high job protection and unionisation rates did best in the pandemic.

A new wave of economic forecasting emerged in the early 2000s with the advent of what became known as ‘the economics of walking about’, a term coined by one of us when a member of the Monetary Policy Committee of the Bank of England (Blanchflower 2007).  This new economics was designed so that economists could get a real-time picture of what was happening from economic actors on the ground – workers, consumers, producers, and agents, all of whom had a ‘front row’ seat in terms of what was going on in daily economic transactions.  The data were contained in a range of qualitative surveys which asked them what they thought of the economic situation now and going forward.  These included questions such as “How do you expect the number of people unemployed in this country to change over the next 12 months?” The question has been asked of workers and consumers, as well as producers, across many countries on a biweekly or monthly basis.

In the last decade or so a body of research, reviewed in Blanchflower and Bryson (2021), has emerged using these high-frequency qualitative data to predict unemployment. Aggregating those perceptions to country-month or country-year means analysts are leveraging insights from ‘the wisdom of crowds’ which, as Surowiecki (2005) noted, often produces more accurate assessments of situations than those offered by ‘experts’. A consensus has emerged: these qualitative data contain real information about the state of the economy which can predict future downturns.

Most of these studies are single-country studies and they predate the COVID-induced recession.  In Blanchflower and Bryson (2021), we contribute to this literature using panel data for 29 European countries over 439 months between January 1985 and July 2021 to predict changes in the unemployment rate 12 months in advance based on individuals’ fears of unemployment, their perceptions of the economic situation and their own household financial situation.  We find individuals’ fears of unemployment predict subsequent changes in unemployment 12 months later in the presence of country and year fixed effects and lagged unemployment.  Individuals’ perceptions of the economic situation in the country and their own household finances also predict unemployment 12 months later. Manufacturing firms’ views on what will happen to employment in the months ahead also play an independent role; the lower they are the higher is unemployment months ahead.  Other qualitative variables such as PMIs are also found to be predictive of turning points.

The findings underscore the importance of the ‘economics of walking about’ and suggest that global recessions such as the Great Recession are not simply sudden random shocks to the economy.  Rather, they unfold gradually and can be predicted in advance with the right data.  These data, which are readily collected in social surveys, purchasing manager surveys and by agents such as those working for the Bank of England, have a number of advantages over other survey series.

Figure 1 illustrates for the UK.  It plots the fear of unemployment series against the unemployment rate 12 months ahead, and shows a marked rise in fear from the start of 2007 and then unemployment rises.  Similarly fear starts to rise again from the start of 2015 and then unemployment rises.  Figure 2 plots quarterly labour market scores from the Bank of England’s Agents on recruitment difficulties and employment intentions which follow a very similar path.  They declined rapidly in 2007 and again from 2018.  These scores were flashing red by August 2008 when the MPC forecast in its Inflation Report there would be no recession despite the fact that one had started in April in the UK (and most other EU countries), as suggested by their own agents.

Figure 1 UK: Fear and the unemployment rate 12 months ahead 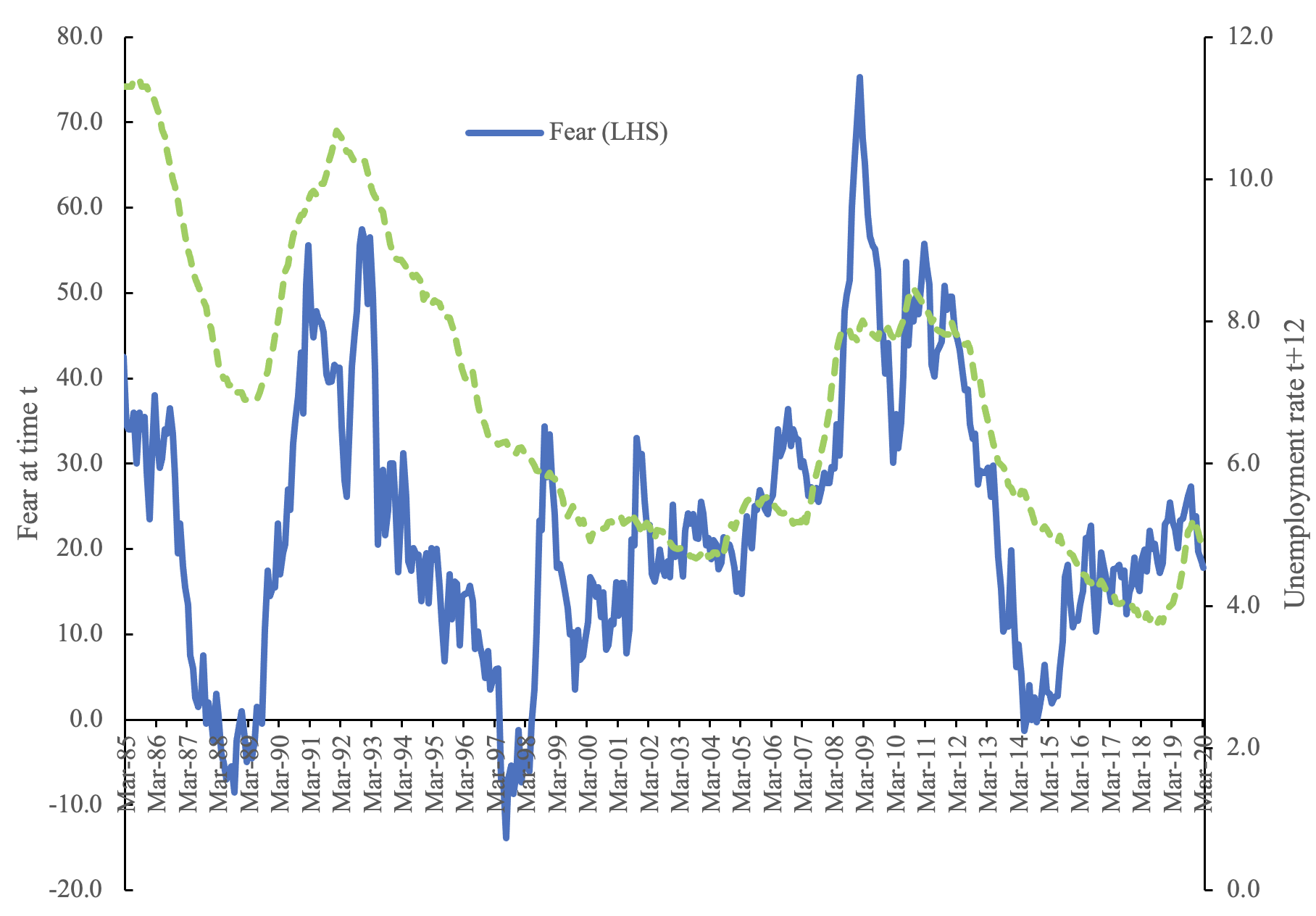 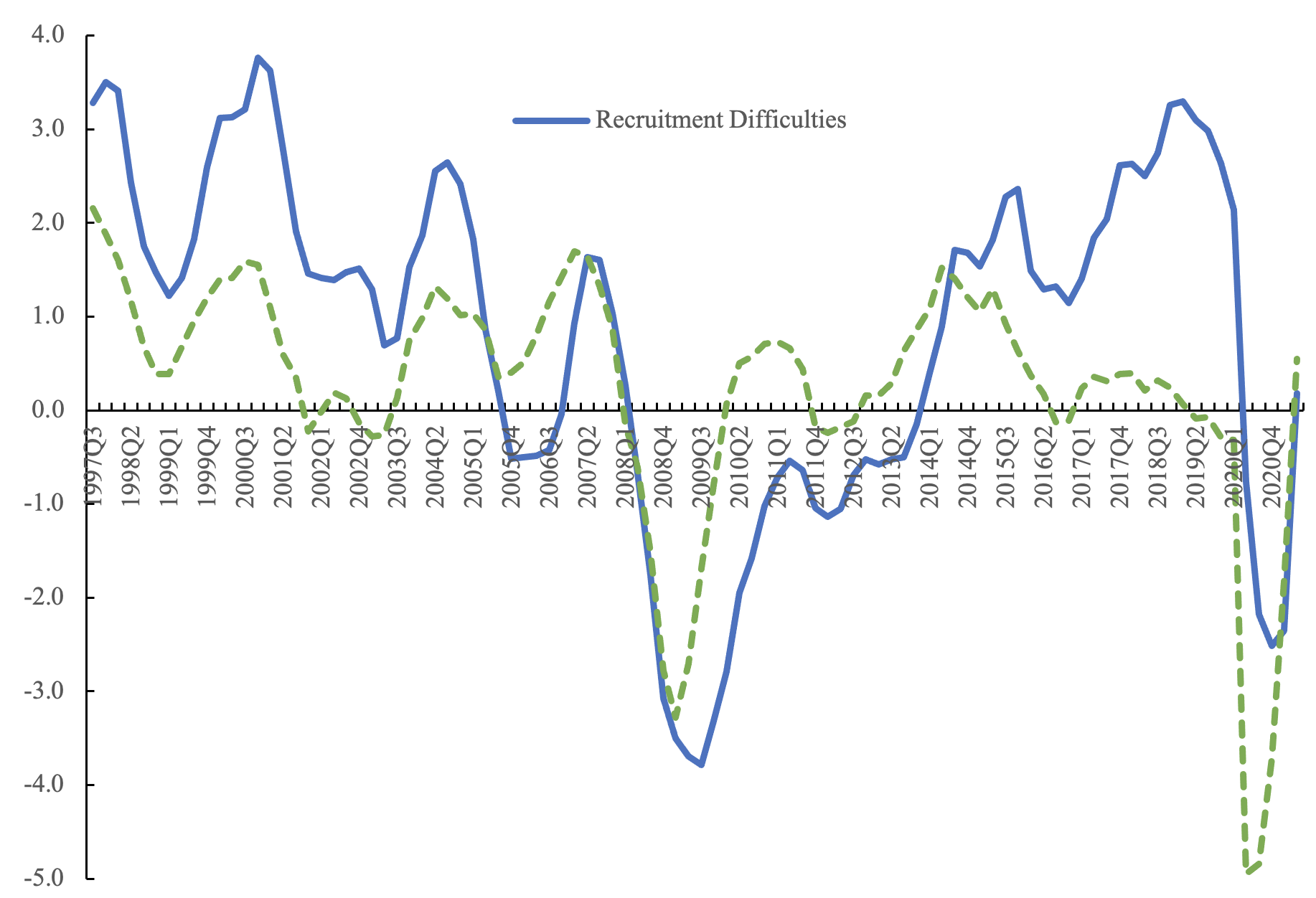 Economists should harness the information available in these surveys to predict economic downturns and, in particular, rising unemployment and slowing output.  Qualitative surveys gave a very early indication of the coming of the Great Recession in the US and the same patterns spread around the world, if commentators had only been watching.  The surveys also showed early signs of slowing from around 2017, even though central banks were suggesting that full employment was at hand.  GDP growth in Europe, and especially in Germany, slowed in 2018 and 2019 versus 2017.

If one goes back further and considers recessions in the post-War period, they come in various guises.  All entail loss of output but the precise nature of the unemployment response depends somewhat on endogenous policy response. ‘Nowcasting’, which predicts unemployment in real time, cannot estimate GDP change due to measurement problems in estimating GDP, which result in series revisions such that we do not always know when the turning point has come until late in the day.  Thus, we tend to focus on predicting unemployment. However, that may not be a perfect metric for capturing business cycle turning points if the state acts as it did in Europe during COVID.  However, in Blanchflower and Bryson (2021) we indicate that fear of unemployment predicts both – that is, it can predict the real GDP change (post revisions) and unemployment change.  We know, therefore, that things are getting bad when the fear numbers turn seriously negative in consecutive months.  It is this – the turning point in fear of unemployment – that should really be the focus of our modelling efforts if we are to predict turning points in the business cycle.

The potential for further forecasting research using these kinds of data seems high.