Yves here. In about five years, climate change has gone from still having loud denialists to being accepted by all but total cranks, yet policy responses have barely budged. I suspect the near-term human costs won’t be heatstroke in the Mediterranean, but rising levels of water scarcity and starvation due to skimpy harvests. 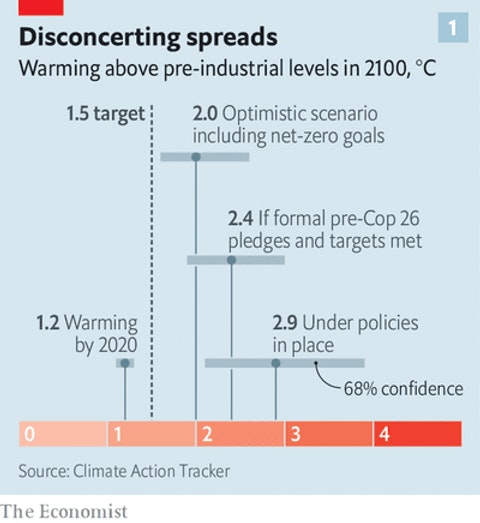 Global warming of 3°C is almost guaranteed before the end of this century “under policies in place.” What’s happening on the ground is less than half of what’s in store for the youngest of those alive today.

Even The Economist has noticed that the ravages of climate change are coming to this generation, not the next one:

Three degrees of global warming is quite plausible and truly disastrous

BY THE STANDARDS of the 21st century as a whole, 2021 will almost certainly go down as a comparatively cool year. By the standards of the rest of human history its weather looks disconcertingly like hell.

On July 20th, as Belgium, Germany, the Netherlands and Switzerland were still coming to terms with the fact that a stationary system of storms had turned entire towns into rivers and shredded the surrounding countryside, hundreds of thousands of people in the Chinese province of Henan were evacuated in the face of floods of their own; the city of Zhengzhou saw a year’s worth of rain in three days.

Also on July 20th Cizre, in Turkey, saw a temperature of 49.1°C (120°F), the highest ever recorded in the country. There has been barely any respite from searingly hot conditions along the northern Pacific coast of North America since the region was hit by an unprecedented heatwave two weeks ago, and already the region is bracing for another. Other places at high latitudes have been seeing similar—if less destructive—anomalies. In the first half of the month Finland experienced its longest heatwave for at least 60 years, with temperatures rising to the low 30°Cs in Lapland. On July 14th the country tossed and turned through its hottest night ever: two weather stations recorded temperatures no lower than 24.2°C.

On July 11th, a National Weather Service thermometer at Furnace Creek in Death Valley recorded a temperature of 54°C [that’s 129°F]. If confirmed by the World Meteorological Organisation (WMO), that would tie a reading taken at the same location last year for the hottest formally recognised daytime temperature ever. On July 19th more than 40% of the Greenland ice cap had meltwater on it. The amount of sea-ice cover in the Arctic was as low as it was at the same point in 2012, which saw the lowest summer sea ice ever recorded.

This is what Earth looks like when, according to the latest data from the WMO, it is 1.1-1.3°C warmer than it was before the steam engine was invented. [emphasis added]

It’s fair to say that what we’ve seen this year will happen almost every year going forward — plus it will get worse. Note that Death Valley reached its all-time record — 54°C or 129°F — in both of the last two years.

Almost everyone alive today will see summers with no Arctic ice. That day is not far off. Almost everyone born today will see winters with no Arctic ice. Destruction of the white expanse of Arctic ice, which reflects solar energy back into space before it’s converted to heat — consider the difference between a white surface and a black surface on a bright day — is one of many accelerants our species is pouring with abandon onto the fire of our own demise.

It’s clear the editors of The Economists (this was an unsigned, editor-written piece) fully understand that the planet will soon be largely uninhabitable by our species, and in this century. They understand, for example, that while “‘tropical’ nights where temperatures remain above 20°C from dusk till dawn are … mostly the preserve of the Mediterranean shoreline” today, in a 3°C-warming world “they became a regular occurrence in the Baltics,” adding that it’s “the lack of enough cooling at night which, by and large, drives deaths during heatwaves.”

Deaths from heatwaves in the Baltic Sea region. Consider what that means.

If Estonians start dying from the heat, how many global others will already have died? In tropic and semi-tropic regions, high humidity will make working outdoors a form of execution. Where will those billions of souls, many of them in south Asia, go to escape? Do you think they will be welcome as they flee north?

Do you think we’ll be welcome in Canada when we flee north?

The Story Isn’t the Climate, But the Reaction to It

[T]he longer it takes to cut emissions, the more avoiding 3°C becomes something only achievable through the application of untested and in some cases troubling technologies designed either to suck carbon from the atmosphere in vast amounts or to throw some of the sun’s warming rays back into space. Humanity would find itself wedged between a geoengineered rock and a very hot place.

That leaves us exactly nowhere.

We’re nowhere near to cutting emissions by design. The greatest cuts to emissions in this century are due to (heavily lamented) limits to economic growth cause by accidental crises — acts of God, if you will, like the Great Banking Bust of 2008 and the coronavirus pandemic of the last two years, both of which most readers would gladly have foregone.

Yet this is the Economist, a bastion of rightthink for bankers and Western global leaders, the kind of people who go to Davos each year to design our future for us — and for themselves.

Where is the editors’ admonition to do something before the Economist‘s own readers take the planet where no man or woman, living or unborn, can ever follow?

Where’s the moral rejection, the shaming and the shunning, of the greed of its richest readers, a lust for money that will truncate the natural lives of most living souls, save only the geriatric few like Charles Koch?

(Though I fervently wish him the opposite, Koch will probably die long before his sins can be visited on him. Live long, Charles Koch. I don’t trust the afterlife to serve you the treat you deserve.)

It’s as if the Economist has decided to point out the soon-to-come wreck of the ship it’s sailing on, while neither getting off nor working its best to change course. 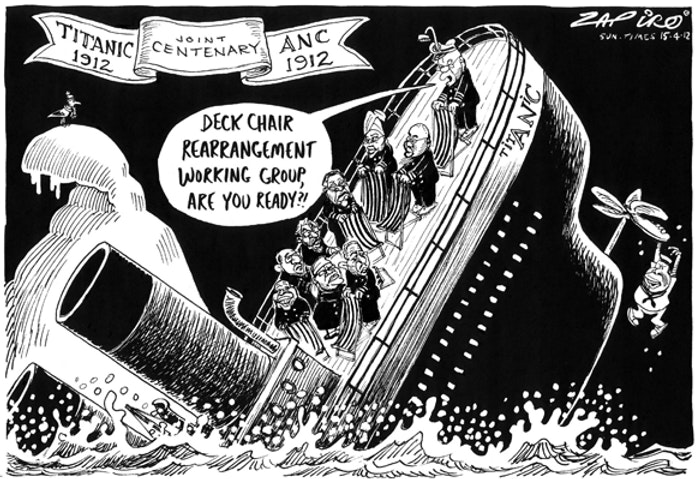 And that’s the reason we’re stuck where we are today. No one with real power wants to stop the wreck that even they know is coming. They’re content just to talk about it.

As to why this is true, that’s the subject of another piece ­— several in fact. Stay tuned for more.