Yves here. This story serves to illustrate the incoherence of US policy, or more accurately, the incoherence of policies designed to pretend that addressing climate change is a no-pain proposition. We can either reduce energy use radically, which means lowering consumption (and war-making), or in short order, we’ll have lots of disruptions and shortages due to fires, floods, extreme storms, and lower harvests. So the US ought to welcome higher oil prices as a crude (no pun intended) carbon tax. But that would represent a 180. Suburban sprawl, extended supply chains, and our new normal of home deliveries all depend on cheap energy.

Needless to say, there’s even more of a disconnect in the Biden infrastructure bill, with the sops to oil and gas industry incumbents belying “Green New Deal”/Paris Accord posturing.

I’m old enough to remember that during the 1970s oil crisis, there were many efforts to cut energy use, from every other day gas access (depending on whether your license plate ended in an odd or even number), corporations generally following the exhortation to set summer thermometers at 77, and more use of ride-sharing (the grassroots kind). Warren Mosler has a persuasive analysis that shows that inflation started to fall in 1979 just after oil prices peaked; his charts make the case that the Fed driving interest rates to the moon and the resulting steep recession were unnecessary save to further weaken labor bargaining power. As we wrote in 2019:

Some experts, such as Warren Mosler, point out that the underlying inflationary trends were dissipating even before Volcker launched his money jihad, as shown by oil prices peaking in 1979. Recall that Volcker became Fed chairman in 1979 and started implementing the “Volcker shock” of constraining money supply in March 1980. Thus there is a case to be made that inflation would have abated, particularly since the key practice that had helped reinforce it, widespread formal and informal cost of living adjustments, had been abandoned or weakened.

High energy prices aren’t just unpopular, they are destabilizing. Economists have argued that gas at the pump rising to over $4.00 a gallon was a trigger for the financial crisis.1 In a similar vein, a persuasive analysis by Normura showed that the countries that had Arab Spring uprisings also had a high percentage of their populations unable to support themselves due to recent increases in food and fuel costs. The Gillet Jaunes protests were triggered by planned energy taxes; the protestors were low wage workers in rural areas particularly exposed due to being truckers/drivers or having long commutes by car.

Angolosphere economies, with their neoliberal “hate the poors” reflexes, are terrible at delivering relief to low income households, which is one way to distribute the burden of higher oil costs more equitably. Not only do we seem unable even to devise and implement such programs, but on the rare occasions when they get done, they rarely hand out dough quickly, and they are often burdened with elaborate means-testing.

President Joe Biden has lately sought to soothe fears that rising inflation could hurt the U.S. recovery and undermine his $4-trillion spending plans. This comes after U.S. inflation for the month of June accelerated to the fastest clip since 2008, as the economy continues to recover following the Covid-19 related lockdowns. According to the Labor Department, the consumer price index (CPI) climbed 5.4% Y/Y in the month of June. That’s about twice the average rate over the past decade. Biden has something else to worry about: Rising oil prices.

The administration will feel a little jittery about high oil and gasoline prices because of the risk they pose to Democrats’ future political ambitions. It’s a well-known fact that gas prices have an outsized impact on the consumer psyche. Gas prices currently sit at $3.18 per gallon nationally, a full dollar higher than prices last year.

Indeed, this is not lost on Republicans, who have seized the moment andblame Biden for rising gas prices.

Investors should, however, worry about rising oil prices not only because of the role that oil has historically played in dictating inflation trends but also because Wall Street is no longer enthusiastic about oil and gas stocks–which could, ironically, lead to even higher inflation.

Oil prices and inflation are connected in a cause-and-effect relationship. As oil prices climb, inflation tends to follow in the same direction higher. On the other hand, inflation tends to fall in tandem with falling oil prices. That’s the case because oil is a major input in the economy, and if input costs rise, so should the cost of end products.

Though less frequently discussed seriously compared to Peak Oil Demand, Peak Oil Supply remains a distinct possibility over the next couple of years, mainly due to serious underinvestments in oil and gas.

In the past, supply-side “peak oil” theories mostly turned out to be wrong mainly because their proponents invariably underestimated the enormity of yet-to-be-discovered resources. In more recent years, demand-side “peak oil” theory has always managed to overestimate the ability of renewable energy sources and electric vehicles to displace fossil fuels.

Then, of course, few could have foretold the explosive growth of U.S. shale that added 13 million barrels per day to global supply from just 1-2 million b/d in the space of just a decade.

It’s ironic that the shale crisis is likely to be responsible for triggering Peak Oil Supply.

In an excellent op/ed, vice chairman of IHS Markit Dan Yergin observes that it’s almost inevitable that shale output will go in reverse and decline thanks to drastic cutbacks in investment and only later recover at a slow pace. Shale oil wells decline at an exceptionally fast clip and therefore require constant drilling to replenish the lost supply.

Indeed, Norway-based energy consultancy Rystad Energy recently warned that Big Oil could see its proven reserves run out in less than 15 years, thanks to produced volumes not being fully replaced with new discoveries.

According to Rystad, proven oil and gas reserves by the so-called Big Oil companies, namely ExxonMobil, BP Plc. (NYSE:BP), Shell (NYSE:RDS.A),Chevron (NYSE:CVX), Total (NYSE:TOT), and Eni S.p.A (NYSE:E) are all falling, as produced volumes are not being fully replaced with new discoveries. 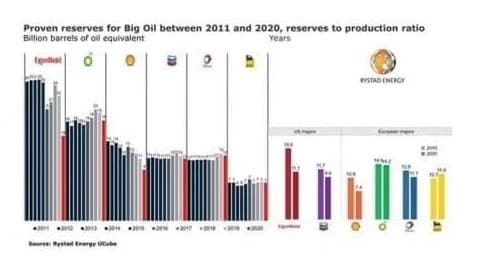 Global oil and gas companies cut their capex by a staggering 34% in 2020 in response to shrinking demand and investors growing weary of persistently poor returns by the sector.

The trend shows no signs of moderating: First quarter discoveries totaled 1.2 billion boe, the lowest in 7 years with successful wildcats only yielding modest-sized finds as per Rystad.

ExxonMobil, whose proven reserves shrank by 7 billion boe in 2020, or 30%, from 2019 levels, was the worst hit after major reductions in Canadian oil sands and US shale gas properties.

Yet, policy changes by Biden’s administration, as well as fever-pitch climate activism, are likely to make it really hard for Big Oil to go back to its trigger-happy drilling days, meaning U.S. shale could really struggle to return to its halcyon days.

Clark Williams-Derry, energy finance analyst at the Institute for Energy Economics and Financial Analysis (IEEFA) has warned that there’s a “tremendous degree” of investor skepticism regarding the business models of oil and gas firms, thanks to the deepening climate crisis and the urgent need to pivot away from fossil fuels. Indeed, Williams-Derry says the market kind of likes it when oil companies shrink and aren’t going all out into new production but instead use the extra cash generated from improved commodity prices to pay down debt and reward investors.

Unfortunately, this trend is very likely to lead to a major oil supply squeeze down the line, high oil prices, and high inflation.

1 We beg to differ since the subprime market started going into crisis in late 2006 and the first three acute phases happened before the oil/gas price spike. Chapter 9 of ECONNED explains in detail why the crisis was a derivatives crisis; a mere housing crisis would not have nearly wiped out the financial system.