Yves here. This post is consistent with my gut reaction that China’s Evergrande crisis will be a savings & loan level crisis, as opposed to a systemic event. However, thanks to the passage of time, Americans have forgotten how nasty the S&L crisis was. Citibank nearly went under, thanks to having made too many junior loans to what turned out to be “see through” commercial developments in Texas.

Similarly, the 1991-1992 recession was nasty, but banks and the economy recovered faster than most economists expected (and remember “most economists” have an optimistic bias). A big reason was that Greenspan engineered a steep yield curve by driving short rates low but not seeking to intervene in the long end. That enabled banks to rebuild their balance sheets quickly through dumb “borrow short/lend long” strategies.

The big contribution is in documenting the scary size of China’s real estate activities.

By Kenneth Rogoff, Thomas D. Cabot Professor of Public Policy and Professor of Economics at Harvard. Originally published at VoxEU

The Chinese economy was able to sharply rebound from the Covid pandemic, helping to sustain a housing boom. The country faces a multitude of challenges over the medium term, however, on top of the much more virulent Delta variant. This column argues that the footprint of China’s real estate sector has become so large – with real estate production and property services accounting for 29% of the country’s GDP – that absorbing a significant housing slowdown would significantly impact overall growth, even absent a financial crisis.

In our recent research paper (Rogoff and Yang 2021), my co-author Yuanchen Yang and I argue that the footprint of China’s real estate sector has become so large that absorbing a significant housing slowdown would significantly impact overall growth, even setting aside the usual (elsewhere) amplification effects from financial sector fragilities (Reinhart and Rogoff 2009).  With real estate production and property services accounting for 29% of GDP – rivalling Ireland and Spain at their pre-financial crisis peaks – it is hard to see how a significant slowdown in the Chinese economy can be avoided even if banking problems were contained.

Of course, the Chinese authorities exert enormous leverage over the housing market, and have in the past used an array of tools to alternately tighten and stimulate the market.  But the issue is not just maintaining stability but also maintaining the scale of production and employment. The fact that the square feet of housing per capita in China already rivals that of much richer economies such as Germany and France (see Figure 1) is sobering.  Even acknowledging that the average construction quality in China is lower so that there is room to upgrade, this suggests that the current size of the real estate sector, relative to GDP, cannot easily be maintained.

Figure 1 Average residential space per person by country in 2017 (sq.ft.) 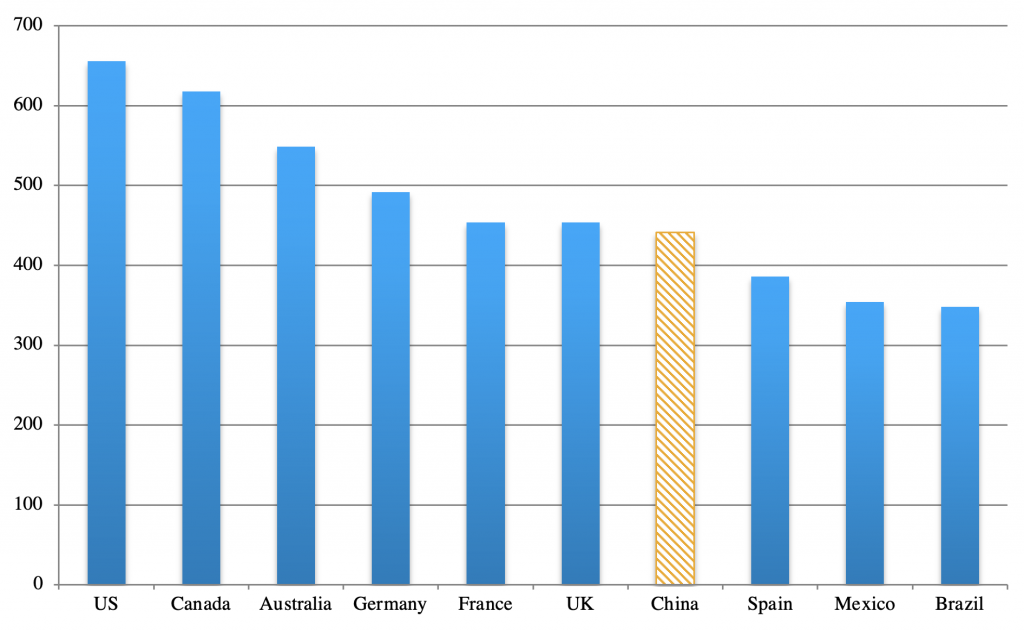 Up until now, China seems to have brushed aside growth and real estate concerns.  With its Covid-zero approach, the Chinese economy was able to sharply rebound from the pandemic, growing at over 8% in 2020 and over 12% in the first half of 2021.  As elsewhere, housing price growth has been strong.  Nevertheless, as China adjusts to dealing with the much more virulent Delta strain, growth is slowing sharply.  Over the medium term, China faces a multitude of challenges, ranging from extremely adverse demographics to slowing productivity, not to mention environmental degradation, water shortages, and dealing with inequality.  Until now, the housing boom has been sustained by a broad economic boom that now faces steep headwinds.

To arrive at our 29% estimate for the share of China’s real estate sector, broadly construed to include both physical construction and property related services, we make use of China’s most recent (2017) input-output matrix (published in mid-2019), including not only first-order effects but higher-order interactions as a real estate shock reverberates throughout the economy. (Taking into account the external sector slightly lowers the share but does not fundamentally change the message.)

Figure 2 uses a similar measure to construct the share of real estate in advanced economies, and plots these alongside China. As the figure illustrates, China is even more dependent on housing construction than Ireland and Spain were prior to the global financial crisis, and far more dependent than the US was at the peak in 2005. 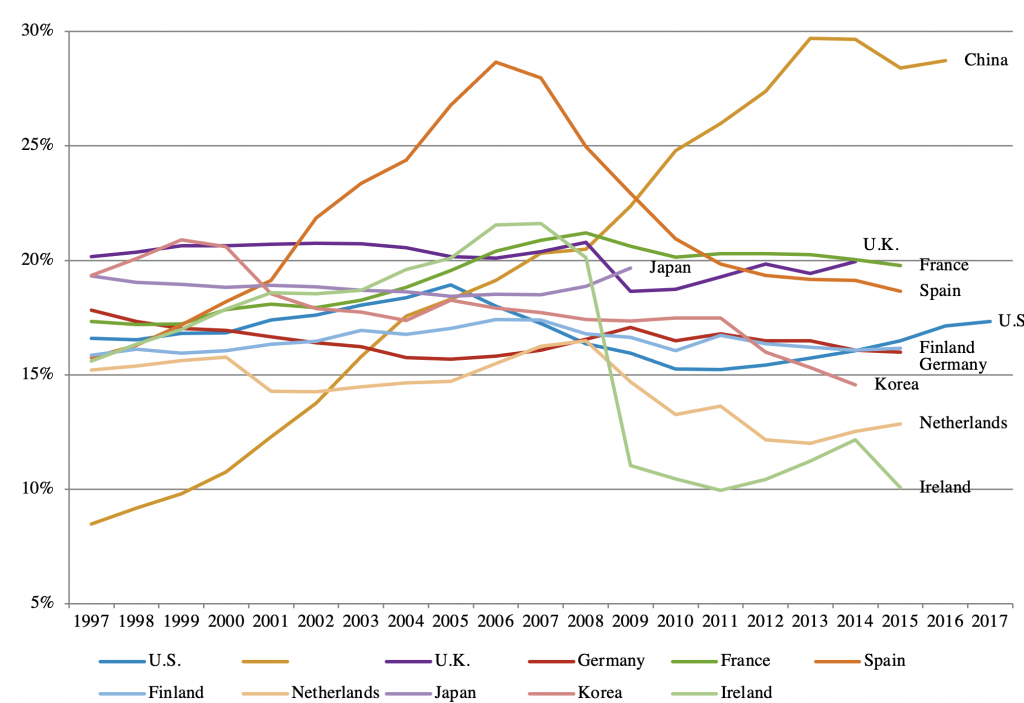 While it is important to emphasise that housing price data are difficult to collect and standardise, comparisons of China with other countries are nevertheless quite dramatic.  Indeed, by international standards, the breath-taking scale of China’s real estate price boom is unprecedented for a major economy.  Figure 3, based on pre-pandemic data, shows that the home price to income ratios1 in Beijing, Shanghai, Shenzhen, and Guangzhou are comparable to any of the world’s most expensive cities. The price-to-income ratios in Beijing, Shanghai and Shenzhen exceed a multiple of 40, compared to 22 in London and 12 in New York.2 Of course, such price-to-income ratios might be justified if one expects China’s spectacular growth record of the past three decades to continue indefinitely. But as we have already argued, the long-term risks posed by ageing, a shrinking technological gap with the West, and a general global slowdown in productivity,make it likely that growth will continue trending downwards, even after the economy recovers from the latest wave of the pandemic. 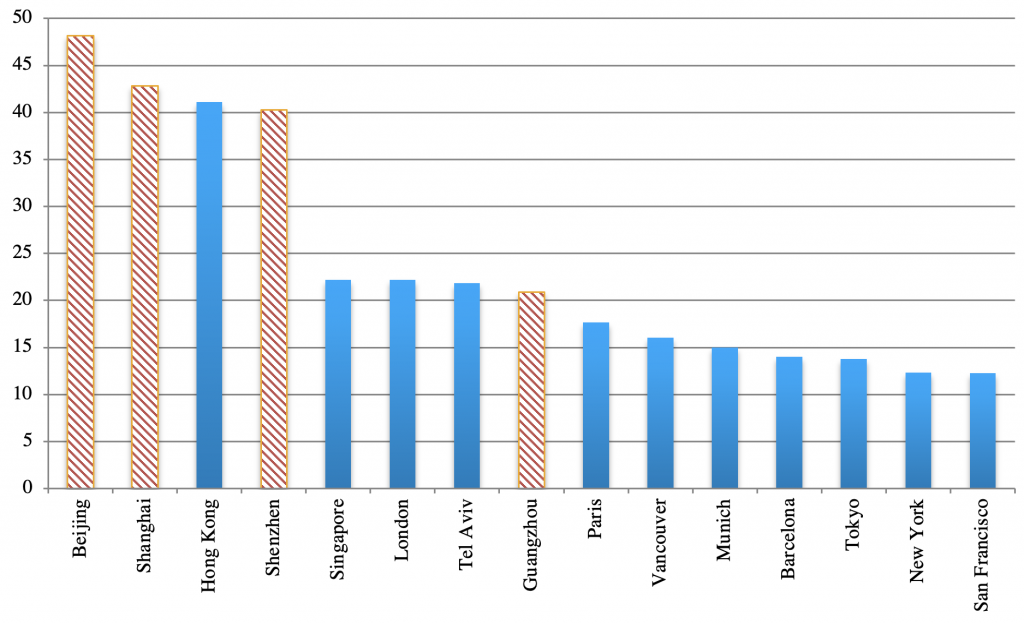 We acknowledge that a number of previous authors have explored the potential risks in China’s housing market, with leading examples including Fang et al. (2015), Chivakul et al. (2015), Glaeser et al. (2017), and Koss and Shi (2018).  Although there is a range of opinion (see especially Gyourko et al. 2010), the general consensus has been that although China’s housing price appreciation is literally an order of magnitude greater than the US experienced in the run-up to its 2008 financial crisis, it is not necessarily a bubble and it would take a sharp, sustained economic slowdown in overall economic growth to generate a long-lasting housing recession.

However, these studies are based on data which are now somewhat out of date in the landscape of the rapidly evolving Chinese economy. In Rogoff and Yang (2020), we make use of newly available sources, especially taking advantage of the digitisation of China’s statistics that has helped provide both more extensive and more accurate data, to extend and significantly update the earlier work.  And, of course, the Covid-19 pandemic, particularly as new mutations evolve, poses a very real risk that the catalyst for a sustained growth slowdown could be at hand.

My 2021 paper with Yang focuses on the importance of real estate for growth and employment, but of course the financial vulnerabilities are also a great concern, even if China proves much more adept at debt workouts than Western governments managed after 2008, as many observers anticipate. Nevertheless, the looming bankruptcy of the Chinese real estate developer Evergrande, with over $300 billion in debt,3 will be by far the largest the government has had to deal with, and weaker real estate firms are facing challenges rolling over their debts.  Gao et al. (2020) discuss for the case of the United States in the early 2000s, housing speculation in the run-up to a crisis can considerably aggravate real effects of the eventual collapse. While the Chinese authorities have long made periodic efforts to contain speculation, this has been immensely difficult in the face its epic, decades-long housing price boom, as Wei (2017) emphasises.

The challenge of rebalancing the economy away from real estate production and services is a problem China will have to face in the coming years, perhaps sooner rather than later.