It has been argued that increased uncertainty can worsen unemployment if employers prefer to wait and postpone job creation. However, under the dominant theory of unemployment – the search-and-matching model – the value of waiting plays no role. This column proposes an amended model which relaxes some of the theoretical assumptions, and shows that an increase in perceived uncertainty does indeed increase the value of waiting, thus reducing job creation.

There is convincing empirical evidence demonstrating that elevated uncertainty increases unemployment.1 The Covid-induced spike in uncertainty (Baker et al. 2020) and rising unemployment in many countries reinforce the importance of understanding exactly how uncertainty shapes labour market outcomes. One prominent transmission channel that economic research has highlighted relates to the option value of postponing investment. After an increase in uncertainty, firms may prefer to ‘wait and see’ instead of engaging in activities that are not easily reversed (Bernanke 1983). Since job creation is very much like an irreversible investment (with job creation costs being non-refundable), the option-value channel seems like a plausible mechanism to rationalise the effects of uncertainty on unemployment. Indeed, this conjecture has been put forward in the context of frictional labour markets (Leduc and Liu 2016).

In a recent paper, we examine this option-value hypothesis through the lens of theoretical search-and-matching (SaM) models of the labour market (Den Haan et al. 2021).2 We first demonstrate that in the standard SaM model, option-value considerations do not, in fact, play any role – even though investments in jobs are irreversible and even if creating jobs prohibits investors from creating additional jobs in the future (mutual exclusivity). The culprit is the standard free-entry assumption, which states that a sufficiently large mass of potential entrepreneurs drives the expected profits of creating a job to zero. We propose an amended model that relaxes this free-entry assumption as well as allowing for heterogeneity in firm-specific productivity. In this new SaM model, the mere anticipation of greater future volatility does indeed robustly increase the option value of waiting and reduce job creation.

Our starting point is the canonical SaM framework. This model – arguably the dominant theory of unemployment – describes the evolution of unemployment as resulting from the relative number of job losses and newly created matches. The latter are formed by vacancy-posting entrepreneurs on one side, and job-seeking unemployed workers on the other side of the matching market. Workers are more likely to find a new job if there are more open vacancies relative to searching workers. The converse holds for firms’ probability of filling a vacancy. In marked contrast to theories in which labour demand and supply clear on a spot market, employment relationships are realistically modelled as long-lived but subject to the possibility of separation. A vacancy is posted if and when the discounted sum of expected future profits is large enough to compensate for the fixed cost of posting a vacancy (and other costs associated with creating the job). The long-horizon valuation of matches between entrepreneur and worker, and the associated forward-looking vacancy-posting decisions, make this model particularly relevant when analysing the effects of increased uncertainty about future profitability. For transparency, we assume that everyone is risk neutral, since option-value considerations do not hinge on risk aversion (Bernanke 1983).

In the context of such a model, Leduc and Liu (2016) formulate the option-value hypothesis as follows:

“Facing higher uncertainty, the option value of waiting increases and the expected value of a job match decreases, inducing firms to post fewer vacancies, making it harder for unemployed workers to find jobs, and ultimately raising the equilibrium unemployment rate […] Firms refrain from hiring since the possibility of a bad hiring decision may have long-lasting negative consequences ex post.”

As mentioned above, however, no option-value channel of uncertainty exists in the standard SaM model. The usual free-entry assumption ensures that expected profits are driven to zero in each and every period. Whether uncertainty is muted or elevated, there are no better times worth waiting for.3

Search-and-Matching Model with a Limited Number of Heterogeneous Entrepreneurs

We do not believe that the popular assumption that there is a ‘potentially infinite number’ of identical entrepreneurs nor the implication that expected profits from entry are equal to zero are realistic. Moreover, this assumption and its implication are not innocuous. Specifically, we show that by relaxing this assumption, we can reconcile intuition and theory. That is, the irreversibility of job creation of the SaM framework and mutual exclusivity of current and future job creation does now generate a ‘wait and see’ option-value mechanism.

To this end, we make two modifications to the SaM model: the available number of potential entrepreneurs is not infinite but limited; and there is heterogeneity in firm-specific productivity. Specifically, suppose that in every period, any unmatched entrepreneur receives a productivity draw from a fixed distribution. This draw will be permanent for the duration of a match. If the entrepreneur decides not to post a vacancy at the given level of productivity, she remains unmatched and makes a new draw in the next period. In this environment, there is a time-varying measure of entrepreneurs (namely those with a sufficiently high productivity draw) that expect to make strictly positive profits from posting a vacancy and (only) those will enter the matching market.

The resulting SaM model robustly predicts that increased uncertainty leads to a postponement of job creation. Importantly, this argument holds not only for increased volatility of idiosyncratic productivity shocks. It also applies with respect to macroeconomic (or aggregate) uncertainty. The essential reason for the existence of an option-value of waiting channel in this model is as follows. An expected increase in future volatility improves an unmatched entrepreneur’s chance of having a productivity draw for which expected profits of vacancy-posting are positive. By contrast, the downside risk is not affected since entrepreneurs can always choose to stay out of the market. This convexity in the payoff from vacancy-creation is responsible for the presence of an option-value channel.

We illustrate this logic in a two-period version of our model. Profitability of a match is affected by a mean-zero idiosyncratic component, a, and an aggregate component. Specifically, if an investor with productivity draw, a, creates a job in period 1, then her period-1 profits will be equal to 1+a and her period-2 profits will be equal to either 1+a-Δ or 1+a+Δ which occur with equal probability. Note that the expected profits of investing in period 1 do not depend on the value of Δ (that is, on the amount of aggregate uncertainty). For simplicity, we assume first that the probability with which a vacancy turns into a productive job, h, is fixed and does not depend on the aggregate state.

What happens with the value of waiting when we introduce aggregate uncertainty, that is, when Δ>0? The dark shaded area in panel (a) indicates the increase in expected profits when aggregate productivity is high relative to the baseline. The light shaded area indicates the analogous decrease when aggregate productivity is instead low. In a time of high overall productivity, the level of idiosyncratic productivity needed to cover vacancy posting costs is lower, so that the probability of having such a draw is higher. The opposite is true in times of low aggregate productivity, but the decrease in expected profits is lower because entrepreneurs with low draws avoid entering altogether and, instead, make zero profits. When uncertainty is elevated, expected period-2 profits increase, which implies that the value of waiting increases. Accordingly, the period-1 cut-off value of idiosyncratic productivity above which an entrepreneur is willing to post a vacancy in period-1 is higher. That is, as Δ increases, more entrepreneurs choose to postpone investing into vacancy creation – they wait.

The lower row of panels illustrates what happens when the hiring rate is endogenously determined in the matching market. Because the probability of a vacancy turning into a productive job is lower in good times, and the opposite is true in bad times, expected movements in the hiring rate mute the option-value mechanism. But they do not eliminate it. 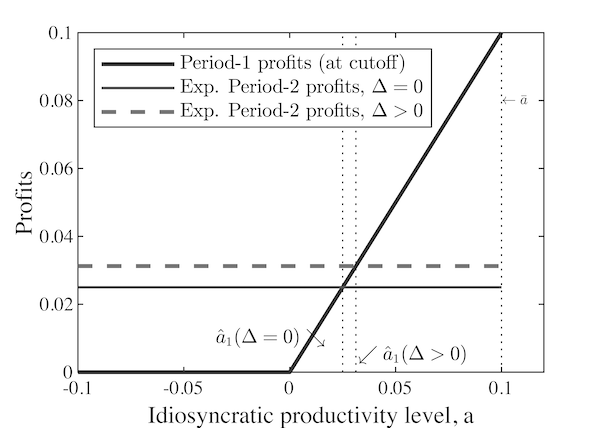 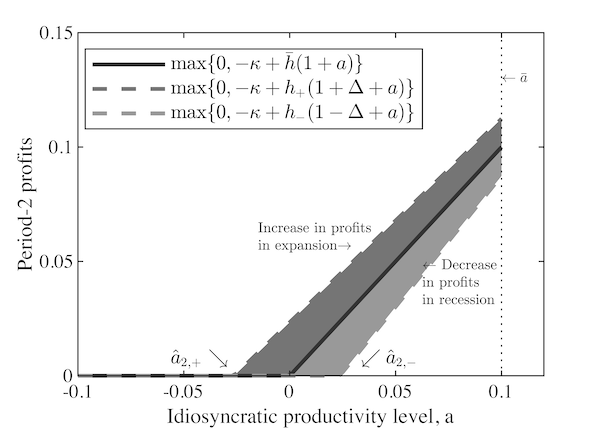 Notes: The figure shows how uncertainty gives rise to an option value of waiting in the two-period model with a finite mass of entrepreneurs and firm-specific productivity. In terms of notation, a denotes idiosyncratic productivity, κ is the fixed vacancy-posting cost, h the hiring probability, and Δ a measure of aggregate uncertainty. In the upper row, the hiring probability is fixed, whereas in the lower row that rate varies according to a standard matching function. For details, see Online Appendix B of Den Haan et al. (2021).

While this column has focused on intuition and qualitative reasoning, our paper provides a quantitative analysis of the proposed SaM model and the embedded option-value of waiting.4 The fundamental insight is that in such a model, featuring a limited number of entrepreneurs who differ in their idiosyncratic productivity levels, elevated uncertainty robustly raises unemployment, because it incentivises potential employers to postpone job creation.

The standard free-entry assumption is likely to be important for other predictions of SaM models. For example, it implies that the outside option for entrepreneurs is equal to zero, which affects wage bargaining, which in turn is important for employment determination. We find it implausible that workers typically have a powerful relative bargaining position of this kind. So, despite its popularity, it is perhaps time to drop this free-entry assumption altogether.