Yves here. An old economists’ saying: “If you must forecast, forecast often.” So feel free to take this prognostication with a fistful of salt. Nevertheless, your humble blogger believe, and less gloom and doom oriented correspondents similarly intuit that if Biden doesn’t get a pretty big spending bill passed, the economy will start to sputter. The floundering around getting his ever-shrinking package passed is frazzling the Confidence Fairy.

And what happens if the US suffers a winter Covid surge? That would represent not just a direct hit to the economy (presumably a pullback on travel, going to restaurants and bars; with reduced hospital capacity, lockdowns are possible) but a further blow to confidence. Serious Covid outbreaks would show that the officialdom was again unable to contain the disease….and might finally shatter the undue reverence for the vaccines.

Economic downturns are not as unpredictable as we once thought. There is mounting evidence that the expectations of consumers, workers and employers predict economic downturns, sometimes 12 to 18 months ahead. But we live in exceptional times. The COVID-19 pandemic and its aftermath have sown doubt and uncertainty among consumers and producers and may do so for some time to come. So what’s the economic prognosis? this column argues that expectations data for the US suggest the country is entering recession about now.

With the mass rollout of COVID-19 vaccinations and the attendant decline in COVID-related deaths in most advanced economies, and with many economic indices turning positive, it looks like most economies are on the road to recovery although the data paint a confusing picture.

For example, in the spring of 2020, wage growth jumped sharply at the same time unemployment was rising. This was in both the US and the UK. Since then, unemployment has been falling while wage growth remains high. This implies the wage curve slopes up, which seems unlikely. But other metrics are telling a different story, most notably those capturing consumer and business sentiment.

Two series – from The Conference Board on business conditions, employment and income six months hence, and from the University of Michigan on the financial situation in a year and business conditions a year and five years hence – tell the same story: sentiment peaked in spring or early summer. And it has been falling precipitously since (Blanchflower and Bryson 2021a). This is true for the US as a whole and for the eight largest states for which The Conference Board collect data.

Why does this matter? Well, the rate of decline in these sentiment indices is of the same magnitude we saw back in 2007, before the Great Recession (Blanchflower and Bryson 2021b,c). We call it the 10-point rule. When the indices drop by at least 10 points, this is an early warning signal for a recession.

We test this proposition for the US over the period 1978 to September 2021 and show that consumer expectations about future economic trends are highly predictive of economic downturns 6-18 months ahead, thus providing an early-warning system for the economy (Blanchflower and Bryson 2021a).

Table 1 The Conference Board expectations data in the eight biggest US states, 2007 and 2021

The first row of the table shows the drop in The Conference Board expectations data in the eight biggest states from the spring peak in 2007 to December 2007, the date called by the NBER Business Cycle Dating Committee as the start of the Great Recession.

The second row reports the falls in 2021 from the spring peaks to September 2021.

These aren’t the only data flashing red. The US PMI New Orders data are also trending down as Figure 1 shows for four consumer facing sectors. 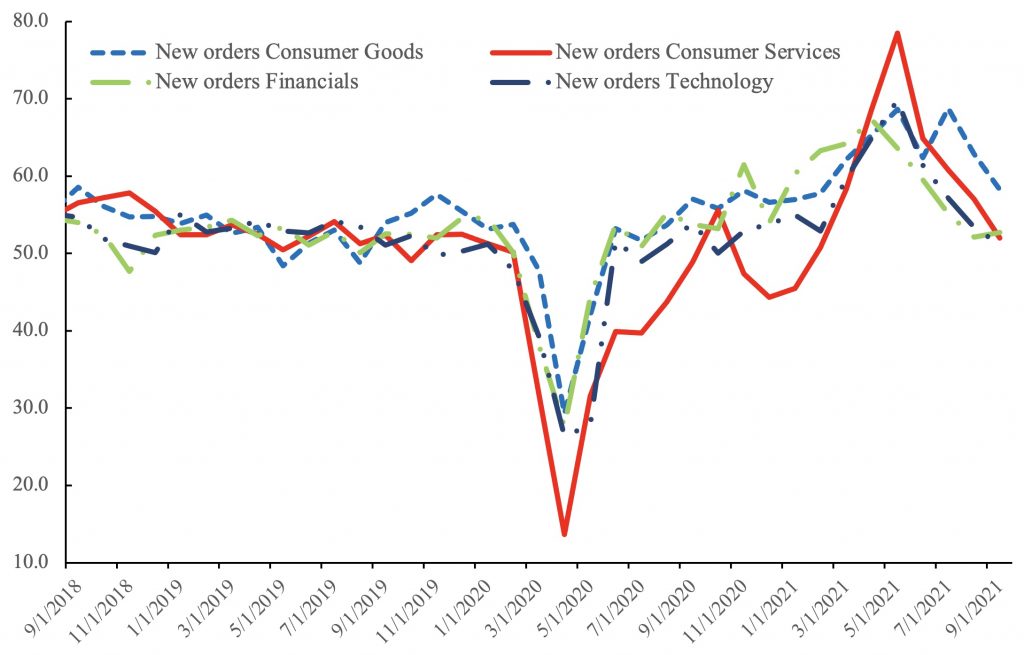 On the other hand, if a recession were imminent, we would expect to see an increase in the unemployment rate – our rule of thumb is a 0.3 percentage point upturn in consecutive months – and declining employment. This is not what is happening.

That’s because the economic situation in 2021 is exceptional. Unprecedented direct government intervention in the labour market through furlough-type arrangements has enabled employment rates and unemployment rates to recover quickly from the huge downturn in 2020.

So, what is going on? The answer appears to lie in the exceptional nature of the COVID-19-induced shock to the economy. It has been both an economic shock and a health shock, and one with the potential to derail the economy again over the coming months. In spite of improvements in traditional labour market indicators, declining consumer expectations about the future of the economy are likely linked to COVID-19-related fears and anxieties.

This is borne out by a recent The Conference Board survey indicating that 42% of workers are worried about returning to the workplace for fear of contracting COVID-19, a substantial increase from June 2021 when only 24% expressed this concern (The Conference Board 2021).

The increased level of anxiety among workers is potentially justified because, as we showed in a recent study analysing the US Census Bureau’s Household Pulse Survey, workers were substantially more likely to contract COVID-19 than non-workers, despite having a higher probability of being vaccinated (Blanchflower and Bryson 2021d). Being at work or commuting to it increases the risk of infection. Such concerns have been exacerbated by the appearance of the Delta variant of the virus.

We suspect that fears linked to COVID-19 will continue to affect the real economy and consumer expectations about an imminent economic downturn. This is a bold call not consistent with consensus; only time will tell if we are right. However, equivalent falls in these data in 2007 were an early indicator of recession, missed at the time by policymakers and economists.

It is possible that these data are giving a false steer. However, missing the declines in these variables in 2007 proved fatal. It is our hope such mistakes will not be repeated this time around. These qualitative data trends need to be taken seriously.