Yves here. It is never a good thing when someone who has neither run for office nor is/was a celebrity (that include athletes) has their likeness used to sell stuff. The once-mistakenly-sainted Robert Mueller is the classic example. The extent of Fauci merchandise says his fall is inevitable. And then we have the curious case of Ruth Bider Ginzburg, too familiarly RBG.

I’ve never been a huge fan. If RBG really cared about keeping a left-of-center or at least not right wing majority on the Supreme Court, she should have taken up Obama’s suggestion that she retire while the Democrats could assure the approval of a replacement, on the condition that she would approve of a very short list of candidates before she announced her retirement. 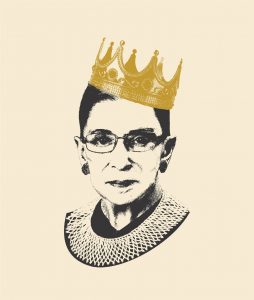 Katie Couric released a memoir this month. Although I personally can’t imagine reading it, much less buying it, there is at least one juicy tidbit. Remember when Colin Kaepernick kneeled? Of course you do. Here’s what deceased Supreme Court judge of nearly 30 years and unintentional mug/t-shirt/pillow persona Ruth Bader Ginsburg had to say about it:

“I think it’s dumb and disrespectful. I would have the same answer if you asked me about flag burning. I think it’s a terrible thing to do, but I wouldn’t lock a person up for doing it. I would point out how ridiculous it seems to me to do such an act.”

The person conducting that interview? Katie Couric. In her memoir, Curic reveals that Ginsburg, a progressive icon, had more to say. First, Ginsburg opined the kneeling athletes were displaying…

“…contempt for a government that has made it possible for their parents and grandparents to live a decent life.”

The players’ parents and grandparents, like Ginsburg, lived through Jim Crow, amongst other things. The then-83-years-old justice continued:

“…Which they probably could not have lived in the places they came from…as they became older, they realize that this was youthful folly. And that’s why education is important.”

Couric ended up not using the full interview because she was a “big RBG fan” and the words were “unworthy of a crusader for equality”.

Both sides of this are equally bananas. That a journalist would suppress newsworthy information from one of the most powerful people in the country in service of fandom is half of the bananas. Ginsburg already had a spokesperson, Couric’s services weren’t necessary. The other half of bananas is that a sitting Supreme Court justice who’s supposed to be a leading proponent for equality managed to somehow hold even more regressive and racist opinions.

The cherry on the bananas is RBG’s belief that education would remedy the situation, allowing the players to see the folly and ingratitude of their protests. I guess it depends which sort of education she’s referring to? Given her retrograde POV, perhaps she’s referring to her own? Save for the historical events that occurred in the years between her and I attending school, our historical educations probably weren’t all that different (I’m 36). Given the current debates about critical race theory, and our education system’s general reluctance to acknowledge the enduring effects of slavery on America, it’s unclear to me how education—without some very intentional omissions—would be the salve she thought it would.

With the above in mind, it felt like a good week to re-share my piece on Ginsburg from a while back. It’s below, uncut.

Finally, if you’re jonesing for even more of me, I wrote a long form piece on the economics of Hampster Dance for Tedium. It’s a very different topic. Still good though!

These days, I eat a lot of meals where I work. Thus, a daily allotment of silverware, plates, and glasses get used at my desk. Often, a coffee mug will linger on the desk long past its cupboard buddies. I’ll get up from my desk, pick up the used plates and silverware, look at the mug, acknowledge it needs to go to the sink then decline to do so, despite having a free hand. This can go on for days: I look at the task that needs to get done and put it off to chase the sliver of pleasure that comes from not doing a chore. Eventually, my twin desires for tidiness and the ability to go about my day knowing everything’s in order outweigh the fleeting feel-good of chore abstinence.

What’s Mug Got to do with it? (Tina Turner voice)

A few reports last week revealed that in 2013, fearing the senate would flip Republican in the 2014 election (it did) and block the appointment of a liberal judge, then President Barack Obama had a private lunch with Supreme Court Justice Ruth Bader Ginsburg to gingerly convince her to step down. Ideally, she’d do so in time for the senate to confirm a liberal replacement.

At the point of this conversation, Ginsburg was near 81.1 years of age, the average life expectancy of an American woman. She was also well past 66, the average age Americans expect to retire. When asked about how Obama might regard her potential retirement, she said:

“I think he would agree with me that it’s a question for my own good judgment.”

In a certain way, Ruth Bader Ginsburg’s Supreme Court seat resembles my mug. The issue of her passing away in the midst of a conservative-majority senate was obvious, and her stepping down midway through Obama’s second term was a simple solution to that problem that went ignored for too long. Ignored because it felt good to avoid doing anything about it. It felt good because she was an iconoclast, and the longer she sat in her seat, the more we could congratulate ourselves for having someone like her around in such a powerful position.

Unlike the mug, Ginsburg had agency, and chose to remain in her seat. As her career showed, she refused to be placed anywhere simply because someone wanted it that way.

Put an RBG on It

There’s a ton of merch out there with RBG’s face on it: mugs, coasters, t-shirts, earrings, figurines, Christmas ornaments, and throw pillows, to name a few. 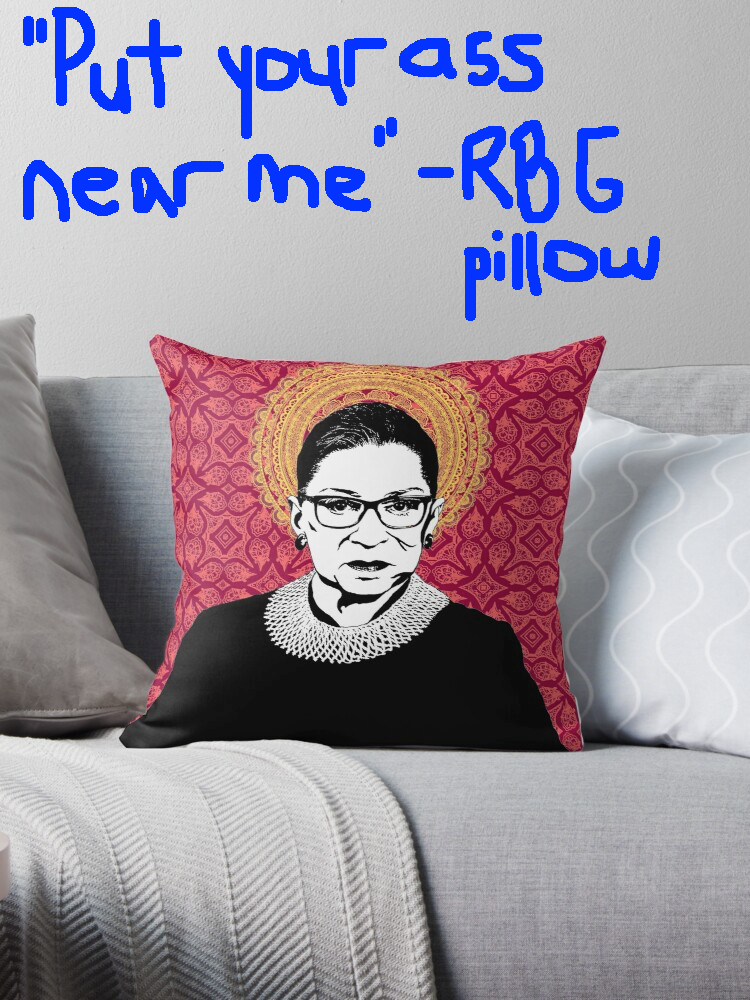 In addition to her face, many of these same items have her wearing a tilted crown, with the slogan ‘Notorious RBG’, an appropriation of the infamous picture of rapper Notorious B.I.G. Given her age, and her love of taking in opera (often with Antonin Scalia, close friend and person responsible for writing that constitutionally granted same-sex marriage was a “threat to American democracy,”) I find it unlikely Ginsburg was familiar with B.I.G.’s music. Moreover, of Colin Kaepernick’s anthem kneeling protest, Ginsburg had to say:

“I think it’s dumb and disrespectful. I would have the same answer if you asked me about flag burning. I think it’s a terrible thing to do, but I wouldn’t lock a person up for doing it. I would point out how ridiculous it seems to me to do such an act.”

With that in mind, it’s hard to imagine her co-signing the appropriation of the image of an artist whose music often referenced actual legal transgressions, not just kneeling or cloth burning.

This isn’t to say Ginsburg was bad, she wasn’t. She was just a person: she made mistakes, had rotten friends that were difficult to part with, and occasionally said some stupid stuff.

The brand built around Ginsburg gave us those same slivers of serotonin that caused us to overlook more important issues. If we’d completed a simple task to put things in order, we’d not find ourselves facing down our current predicament: the nomination and likely lifetime confirmation of a 48-year-old judge who is anti-abortion, thinks Obamacare is unconstitutional, and is anti-gay marriage.

Owning merch with Ginsburg on it was a way to momentarily forget the fact that the odds of her drawing breath versus her heart stopping were far worse than they should have been for anyone in her position. Unintentionally, it was also a visual reminder of our outdated Supreme Court system, and gave us unwarranted optimism about that same system of which she was a part.

Whether you bought the items or not, they reinforced a halo around her that discouraged people from asking that during her lifetime of opening doors, she leave us with good odds they would stay that way.