This is Naked Capitalism fundraising week. 1089 donors have already invested in our efforts to combat corruption and predatory conduct, particularly in the financial realm. Please join us and participate via our donation page, which shows how to give via check, credit card, debit card, or PayPal. Read about why we’re doing this fundraiser, what we’ve accomplished in the last year, and our current goal, Karōshi prevention.

CalPERS refuses to shape up. Its scheduled Monday Investment Committee meeting flagrantly defies California open meeting laws, specifically the Bagley-Keene Open Meeting Act. This blatant and willful misconduct occurs as the giant fund is set to have a judge rule that it violated the Bagley-Keene Open Meeting Act in Jelincic v. CalPERS. As readers may recall, former board member JJ Jelincic sued the giant fund over two refusals to produce records that should not be kept secret. One was for the transcript of a special board meeting held after Chief Investment Officer Ben Meng resigned abruptly. Jelnicic argued that the closed session was improper for a host of reasons, including that legal justification offered for having a secret chat did not apply to any of the things that CEO Marcie Frost later admitted were discussed in that session.

The reason we are highly confident that the judge will rule that CalPERS violated the open meeting law is that that was one of the demands in the Jelincic case and the judge has already said there was nothing he saw in the transcript that justified holding the discussion in so-called “closed session” as in closed to the public.

So what is CalPERS up to? Eye-poking the judge? Trying to sweep as much under the rug before the ruling, when the press might finally wake up and start to challenge CalPERS on its insistence in breaking the law again and again, apparently recognizing actions required to be shared with the public won’t stand the light of scrutiny?

Of the three planned violations of the open meeting laws, all set to happen this Monday, one is particularly alarming, since in a worst-case scenario, they could involve hiding criminal conduct. CalPERS’ former CEO Fred Buenrostro served a four and one half year Federal sentence for receiving bribes in connection with placement agent fees. In a separate action, New York Controller Alan Hevesi was also convicted for taking kickbacks from placement agents. As a result, California and other states greatly strengthened the disclosures required regarding placement agents.

Yet what do we see on CalPERS Monday Investment Committee Agenda? Notice the last item: 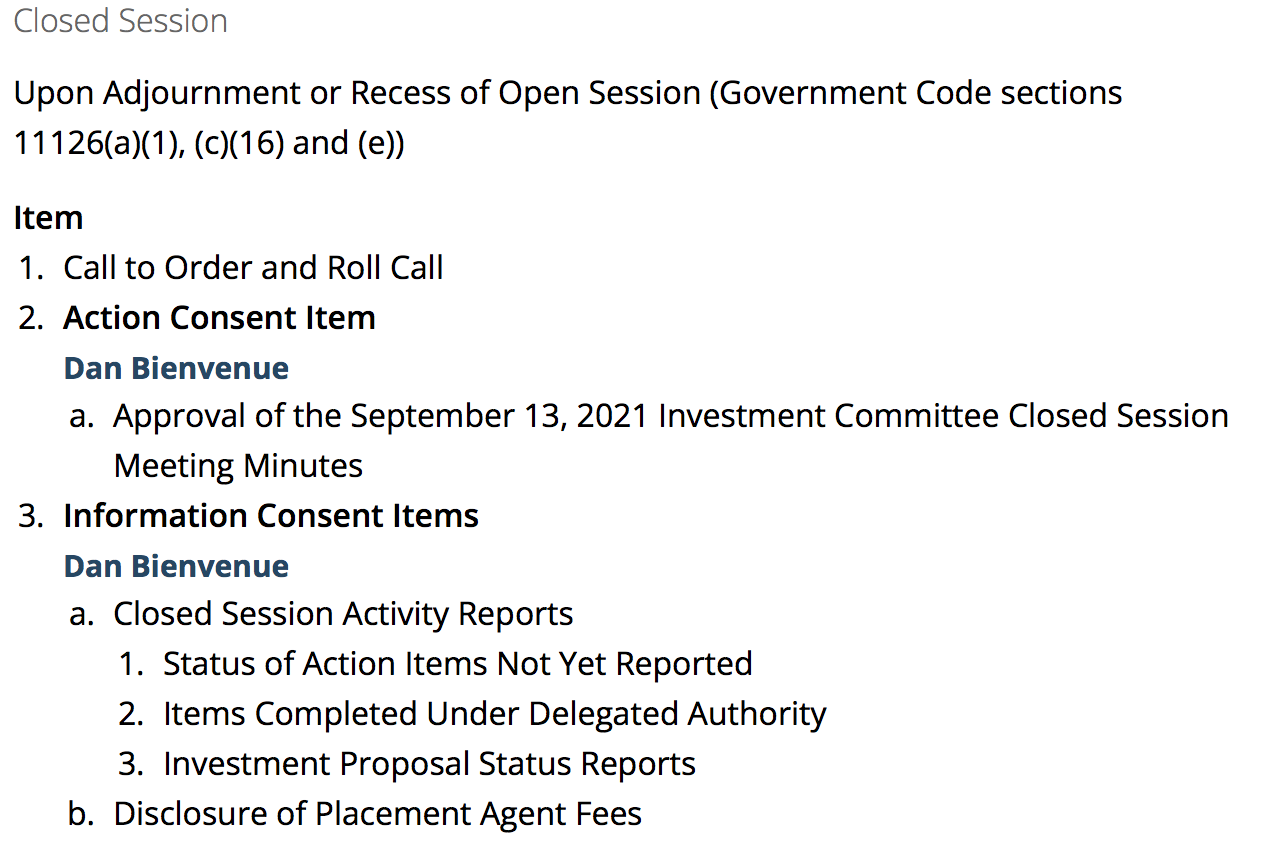 Even worse, as a result of the Buenrostro prosecution, CalPERS created a regulation to require extensive new disclosures of CalPERS’ placement agent activities. One can only assume that this move was made to head off legislation.

So what legally required disclosure is CalPERS trying to evade? Is it this part of the CalPERS regulation Section 559, Disclosure of Placement Agent Fees, Gifts and Campaign Contributions:

(D) A description of any and all compensation of any kind provided or agreed to be provided to a Placement Agent related to the assets, securities, or services offered to CalPERS, including the nature, timing and value thereof.

Is CalPERS trying to hide compensation that tipped the playing field in favor of certain placement agents, and if that string were pulled, it might expose that the extra compensation, and not the caliber of the services, were the reason for their selection?

Or how about this provision:

(F) The names of any current or former CalPERS Board members, employees, or Consultants who suggested or otherwise assisted in the retention of the Placement Agent.

Is that what CalPERS is trying to hide, that CalPERS insiders or consultants played a role in getting some of the chosen placement agents hired?

And note this part:

(g) All parties responsible for implementing, monitoring and complying with this regulation should consider the spirit as well as the literal expression of its provisions. In cases where there is uncertainty whether a disclosure should be made, this regulation shall be interpreted to require disclosure.

There is a carveout from this regulation, subsection (h), but CalPERS can’t pretend it is relying on that since it didn’t cite it as a justification for the closed session.

The second flagrant violation of open meeting laws occurs further up in the same agenda excerpted above, “Items Completed Under Delegated Authority.” This topic again does not even remotely qualify for closed session treatment. These are not pending investment decisions, which are allowed to be kept secret so as not to tip off other investors and put CalPERS at a disadvantage. And they are obviously neither personnel matters nor litigation-related. In fact, CalPERS beneficiaries should be alarmed that the staff and board are working together to hide what staff did with the board’s blank check and how those actions turned out.

The third planned “closed session” violation is a bit later in that meeting and has already been protested by board member Margaret Brown:

Since when is asset allocation or planned asset allocation a state secret? For decades, CalPERS has had its consultants review asset allocation in gory detail and make prospective recommendations, which are then approved (or rarely not) by the board. These strategic decisions are too far removed from actually pulling the buy and sell triggers to qualify for the pending investment action protection.

The apparent reason for putting this important and heretofore always public deliberation is in closed session is to make the actual decision there, and then revisit the topic in open session to put on have a cursory show of conducting the public’s business in public as the law requires. That means that this violation of the open meetings law is deliberate and calculated.

This chicanery again raises the question: What is CalPERS trying to hide, particularly on a topic which it never before tried to consider sneakily in private?

Board member Brown weighed in with Board President Henry Jones. The relevant section of the Investment Committee agenda was embedded in her message:

Agenda Item 4a. does not meet the exceptions under Bagley Keene for closed session as the discussion of risks and other issues associated with ALM adoption belong in open session.

Please have Item 4a removed from the closed session agenda.

Board member Brown added that staff presented a 43 page exhibit for discussion in its open session, and featured 2 pages from that document for the closed session. Again, aside from the fact that asset allocation briefings and decisions have never been a proper topic for in camera review, the fact that the underlying material is being shown to the public conclusively shows that the closed session treatment is illegal.

With this conduct, CalPERS is also openly opposing the prevailing trends in law and in regulation. We pointed out last week that SEC chair Gary Gensler, who is immune to revolving door inducements, announced a big push for greater transparency in private equity around fees, reporting of performance, conflicts of interest, and side letters. All of these devices help private equity investors pretend they don’t understand that private equity isn’t even remotely the good deal that the general partners and captured press pretends that it is.

CalPERS also labors under the misapprehension that getting Margaret Brown out of its hair as a board member means it will be able to engage in even more chicanery unimpeded. In fact, the most embarrassing events that CalPERS has faced in recent years have all come about via public information. A list: Former Chief Financial Officer Charles Asubonten’s resume fabrication. CEO Marcie Frost’s lies about being enrolled in non-existent dual bachelor’s/master’s degree program. CalPERS’ incoherent and too obviously corrupt effort to give private equity management over to outside entities. Former Chief Investment Officer Ben Meng’s abrupt resignation after we exposed that he had violated California conflict of interest laws. And now JJ Jelincic’s litigation, which even with the judge bending over backwards to indulge CalPERS, looks set via his remarks so far to be on track to give the fund a big black eye and encourage other Public Records Act lawsuits.

Jelincic did not go away quietly. Brown doesn’t plan to either. But CalPERS is too ensconced in its bubble of denial to realize she can be even more effective watchdog as an ex board member. Pass the popcorn.