This is Naked Capitalism fundraising week. 917 donors have already invested in our efforts to combat corruption and predatory conduct, particularly in the financial realm. Please join us and participate via our donation page, which shows how to give via check, credit card, debit card, or PayPal. Read about why we’re doing this fundraiser, what we’ve accomplished in the last year, and our current goal, bonuses for our guest writers.

Yves here. The saying, at least as far as consumer trends goes, is “As goes California, so goes the nation.” So it’s early to call New York City as a harbinger of the US as far as the Chinese vote is concerned. However, it’s not hard to think that Chinese parents who have invested heavily in their children’s eduction, both in money terms and their own time, are upset at the way elite and likely not so elite universities find ways to downrank academically excellent Chinese applicants, often resorting to stereotypes about nerdiness, to keep Chinese students from being markedly over-represented. Elite school have long had quotas, against private schools being overrepresented, against Jews who as a group, like the Chinese, also overachieve.

However, the repudiation in New York City didn’t come from affluent districts where voters might also have wallet reasons to decide the Republicans might not be so terrible. The reversals happened in middle and working class ‘hoods. And while education does not appear to be the main issue (hate crimes and Manhattan NIMBY-ism leading Chinese districts to be favored spots for housing the homeless), it did rate. The city under de Blasio has been pulling funds out of programs for gifted students.

By Rong Xiaoqing, Clifford Michel, Suhail Bhat and Will Welch. Originally published at THE CITY on November 11, 2021 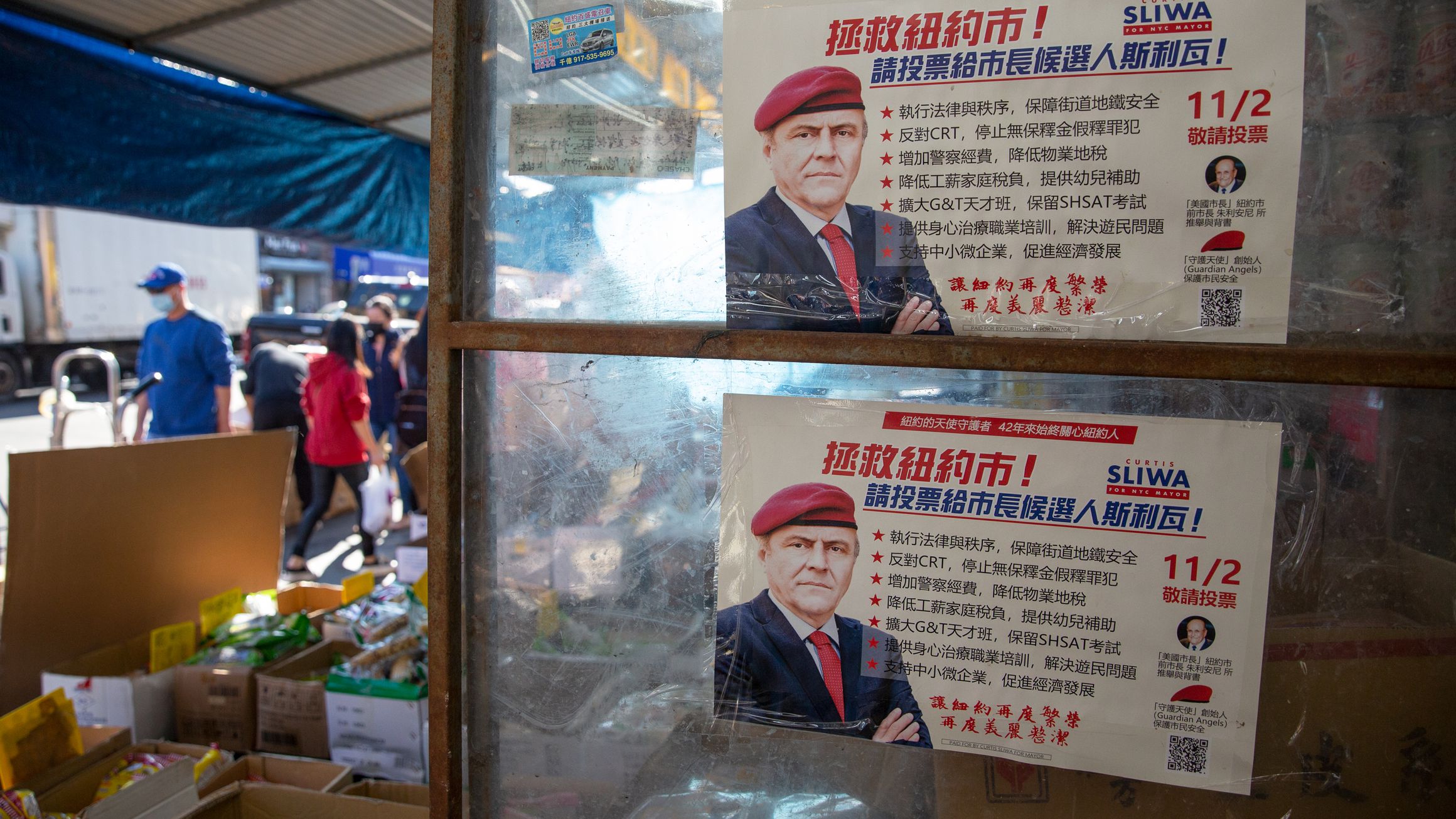 After casting his ballot in the early morning on Election Day, Ray Huang made more than a dozen trips to poll sites in Brooklyn’s Sunset Park neighborhood.

Each time, he brought with him one or two Chinese residents who came to vote for Republican mayoral candidate Curtis Sliwa, just as he did.

They weren’t alone: While Sliwa notched 29% of ballots cast citywide and 24% in Brooklyn, in central Sunset Park he got 46% against Democrat Eric Adams, city Board of Election data shows. In this hub of the neighborhood, known as Brooklyn’s Chinatown, 70% of residents categorized themselves as Asian in the 2020 census.

Across the five boroughs, Sliwa scored 44% of the vote in precincts where more than half of residents are Asian — surpassing his 40% of votes in white enclaves, 20% in majority-Hispanic districts and 6% in majority-Black districts.

It was not difficult for Huang, a Sunset Park resident since the 1980s and an emerging community leader, to persuade people he bumped into in the neighborhood to choose the Republican candidate, he said. Many of them had just participated in a demonstration Huang had organized six days before.

The Oct. 27 protest, targeting a homeless shelter the city plans to build on Eighth Avenue and 65th Street, attracted more than 1,000 New Yorkers not only from Sunset Park but from all over the city.

Sliwa marched with the protesters and addressed the crowd — vowing to stop building homeless shelters if elected.

Adams, during his own campaign, chose Sunset Park as the place to unveil a proposal to turn vacant hotel rooms in the boroughs outside of Manhattan into supportive housing units for homeless people.

“Where is Adams when we need him?” Huang asked. 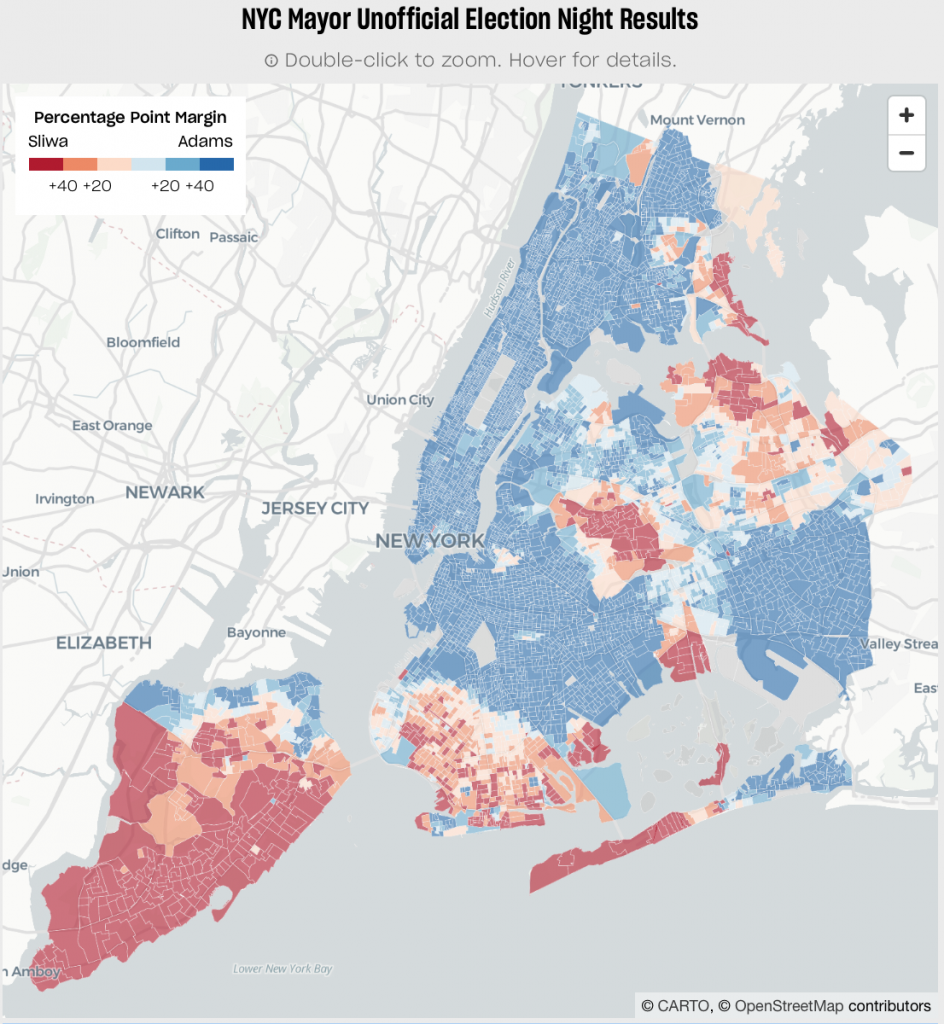 Note: Totals do not include absentee ballots
Source: NYC Board of Elections
Will Welch / THE CITY

Chinese New Yorkers make up the largest share of the city’s rapidly growing Asian population, which reached nearly 1.4 million in the 2020 census, accounting for more than half the city’s overall growth since 2010. Asians now represent nearly 16% of the city’s population, a record.

In 2019, the Mayor’s Office of Immigrant Affairs tallied nearly 418,000 New Yorkers it identified as being from China, accounting for nearly half of all Asian immigrants in the city. About 56% of Asian immigrants are naturalized citizens, according to MOIA — making them eligible to vote.

Homeless shelters are just one in a series of issues that galvanized many Chinese voters to align themselves with GOP candidates for mayor and City Council this year.

Other catalysts, according to activist leaders, include proposed reforms to specialized high school admissions and gifted and talented programs, plans to build new jails in areas that include Manhattan’s Chinatown, and bail reform reducing pretrial incarceration.

A wave of hate crimes targeting Asian Americans during the pandemic has heightened a sense of urgency about public safety and law enforcement. Asian anger and frustration have, for the first time, left a visible dent in a city election.

In the City Council, Republicans have flipped one formerly Democratic Brooklyn seat in a district where Asian New Yorkers make up 18% of the population. The GOP is also favored to win a Queens district that is 36% Asian.

In Asian-concentrated communities from Flushing to Bayside in Queens, to Sunset Park and Sheepshead Bay in Brooklyn, Sliwa led Adams from a few dozen to a few thousand votes — winning outright in 137 out of the city’s 317 majority-Asian election districts.

Rising Republican party leaders have noticed the trend. They include Rep. Lee Zeldin (R-L.I.), who’s running for governor with the backing of the New York State Republican and Conservative parties.

“Like so many New Yorkers, they’re concerned about public safety, the quality of their kids’ education, the rising cost of living and how the politicians controlling Albany aren’t fighting for the priorities most important to them,” said Katie Vincentz, a spokesperson for Zeldin’s campaign.

“They are incredibly upset that the Democratic Party dismantled a lot of laws that kept the community safe, like the bail reform,” she told THE CITY.

‘We Are Also Minorities’

On Nov. 6, Fei hosted a Zoom meeting with more than 30 Chinese activists – many of whom had campaigned for Sliwa — to discuss the strategy to mobilize voters for next year’s midterm and gubernatorial elections.

“After the protest against the homeless shelter, many protesters who were eager to vote found they hadn’t registered as voters,” said Fei, who came to the U.S. for graduate school in 2000 and cast his first ballot 18 years later.

He told the activists his goal is to help register 4,000 new Chinese voters in Sunset Park, preferably for the Republican Party, in the next one or two years. “We have a big untapped pool of voters, and many of these unregistered voters are new immigrants who are conservatives,” Fei said.

Huang was also on the Zoom meeting. A registered Democrat who says he is not considering switching parties anytime soon, Huang said he cast his ballot based on candidates’ values, not parties.

After a pause, he added: “But the values of the Republican Party resonate more with Chinese voters.”

Rep. Grace Meng (D-Queens) tweeted her alarm after seeing the Nov. 2 election results in her area of northeast Queens — and warned her fellow Democrats to wake up and start connecting with Asian voters.

Pending paper ballot counts, the assembly districts of @nily @edbraunstein @Barnwell30 @rontkim @Stacey23AD all went Republican. Our party better start giving more of a shit about #aapi voters and communities. No other community turned out at a faster pace than AAPIs in 2020. https://t.co/wGJvp19CeB

Until this year, Meng had served as vice chair of the national Democratic Party and had worked hard to reach out to Asian voters in red states from Georgia to Texas.

In an interview with THE CITY, Meng lamented that complacency had set in when it came to blue turf like New York, where Democrats feel safe and therefore haven’t invested resources.

She also described a kind of invisibility for Asian-Americans within her own party’s public voice.

“When our Democratic leaders talk about issues facing minority communities, oftentimes they are only talking about Black and Spanish communities,” said Meng. “But our community is the fastest growing community. And we are also minorities.”

A major turning point arrived in the summer of 2018, when thousands of previously non-political Asian New Yorkers protested de Blasio’s call to abandon the Specialized High Schools Admissions Test (SHSAT) because of racial disparities in the city’s elite classrooms.

The exams are the sole basis of entry to top high schools, including the majority-Asian Stuyvesant, Bronx Science and Brooklyn Tech.

“I had never participated in any protests until the SHSAT,” said Phil Wong, a freelance translator and a father of three who came to the U.S. from Hong Kong in 1974 when he was 6.

Wong became a member and then the chair of the Community Education Council 24 in Elmhurst, a position he held until June. He was one of the parents who sued the city over the specialized high school reform in 2019, a case that is still pending.

He is now the president of the Chinese American Citizens Alliance of Greater New York, leading campaigns to keep the SHSAT and gifted-and-talented programs. More recently, his group has taken on race-focused education, using “critical race theory” as a term of derision.

“The Democrats’ race-based so-called education equality reminds me of the Cultural Revolution in China,” said Wong, a registered Democrat who said he is considering switching to the GOP.

“I was so tired that I slept until 11 a.m. the next day and still got up with shaking legs. But I had no choice. To get their children a better education was the reason that many Chinese came to this country,” he said.

Pedestrians in Flushing, Queens Hiram Alejandro Durán/THE CITY
While education may have been the tinder, it was not the only issue that stoked the fire.

Robert Jin, a Queens insurer, said he got involved in politics in recent years because he believed “the city and the country were going in a wrong direction.”

He threw a fundraiser in Flushing last month for Sliwa that attracted 140 people and generated $110,000, after public matching funds.

Jin said he can’t believe Sliwa lost. But he told his WeChat followers there was no need to shed tears.

“We Chinese are awakening for the first time. And we’ll be invincible in next year’s governor election,” Jin said.