Yves here. Michael Hudson regularly calls for debt jubilees as a way of keeping rentiers from eating the entire economy. Even rational lenders recognize that extending credit ever and always results in some losses; even the most capable borrowers and shrewd financial players still run into “shit happens” train wrecks through no fault of their own. In the stone ages of finance, it was routine for banks to restructure loans if the borrower still had some capacity to make payments. But the brave new world of securitization created rigid contracts and created bad incentives, resulting in a lot fewer quiet workouts at the retail level (the end of credit training programs at big banks also resulted in the end of branch managers who were authorized to and capable of making/overseeing consumer workouts).

Here we have a rare example of a rare success in winning significant debt relief: salvaging New York City medallion owners, some of whom even inherited hefty taxi debts from a parent.

And I hope this development is also a harbinger of a turn in fortune for taxi drivers, who have seen their incomes gutted by investor-funded predatory pricing by Uber and Lyft. They’ve now been jacking up prices to the degree that I am hearing complaints in my gym (and Birmingham is not a taxi town; this is experiences while on the road). It looks like Uber, now facing difficulties in many markets with its gig model and having to pay more for drivers-as-at-least-sort-of-employees, is now raising prices significantly, way above what cabs would charge. If this persists, you’ll see some reversion to taxis.

By Samantha Maldonado, smaldonado@thecity.nyc. Originally published at THE CITY on November 3, 2021 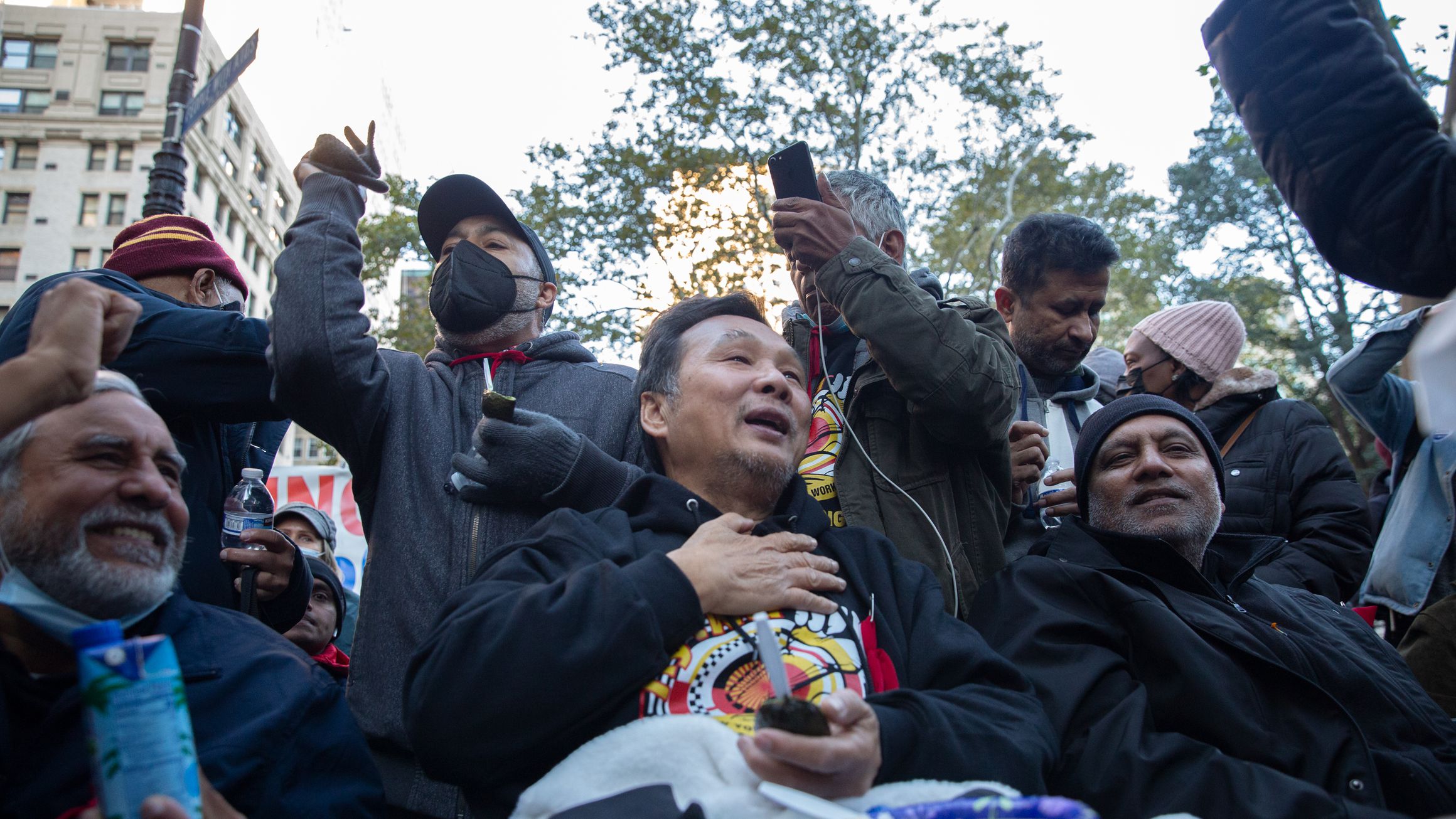 It was a day they hungered for, but feared would never come.

Cab drivers on Wednesday broke their hunger strike after reaching an agreement with the city to restructure the crushing debt that’s devastated many taxi medallion owners.

The cabbies danced outside of City Hall, with chants of “No more suicides” ringing through the brisk air. Some cried from their seats nearby, snuggling beneath blankets. Others savored the taste of avocado, the first food they’d eaten in over two weeks.

For 46 straight days and nights, cab drivers and their allies have protested outside City Hall — escalating to a hunger strike for the past 15 days as they called on the city to step in and help ease their overwhelming financial burden.

“I couldn’t be happier right now,” said one of the hunger strikers, Augustine Tang, 37, a driver from Brooklyn. “I’m so relieved. We didn’t ever think it would get to this point. What people don’t really see is that we have been here for years. We’ve been protesting for so many years.”

Under the agreement, Marblegate Asset Management — the private equity firm that is the largest holder of medallion loans — will restructure loans to a maximum of $200,000, which then decreases to $170,000 with a grant from the city of $30,000.

The interest rate will be capped at 5% over a 20-year term, which will amount to monthly payments of $1,122. That’s a far cry from the hundreds of thousands in loans some drivers long carried as medallion value plummeted amid competition from app-based rideshare services.

Tang’s father, originally from Hong Kong, drove a yellow taxi. When he died in 2015, Tang inherited the medallion and the associated $530,000 in debt. He carries on his father’s legacy through driving — and fighting for a win.

“I hope he’s proud,” Tang said, tearing up. “I’m sure he didn’t want me to go through what I went through throughout this journey, but us winning has to be something.”

The deal will work in tandem with the city’s federally funded $65 million Medallion Relief Program, which had provided $21.4 million in debt relief for 173 medallion owners as of Oct. 30.

“Taxi workers have worked tirelessly to make New York City the most vibrant city in the world, and we refuse to leave them behind,” Mayor Bill de Blasio said in a statement.

The city’s number is somewhat higher than the $145,000 maximum loan the New York Taxi Worker Alliance, which represents 25,000 taxi and app-based drivers, had sought. But crucially, the city agreed to guarantee the principal of the loans in case of default.

“The guarantee was the biggest thing we needed,” Jaslin Kaur, a former candidate for City Council from Glen Oaks, Queens. “Without the guarantee, we knew drivers would default on their loans and, without having a protection plan in place, that lenders would be able to abuse many drivers, too.” 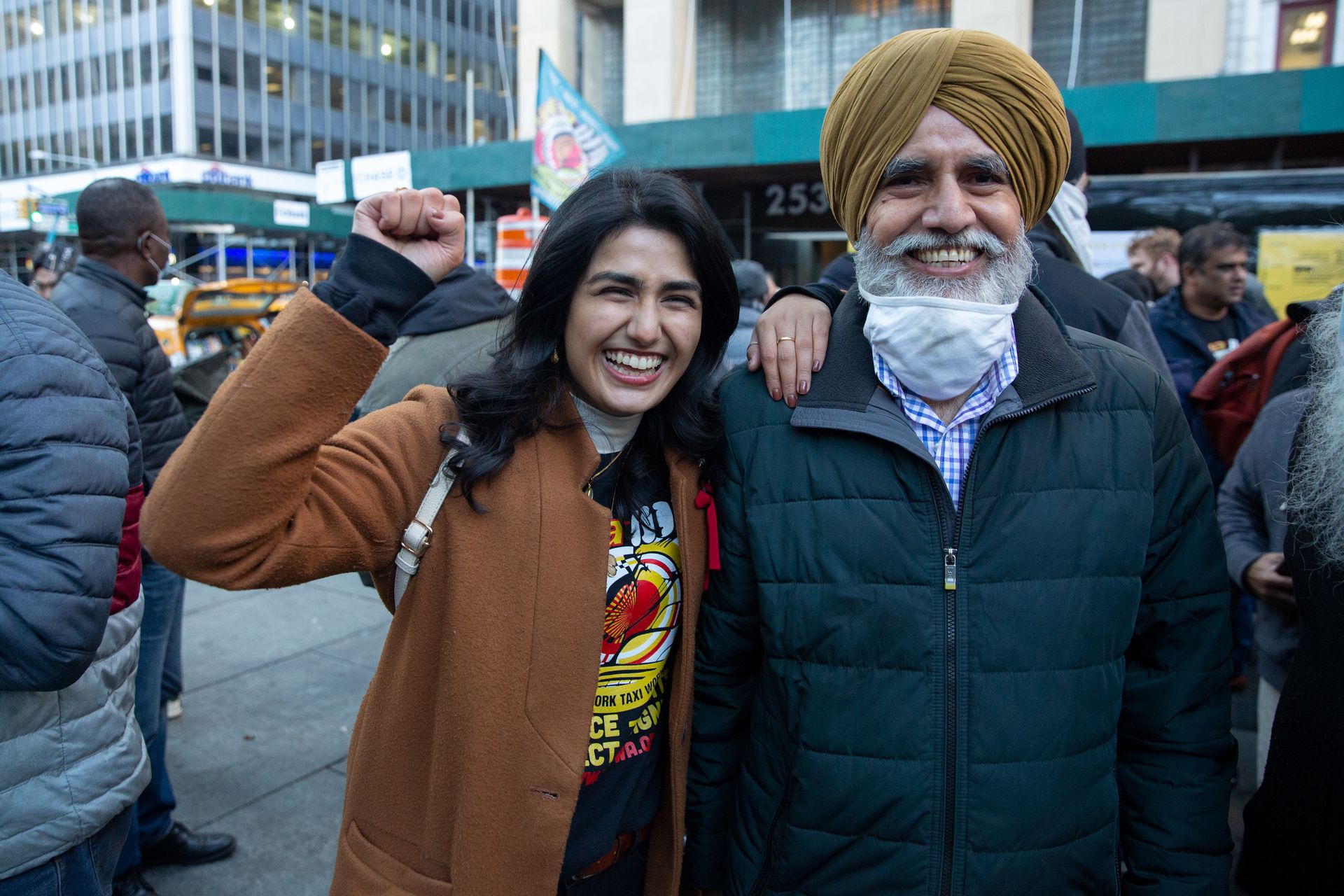 Kaur’s father, Partap Singh, 62, has been a taxi driver for three decades. Burdened with debt from the medallion market’s crash, the family had relied on food stamps and Kaur was forced to drop out of New York University. The experience drove her to run for office.

On Wednesday, the darker days were behind the father-daughter duo. Singh grinned from ear to ear as he hugged his daughter and fellow strikers.

“After 30 years, I never would have thought about it at this stage. It’s so amazing,” he said. “We have a lot of plans, but first of all, we relax now.”

Many cabbies shoulder debts as high as half a million dollars and more — loans they incurred after the pre-pandemic collapse of the taxi industry. The medallions that were once worth as much as $1 million dropped to a fraction of what they cost, due to the growth of app-based rideshare companies like Uber and Lyft.

The pandemic further decimated ridership, preventing the drivers from paying for costs like repairs and insurance.

Reporting by The New York Times brought the plight of the medallion owners to a wide audience, helping galvanize support for the struggling cabbies.

At least nine indebted drivers have died by suicide, including Kenny Chow, who took his lifein May 2018 at the age of 56. An immigrant from Myanmar, he’d bought a medallion for more than $750,000, worked seven days a week and couldn’t get out from under the weight of the debt, on top of paying for cancer treatment for his wife, who later died.

Kenny’s brother, Richard Chow, 63, also a cab driver, took part in the hunger strike for 15 days. He said his happiness at the deal with the city almost made him forget his hunger and dizziness.

“Finally, we made history, and I’m very proud,” said Chow, who lives in Staten Island and said he owes nearly $390,000 to his lender. “I’d like to see my brother alive. If it were three years ago, my brother … would be here for this celebration. But I miss my brother, I’ve broken my heart.”

Chow said if he had the opportunity, he’d tell his brother: “We’re going to save 6,000 medallion owners. No more suicides. No more bankruptcy.”

We just broke our hunger strike. And let me tell you. The dates and avocado are…the best I’ve ever had. pic.twitter.com/GfBCT86oLs

They organized with groups, including the Democratic Socialists of America, the Street Vendors Project and City Workers for Justice to seal their deal.

“This means everything. It’s rare that everything you fight for you win,” Mamdani said. “It’s not a half victory, it’s not an almost victory, it’s a complete victory. These drivers have won what they deserve.”

Hanif, who participated in 10 days of the hunger strike, told THE CITY that Senate Majority Leader Chuck Schumer called her before her election night victory party in Gowanus Tuesday to say he was anticipating good news.

“He’s a constituent of mine, so it feels good to have him as a champion in our corner… Schumer and his staff have been making daily phone calls,” she said Tuesday night. “What we’re doing is working.”

As the cabbies celebrated with cheers and music, a brighter future loomed before them.

Tang said the newly “sustainable mortgage” for his medallion means he and his wife can make plans for the rest of their lives.

“I can have a family now,” Tang said.

He pointed to the dozens of older drivers around him who could now embrace the possibilities for their lives, too, beyond paying off a mountain of debt.

Mamdani, although rejoicing in the victory, said the fight is far from over.

“The city has a huge responsibility that it has reckoned with at this moment, but we can never forget Uber and Lyft,” he said. “In terms of what the future holds, it continues to be accountability for this crisis and to hold those actors accountable.”