The Enormous Hole That Whaling Left Behind The Atlantic (dk).

Remember your living beyond your means, you need to cut back on carbon and you are the problem! pic.twitter.com/pVgVXGzWhp

Beware: Gaia may destroy humans before we destroy the Earth James Lovelock, Guardian

Water Is Life, and Also a Trade Secret Boondoggle

We have had vaccination drive successes, but apparently it is impossible to learn from them:

Mandates. A well-organized campaign. No politics. How Puerto Rico’s vaccine drive turned into a success STAT

How a Group of Black Doctors Got Philadelphia Vaccinated Bloomberg

Covid didn’t vote Politico. “We’re going to need drugs to dig our way out of this.” Not a word on ventilation, naturally.

Why scientists worldwide are watching UK COVID infections Nature. “As one of the first countries to trust high vaccine coverage and public responsibility alone to control the spread of SARS-CoV-2, the United Kingdom has become a control experiment that scientists across the world are studying.”

SARS-CoV-2 indoor air transmission is a threat that can be addressed with science PNAS. This article summarizes a National Academies of Science held in August 2020. Fundamentally, nothing will change.

SARS-CoV-2 Dose, Infection, and Disease Outcomes for COVID-19 – A Review (Accepted Manuscript) Clinical Infectious Diseases. Review of the literature. “We conclude that while there is an association between SARS-CoV-2 dose and infection, data do not support a relationship between dose and COVID-19 severity. Non-pharmaceutical interventions may limit the inoculum dose from an exposure, thereby reducing the risk of infection, but they are unlikely to individually have an impact on COVID-19 severity.”

US journalist denied bail in Myanmar The Hill. Editor of Frontier Myanmar.

America Is Playing With Fire In Syria The American Conservative

It’s Not That Democrats Lost. It’s That They Lost Everywhere Governing

How a truck driver spent $153 on his N.J. election campaign to likely dethrone a political kingpin NJ.com. No final results yet.

“As terminal operators pushed for automation to reduce human interaction, a glitch in the system can render crane operators and truck drivers unable to move without further instructions, [Bill Aboudi, president of AB Trucking] said. ‘It’s the terminal operators that are not managing the workforce properly and don’t realize that they had a problem with a computer system until it’s too late,’ Aboudi told FreightWaves. ‘It’s often the longshoremen and the truck drivers that pay the price and are forced to sit because of the terminal operators’ mistakes.'”

Steamship lines and terminal operators have relationships when it comes to which containers can be moved and which chassis provider can be used.

If a trucking company or driver returns or delivers an empty container at the wrong yard or under the wrong interchange company, some chassis providers charge a “misuse fee” of more than $1,000 per occurrence.

Some truck drivers say they have been ticketed and banned from a terminal for 30 days to upward of 180 days for returning a chassis to the wrong equipment provider, failing to understand a security guard’s instructions or other minor infractions.

Trucking companies say there’s no due process to appeal the tickets or bans imposed by employees at the port terminals, who scan or track drivers’ Transportation Worker Identification Credential, or TWIC, card numbers. Often, if a carrier protests a driver’s ban, more days are added to the suspension.

Sacred things that can never be changed or discussed: The wage relation; rents and fees; contracts. Could it be — hear me out — that the problems with port congestion are not primarily technical? (Well, except for the IT. You can bet all these sacred social relations are built into the software.) 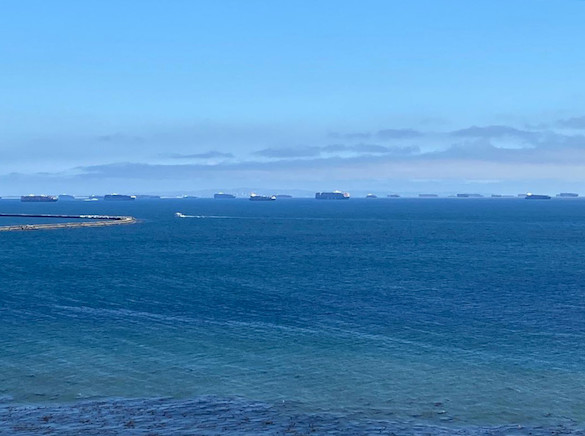 Lovely shade of blue. Is it Norwegian?

Royal Marines force US troops to surrender just days into training exercise Daily Telegraph. “The Royal Marines’ success was achieved by targeting the US headquarters and valuable equipment, paralysing counter-attacks from the Americans.”