We predicted a mid-term wipeout for the Democrats based on their indifference to supply chain-induced shortages, which are already making critical medications like chemotherapy drugs and insulin hard to get. That’s now become a much less daring call based on challenger Glenn Youngkin beating former governor and Democratic fixture Terry McAuliffe by a comfortable margin, a real blow to Democrats’ trying to convince themselves that the dogs are eating their dogfood. From NBC:

The state was Democrats’ to lose. No Republican had won statewide since 2009. Biden won by 10 percentage points last November. And outgoing Democratic Gov. Ralph Northam, who is prohibited by the state constitution from running for a second term, won by 9 percentage points in 2017. Democrats won control of the state legislature for the first time in decades two years ago and pushed through an expansion of early voting rules that some analysts predicted would help the party turn out its base.

As far as I can tell, the Democrats big pitch for McAuliffe was that Youngkin was a Trumpie. Rather hard to pin that on an independently wealthy businessman (ex the private equity firm Carlyle) who is exactly the sort the Trump Administration would have given a senior post in a heartbeat had he been game. The Youngkin team managed to persuade Trump to stay out of Virginia, and the ex prez made only a few supportive noises from the sidelines.

It also seems noteworthy that the press called the Virginia election late. I can’t recall, clock-wise, when I checked, but then, according to Associated Press, over 92% of the votes had been counted and Youngkin was ahead by two points….yet no one had called the race? By contrast, our John Siman, who teaches in Loudon, had sent an e-mail at 10:01 EDT, with scruffy Buzzfeed declaring Youngkin the winner, with the majors not following suit for more than two and a half ours. What gives>?

And remember, absentee ballots, which were expected to skew Democrat, were tallied first.

Oh, and the Democrats may have lost the Virginia house by one vote. Stay tuned.

And in the writeups I’ve seen so far (Wall Street Journal, The Hill, Associated Press, NBC, Bloomberg, save for Bloomberg, no one included the actual results, as in Youngkin 51%, McAuliffe 48.3% when Associated Press weighted in. I can’t recall evah seeing an omission like this. Is it hive mind self-censorship? The Journal admittedly has this image on its first page, but not in the article proper, which is where you land if you fallow an e-mail alert or Twitter of Facebook link: 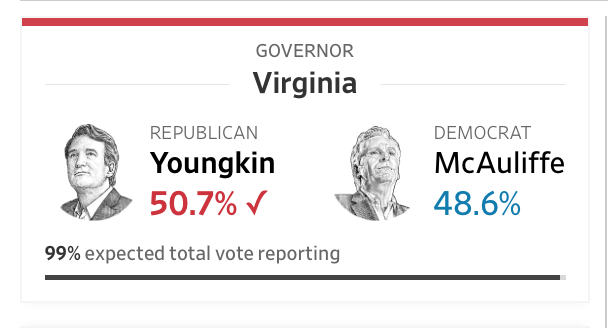 By contrast, the Democrats’ efforts to shore up McAuliffe not only didn’t succeed but appear to have backfired. The press took note of McAullife’s use of what the Democrats consider to be star power. From Associated Press last week in In Virginia, McAuliffe brings big names, Youngkin goes solo:

Democrat Terry McAuliffe has brought in the biggest names in Democratic politics to come to his aid in Virginia’s hotly contested gubernatorial race: Obama, Harris, Abrams, Biden (both Joe and Jill).

In fact, if you look at polling over time (not that the polls were so hot, they predicted the candidates as tied or Youngkin only a half point ahead on the eve of voting), Youngkin pulled ahead right before the election: 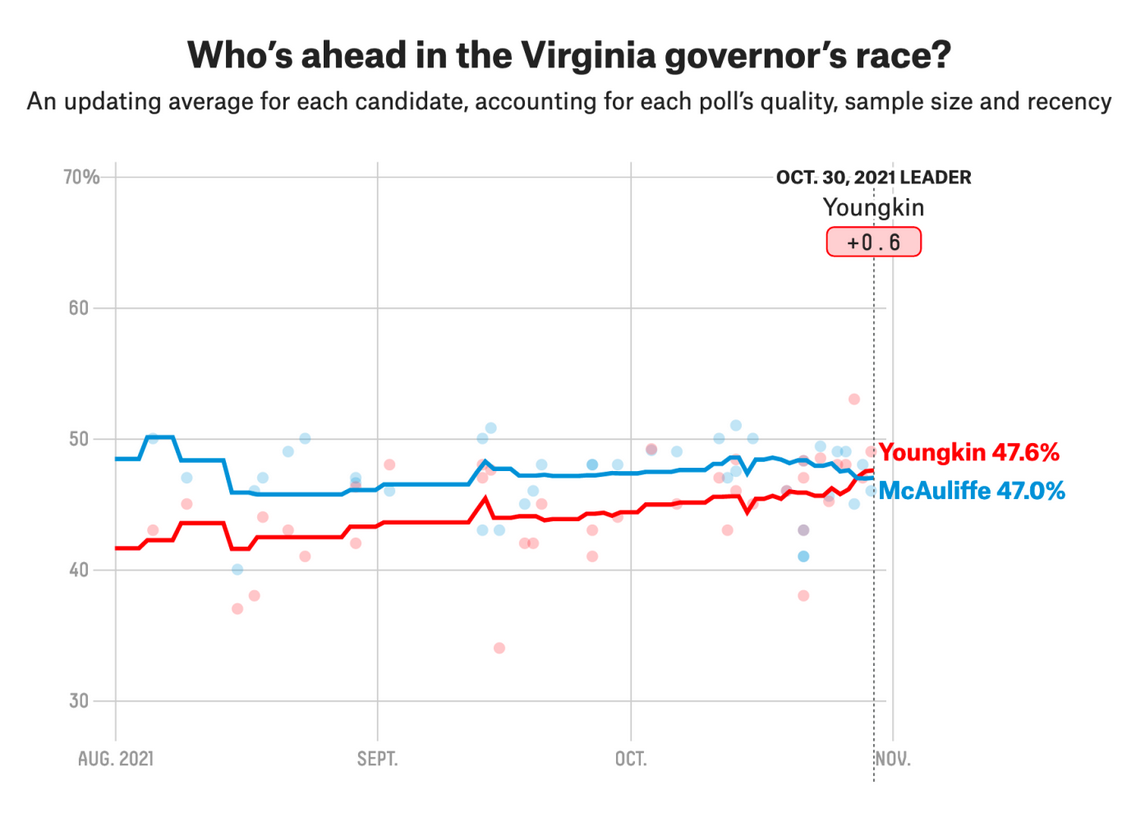 Nate Silver commented one day ago:

On one hand, the competitiveness of the race is a bit surprising as Virginia has leaned Democratic in recent years. It voted for President Biden by 10 points in 2020, and it has elected a Democrat in every statewide election dating back to 2012.1 But on the other hand, this D+5 state, according to FiveThirtyEight’s partisan lean,2 is still very susceptible to shifts in the national environment. And thanks to an unpopular Democratic president in the White House, the electoral environment currently favors the GOP.

Headed into the election, Biden’s approval rating sits at about 43 percent and his disapproval rating at about 51 percent, according to FiveThirtyEight’s presidential approval tracker.3 It’s underwater in Virginia, too. Recent polls from USA Today/Suffolk University, Fox News and The Washington Post/Schar School found Biden’s approval rating in the mid-to-low 40s. This may galvanize Republicans — who were already more likely to show up at the polls in reaction to having a Democratic president — while also potentially repelling some independents who backed Biden last November. It’s also dampened enthusiasm among Democrats. The final poll from Christopher Newport University’s Wason Center found that 80 percent of Republicans were “very enthusiastic” about voting, compared with just 65 percent of Democrats.

So it was clueless and probably counterproductive to send in national Democratic figures when the voters are not keen about them. Even worse, Obama scolded voters the day before the Loundon county teen accused of raping a girl in a women’s bathroom while cross-dressing was found guilty on an pervious rape, um, non-consensual sex charge.

It’s not clear what Obama meant by “trumped up culture wars” in his speech, but many took it as a slap against parents upset that a boy with an outstanding rape allegation was allowed to use a women’s bathroom. And if you look at the poll chart, Youngkin’s momentum increased after the speech. So at a minimum, Obama’s star turn was no help.

Youngkin, by contrast, made a point of sticking strictly to in-state issues. McAuliffe, who could have tried to stay above the teaching controversy by (correctly) depicting it as a local matter, instead put himself on the side of the defensive officialdom by saying, “I don’t think parents should be telling schools what they should teach.” Youngkin made hay with that in campaign ads.

Youngkin also promised more responsive services. The night before the election, he told voters they would know he’d changed things when they called the DMV and not only got a live person but also had that person say, “How can I help you?” The crowd roared.

Exit polls had voters putting the economy as their top issue and “education” as number two. But the Loudon controversy got so much attention that one wonders if it had greater impact on the marginal voter.

And the Democrats couldn’t call out Youngkin (a native son, unlike McAuliffe) as a Richie Rich:

I love that Terry McAuliffe couldn’t attack Youngkin’s Carlyle group record because McAuliffe was an investor in a Carlyle fund.

Ladies and gentlemen, the Democrats!

And although the fat lady has not yet sung, an even more dire signal for Democrats’ prospects comes from New Jersey: