Yves here. Some experts as well as readers have pointed out the pollution cost of mining the materials needed to produce electric vehicles and wind turbines. A few have gone further and highlighted supply constraints for lithium. This article takes a broader look at the prospective demand for key metals as more countries and concerns adopt net-zero emissions plans.

Low greenhouse gas technologies require more metals than their fossil fuel-based counterparts. This column estimates supply elasticities and pins down the price impact of the energy transition on the metals markets. The results show that prices for copper, nickel, cobalt, and lithium could reach historical peaks for an unprecedented, sustained period in a net zero emissions scenario. The total value of production could rise more than four-fold for the period 2021-2040, rivaling the total value of crude oil production.

If metal demand ramps up and supply is slow to react, a multiyear price rally may follow – possibly derailing or delaying the energy transition. To shed light on the issue, our new paper (Boer et al. 2021), together with the related IMF World Economic Outlook’s Commodity Special Feature (IMF 2021) introduce ‘energy transition’ metals, estimates price elasticity of supply, and presents price scenarios for major metals. We also provide estimates for revenues and identify which countries may benefit.

Our analysis focuses on copper, nickel, cobalt, and lithium. These metals are considered as the most important metals that are highly affected by the energy transition (World Bank 2020,  International Energy Agency 2021b). Copper and nickel are well-established metals that have been traded for more than a century on metal exchanges. They are used broadly across the economy and across low carbon technologies. Cobalt and lithium, instead, are minor but rising metals. They started being traded on metal exchanges in the 2010s and have gained in popularity, mainly because they are used in batteries. 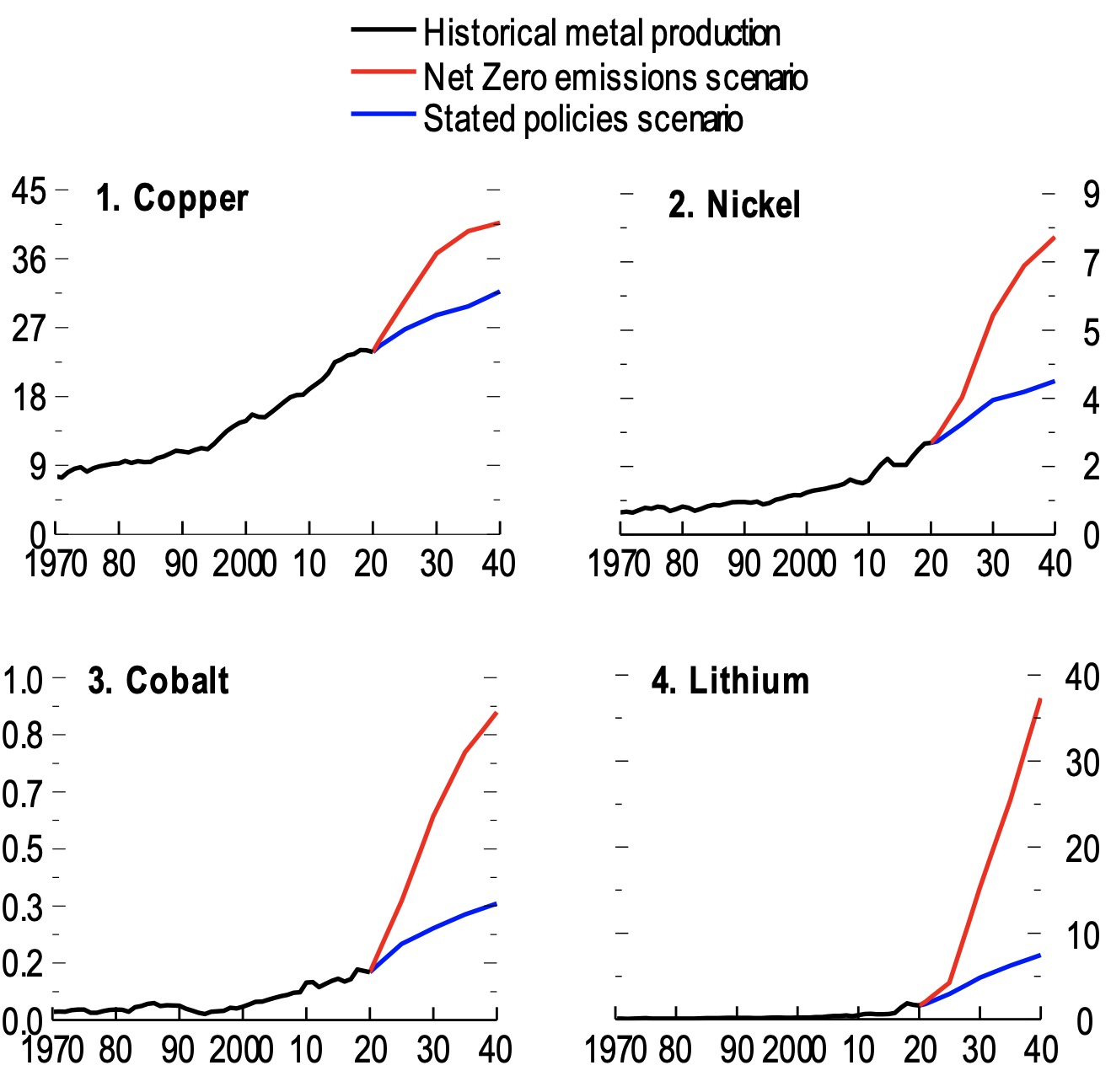 A fast-paced transition that is consistent with the ‘net zero’ scenario of the International Energy Agency (IEA), implies soaring demand for metals over the next decade (see Figure 1). In this scenario, the total consumption of lithium (Li) and cobalt (C) rises by a factor of more than six, driven by clean energy demand (mostly batteries). Similarly, copper (Cu) shows a twofold increase and nickel (Ni) a fourfold increase in total consumption (including demand unrelated to clean energy). In contrast, the increase in metals consumption is much more modest in the IEA’s ‘stated policies’ scenario (a slow-paced energy transition scenario that is inconsistent with climate goals).

How Elastic Is the Supply of Metals in the Long Run?

While metals demand could soar, the supply of metals typically reacts slowly to price signals. This depends, in part, on production methods. Copper, nickel, and cobalt are extracted in mines, which often require capital intensive investment and take as long as 19 years to construct. In contrast, lithium is often extracted from mineral springs and brine as salty water is pumped from the earth. As such, lead times to open new production facilities are shorter.

To estimate supply elasticities at different horizons, separate structural vector autoregressive (VAR) models and data are used for each metals market, including global economic activity, metals output, and real prices from 1879 to 2020 (where available). VAR models are a standard way to model commodity markets (Kilian 2009, Baumeister and Hamilton 2019, Stuermer 2018, Jacks and Stuermer 2020). 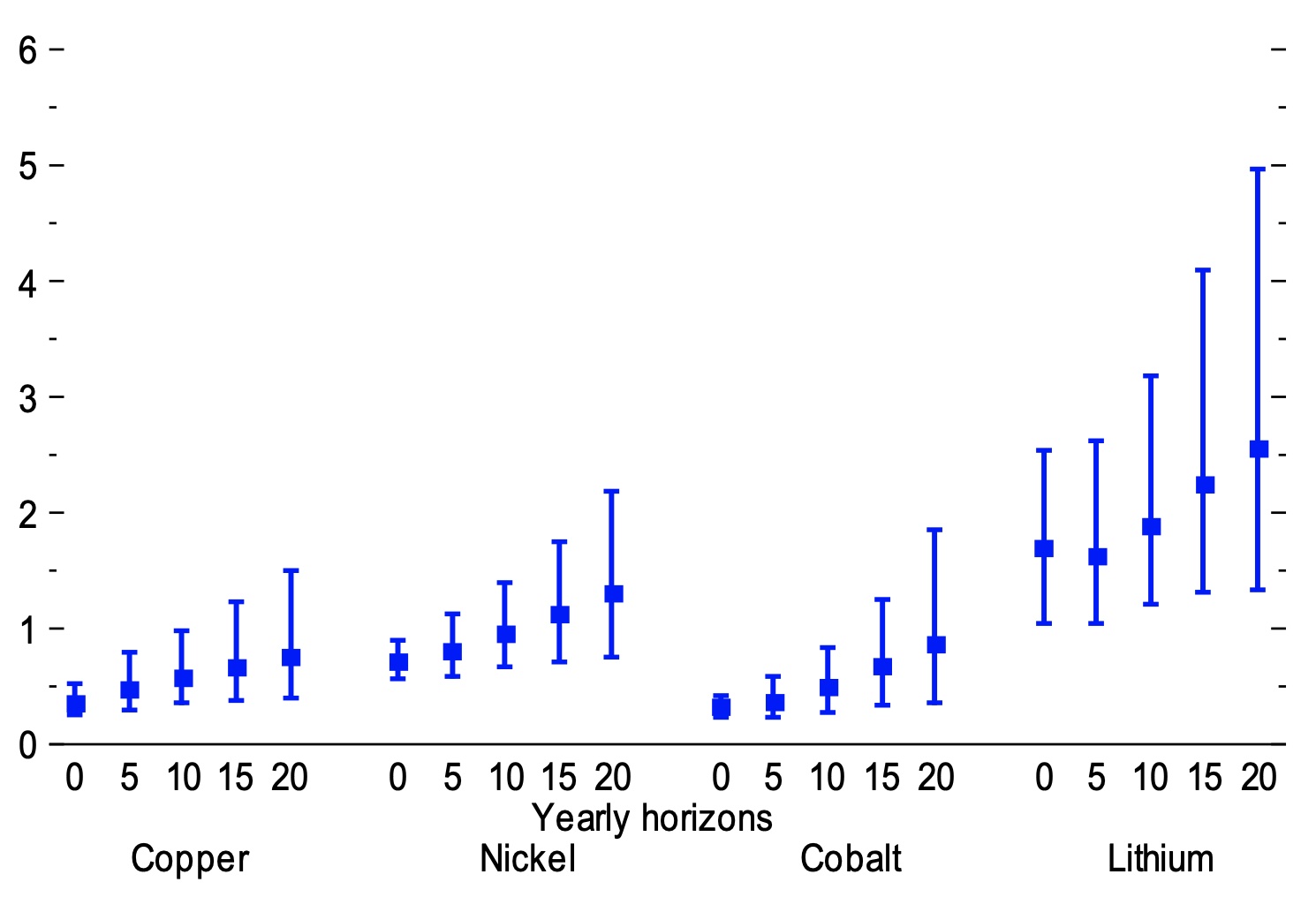 Sources: Schwerhoff and Stuermer (2020); US Geological Survey; IMF staff calculations.
Note: Supply elasticities are the ratio of the change in price and output from horizon 0 to 20 years, derived from metal-specific demand shocks. Lower and uppoer bounds are the 16th and 84th percentiles, respectively. See online appendix 1.SF.1 for methodology..

The above identification strategy allows us to construct structural price scenarios following Antolin-Diaz et al. (2021). We pin down a series of exogenously and metal-specific demand-driven price shocks that incentivise the production path needed for the energy transition in the different IEA scenarios. A price path implied by these shocks is then derived.

The four metals are potential bottlenecks for the energy transition. Inflation-adjusted metal prices would reach peaks similar to historical ones but for an unprecedented sustained period of roughly a decade in the IEA’s net zero emissions scenario (Figure 3). This would imply that real prices of nickel, cobalt and lithium would persistently rise several hundred percent from 2020 levels, while the copper price would increase more than 60%. In the IEA’s stated policy scenario, real prices would broadly stay in the range of the 2020 average. 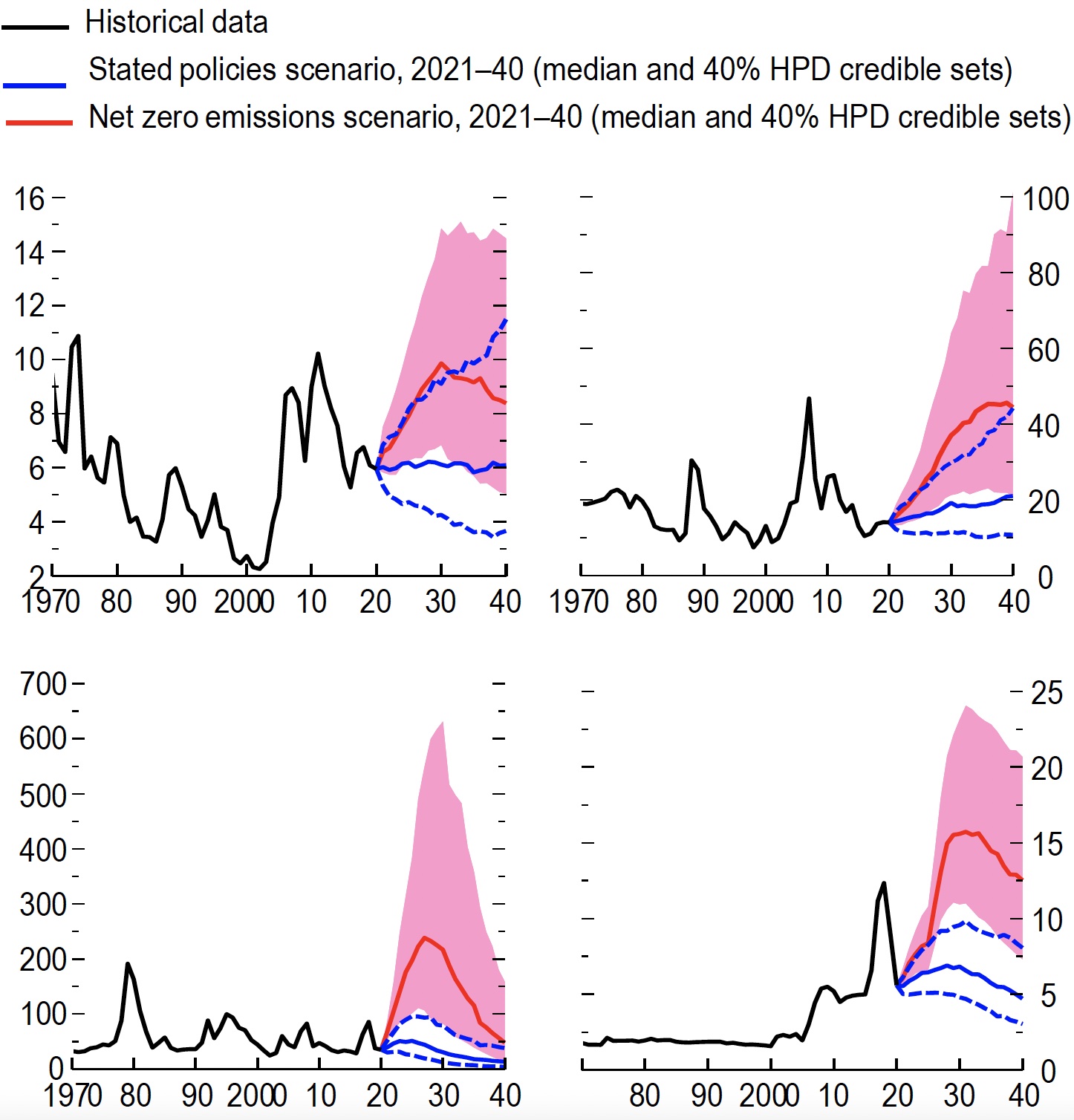 In the net zero emissions scenario, the demand boom could lead to a more than fourfold increase in the value of metals production – totaling $13 trillion accumulated over the next two decades for the four metals alone. This could rival the estimated value of oil production in a net zero emissions scenario over that same period (see Table 1). This would make the four metals macro-relevant for inflation, trade, and output, and provide significant windfalls to commodity producers.

Sources: International Energy Agency; IMF staff calculations.
Note: For 2021-2040, prices of $30 a barrel for oil, $1.50 a million British thermal units for natural gas, and $40 a metric tonne for coal are assumed.

The supply of metals is quite concentrated, implying that a few top producers may stand to benefit. In most cases, countries that have the largest production have the highest level of reserves and are therefore likely to be prospective producers. The Democratic Republic of the Congo, for example, accounts for about 70% of global cobalt output and 50% of reserves (Figure 4). Other countries that stand out in production and reserves include Australia (for lithium, cobalt, and nickel); Chile (for copper and lithium); and, to lesser extent, Peru, Russia, Indonesia, and South Africa. 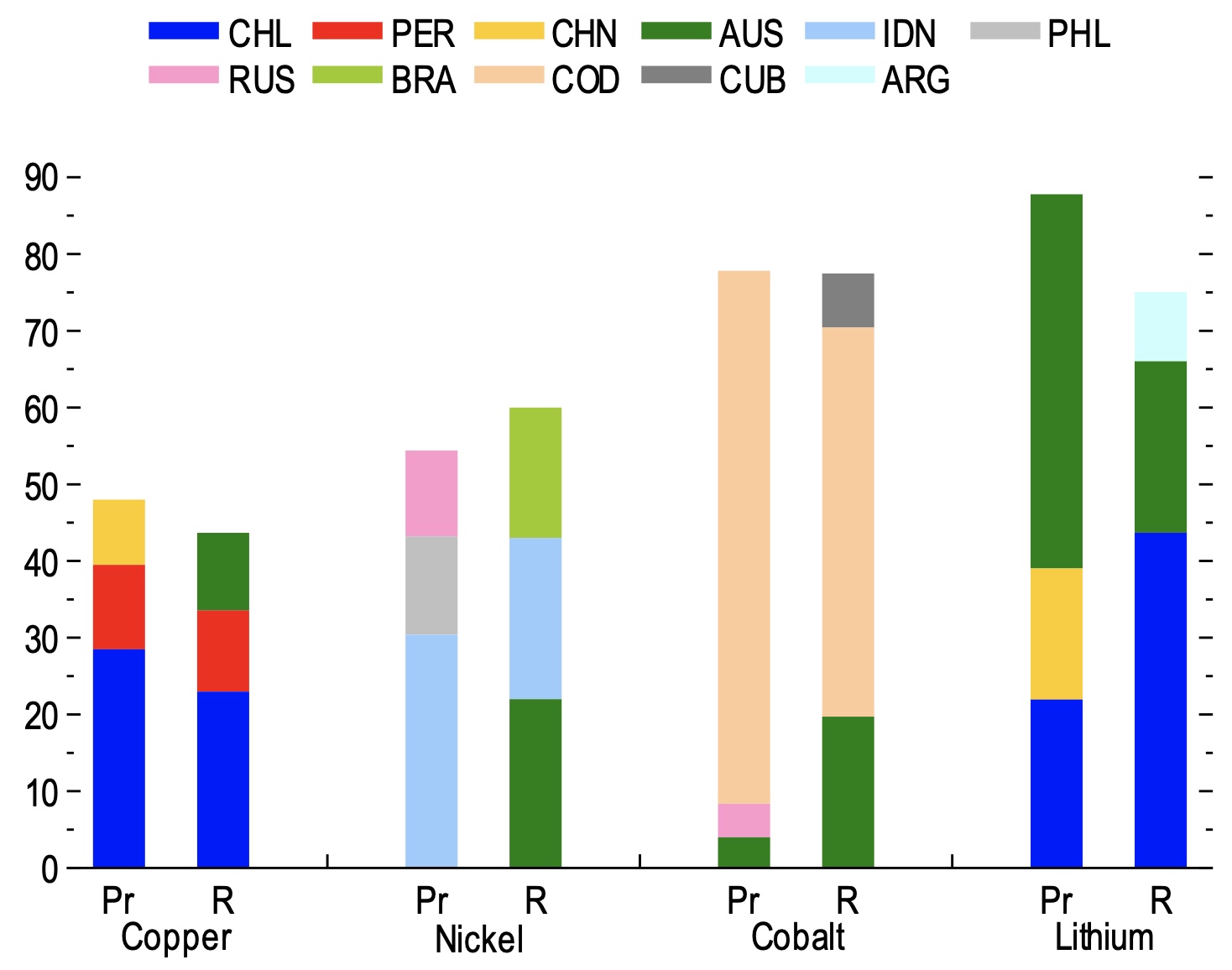 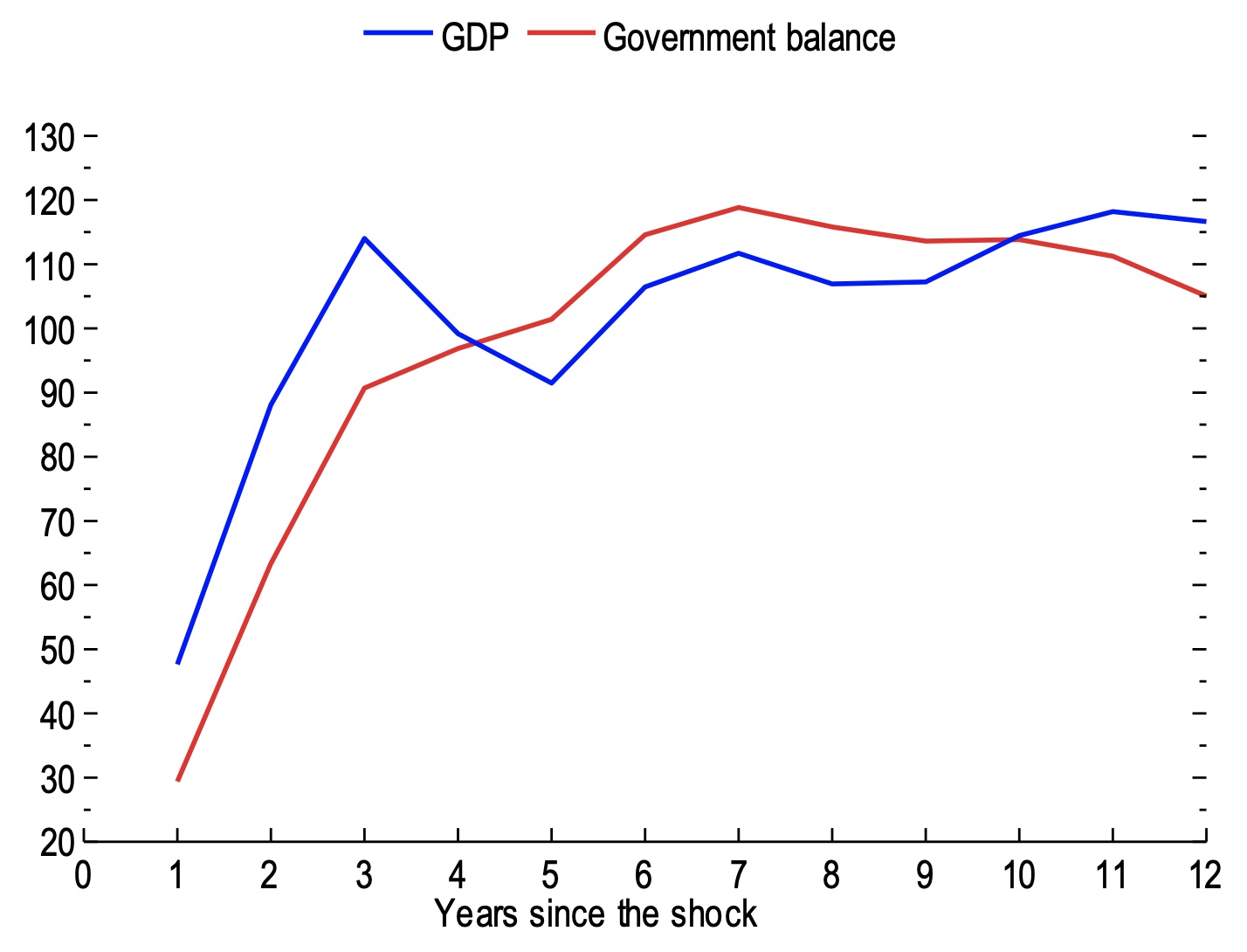 Source: IMF calculations.
Note: The figure shows panel vector autoregression generalised impulse reponses following Persaran and Shin (1998) for the differences in GDP growth and the general government balance-to-GDP ratio of the 15 largest importers for a one standard deviation shock to metal prices (about 15%).

High uncertainty surrounds the demand scenarios. First, technological change is hard to predict. Second, the speed and direction of the energy transition depend on policy decisions.

High policy uncertainty is detrimental as it may hinder mining investment and increase the chances that high metal prices will derail or delay the energy transition.

Finally, an international institution with a mandate covering metals – analogous to the IEA for energy and the Food and Agricultural Organization for agricultural goods – could play a pivotal role in data dissemination and analysis, industry standards, and international cooperation.