Western countries are facing an ‘epidemic of solitude’. Though its impact on mental health has attracted considerable attention, little is known about its economic effects. This column distinguishes between two forms of solitude – loneliness and living alone – and studies their influence on the economic performance of European regions at the local level. Greater shares of people living alone drive economic growth, whereas an increase in loneliness has damaging economic consequences. Though the relationship is complex and non-linear, a region with more lonely people will experience lower aggregate economic growth.

The COVID-19 pandemic has brought to the fore the salience of solitude in modern societies (Smith and Lim 2020). Solitude often takes place “when a person’s social relationships are perceived by the person to be less in quantity, and especially in quality, than desired” (Encyclopaedia Britannica 2021). In this case, solitude can be equated with loneliness – a distressing experience that can lead to irritability, depression, and increases in premature deaths (Cacioppo and Cacioppo 2018).

Solitude may also refer to people living alone, without the company of family and friends. Living alone normally lacks the negative connotations associated with loneliness (Kurutz 2012). Increasingly, individuals live alone not because they are forced to but out of choice (Wilkinson 2014). In the so-called ‘second demographic transition’ (Van De Kaa 1987), the archetypal profile of the elderly citizen living alone was replaced by that of an adult professional, often a woman, with high levels of education and stable employment. However, in times like the current Covid pandemic, which are characterised by forced or self-isolation, the life satisfaction of people living alone can decrease (Hamermesh 2020). This may have implications for aggregate economic activity.

Generally, being lonely and living alone describe different states of mind and can represent different attitudes towards life, leading to diverse aggregate economic outcomes. Factors like the greater participation of women in the labour force, increased life expectancy, and urbanisation are pushing more and more people to live alone. The share of individuals living alone has consequently been rising for some time (Sandström and Karlsson 2019). But living alone does not necessarily mean that individuals are lonely. Lonely individuals often feel isolated, indicating an emotional detachment from others and society, whereas many of those living alone lack this emotional detachment and lead vibrant social lives. They frequently compensate for the lack of in-person interaction within the household with a wide network of interpersonal face-to-face and digital relationships outside it.

When they are combined, these two dimensions of solitude may have detrimental implications from a purely economic perspective. First, more people feeling lonely and/or living alone may reduce the number of interpersonal and face-to-face interactions at the heart of the development of new ideas and innovation (Storper and Venables 2004). Second, many people affected by solitude may shy away from engaging in economic activities. Third, different forms of solitude may undermine trust and prevent the formation of bridging social capital, which has been identified as an important factor for regional economic growth (Muringani et al. 2021). Yet living alone is costly, and those living alone require considerable economic resources to finance the costs of properties and rents. This may somewhat counterbalance the potential negative economic effects of the rise in solitude across the developed world.

We investigate the effects of living alone and being lonely on economic growth across 139 regions of Europe in the period before the outbreak of the COVID-19 pandemic (Burlina and Rodriguez-Pose 2021). Our study considers three main measures of solitude: the share of people living alone on the overall population; a sociability index as a proxy for loneliness, covering the degree of interaction within a region measured by the number of in-person meetings for social purposes, regardless of frequency; and the frequency of personal interactions (ranging from daily social meetings to never meeting anyone else for social purposes).

The European geography of these different forms of solitude is extremely variegated. Figure 1 shows the geographical distribution of (a) the share of individuals living alone, and (b) the sociability index. The share of individuals living alone is far higher in Nordic countries and in Central Europe than in Iberia and Eastern Europe. National borders are in clear evidence and there is a marked rural/urban divide.

The geography of sociability/loneliness is more intricate. Southern countries such as Spain and Portugal have a higher degree of sociability. But high levels of sociability are also in evidence in other countries, such as France, the UK, and Sweden. There are strong regional variations within countries – differences in sociability between Schleswig-Holstein and Baden-Württemberg, for example – and no clearly discernible urban/rural, city/town patterns. Many of the regions with a high concentration of people living alone – such as Brussels, most UK regions, Franche-Comté in France, or Schleswig-Holstein in Germany – also have a high sociability index. 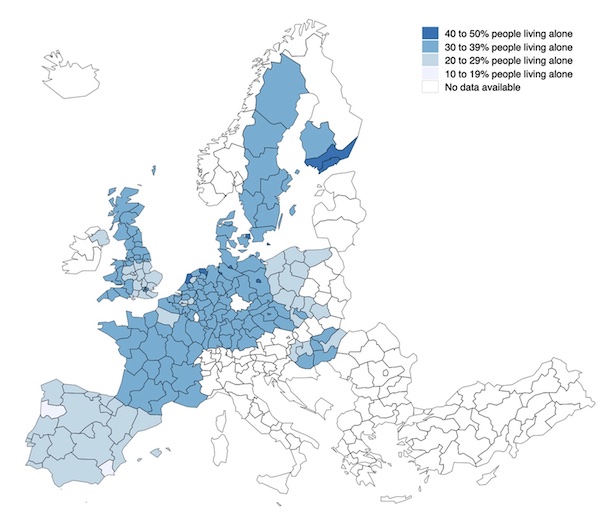 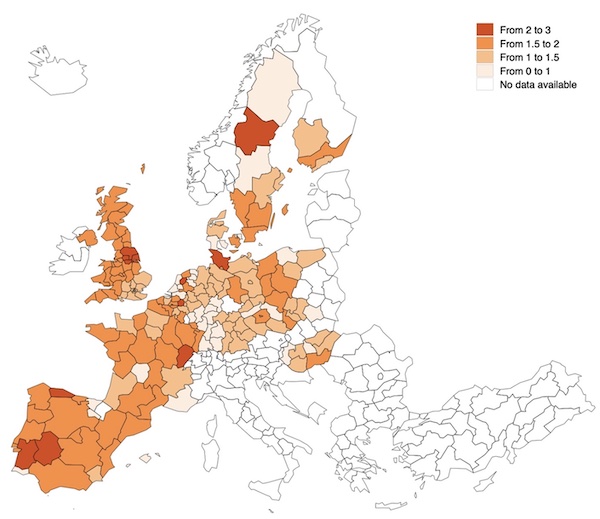 Sociability Drives Growth, but the Relationship between Loneliness and Growth is More Complex

Though the rise of solitude has potentially pernicious health, mental health, and social consequences, it does not pose the same threat from an economic perspective. Greater shares of people living alone contribute to driving economic growth across European regions. The increasing number of people choosing to live alone – rather than being forced to by external circumstances – can boost economic growth, provided they remain active in the labour force and willing to network and interact with others.

The rise in loneliness, by contrast, has damaging economic consequences on the whole. A society with greater numbers of people feeling lonely has a more limited capacity to generate additional wealth. The connection between loneliness and economic growth, however, depends on factors such as the frequency of meetings between people. Too much interaction, such as the prevalence of daily meetings, can undermine the benefits of in-person exchanges. Societies where a large share of individuals meet on a less than weekly basis are also less likely to grow. The ‘sweet spot’ seems to be large shares of the population meeting with friends, relatives, and co-workers on average on a weekly basis.

COVID-19 is bound to accelerate the rise of different forms of solitude (Hamermesh 2020, Belot et al. 2020), necessitating a greater need for policies that mitigate its negative effects. It is not always clear how governments and administrations should intervene in areas that belong in the sphere of the individual; any form of solitude can be the result of personal choice. However, the fact that the economic consequences of rising solitude can be felt not just at the individual, but also at the aggregate level demands greater policy consideration. Policies such as facilitating choice in the case of living alone are already on the table in some countries. Greater intervention may also be required in order to combat the ‘loneliness epidemic’. In any case, searching for solutions will require addressing the roots of rising solitude to prevent or minimise its negative collective health, well-being, social, and economic consequences.