Police in Norway on Sunday reported dozens of disturbances and violent clashes including mass brawls in the Nordic country’s big cities after streets, bars, restaurants and nightclubs were filled with people. Long lines were seen outside Oslo’s nightclubs, bars and restaurants late Saturday and police registered at least 50 fights and disturbances during the night.

Neither vaccination status certificates nor negative test results are required to enter such venues in Norway. 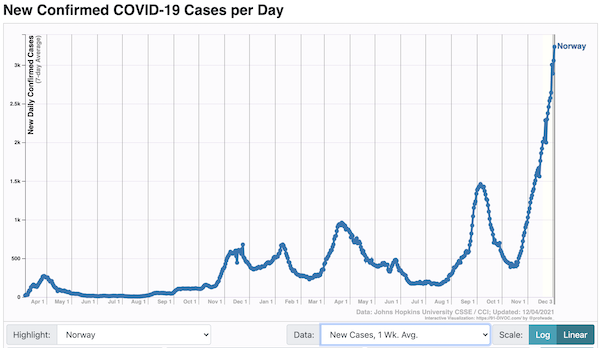 Most of these cases are Delta, but now surely some are Omicron:

Before Scatec AS A, a Norway-based renewable-energy company, hosted the annual holiday party [on November 26], it took all the major safety precautions, said Stian Tvede Karlsen, a company spokesman. Only vaccinated employees were invited. All had to take a rapid test the day before. The party, at Louise, an upscale Oslo restaurant serving seafood and Scandinavian fare, included about 120 people, several of whom had just returned from South Africa, where the company has a solar-panel project.

More than half of those present have since tested positive for Covid-19, with at least 13 confirmed to have the new variant in what appears to be the world’s biggest Omicron outbreak outside southern Africa—and a glimpse into how it fares in a highly-vaccinated population.

The Oslo municipal health department said it expects more Omicron cases to be confirmed among the 64 Covid-19 cases as medical workers test the remaining patients.

The cluster is remarkable because it took place in a bubble of immunized people, in a country where more than 80% of adults are fully vaccinated.

An hourslong party with lots of guests talking to each other in a closed, indoor and insulated environment would make for an ideal superspreader event, even for earlier variants of the coronavirus, said Alexandra Phelan, an assistant professor of global and public-health law and ethics at Georgetown University.

And so Norway’s normal has become the abnormal once again:

From Friday morning, mask mandates that had been lifted are back in place, private indoor gatherings are limited to fewer than 100 people, office workers are encouraged to work from home, and bars are operating at reduced capacity.

The capital, Oslo, has canceled a major Christmas gathering and other holiday events are being called off as well.

(Of course, it’s hard to imagine the United States doing any of these things when our time comes.) In this post, I’m going to unpack the notion of superspreading (and superspreaders)[1]. This may help you gracefully bow out from your office Christmas Party, if you have one (I don’t, and I can tell you I don’t miss them a bit). Superspreading also has implications for the Biden Administration’s Vax Only policy, as we shall see.

Here is Nature’s image of a prime venue for a superspreading event: 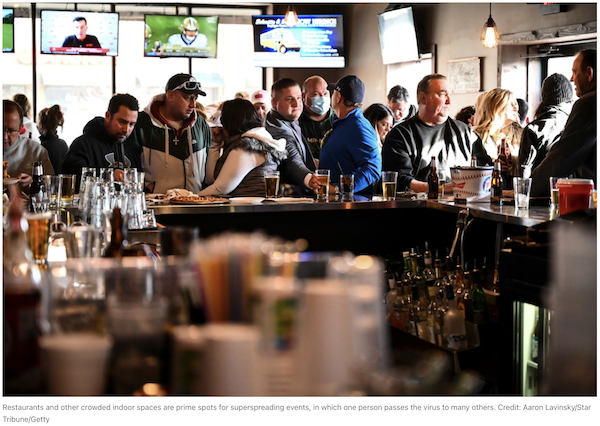 And here is an image of Louise[2], the Oslo restaurant where the superspreading event took place: 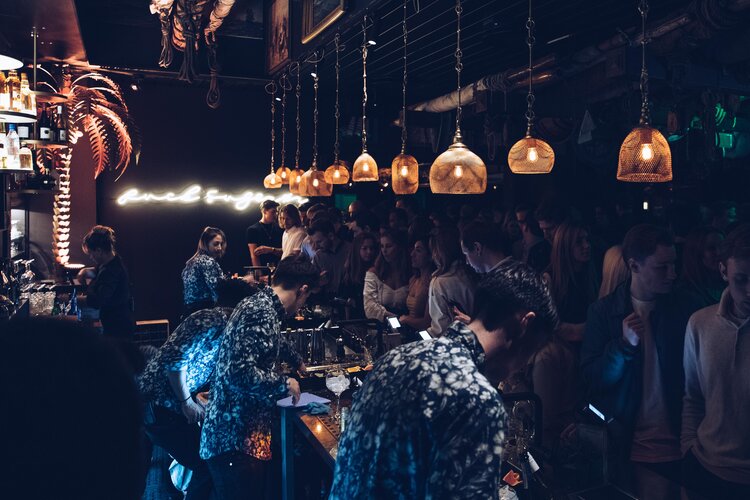 Note the similarities. (The scene from Louise is a dance, not a Christmas Party, but 120 people would still make a crowd.) Perhaps the best way to summarize them is to say that both venues violate the Japanese commonsense guidelines for avoiding Covid: the 3 C’s: 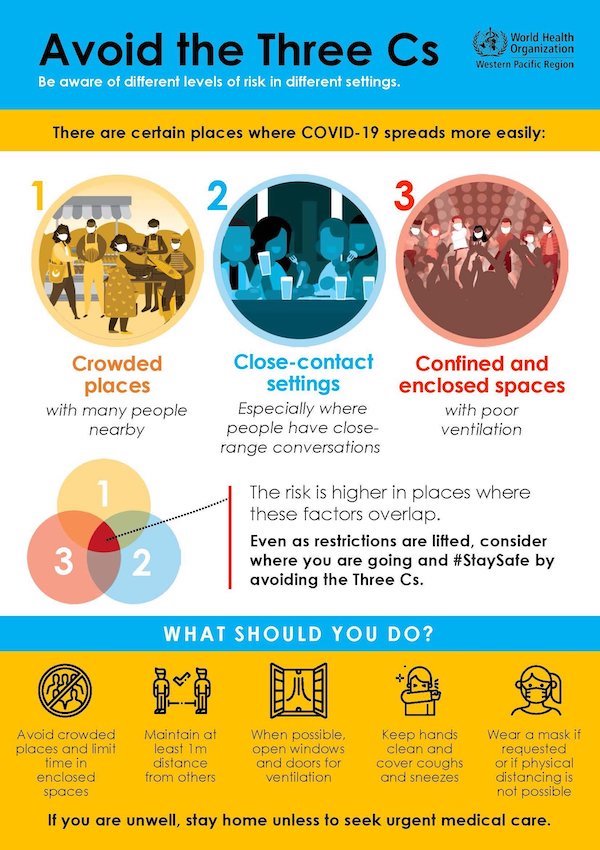 Avoiding Crowded places, Close contact settings, and Confined and enclosed spaces — like company Christmas parties at restaurants or bars — are key tactics to achieve one strategic objective: since Covid is airborne, don’t share air.[3] As public health Ontario writes in “COVID-19 Transmission Through Large Respiratory Droplets and Aerosols… What We Know So Far“:

Indoor settings are a predominant risk factor for transmission. In a systematic review of 5 studies, Bulfone et al. (2020) reported that the odds of indoor transmission were 18.7 times (95% confidence interval [CI]: 6.0–57.9) higher than outdoor settings, and less than 10% of infections occurred outdoors. Very few superspreading events have been described from exclusively outdoor exposures. The explanation for this observation is likely multifactorial which includes important differences in ventilation, UV light, humidity, as well as possible differences in behaviour.

Nature, “Superspreading drives the COVID pandemic — and could help to tame it“:

With a year’s worth of data, researchers have amassed ample evidence of some chief ingredients of superspreading events: prolonged indoor gatherings with poor ventilation. Activities such as singing and aerobic exercise, which produce many of the tiny infectious droplets that can be inhaled by others, are also common components.

From El Pais, in “A room, a bar and a classroom: how the coronavirus is spread through the air” (modeled by atmospheric chemist José Luis Jiménez):

But we now know that shouting and singing in indoor, poorly ventilated spaces over a prolonged period of time also increases the risk of contagion. This is because speaking in a loud voice releases 50 times more virus-laden particles than when we don’t speak at all. These aerosols, if not diffused through ventilation, become increasingly concentrated, which increases the risk of infection. Scientists have shown that these particles – which we also release into the atmosphere when simply breathing and which can escape from improperly worn face masks – can infect people who spend more than a few minutes within a five-meter radius of an infected person, depending on the length of time and the nature of the interaction.

So, absent global eradication and with air travel, Prime Minister Erna Solberg’s “return to normal” — that is, vaccination without layered defenses — was bound to produce a superspreading event at some point, given humanity’s laudable impulse for conviviality[4]. I believe it was Lake Wobegone’s Pastor Ingqvist who asked the question: “If you didn’t want to go to Milwaukee, why did you get on the train?” Why, indeed.

Having, I hope, given you the tools to resist or at least assess entreaties to party on during the holiday season, let’s now turn to the policy implications of the Oslo superspreading Omicron event for the United States.

As readers know, the Biden Administration has been pursuing what might be called a “Vax Only” Covid policy; non-pharmaceutical interventions are consistently ignored or demeaned[5], and even treatment plays a distinctly subsidiary role. Here are some implications of the Oslo Omicron superspreader event for that policy.

First, it is true that the Administration and have long since abandoned the notion that the vaccines are sterilizing, and with it, the notion that “you are protected,” as Biden and Walensky both put it. The CDC’s study of “Bear Week” in Provincetown showed that both vaccinated and unvaccinated carried similar nasal loads of the virus, and hence, presumably, transmitted in equal measure. Nevertheless, even though Fauci and other spokesholes have long since moved the goalposts of preventing transmission off the field entirely, 80% infection in a population (n = 120) that is 100% vaccinated must give pause. As the Wall Street Journal writes, given that some of those infected at Louise carried Omicron:

“The big question that this is starting to add data to, at least anecdotal data, is immune evasion,” said Alexandra Phelan, an assistant professor of global and public-health law and ethics at Georgetown University.

Here is one more anecdote on immune evasion:

6 out of 11 confirmed #Omicron cases in Israel so far are triple vaccinated with Pfizer. https://t.co/0xvb0D83a6

Translating, our mediocre-by-world-standards 59.1% “fully” (doubly) vaccinated could, for all practical purposes, become 0%, if Omicron ends up dominating Delta. It’s very hard for me to think through the political implications of this, other than a Jackpot-like collapse in public trust not only in the public health institutions, but in existing institutions generally. I’ve never seen charts on public trust with a vertical axis that includes negative numbers; perhaps the pollsters should get ready.

Now, the current line is that Omicron infections are “mild” (examples too numerous too mention). After all, ubiquitous transmission doesn’t matter if nobody gets really sick! Of course, this argument is entirely disingenuous; most Covid infections are “mild” already. The real issue is the absolute number of people who are hospitalized; leaving human suffering and death aside, that’s the number to watch to see if the health care system gets overwhelmed. And since all indications are that Omicron is more transmissible than Delta, and if it is indeed immune evasive, we can expect those absolute numbers to be larger than the last wave.

Of course, so far, we don’t have good data that would prove, as opposed to handwave, that in the aggregate Omicron is mild, certainly not in Oslo. From Reuters:

“None of the patients has severe symptoms; none is hospitalised. However, this is not unexpected given the young age of the participants.”

“It is still too early to say whether the clinical picture of the disease is different in Omicron infections than in Delta infections,” [Preben Aavitsland, a senior physician at the Norwegian Institute of Public Health,] said.

“None of the patients has severe symptoms; none is hospitalised. However, this is not unexpected given the young age of the participants.”

Covid-19 hospitalizations are rising rapidly in a populous South African province where the new omicron variant of the coronavirus has been detected.

The South Africa diseases institute, part of the group of researchers and government institutions that first reported the variant to the World Health Organization, said in a statement that omicron cases were found in Gauteng at “a relatively high frequency.”

Finally, even if we grant that Omicron is “mild” in clinical terms, Vax Only takes no account of Long Covid. Vax Only also assumes that the next variant — being bred, even now, in some immuno-compromised pocket; perhaps a homeless camp in California — will also be mild.

In short, the Biden Administration’s Vax Only policy is, at a minimum, insanely risky. In a sane world, we’d have a layered system of defenses, including non-pharmaceutical interventions like ventilation, to protect us until pharmaceutical interventions or treatments can be found. We have none of that; the Biden administration has, in fact, systematically ignored or demeaned NPIs. We are playing Biden Roulette. We have put all our chips on one number. Unfortunately, Covid (and evolution) are the House. And the wheel keeps spinning.

[1] I will refrain from riding my hobbyhorse, air travel. Obviously, if the two Scatec employees had not flown to South Africa and back, they would not have carried Omicron with them to Oslo. Further, if they had been quarantined for two weeks, they would not have spread it. But business travel is important! Indeed, and more than human lives, apparently. It would be nice if we could all be as honest and upfront about these issues as Texas Lieutenant Governor Dan Patrick.

[2] I don’t blame the venue. Official guidance on how to avoid superspreading events has been woefully inadequate, partly because of WHO and CDC’s unwillingness to make anything more than vague verbal gestures toward aerosol transmission.

[3] Masking, ventilation, and keeping interactions short are additional tactics, but they all presuppose entering a non-3C venue in the first place. Ditto bubbles. How much of other people’s are you are breathing is known as the “rebreath fraction.” From the Washington Post:

A critical figure, [Richard Corsi, an indoor air quality expert at Portland State University] says, is the “rebreathe fraction,” which refers to the percentage of the air you breathe in that others in the same indoor space recently breathed out. For instance, he has calculated that when the indoor concentration of carbon dioxide reaches 800 parts per million, then each time you breathe in, one percent of the air you inhale has come from the exhalations of others. During a pandemic, that’s an alarming thought.

[4] That’s how I describe matters on a good day. On a bad day, I say that “extroverts are gonna kill us all.”

[5] The policy seems not merely to be “Vax Only,” but these vaccinations only; there’s no talk, for example, of an Operation Warp Speed-like approach to develop nasal vaccines, which hold out the promise of being sterilizing.