Yves here. It’s disheartening to see yet another article treat inflation in the US as something that can be tamed by interest rates. The Fed using its brakes is instead more likely to reduce growth without doing much to remedy inflation.

One of the big inflation drivers is energy costs, which are up due to Covid whipsawing demand, and some producers, particularly in the oil arena, not being able to turn on a dime. The auto industry chip shortage has improved but is not fully over. Food is another category where prices are up, and that’s due to many factors: poor harvests, high fuel costs, trucker shortages, and higher labor costs. The Fed can’t fix any of those.

The usual economists’ assumption, that higher prices will elicit more supply, isn’t working for US workers. A big reason is many who have real estate and/or stock market gains and face Covid risk in their jobs have decided to pack it in. Even for lower paid-hourly workers, many have decided to shift to less risky work or cut back hours because they see employers as not paying enough for them to endanger their health (and not backing workers in keeping unmasked patrons out and improving ventilation). The Fed playing with interest rate dials won’t have any impact on this dynamic.

But the wee problem is that this article, which uses the sort of models the Fed uses, shows that US inflation will stay high-ish by recent standards, which means the central bank thinks it must Do Something despite its impotence with respect to this bout of inflation. Also note the angst despite quite a few economists saying during the years of the dread Secular Stagnation that an inflation target of 2% to 4% would be better for groaf than 2%.

And don’t get me started on the model assumptions.

The Federal Reserve has recently changed monetary stance and signalled a faster than anticipated pace of monetary tightening, while the ECB is more dovish. This column applies a statistical model to recent data on oil prices, inflation, expectations, labour markets and output, and finds that the model’s forecasts support the difference in stance of the two central banks. Based on an assessment of cyclical inflation being mostly driven by transitory energy price disturbances and a very small Phillips curve contribution in both jurisdictions, it predicts that in a year from now euro area HICP inflation will still be below the 2% target, at 1.75%, while in the US CPI inflation will be above, at 2.75%.

Inflation is the topic of the day. In the US, the Federal Reserve has recently changed monetary stance and signalled a faster pace of monetary tightening than had been anticipated. The ECB is more dovish, but a change in its assessment of inflation risks was expressed in the announcement following its December policy meeting along with a forecast that inflation will remain elevated throughout 2022. Yet, the two central banks continue to regard the current bout of inflation, although more persistent than expected, as temporary.

Is this view consistent with the data?  How high is the risk that the rise in inflation may dis-anchor expectations and threaten price stability?

From this perspective, if central bankers say that the current inflation is transitory, they presumably mean that the trend component of inflation is at the target rate – i.e. around 2% – and they expect the inflationary pressure to abate even without policy intervention.  Although the two cyclical components – the Philipps curve and energy price disturbances – are temporary, there is a danger that they can destabilise inflation if they affect long-run expectations.  In particular, oil shocks have historically induced surges of inflation expectations, and are thought to be able to dis-anchor consumers’ and price setters’ expectations (Coibion and Gorodnichenko 2015, Coibion et al. 2018).

How can we determine the current level of the trend component of inflation?  We look at the data through the lens of a statistical model proposed by Hasenzagl et al. (2020, 2021). This model is an attempt to characterise in a stylised way the conventional view of inflation described above.

The model defines the trend as the component of inflation that is not due to cyclical components and that is reflected in professionals’ and consumers’ medium-term forecasts of inflation (see Figure 1).

Figure 1 Trend inflation in the US and euro area (%, monthly, year-on-year, not seasonally adjusted) 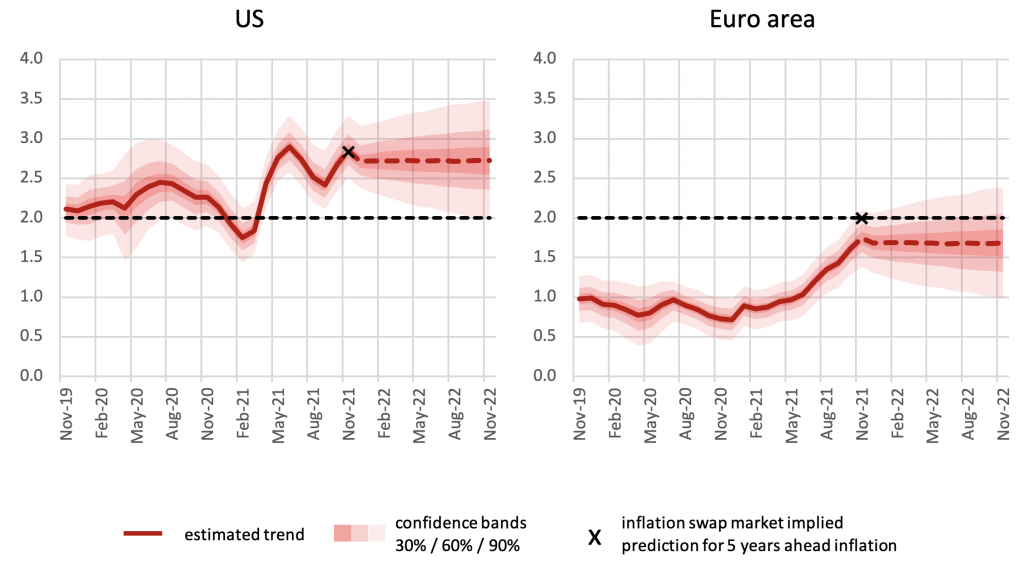 The model suggests that, since the onset of the pandemic, the trend component of inflation has risen in both the US and the euro area by a similar amount – approximately 75 basis points. However, in the US, this rise has taken the trend well above the 2% target, whereas in the euro area it is still slightly below the target, at 1.7%.

This observation gives us some comfort about the ability of our trend estimates to pin down long-term expectations. The difference between the US and the euro area also suggests that the Fed and the ECB can and should respond differently to the inflationary threat – as indeed they are doing. While in the US the inflationary pressure may have pushed the underlying inflation rate above the desired target, in the euro area it seems that inflation is still anchored below the policy target.

Oil Prices and the Cyclical Components

Figure 2 shows the model’s estimate of the recent and future evolution of the cyclical components of inflation: the business cycle (Phillips curve) component, the energy price component, and an idiosyncratic one. The latter may be seen as a measure of what the model cannot explain (and is indeed very small). 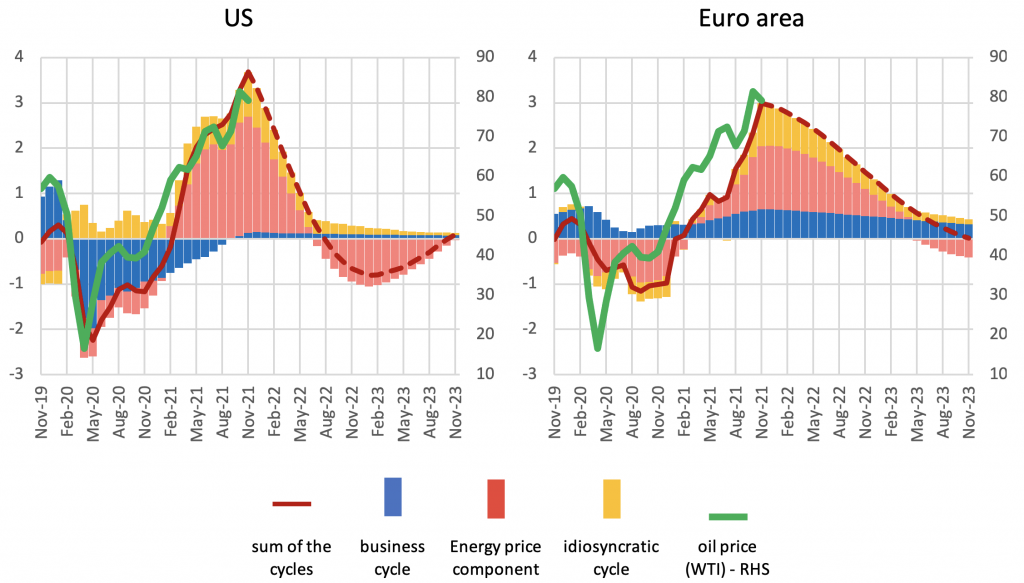 The model interprets a large part of the increase in inflation over the past 18 months in both the US and the euro area as a cyclical phenomenon – but it attributes it largely to the rise in energy prices (the red bars).  Consequently, the model predicts that inflation will decline in the coming months as the pressure from energy prices turns.

In the US, the energy price component dominates, while the real economy has little impact. By contrast, in the euro area relatively strong growth is seen to be helping to sustain the recent rise in inflation and causing its decline to be slower.  This may be surprising, given that real GDP growth in the US has remained relatively strong since the post-pandemic rebound in the second half of 2020, whereas growth has been more volatile in Europe and is now apparently on a weaker path (see Figure 3).  However, what matters is growth relative to trend – i.e. the output gap – and the model estimates a closing output gap with the American economy nearly back to its potential growth rate. Conversely, it estimates that the European economy has probably seen a reduction to its potential and hence it may be above trend growth (see Figure 4).  Hence the impact of the Phillips curve in the US is negligible whereas in the Euro area it contributes some upward pressure on inflation until at least 2023.

Figure 3 Latest official estimates and current Now-Casting predictions of quarterly GDP growth for the US and euro area (quarter-on-quarter, %, annualized) 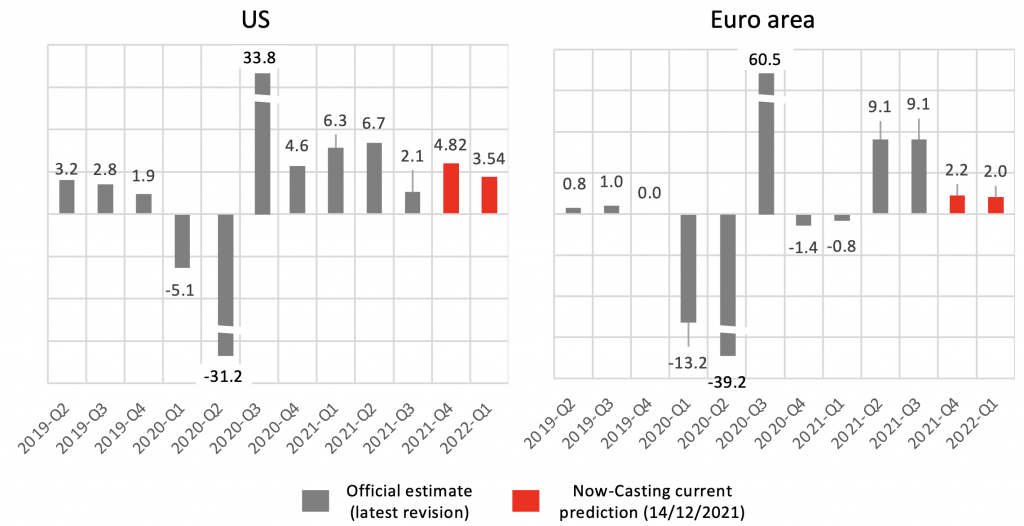 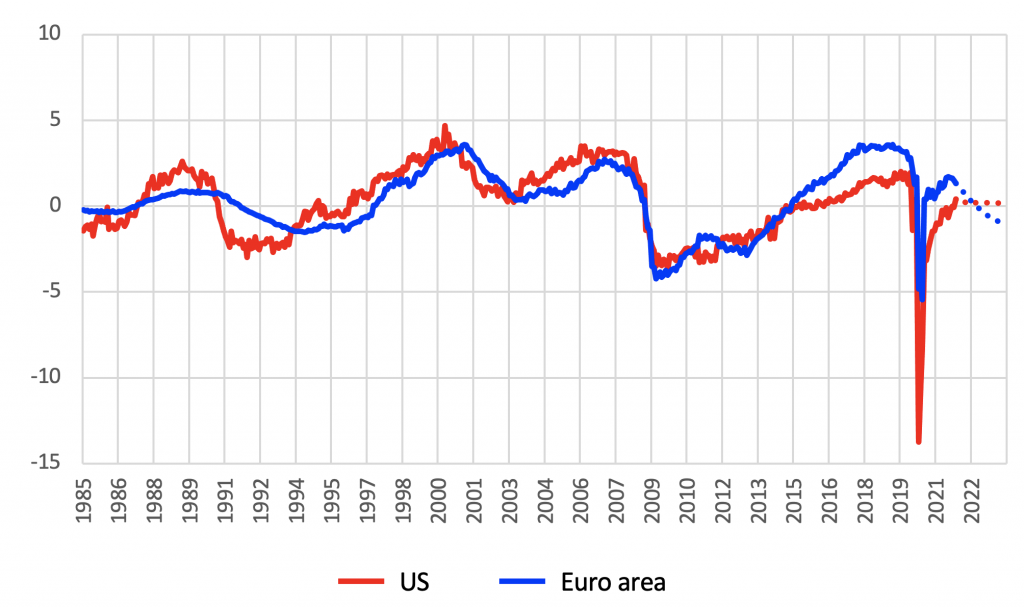 In interpreting these results, one must be aware that there is substantial uncertainty over the size and stability of the Phillips curve but also on the estimates of trend growth.

The model view that we have just outlined is driven by two features. First, the estimates of output potential can absorb a persistent component due to shocks in the real economy – akin to hysteresis effects – and, as a consequence, the model tends to attribute less importance to cyclical variations. This is particularly true in the euro area, where the trend is revised downward, and the model is not projecting a return to the pre-pandemic trend over the next year. Second, energy prices enter the Phillips curve via mark-ups and the output gap, as in most macroeconomic models, but also have a purely expectation-driven component which is highly correlated with consumer expectations (this is in line with Coibion and Gorodnichenko 2015).

The model view of the output gap differs from official estimates for both the US and the euro area. In the US, the Congressional Budget sees a stable trend and an output gap which has been negative for more than a decade. In the euro area, again as a consequence of estimating a stable output trend, the European Commission sees a smaller output gap than our model does.

But even remaining agnostic on specific features of the cyclical decomposition, the model, by attributing the bulk of the increases in prices to a cyclical component, and in particular to energy price disturbances, orthogonal to real economic activity, appears to be consistent with past regularities. Notice that the model-based, expectation-driven oil component of the cycle is highly correlated with observed oil prices rescaled (see Figure 2), which suggests that the Phillips curve has had a minor role in cyclical inflation since 2019.

A pressing question is whether the model – albeit supported by historical regularities – may be missing a shift in expectations due to the effect of oil prices and the lack of a strong enough policy response.

A possible way to address this question is to examine the forecast errors made by the model in forecasting consumer expectations.  Systematic negative errors would suggest a ‘bias’ in the model and possibly the drifting of inflation expectations off the target. The fact that the model has not made systematic errors in forecasting consumer inflation expectations (Figure 5) suggests no breakdown of past historical correlations and hence no strong sign of dis-anchoring (beyond that already discussed in relation to the US, where trend inflation is estimated to be 75 basis points above the target). 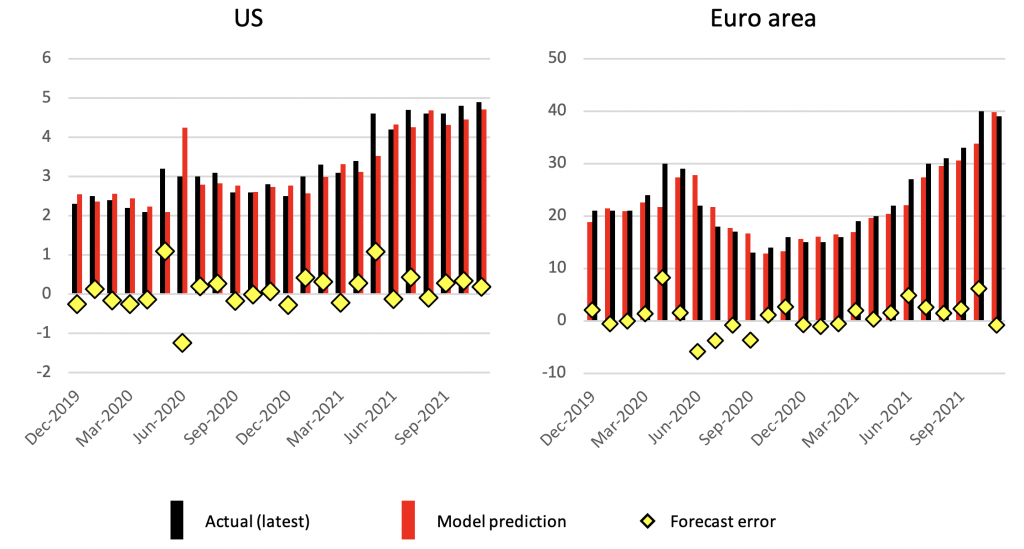 Putting together the trend and the cyclical components, we get the model’s prediction for headline inflation. In both the US and the euro area, the model predicts a cyclically dominated decline in headline inflation over the next 12 months. As we have seen, this is mainly explained by the energy cycle. Due to weaker Phillips curve pressure, the model predicts a faster decline in the US inflation rate than that for the euro area.

Figure 6 The recent path of headline CPI/HICP (monthly, year-on-year %, not seasonally adjusted) for the US and euro area, together with the model’s prediction for their paths over the next 24 months, and comparisons with the inflation swap market’s implied predictions for one- and two-years-ahead inflation. 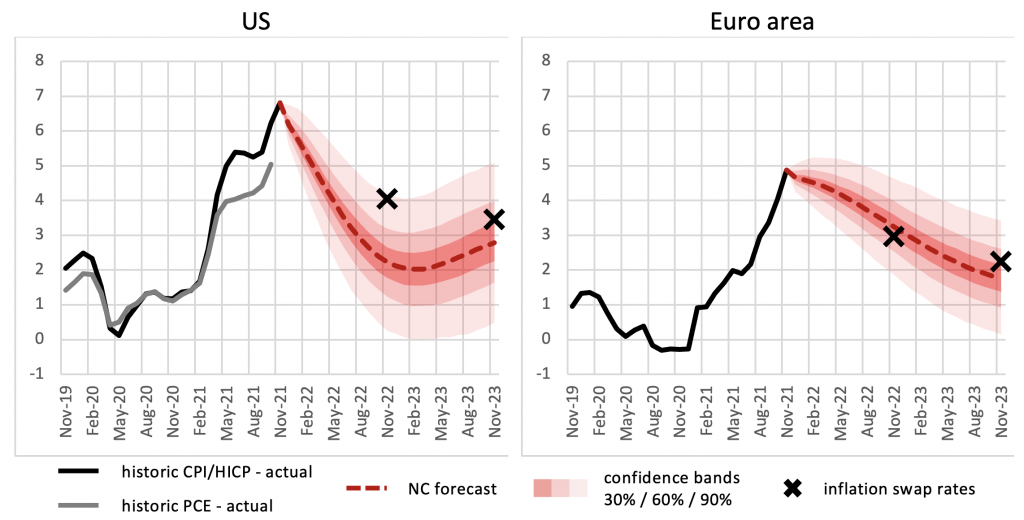 Note: The historic path of US PCE is also shown for comparison.
Sources: BEA, Eurostat and Now-Casting Economics Ltd.

Our views seem to coincide with those of the market as reflected by inflation swap rates although the swaps predict slightly higher inflation at one year horizon for the US.

Our decomposition helps us to interpret these forecasts.  It tells us that both central banks are right when they interpret current inflation as temporary, but that this view should be nuanced in different ways in the US and the euro area. In the US, as we have seen, a small but permanent increase is likely, and this implies a trend inflation rate of 2.75% in the next five years at least (assuming away unforeseeable large permanent shocks in the future).

To interpret recent policy announcements, it is useful to compare the actual price level with the price level that we would have observed had inflation been at the 2% target since the recession of 2008 (in Figure 7). 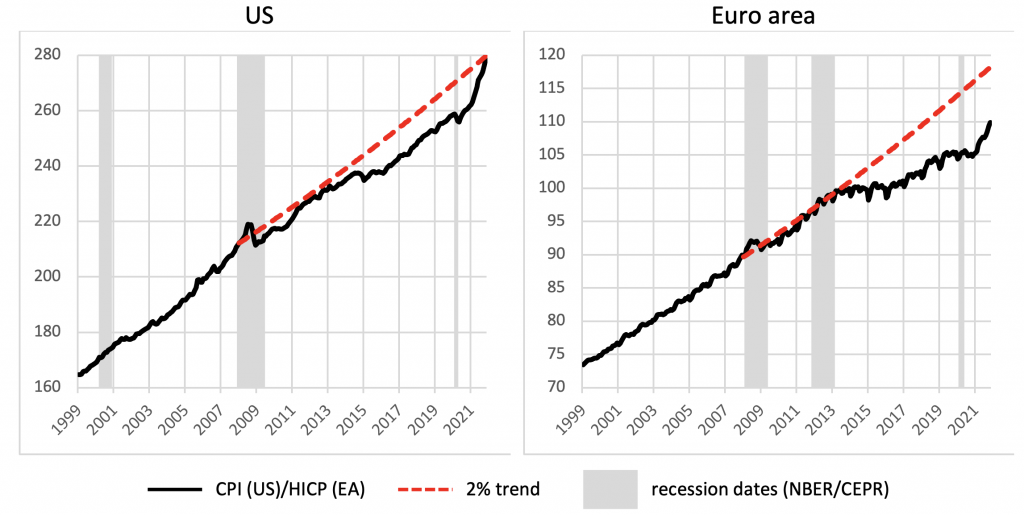 While in the US, the price level has returned to the level implied by the 2% target, this is not the case in the euro area. This is an additional justification for the different stance by the two central banks.