Yves here. Helmer does the useful service of providing direct quotations from Russia’s foreign minister Sergei Lavrov on how the US needs to do what it has pointedly failed to do so far in its negotiations over the festering crisis over Ukraine; provide written responses to the Russia formal position. Given America’s history of being “not agreement capable” and in particular reneging on verbal commitments to not move NATO into former Warsaw Pact countries, getting the US to make a simple and clear statement of what if anything it proposes to do would seem to be a reasonable basic step.

What will be written on the US Government’s piece of paper since the Russian Government already knows – its intelligence services know, the Solar Winds hackers know  – what was not written on the papers which Deputy Secretary of State Wendy Sherman was reading at the Geneva talks with Deputy Foreign Minister Sergei Ryabkov on Monday?

Sergei Lavrov, Russia’s Foreign Minister, announced on Thursday evening the US should now produce on paper its proposals for reducing the risk of war. Or else, Lavrov also told Antony Blinken, the US Secretary of State, the US will have war with Russia. Enough “arrogance of the highest degree”, and “foaming at the mouth”, Lavrov told Blinken. That “the Secretary of State of a serious state  [солидного государства] declares such things” is –  Lavrov left the expletive unsaid.

“We hope that the promises made now in Geneva and Brussels will be fulfilled. They concerned the fact that the United States and NATO would put their proposals ‘on paper’. We have clearly and repeatedly explained to them that we need to have an article-by-article reaction to our documents. If some position is not suitable, let them explain why and write ‘on paper’. If it is suitable with amendments, then they should also be done in writing. If they want to exclude or add something – a similar request. We gave our thoughts in writing a month ago. There was plenty of time in Washington and Brussels. Both of them promised that they would put their reaction ‘on paper’.”

Lavrov was waving the American piece of paper to remind that the piece of paper which British Prime Minister Neville Chamberlain displayed on September 30, 1938 (lead image), on his return from talks with German Chancellor Adolph Hitler, contained the line expressing “the desire of our two peoples never to go to war with one another again”. That turned out to be false – Hitler didn’t mean it; Chamberlain wasn’t sure but wanted his electorate to believe it, plus time to prepare.

Lavrov is announcing that Russia today knows the US intention is to go to war; and that Russia is prepared and is already on war footing on all fronts.

That Sherman told Ryabkov on Monday “the United States and Russia agree that a nuclear war can never be won and must never be fought” is just as false, Lavrov has now declared —  unless what follows is Sherman’s paper. On that paper there must be “legal guarantees of non-expansion of NATO to the East, legal guarantees of non-deployment of shock [nuclear] weapons in our neighbouring territories that pose a threat to Russia’s security, and in principle, the return of the configuration of the European security architecture to 1997,  when the Russia-NATO Founding Act was signed. On its basis, the Russia-NATO Council was subsequently created. These are three key requirements. The rest of the proposals depend on how the conversation goes on these three initiatives.”

Lavrov’s declaration also dismissed as empty the attempts to intervene in the Russia-US negotiations  by Jens Stoltenberg, the NATO secretary-general now approaching the end of his term; and  Josep Borrell, the Europe Union foreign minister from Spain. Stoltenberg, Lavrov said, was “shaking the air”. Borell had been “emotional and not very polite”.

Lavrov’s spokesman, Maria Zakharova, followed at her briefing on Thursday by remarking: “It seems that there are two J. Borrells: one is the one who speaks, and the second is the one who writes. Or one J.Borrell, who speaks, but other people write for him. Both in style, and in language, and in the expressions used, these texts do not belong to one person. It’s obvious.”

The only interlocutor left in Europe Lavrov identified as serious is France. Germany went unmentioned; the British were not to be believed, Lavrov commented; the US Senate is  suffering from a “nervous breakdown… a psychological point that’s difficult to explain.”

In her press briefing after the Geneva talks on Monday, Sherman had spelled out eight points of seeming convergence between the two states. She also claimed she knew what was on Ryakov’s paper: “Minister Ryabkov and I know each other very well.  We worked on the Syria chemical weapons deal together.  We worked on the Joint Comprehensive Plan of Action [Iran] together.  We’ve obviously now worked on the SSD  [Strategic Stability Dialogue] in my role as deputy secretary of state.  We know each other very, very well.  So we can be very straight-up with each other to the extent that we can be, knowing that we are here for our national interests and are very loyal to those national interests.”

Lavrov reversed Sherman’s claim with its own echo. “We know the American negotiators quite well. We have met with them many times on various occasions, including negotiations on the Iranian nuclear program and the START-3 Treaty. They roughly understood what the conversation would be. It was fundamentally important for us to fulfill the direct instructions of Russian President Vladimir Putin. He said that we are obliged to put these issues concerning the entire architecture of European security in the strictest way. There is not only Russia’s unilateral demand not to strike it and not to do anything that causes us dissatisfaction, but also principles aimed at ensuring the security of everyone without infringing on someone’s interests and without harming the security of anyone.”

Lavrov explicitly dismissed Sherman’s attempt to dictate Russia’s national interests on Russian soil in demanding the withdrawal of troops exercising in the west and south back to their barracks. “I don’t think there is a need to explain the absolute unacceptability of such requirements. We will not discuss them.”

Also unmentioned is the withdrawal of about 10,000 Russian troops to their barracks, announced by the Russian Army on December 25-26. So far there has been neither US acknowledgement nor reciprocal response.

“We will continue the standby mode, but it cannot be long,” Lavrov warned this concession is temporary. “We are used to starting from the cruel reality,” he added. “It consists in the fact that we are promised a written response. We will wait for it and then we will determine our next steps. As for optimism, we have such a proverb: ‘Who is a pessimist? A pessimist is a well-informed optimist.’”

Zakharova concluded her briefing: “We are already waiting now for the specifics, and not peering into their emotional mood and feelings. We are waiting for an answer from them.”

The specifics on the US paper already appear to be non-reciprocal and for that reason are non-starters, Lavrov and Zakharova emphasized. Lavrov identified the refusal of the US and NATO to withdraw “deployment of substantial combat forces on a permanent basis on the territory of the new members”; and the US and allied rejection of mutual verification of nuclear warhead installations in Romania and Poland. As for the dual-capable Aegis missiles, Lavrov said their deployment on ground or at sea cannot be a temporary arrangement.  “The initiative not to deploy shock weapons near the borders of Russia – this is a useful thing, but apart from the main requirement of non-expansion of NATO to the East, it is unlikely to be of significant importance.”

Lavrov omitted to mention nuclear-armed US Navy operations in the Baltic and Black Seas. If there are to be confidence building measures on these fronts, the Russian side will be watching the Bosphorus Straits in the coming days to see if the number of US Navy and other NATO vessels moving north into the Black Sea appears to drop by comparison with last year.  A Turkish Navy website makes it possible for everyone to observe.

Source: Foreign Warships On Bosphorus in 2022 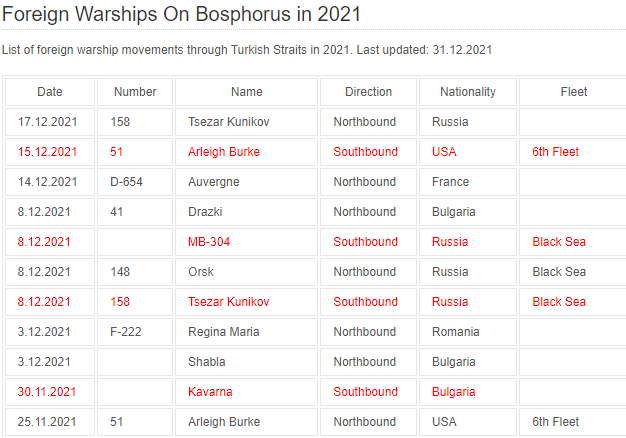 Zakharova spelled out the specifics of ongoing US reinforcement of Ukrainian forces and escalation of attack capabilities on the Donbass front. “This year they plan to hold a number of joint military exercises, the scale of which will be many times larger than in the past.  As it became known from reports, including the media, contrary to the declared desire of the US authorities to contribute to the peaceful settlement of the conflict, at the end of December 2021, Washington approved the allocation of an additional $ 200 million to Kiev for the supply of ammunition, electronic warfare equipment, lethal weapons to Ukraine. In addition, a group of Republicans submitted to the lower house of Congress a bill ‘On guarantees of Ukraine’s independence through strengthening its defense capability’, providing for the allocation of another $450 million to Kiev, of which $100 million should go to the purchase of air defense equipment/missile defense and warships. It is also planned to expand the range of weapons supplied…”

Sherman said she had told Ryabkov “we believe genuine progress can only take place in a climate of de-escalation, not escalation.  If Russia stays at the table and takes concrete steps to de-escalate tensions, we believe we can achieve progress.”

The response from Moscow on Thursday is that this is as empty and false as the piece of paper Hitler gave Chamberlain.  Lavrov and Zakharova are saying they know the American intention and they aren’t pretending to be Chamberlain.

They have also requested the Americans be more punctual than the Germans. Lavrov has set a deadline for delivery of the paper of one week; he didn’t say if it’s a calendar or work week.