Yves here. On the one hand, Tom Neuburger gives a very good list of the various forces that are seeking to foment disorder in the US, whether violent, disruptive, or further institutional capturing/hollowing out. On the other, calling it a war is not consistent with the description he provides. Wars and revolutions usually have two sides, or at worst, such as in the Balkans, three ethic groups. Various interests may have slippery loyalties, as we saw with the various jihadists in the Middle East, or may be excellent fighters with clear interests struggling to find reliable bigger dog allies, like the Kurds. But the pattern for a war is one group versus another, even if the composition of those groups isn’t stable over time.

In other words, the coming time looks a lot like the sort favored by Lord Petyr Baelish: “Chaos is a ladder.” But he wound up dead.

And I have to beg to differ with his take on China. Your humble blogger is no China booster. But China appears to be buying a lot of loyalty from its citizens (as well as winning acceptance of an interruption in an increase in living standards) from its successful war against Covid. China will get even more internal support if our predictions prove accurate: that the West, particularly the US and UK, will pay a huge cost in chronic illnesses and shorter lifespans due to their “Let ‘er rip” policies….which will also have an economic cost.

China does have serious issues with feeding its citizens, particularly with providing access to enough potable water as that becomes a scarce resource. China has been hoovering up agricultural land in Africa and taking other measures. Whether they prove to be adequate remains to be seen. Nevertheless, China is likely to emerge a winner by default, due to the degree to which Covid accelerates the fall of the American empire. 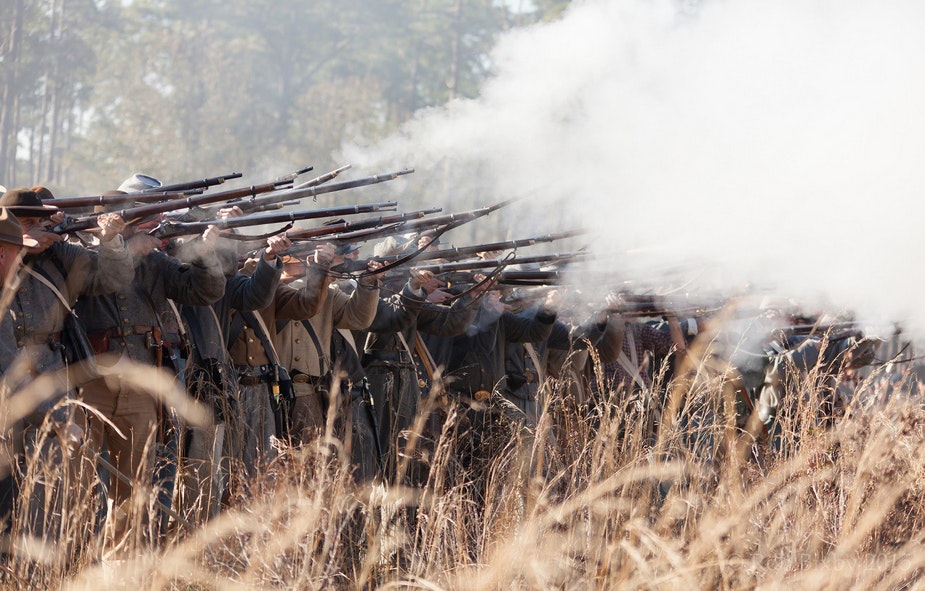 I want to expand on an idea I discussed last year (see “Biden Classifies Opposition to ‘Capitalism and Corporate Globalization’ As Extreme”), first, because one of its points was likely obscured it by other ideas in the piece, and second, to add a picture of what our “rolling civil war” will actually look like.

What Is a ‘Rolling Civil War’?

More and more, people look at the broken and breaking United States today and see some kind of civil war coming. The problem is, their picture of that war has traditional elements and parameters.

The well-armed Right imagines citizen-militias fighting police and the military in an attempt to take over the state from “liberals who hate freedom.” This picture is similar to insurgencies like Mao in China, Shining Path in Peru, or Simón Bolívar in much of South America. The implication is armies in the field, or at least guerilla fighting.

That’s not what’s happening this time. As Joe Biden correctly said: “If you think you need weapons to take on the government, you need F-15s and maybe some nuclear weapons.”

Neither the rebellious left nor the rebellious right has any of that.The reasons why the actual civil war — which has already started — has a different shape are explained below. The main reason is that it’s so badly led by the left, thanks to the status quo–protecting efforts of the Democratic Party and its professional leaders. Absent leadership by the institutional left, it’s being (mis)led by the institutional right, but not just them.Here a list of the the rolling civil war’s likely participants. Note that many of these groups are already ‘activated’:

This kind of “war” can include more than action in the streets. All kinds of resistance contributes to it. A general strike, especially if accompanied by other blocking behavior, is always part of a civil war–style revolt.

It’s better, in fact, to have the whole populace involved in the war than just a guerilla cadre — better for stating the case that resistance is called for, that is. A cadre resistance can be more successful (think of a coup), even when it’s less well supported.

As I said above, this war has already started. The first signs were political — Obama’s duplicitous ‘Yes we can’, which immediately became ‘No I won’t’; the Sanders-led rebellion of 2016; the Sanders-abandoned rebellion of 2020; and yes, the mess on Jan 6, which was a great many things, a manifestation of this being one of them.

We’ve been pre-revolutionary for a very long while. We’re watching the “pre” part slowly disappear.

What’s Coming and Why

The rolling civil war that’s brewing in this country is a messy, badly led, ideologically mixed affair, with many elements, suspect and expected alike, rebelling against all of the ways that Big Money screws most people, which is almost all of the country.

Most of the professional class, that group in the top 10% but below the top 1%, is exempt from these impulses. They still have happy lives, and the world still looks to them as it looked to their mothers and grandmothers in 1955.

They have largely no idea, for example, that police violence against the black, brown and poor among us is systemic, that it can’t be fixed by hiring better apples to replace the bad ones. Cops don’t want better apples — meaning, cops who will turn the bad cops in for their crimes. That kind of better apple gets shot in the back.

The rolling civil war in all its manifestations is what the new national security posture is concentrating to oppose — again, cheered by Resistance and MSNBC Liberals to their inevitable detriment and, after it’s too late, regret.

Where Are We Today?

As things stand today, anything is possible, good outcomes and bad. Sadly the bad seems much more likely to occur.

Biden is right: If you think you need weapons to take on the government, you need F-15s and maybe some nuclear weapons. The only way the rebellious right will take power is via their treacherous pro-corporate elected and appointed officials, people like Amy Coney Barrett, who was put on the court, according to the folks at Breaking Points, not to wage culture war, but to ensure and enhance corporate power. Obamacare, bane of the cultural right, still stands — even Coney Barret defended it — but Goldman Sachs is defended at all costs and from all sides of the supposedly divided Court.

If the rebellious Right does take power (as it’s trying to do), the rebellious left will (or certainly should) take to the streets, and the war continues, government supporting the Right with ugly force, the non-Right supporting people fighting it, with the split in the populace much as we see it today. It will become partisan chic to oppose the next Trumpist president — or it should.

The only way the rebellious Left will take power is via the almost-entirely-closed political system. The first modern chance of that was in 2008 and the duplicitous “Hope and Change” campaign of Barack Obama. But he was never that guy. He was always this guy instead. The second modern chance was the Sanders campaigns of 2016 and 2020, both ruthlessly quashed by professional Democrats, who then folded the veneer of his thought into their 2020 sales pitch. (And he, in all innocence I’m sure, let them do it.)

The Left will only take power by taking to the streets if (a) a determined leader emerges (a Sanders who won’t hand his sword to the next Joe Biden), and (b) once in office, that person cleans out and completely reforms the professional Democratic Party — or replaces it.

Odds of that happening are zero. Professional Democrats will kill the resistant Left — as they’ve regularly done — rather than surrender their power, their personal share of Establishment wealth and place.

This leaves the system exactly nowhere at all, and the suffering masses — the non-ideological soccer moms and put-upon three-job dads, the gig-working masses who shower after work and not before — with no way to hope for real change. They’ll take it till they can’t, then join whatever rebellion already exists, the one you’re seeing now.

This leaves just three outcomes, since a solution — real reform of a government owned by its wealthy — can only occur in one way.

All three outcomes are possible. The first is far less likely. In my view, it’s 50-50 on the other two. (An excellent example of the third alternative is Kazakhstan.)

Professional Democrats Are the Ones At Fault

As evil as the Republicans are, this is the professional Democrats’ fault. If they weren’t so determined to make sure the left never leads today’s revolt, we’d be in better shape.

But professional Democrats have ceded leadership of the anti-wealth rebellion to the Right, which leads it duplicitously. As we stand today:

• Democrats are the party of what people are revolting against (the status quo). Biden has made explicit the duplicitous broken promise of Obama.

• Republicans are the party of lies and false solutions.

• No one represents the interests of the revolt itself, or the needs of the people engaged in it.

I don’t see either party’s leaders changing their stance. Thus the mess we see coming, or already here.

There Will Be No Chinese Century

A side note: Lest anyone worry, there will be no “Chinese Century.” The Chinese will have exactly the same problem we do. They have two “breadbaskets,” spread roughly a thousand miles apart.

The ancient near one, the one next to Beijing, the one that spawned the Han civilization in the first place, will be under water before 2100. The chaos there will be great as the chaos here.

And like the U.S. in the not-too-distant decades, China too will lose territorial integrity. 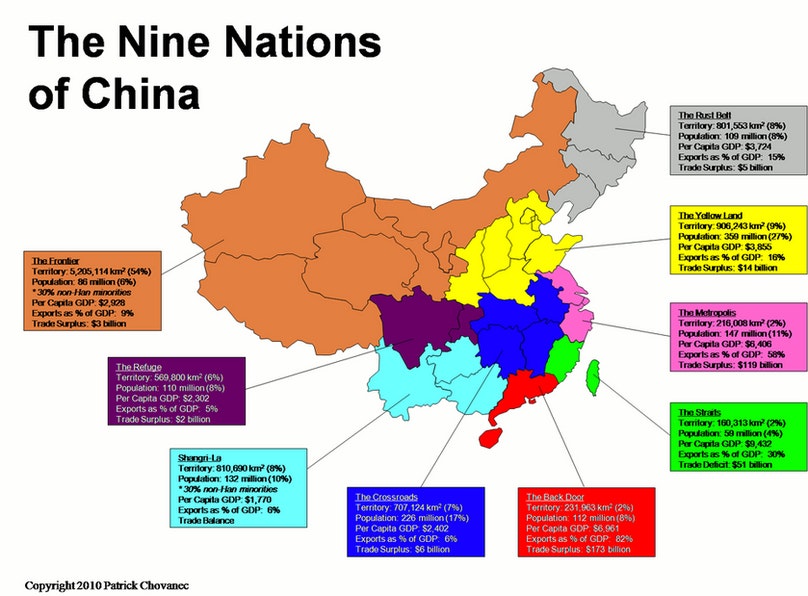