And, you know, there is no such thing as society. There are individual men and women and there are families.

In this short and simple post, I will show that we can prove Thatcher wrong, using what we have learned about airborne transmission in the current pandemic. First, I will present an experiment, and then I will show why it is disproves Thatcher (and, if one should wish to undertake the task, a lot of libertarian and libertarian-adjacent foofra about “methodological individualism” as well, although that is a task for another day).

First, the experiment. (I am using The Asahi Shimbun‘s coverage; here is the original study.) Here is a photo of the setup. 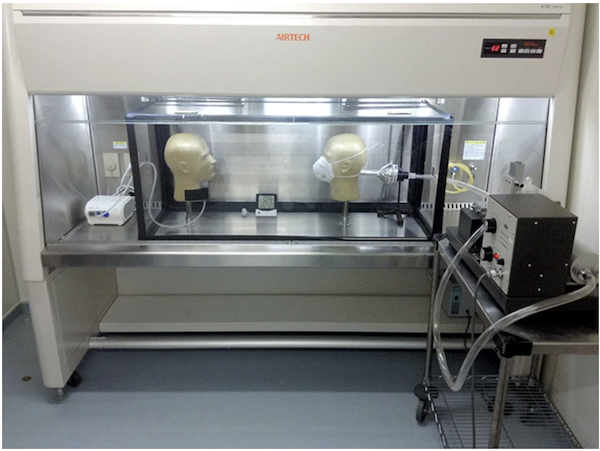 As you can see, there are two aerosol mannequins, facing each other in an enclosed space, and sharing air:

A special chamber was developed to simulate airborne transmission of the actual novel coronavirus and measure the amount of infectious droplets, which are produced by humans breathing and coughing, that pass through the mask a mannequin is wearing.

The experimenters played around with the masks, masking one, masking neither, masking both.

In the experiment, researchers placed two mannequin heads near one another facing each other. One was labeled as a COVID-19 patient and was set up to emit a mist through its mouth, mimicking a virus spreader exhaling.

The other, a “non-patient” and otherwise healthy mannequin, was connected to an artificial ventilator and equipment that let researchers detect how much of the virus it would inhale.

Note that in real world situations, since Covid transmits asymptomatically, either mannequin could be the “patient” (infected sender) and “non-patient” (healthy receiver) without knowing it. More:

A gelatin film was placed along the respiratory tract, and the amount of virus attached to it was measured.

The researchers tested a range of scenarios with three types of face masks placed on the mannequins: an N95 mask, a surgical mask and a cotton cloth mask.

When the infected mannequin wore an N95 mask, a type of mask that is not expected to be worn by a COVID-19 patient, the amount of the virus that the healthy mannequin inhaled was nearly zero percent.

When both mannequins wore a cotton mask, the amount of inhaled virus dropped to 30 percent of the amount inhaled when neither wore masks. When they both donned a surgical mask, the figure dropped further, to the range of 20 to 30 percent.

Now let’s take a short detour and ask ourselves what we mean by society. Infinite are the arguments of mages (The Economist, so-called, doesn’t even include “society” in its glossary of economic terms), so let me turn to my trusty Oxford English dictionary:

2. The system of customs and organization adopted by a body of (esp. human) individuals for harmonious and interactive coexistence or for mutual benefit, defence, etc. m16.

3. ‣a The aggregate of people living together in a more or less ordered community. Also (with qualifying adjective), a part of this. m17.

Wikipedia (sorry) defines “A society is a group of individuals involved in persistent social interaction,” which, though a bit circular, seems to amount to the same thing:

Now, let’s reframe the experiment as a model, the sort of simple model that pseudo-Nobel prize-winning economists construct. Let’s model “interactive coexistence” of humans or “persistent social interaction” as two mannequins locked in a box together, sharing air. This is, in fact, not as far-fetched a model of humanity as it seems at first. We are an indoor species:

“We spend more time in our homes, than whales spend submerged beneath the surface of the ocean,” said Dr. Richard Corsi of Portland State University, who has studied indoor air quality for 30 years. “The average American lives to 79 and spends 70 of those 79 years inside buildings.”

And unless we are Ted Kaczynski, in solitary confinement, leaving on the street, or Simeon Stylites — all surely edge cases — we spend our time indoors with others, sharing air. In other words, breathing is a social relation[2]. We have the most material social relationship possible — sharing air — between two individuals, and they do not have to be family. Ergo, Maggie Thatcher is wrong.

Note that this argument does not depend on mask quality, mask fit, or anything to do with the properties of the mask. Breathing is a social relation no matter what. Perhaps if we can be clear on this point, we could be more clear that the mask/anti-mask controversy is really a discussion of the kind of society we[3] want.

Soon it will be 2 years for my wife and I of never wearing a face mask, never getting a C19 test, never social-distancing (unless simply standing away from terrified people) and never denying ourselves sunshine and freedom of movement.

You don't have to play their game.

That is one vision of the social relation that is shared air. Here is another:

Related: 🧵 on why vaccines alone are not enough & need for a multipronged approachhttps://t.co/sVGVKQwiKn

It’s interesting to rethink the arguments for “freedom” — a word, though not a concept, I am coming to loathe — in terms of seat belts or cigarette smoking. Ultimately, seat belts became mandatory, and cigarette smoking in shared air was forbidden. Auto accidents and cancer weren’t multiplying exponentially in the space of days, however….

[1] “Joseph Allen, an associate professor and director of the healthy-buildings program at Harvard T.H. Chan School of Public Health… breaks down the math on how multiple mask wearers amplify their effectiveness. If one person wears a cloth mask, it might be 50% effective in blocking COVID-19 particles on its own. But when two people wear a cloth mask, the figure jumps to around 75%.”

[2] Even transmitting the virus is a social relation: The virus originates in the lungs of one person, and is transmitted to the lungs of a second person, via aerosols.

[3] By “we,” I do not, of course, mean “them” [joke]. As so often, conservatives are more serious about their politics than liberals. If their distrust of the professional-managerial class is total — and the PMC have performed brilliantly in achieving that level of mistrust — they don’t just whinge about it. Personally, I think the politics are wrong and the behavior can be ugly, but that’s not how they see it.