Patient readers, this Water Cooler is truncated because a post I swear I thought was going to be simple wasn’t. –lambert

“When the going gets weird, the weird turn pro.” –Hunter Thompson

We have the most frivolous, delusional, and self-centered political class in the world:

This dude is — wait for it — from the Atlantic Council. He can do all those things. We camnot:

We have the most frivolous, delusional, and self-centered professional managerial class in the world:

#NewYork artists hold a campaign with a request to make a no-fly zone over #Ukraine️ Paper airplanes, calling to stop Putin, were thrown from all the floors of @Guggenheim museum ✈️ #UkraineRussianWar pic.twitter.com/Qrq5IKbCtd

I nearly stroked out when I saw this one. Paper airplanes? To support armed confrontation with a nuclear power? Are these people little children? Do they think a No-Fly Zone happens because they wished it into existence?

“How Dark Money Shaped The School Safety Debate” [Walker Bragman, Daily Poster]. “The updated CDC guidance signals the Democratic party’s shift from beating the virus to surrendering to it as a fact of life — including in schools. The new approach was likely shaped by a number of factors, including declining COVID numbers, concerns about far-reaching public COVID fatigue, and the fact that many of those now most at risk of severe disease have refused to get vaccinated for non-medical reasons. But the end of school masking is also in part due to a campaign by right-wing business interests, including the dark money network of oil billionaire Charles Koch, to keep the country open for the sake of maintaining corporate profits. These interests have been meddling in the education debate, first pushing to reopen schools and then fighting in-school safety measures, even as COVID case numbers were rising and children were ending up in hospitals. For nearly two years, these groups have been promoting questionable science and creating wedges between parents, teachers, and administrators in order to get America back to work — even at the risk of the nation’s children…. As schools started reopening under the new Democratic administration, Koch-affiliated groups adopted a harder line. In the lead-up to the 2021 state elections, the organizations began opposing in-school mask requirements for students and teachers in addition to closures….. ‘It’s sort of surprising [or not surprising at all] to us that people want to remove some of these layered protection measures that we know work,’ said veteran pediatric emergency physician Christina Johns, senior medical advisor and vice president of communications for PM Pediatrics, the country’s largest provider of specialized pediatric urgent care.” • The whole article is worth reading in full, though if anything it’s not cynical enough. It’s certainly odd we don’t see this covered in the Post and the Times.

I have moved my standing remarks on the Democrat Party (“the Democrat Party is a rotting corpse that can’t bury itself”) to a separate, back-dated post, to which I will periodically add material, summarizing the addition here in a “live” Water Cooler. (Hopefully, some Bourdieu.) It turns out that defining the Democrat Party is, in fact, a hard problem. I do think the paragraph that follows is on point all the way back to 2016, if not before:

The Democrat Party is the political expression of the class power of PMC, their base (lucidly explained by Thomas Frank in Listen, Liberal!). It follows that the Democrat Party is as “unreformable” as the PMC is unreformable; if the Democrat Party did not exist, the PMC would have to invent it. If the Democrat Party fails to govern, that’s because the PMC lacks the capability to govern. (“PMC” modulo “class expatriates,” of course.) Second, all the working parts of the Party reinforce each other. Leave aside characterizing the relationships between elements of the Party (ka-ching, but not entirely) those elements comprise a network — a Flex Net? An iron octagon? — of funders, vendors, apparatchiks, electeds, NGOs, and miscellaneous mercenaries, with assets in the press and the intelligence community.

Note, of course, that the class power of the PMC both expresses and is limited by other classes; oligarchs and American gentry (see ‘industrial model’ of Ferguson, Jorgensen, and Jie) and the working class spring to mind. Suck up, kick down.

remember when they served Ghislaine Maxwell a subpoena when she was attending one of these? that was great https://t.co/m7SoLH4kd9

“TikTok Was Designed for War” [Wired]. “[T]he current conflict is a very different kind of social media war, fueled by TikTok’s transformative effect on the old norms of tech. Its more established competitors fundamentally changed the nature of conflict, but TikTok has created a stream of war footage the likes of which we have never seen, from grandmothers saying goodbye to friends to instructions on how to drive captured Russian tanks.” • It’s digital evidence, ideal for propaganda, especially effective against the child-like entities who manage discoure in the United States. Not a lot of weeping Russian mothers sending their children off to the front. Not a lot of steet violence from the Azov Battalion.

“The new silent majority: People who don’t tweet” [Axios]. • I frequent some nice quiet little neighborhoods on the Twitter. It’s much better at that for me than Facebook ever was (seven or eight years ago when I used it last). But my main timeline is utterly, utterly polluted by wartime propaganda. It’s completely useless to me, and therefore very useful to the powers that be. 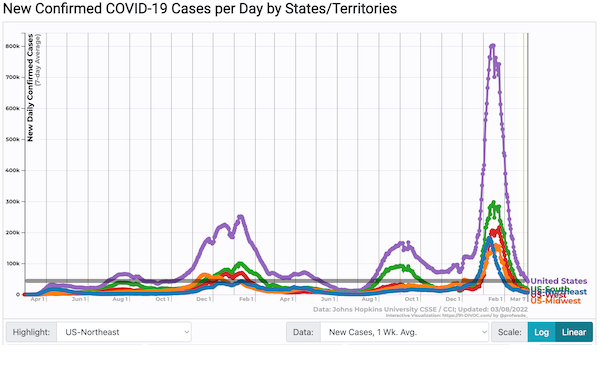 Fellow tapewatchers will note that “up like a rocket, down like a stick” phase is done with, and the case count is now leveling out. At a level that, a year ago, was considered a crisis, but we’re “over” Covid now, so I suppose not. I have added a Fauci Line.

NOTE I shall most certainly not be using the CDC’s new “Community Level” metric. Because CDC has combined a leading indicator (cases) with a lagging one (hospitalization) their new metric is a poor warning sign of a surge, and a poor way to assess personal risk. In addition, Covid is a disease you don’t want to get. Even if you are not hospitalized, you can suffer from Long Covid, vascular issues, and neurological issues. For these reasons, case counts — known to be underestimated, due to home test kits — deserve to stand alone as a number to be tracked, no matter how much the political operatives in CDC leadership would like to obfuscate it.

The official narrative was “Covid is behind us,” and that the pandemic will be “over by January” (Gottlieb), and “I know some people seem to not want to give up on the wonderful pandemic, but you know what? It’s over” (Bill Maher) was completely exploded. What a surprise! This time, it may be different. But who knows?

In the next few weeks, we’re going to find out just how much of our “immunity wall” was actually “mask immunity.”

“CDC Data: ‘Stealth’ Omicron Cases Doubling Every Week in the U.S.” [US News]. “Cases of a highly transmissible omicron subvariant are doubling in the U.S. every week, according to data from the Centers for Disease Control and Prevention. BA.2, or “stealth” omicron, was responsible for 8% of coronavirus infections in the U.S. last week, the CDC estimates. That’s up from 4% the week prior and 2% the week before that. Experts have raised concerns that the relaxation of mitigation measures like mask mandates could give the subvariant an extra advantage as it spreads in the U.S., and they have questioned if the country is doing enough sequencing to understand the true number of BA.2 infections. BA.2 is already the dominant lineage in 18 countries, according to the World Health Organization. The subvariant’s unofficial nickname of “stealth” omicron stems from a testing response that makes the lineage look like the delta variant, so it requires additional sequencing that the more common omicron subvariant did not.” • Here from CDC is the variant tracker: 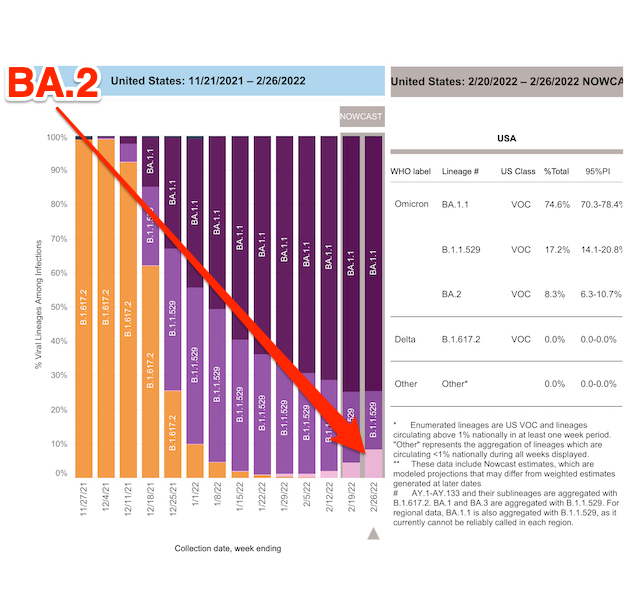 Nowcast is a model that estimates more recent proportions of circulating variants and enables timely public health action. CDC is providing weekly Nowcast estimates which will be updated every week on Tuesday.

Readers will recall that the last CDC model I encountered went very, very badly — for CDC. 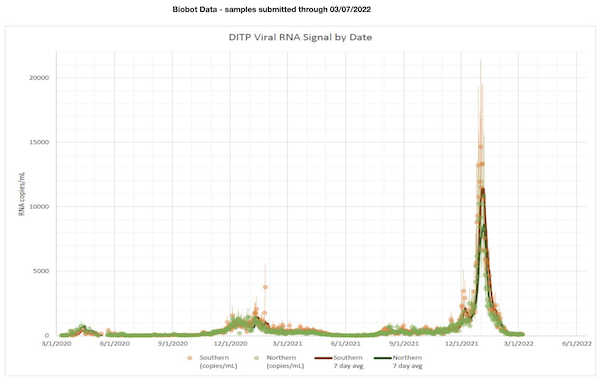 Flattened out, continues encouraging (and independent from the CDC).

The Massachusetts Water Resources Authority (MWRA) service area includes 43 municipalities in and around Boston, including not only multiple school systems but several large universities. Since Boston is so very education-heavy, then, I think it could be a good leading indicator for Covid spread in schools generally. 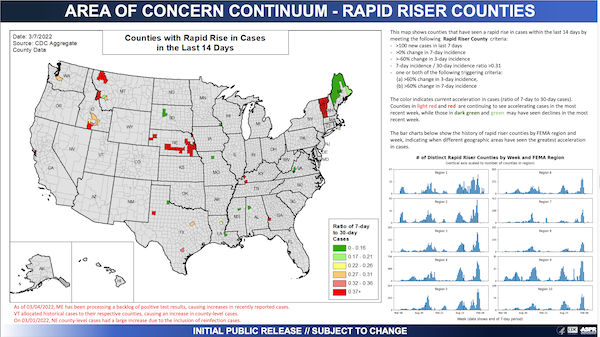 Those notes in red at the bottom make me wonder about what else is wrong. (Remember that these are rapid riser counties. A county that moves from red to green is not covid-free; the case count just isnt, well, rising rapidly.) 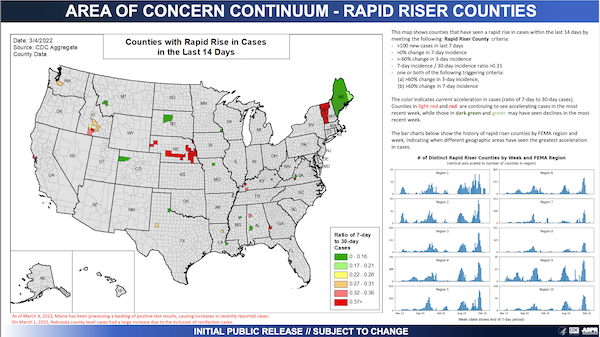 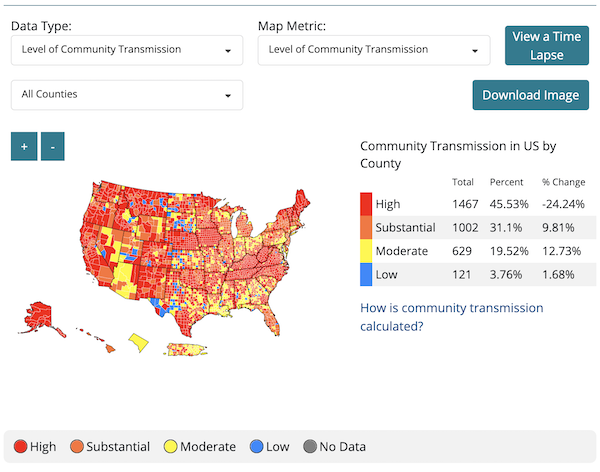 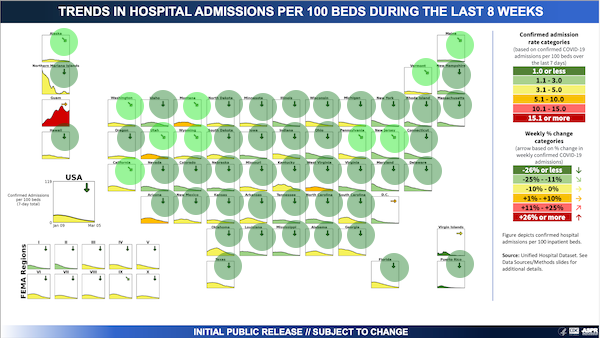 Sea of green still. From the point of view of our hospital-centric health care system, green everywhere means the emergency is over (and to be fair, this is reinforced by case count and wastewater). However, community transmission is still pervasive, which means that long Covid, plus continuing vascular damage, are not over. (Note trend, whether up or down, is marked by the arrow, at top. Admissions are presented in the graph, at the bottom. So it’s possible to have an upward trend, but from a very low baseline.)

Death rate (Our World in Data): 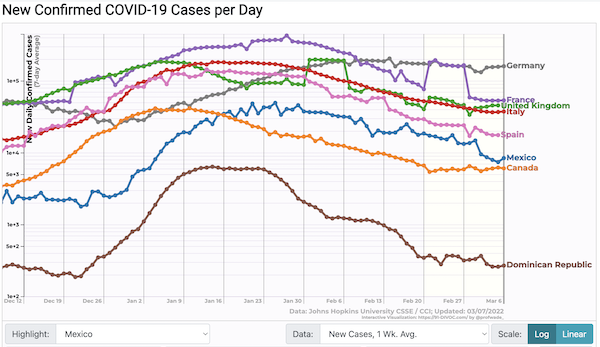 Total: 985,914 . Heading downward. I have added an anti-triumphalist Fauci line. 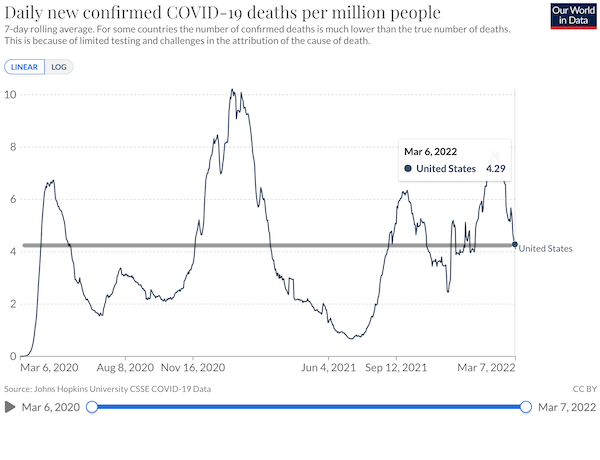 Contact information for plants: Readers, feel free to contact me at lambert [UNDERSCORE] strether [DOT] corrente [AT] yahoo [DOT] com, to (a) find out how to send me a check if you are allergic to PayPal and (b) to find out how to send me images of plants. Vegetables are fine! Fungi and coral are deemed to be honorary plants! If you want your handle to appear as a credit, please place it at the start of your mail in parentheses: (thus). Otherwise, I will anonymize by using your initials. See the previous Water Cooler (with plant) here. Today’s plant (LR):

LR writes: “I’m camping here for 9 days including Christmas and New Year’s. It is summertime and the weather is beautiful. The waves are a bit rough at the beach and the sun is intense, but there are lovely breezes. Here in this national park as if one is camping within a colony of birds. The park is covered with eucalyptus trees which are full of nests for a variety of parrots. You hear the birds constantly, but in the morning, when the sun comes up, they go crazy!! And then the sun hits the tent and it is time to get up!! Happy Holidays a todos!” I should have gotten to this earlier, but perhaps it will bright the month of March!