Conventional wisdom says that Emmanuel Macron will beat Marine Le Pen in the second round of French Presidential elections on April 24. Having said that, Macron is exposed to some risks that could set him back and propel Le Pen to an unexpected win. French and EU readers, who are almost certainly better informed, are encouraged to correct me as I work though some of the issues.

On a very simpleminded basis, a development that may dim Le Pen’s prospects is that the momentum she had been showing appears to have stalled out as the first round closed. Le Pen has been taking ground against Macron in recent weeks, as this FiveThirtyEight tally shows: 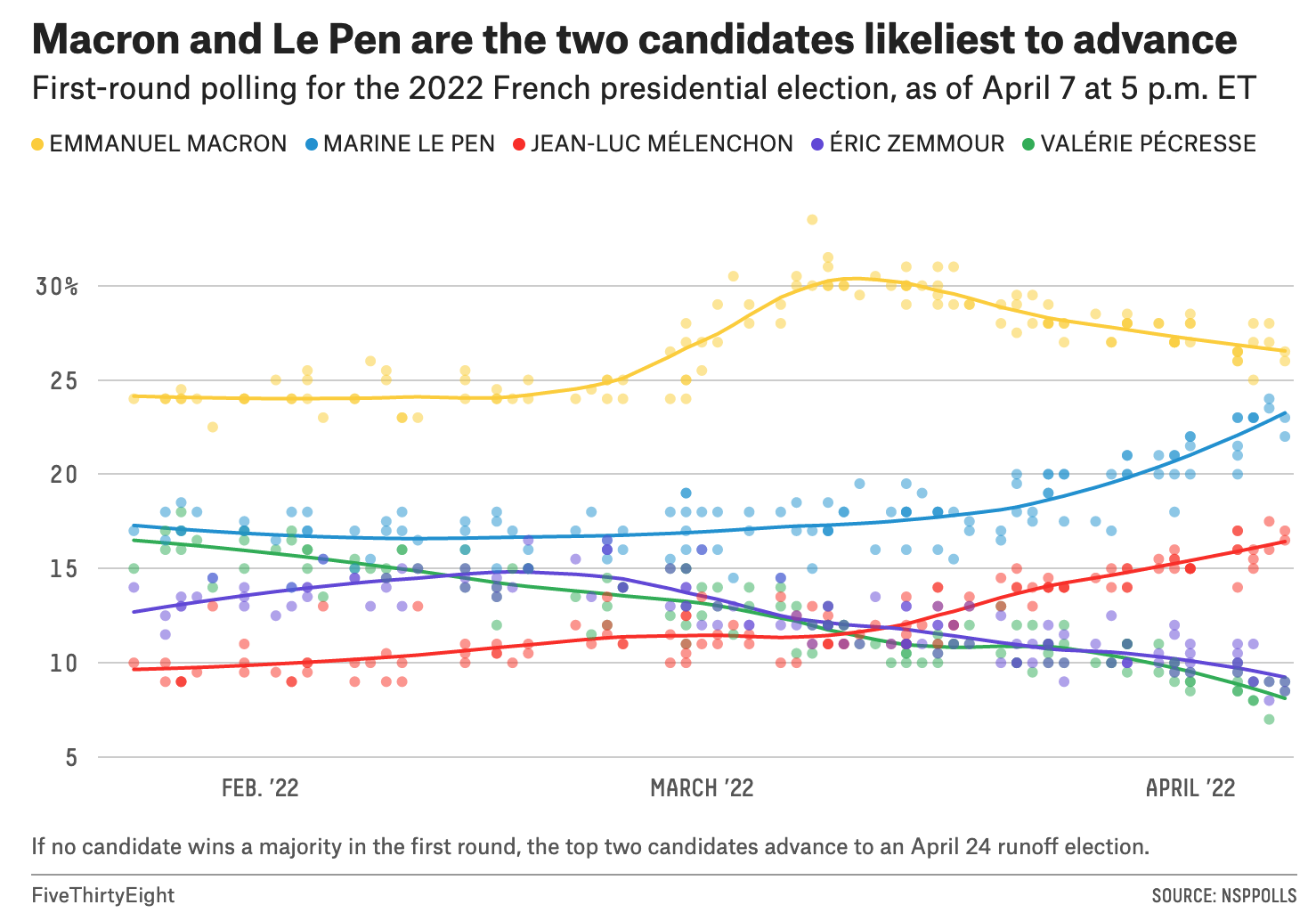 The penultimate poll showed Le Pen lagging Macron by 3%-4% in the runoff and one right before the balloting started, from polling firm Elaba, of over 1800 voters, showed an only 1% gap, at 26% for Macron versus 25% for Le Pen. This is the actual tally: 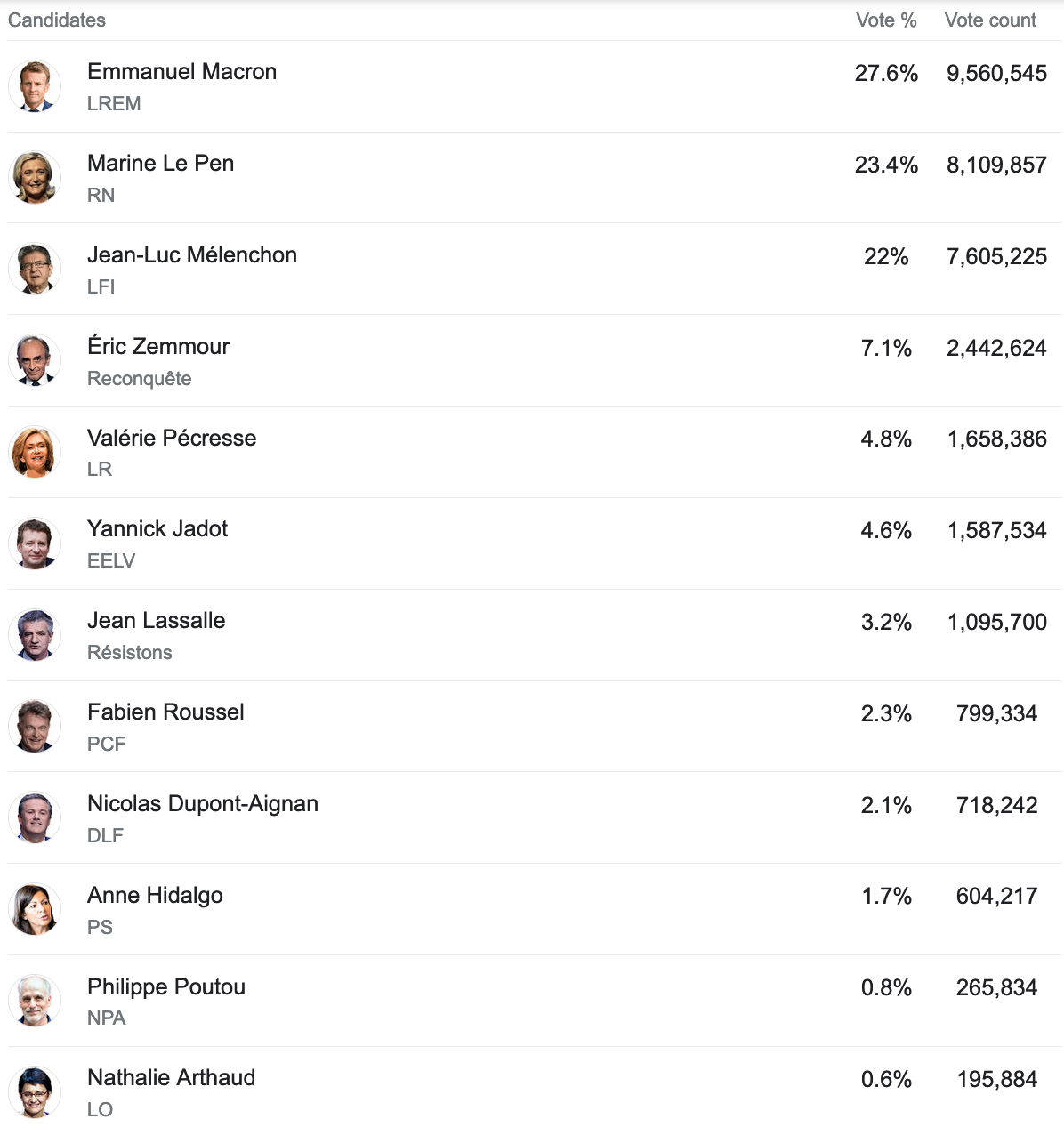 So Le Pen was more than 4 points behind Macron, which was at the low end of pre-election poll averages. Admittedly this deviation is still well within sampling error, but those who hoped for a French version of “shy Trump” poll respondents will be disappointed.

However, other factors make clear that Le Pen is very much a real contender. The first is that the the rabidly anti-immigrant Zenmour’s voters have no where else to go and were certain to back Le Pen independent of his endorsement. Center-right Pécresse recommends that her fans vote for Macron. Pécresse has been making anti-immigrant dog whistles, so I would not expect all of her supporters to go for Macron.

YouGov, which recall was the one pollster to predict that the Brexit referendum would succeed, and has continued to be very reliable in the UK, finds only a 2% margin for Macron in a second round, which New Statesman called “a statistical dead heat”. YouGov also looked at how voters for the other candidates are likely to break in the second round. One key finding is that a substantial proportion of Mélenchon voters would back Le Pen in a second round. From New Statesman:

However, YouGov projected that Zenmour would come in at 13% when he garnered only 7% while it forecast Mélenchon at only 16%, versus the 22% he scored yesterday. Even though YouGov anticipates Mélenchon voters will split 55% Macron v. 45% Le Pen, that’s way short of the pretty much 100% of Zenmour followers going for Le Pen.

New Statesman nevertheless argues that Macron has topped out, while Le Pen has more potential headroom:

“All our data suggests the second round is now too close to call,” said Paul Hilder, the founder of Datapraxis. “Le Pen’s reserves – people on the fence for the second round, but who think Macron would be worse – are more positive about her and could mobilise more easily, while Macron’s supposed reserves – many left voters amongst them – mostly hate him too. He is close to his ceiling, but she has room to grow. Whatever happens, this will be the best result ever for the French far right.”

The debate. At the end of the first round in 2017, Le Pen did better against Macron than she did yesterday, less than 3% behind then versus over 4% now. But she had a disastrous debate performance and got only 34% in the second round. Le Pen has allegedly greatly improved since then as a politician. But from what I can tell from the press, she still gets prickly when asked about Putin,1 and if she defaults to that in a debate, it’s pretty sure to hurt her.

Sounds of energy pain from Germany. France gets less than 20% of its gas from Russia, so immediately, its biggest exposure is to diesel shock, which will still hit fishermen, truckers, and commuters with long drives. However, Germany’s tiered energy emergency scheme calls for businesses to suffer cutbacks early on and some major firms are warning of large, permanent losses. A big slowdown in Germany would have to pull France down too. Loud warnings that dark economic times are coming soon to Germany could cool already tepid enthusiasm for Macron.

French NATO officials or diplomatic types being captured by Russia or found dead at the Azovstal steel mill in Mariupol.

Everything in Mariupol is a bit fuzzy but from the best I can infer, about 4000 Ukrainian troops remain and they have been pushed back into the industrial areas of town near the port, with the biggest holdout group at the enormous Azavstal iron and steel works. Macron had called Putin twice about a “humanitarian” evacuation, the second time on March 29. Putin agreed, on the condition that any armed forced members lay down their arms. That was a non-starter.

In the meantime, Ukraine has attempted a number of helicopter rescues of the factory, with if I am counting correctly, five shot down. At this point, helicopters and helicopter pilots are scarce resources for Ukraine, so whoever they are trying to extract from the factory is high value. There was a crazy-sounding report yesterday, except it did come from the Russian Ministry of Defense and the MoD strikes me as too unimaginative to have come up with the “I am maniac” message from a cargo ship attempting to evacuate members of the Azov Battalion from the steel factory.

Now what does this have to do with France? There are reports and images of one of the downed helicopters having two dead men with French ID. The rumor is that there are other furriners in that factory. A Russian Duma deputy winked and nodded that 100 might be a good number, that they were NATO instructors, and there were daily negotiations with them about their exit. Clearly there is a fundamental impasse if these talks have been going on that long.

If these non-Ukraine operatives are indeed NATO employees, as opposed to mercenaries, this would put a lot of egg on the face of NATO and the individual countries that sponsored them. It would also explain why Russia has not stormed the factory. These targets would have huge value to them alive, both as a discussion topic at the UN Security Council and later in Russia’s planned war crimes trials.

And if these trapped men of mystery are captured before the election and are French and operating in some sort of official capacity, that won’t help Macron.

So stay tuned! A lot can happen in the next two weeks.

1 Putin said something taken as nice about her, “She’s a woman of her convictions” (mind you, the same could be said of Russia’s current number one enemy Victoria Nuland) and a Russian bank lent Le Pen’s campaign money, which is widely depicted as tantamount to Putin lending her money, when Putin is not personally responsible for every action taken in Russia.